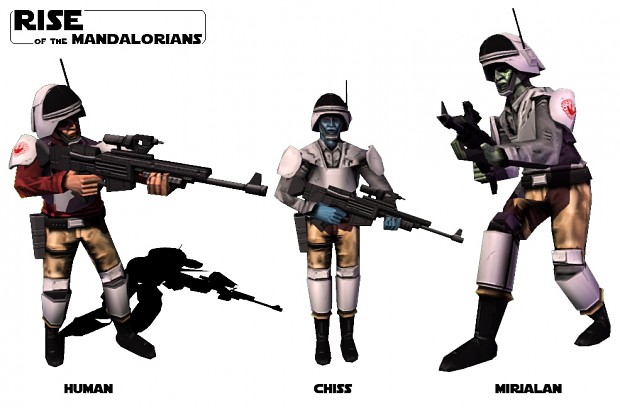 Artist's note: I realize the weight paints near the clavicle are off... Hence the stretching of the shoulder texture and the pinching of the mesh near the armpits. This is being fixed.

The quality of this mod is still mindblowing. Can't wait to play it when it's done. Keep up the great work! :)

Thank you! I can't wait to be done so ya'll can play it!! Seriously, I look forward to release as much as anyone :)

You made me really, really happy.

I had your previous comments in mind when I decided to do this. Lol

Cool :)
The A280 is my favorite Sci-Fi weapon of all time and it's awesome to finally see it in this game in it's full beauty.

Yup, those look great. And troopers of different alien races are a cool idea I never thought about. Though the majority will still be human, right?

The New Republic is an equal opportunity employer.

This mod takes place right before the Vong War right? I thought the Chiss were still very wary of the New Republic at this point and maintaining a strict isolationist attitude. That was why Jag Fel's Chiss squadron created such a stir when they joined the war against the Vong. Why then, are there Chiss soldiers among NR forces?

That Chiss soldier will be a pretty rare unit...like, one in each deployment or something. While the Chiss, like the Hapans, Corporate Sector and others were largly isolationist and even leaning toward xenophobic, there were few members who ventured out and made lives for themselves outside their home sectors. Heck, even the bartender in Jedi Knight 2 was Chiss after all ;)

You are right though, largely. Even Thrawn was ostracized by other Chiss for deciding to fight for the Empire rather than the Expeditionary Force. He wasn't well liked among his own people...

Ah. I gotcha. Y'all have obviously thought this through fairly thoroughly. Great job thus far and I look forward patiently to the finished product.

OMG... I never realized that the bartender was Chiss before... I must have logged over 400 hours on that game too... wow.

You know, for a second there, that Mirialan looked incredibly zombie-ish. I was slightly confused for a second.

The Flood seems more like a weird space-flight-capable disease that co-opts the corpses of dead things (similar to the actual parasite/fungus/thingishthing that does that in real life).

This guy just looks like your average zombie. Though, he seems to be holding together rather well for a zombie.

I love you so much, I will name my firstborn after you!

You'll name your firstborn Farseer? Actually, that sounds rather awesome.

The quality of your creations is as always, professional.

Each time I see the final work I am impressed.

Can't wait to see it finished.

should just give them a face mask, like the force unleashed troops. But Cool great job.

Really really awesome work! Finally we'll have non-humans fighting for the Rebellion like they should be! I got to ask, though, why there aren't any Mon Cals. I would've thought that they'd be front and center for the Rebels but then again I guess their model might be a little harder to incorporate.

Cause they're all in the navy ;)

There are literally hundreds of species that fight for the New Republic. I can hardly incormporate them all :)

I just figured that Sullustans and Twileks would be easy because their basic features are close to human. Then Bothans because they are key allies of the Rebellion and the subsequent NR. Rodians because I like them and they are clearly alien but have humanoid bodies. Lol. Lastly, Wookies because...wookies.

Cool, its about time that the Rebellion gets more than just human soldiers!

I'm sure you get this a lot, but when is the next version of the mod due?

Can't wait :D I can't tell you how much I appreciate a Mandalorian game that uses the old canon ^_^ and I think you do an awesome job of representing it.

Thank you for the feedback everyone!

This is a very quick picture of the final NR Soldier model. Threw in two of the non-human variants as well but there will also be Twi'lek, Rodian, Sullustan, and Wookie (Wookie variants will not wear the standard armor).

Further, the BlasTech A280 that's featured here will be one of three weapons in a squad. The DH-17 will also be featured as well as the Wookie Bowcaster for Wookie units only.