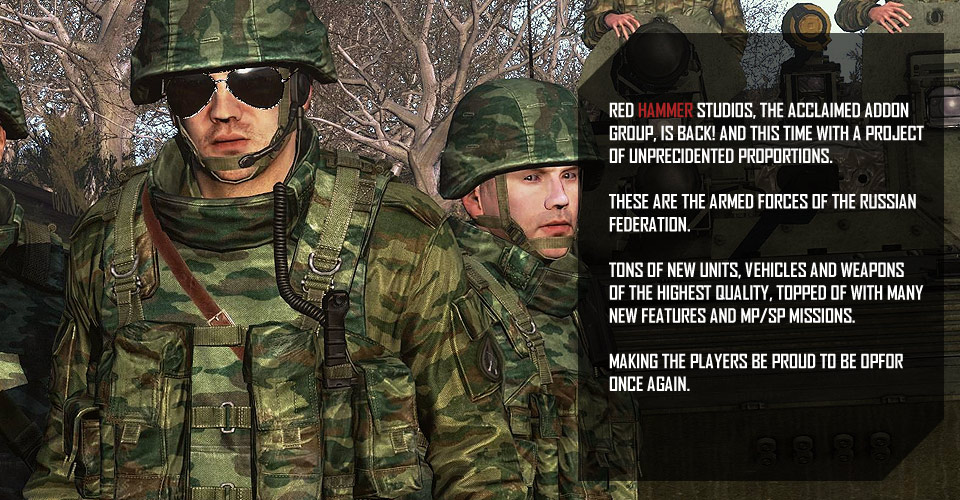 Opening of the Arma 3 mod page.

Dear supporters and watchers, we would like to announce that we have finally created the Arma 3 pages for this mod as well as the no-so-long-ago announced United States Armed Forces mod. Come visit and subscribe there for regular updates:

AFRF
USF
Also don't forget to follow us on Facebook. There we also post more frequent WIP updates. If you loved RHS: AFRF for Arma 2, you are going to be absolutely blown away with whats in store for Arma 3!

Happy holidays and first screens of 0.2!

The Red Hammer Studios team would like to wish you all pleasant holidays and show the first official screenshots of 0.2!

Version 0.1.5 of the RHS: AFRF mod is out and brings along the long awaited ACE mod compatibility!

First version of the highly anticipated mod for Arma 2: Combined Operations is released!

Pls help!!How can I spawn soliders from this mod and play as them im my missions?

congrats on your win, well deserved!

do you guys plan on making the smerch?

Don't forget to vote for them in the MANW contest!

This is most likely what some would consider a peasant question, but how can I install this mod?

What's the song that plays in the menu screen in Chernarus?

Guys are we still alive? It's been a really long time since the last update.

Yes we are! Sorry for the quiet time, we've moved to A3 and are in full swing of bringing the mod over and adding very cool new things. We don't have a new mdb page for it yet, BUT you can keep up with our devblog on facebook: Facebook.com

I'd like too see an update for ArmA2 RHS too. Especially the T-80U.

Absolutely brilliant. I can clearly see how much time was spent on it.