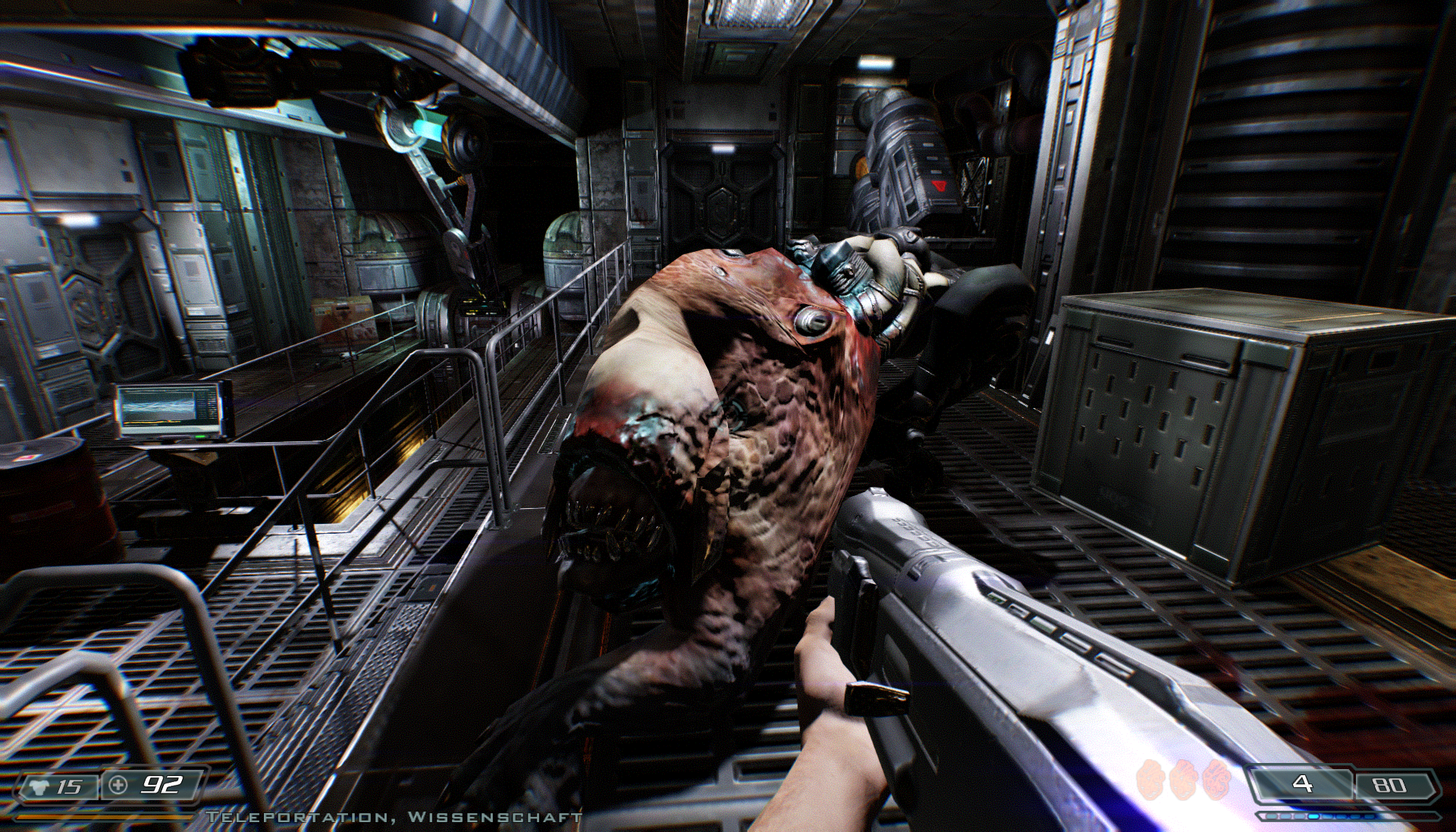 This release fixes the darkness of Doom 3 and makes the game look more similar to Dead Space and Doom 2016 without adding new textures and materials. RBDOOM-3-BFG 1.3.0 presents Doom 3 BFG in a fresh look and you will be impressed how much beautiful artwork was in Doom 3 which you haven't seen before because the lighting was all pitch black. The original main goal of this 1.3.0 release is enabling modders the ability to make new content using up to date Material & Lighting standards. Adding PBR is a requirement to make the new content look the same in RBDOOM-3-BFG as in Blender 2.9x with Cycles or Eevee and Substance Designer. PBR became the standard material authoring since 2014. Many texture packs for Doom 3 like the Wulfen & Monoxead packs were made before and are heavily outdated. With this release modders can work with modern tools and expect that their content looks as expected.

However the PBR implementation is restricted to standard PBR using the Roughness/Metallic workflow for now. Specialized rendering paths for skin, clothes and vegetation will be in future releases.

Implementing Physically Based Rendering (PBR) in Doom 3 is a challenge and comes with a few compromises because the Doom 3 content was designed to work with the hardware constraints in 2004 and that even meant to run on a Geforce 3.

The light rigs aren't made for PBR but it is possible to achieve good PBR lighting even with the old content by tweaking the light formulars with a few good magic constants. However I also want to support the modding scene to allow them to create brand new PBR materials made with Substance Designer/Painter or other modern tools so multiple rendering paths have been implemented.

PBR allows artists to create textures that are based on real world measured color values and they look more or less the same in any renderer that follows the PBR guidelines and formulars.

Doom 3 BFG is a big game. Doom 3, Resurrection of Evil and Lost Missions sum up to 47 big single player levels with an average of ~60 - 110 BSP portal areas or let's call them rooms / floors. Each room can have up to 50 shadow casting lights and most of them are point lights. I needed a good automatic solution that fixes the pitch black areas without destroying the original look and feel of the game. I also needed to add environment probes for each room so PBR materials can actually reflect the environment.

So RBDOOM-3-BFG comes with 2 systems to achieve this and both are automatic approaches so everything can be achieved in a reasonable amount of time. The first system are environment probes which are placed into the center of the rooms. They can also be manually tweaked by adding env_probe entities in the maps. They use L4 spherical harmonics for diffuse reflections and GGX convolved mip maps for specular reflections. The second system refines this by using a light grid for each room which provides a sort of a localized/improved version of the surrounding light for each corner of the room.

RBDOOM-3-BFG 1.3.0 brings back the Quake 3 light grid but this time the grid points feature spherical harmonics encoded as octahedrons and it can be evaluated per pixel. This means it can be used on any geometry and serves as an irradiance volume. Unlike Quake 3 this isn't radiosity which is limited to diffuse only reflections. The diffuse reflectivity is built using all kinds of incoming light: diffuse, specular and emissive (sky, light emitting GUIs, VFX). 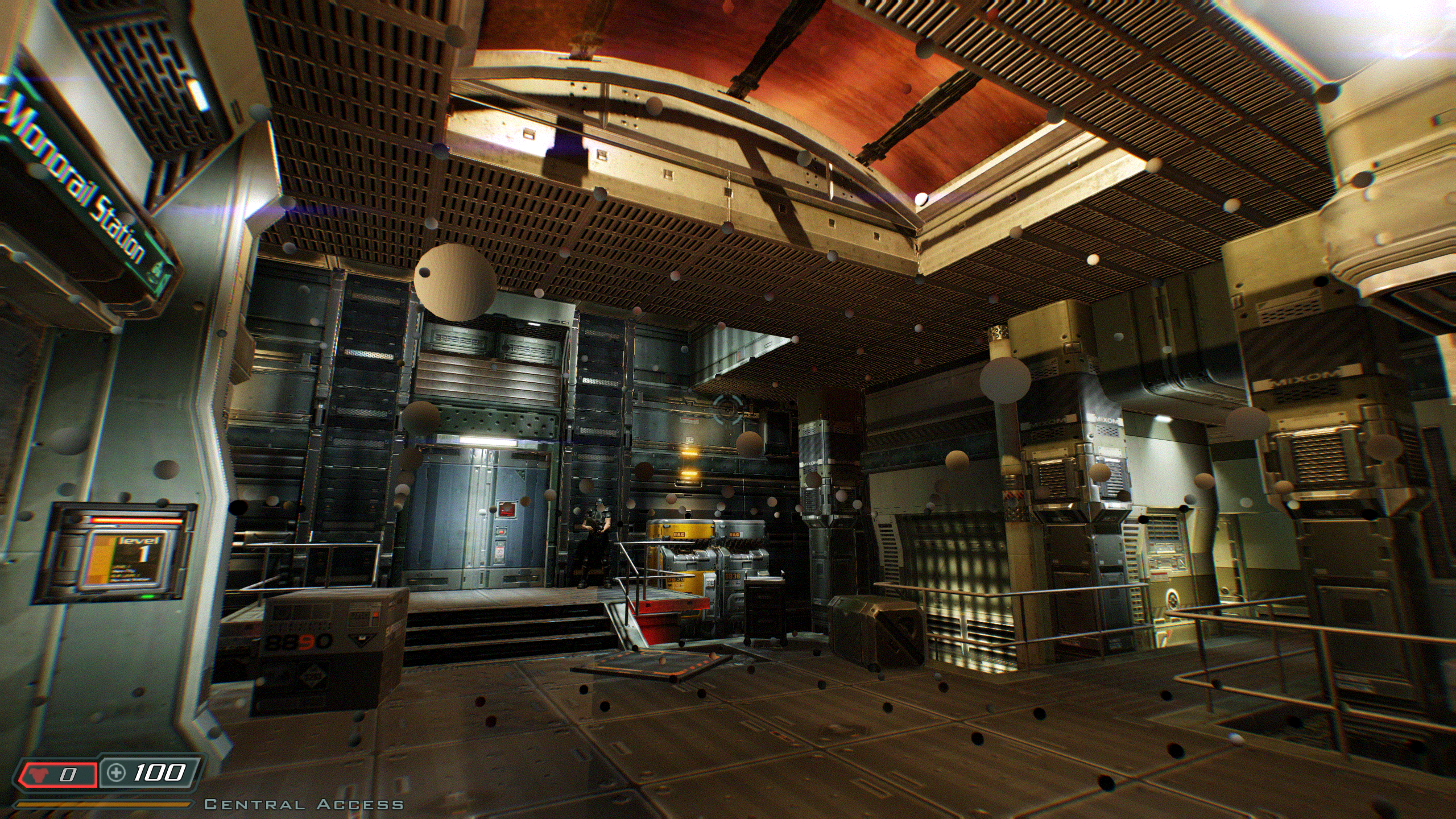 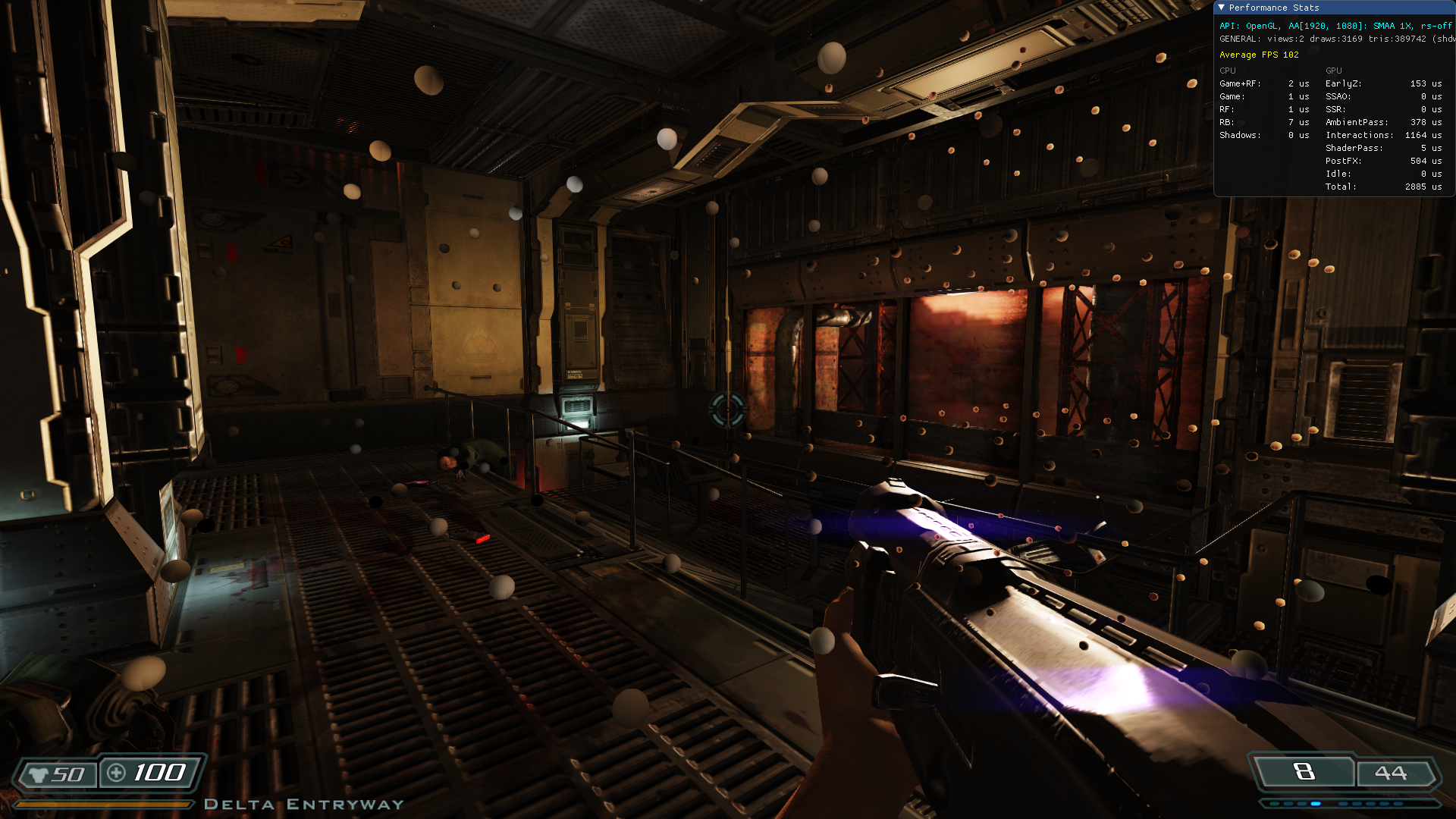 Lightgrids can be baked after loading the map and by typing:

This will generate a .lightgrid file next to your .map file and it will also store a light grid atlas for each BSP area under env/maps/<path/to/your/map/>

The Quake 3 approach wouldn't work with Doom 3 because the maps are too big and it would result in up to 800k probes for some maps or the grid density would very coarse.

RBDOOM-3-BFG uses the bounding size of the BSP portal areas and puts smaller light grids into those BSP areas. 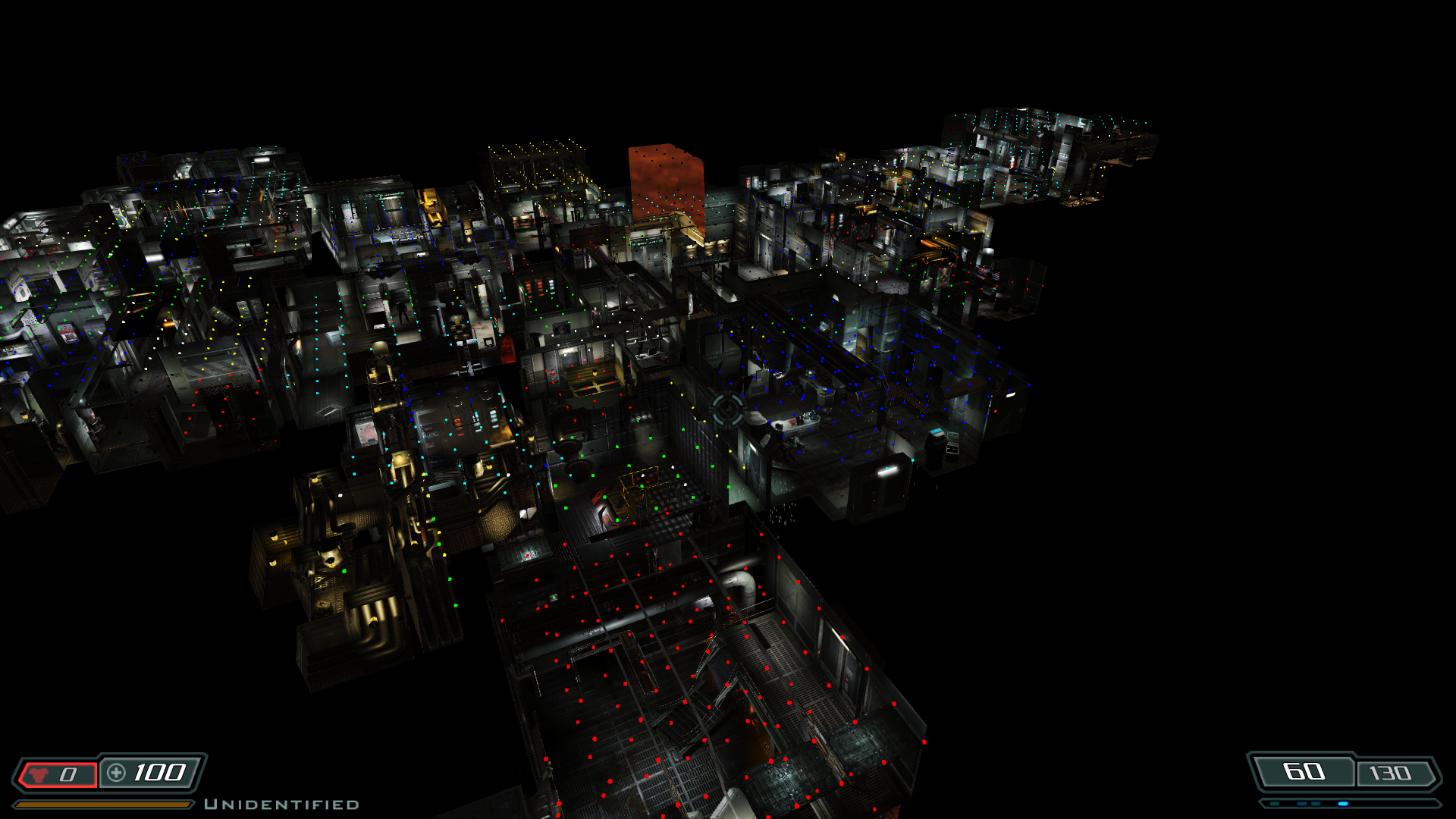 This way we can maintain a good grid density and avoid wasting storage because of light grid points that are in empty space.

code-line" wrote: But what is an Irradiance Volume or Light Grid exactly?

<p><p><p>It tells each model or lit pixel how the indirect diffuse lighting is coming from any direction. The Probulator page by Yuri O'Donnell has some good examples:</p> <p data-line="89">Left: The captured view using a panorama layout. Right: The Diffuse lighting using Level 4 Spherical Harmonics aka Irradiance.

Now think of this for each of the grid points in RBDOOM-3-BFG. If a model is placed between those probes the lighting will be interpolated by the nearest 8 grid points similar like in Quake 3.

Quake 3 only stored the dominant light direction, the average light color of that direction and an ambient color term for each grid point. In RBDOOM-3-BFG you basically can have the diffuse lighting information for any world space direction instead. This is a way more advanced technique.

Image Based Lighting and Environment Probes

If a level designer doesn't put any env_probe entities into a map then they are automatically distributed through the map using the BSP area bounds and placed in the center of them.

Environment probes can be computed after loading the map and by typing:

This will generate EXR files in env/maps/<path/to/your/map/>.

If you haven't downloaded the additional baked light data from the RBDOOM-3-BFG ModDB Page and just run RBDOOM-3-BFG.exe with the required DLLs (or you built it yourself) it will use an internal fallback. RBDOOM-3-BFG.exe has one prebaked environment probe that is compiled into the executable. 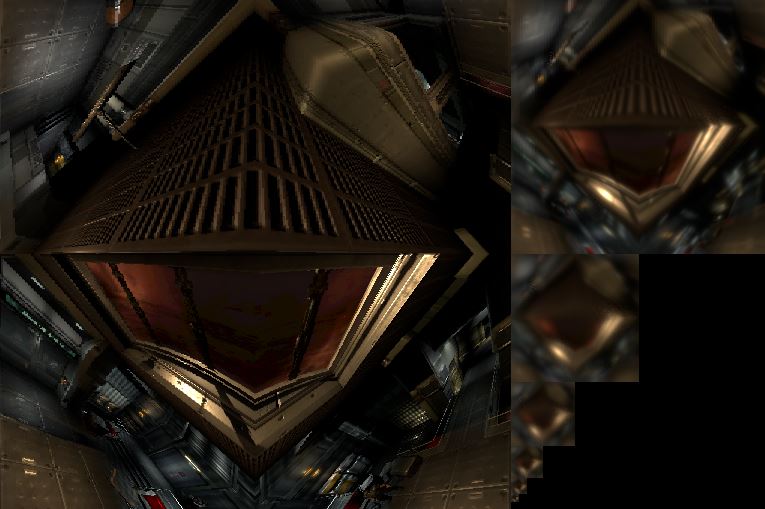 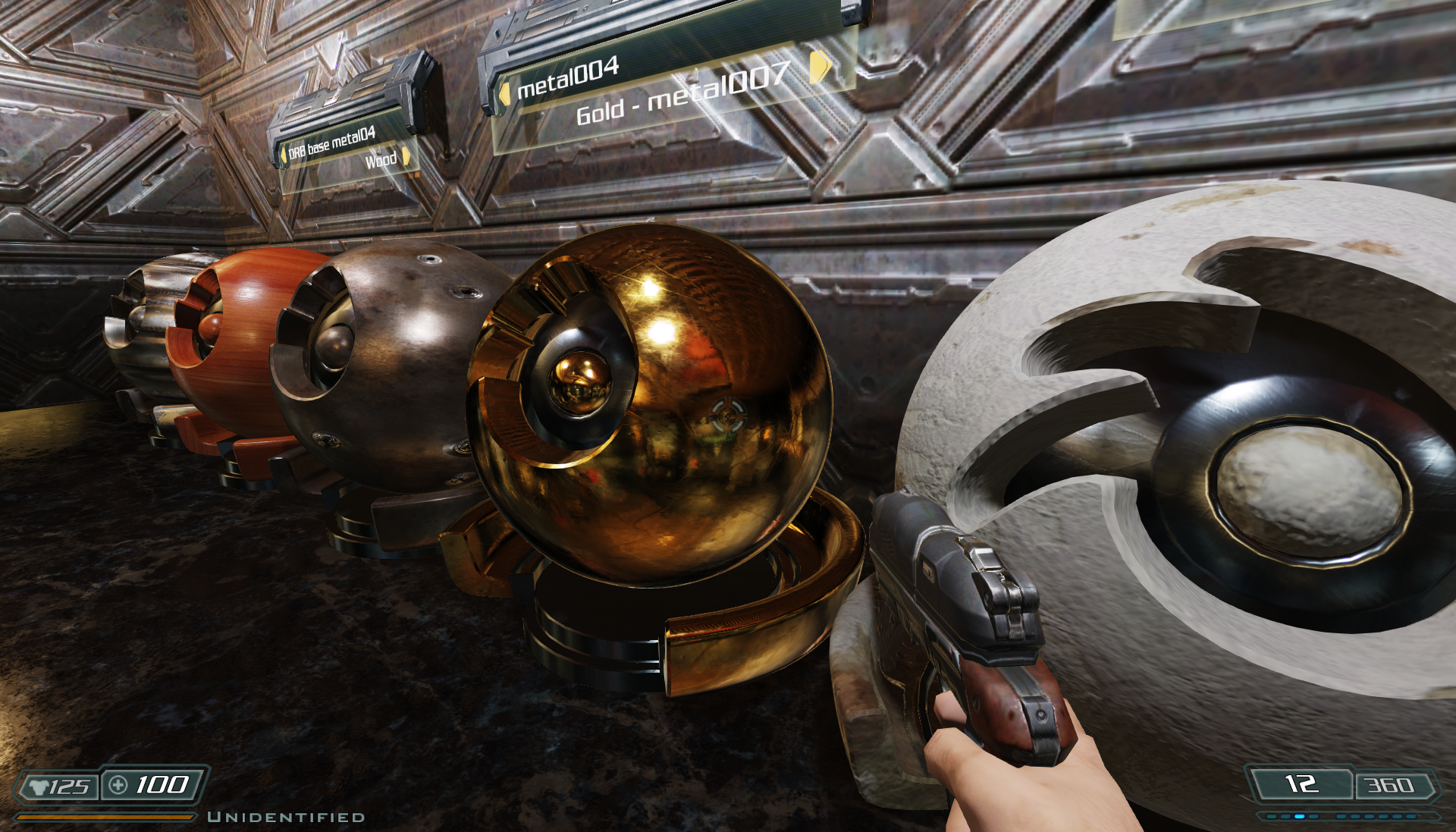 It's the light data from the Mars City 1 lobby in the screenshot above. Using this data for the entire game is inacurrate but a better compromise than using a fixed global light direction and some sort of Rim lighting hack like in version 1.2.0. The default irradiance / radiance data gives the entire game a warmer look and it fits for being on Mars all the time.

Some Examples of Indirect Lighting 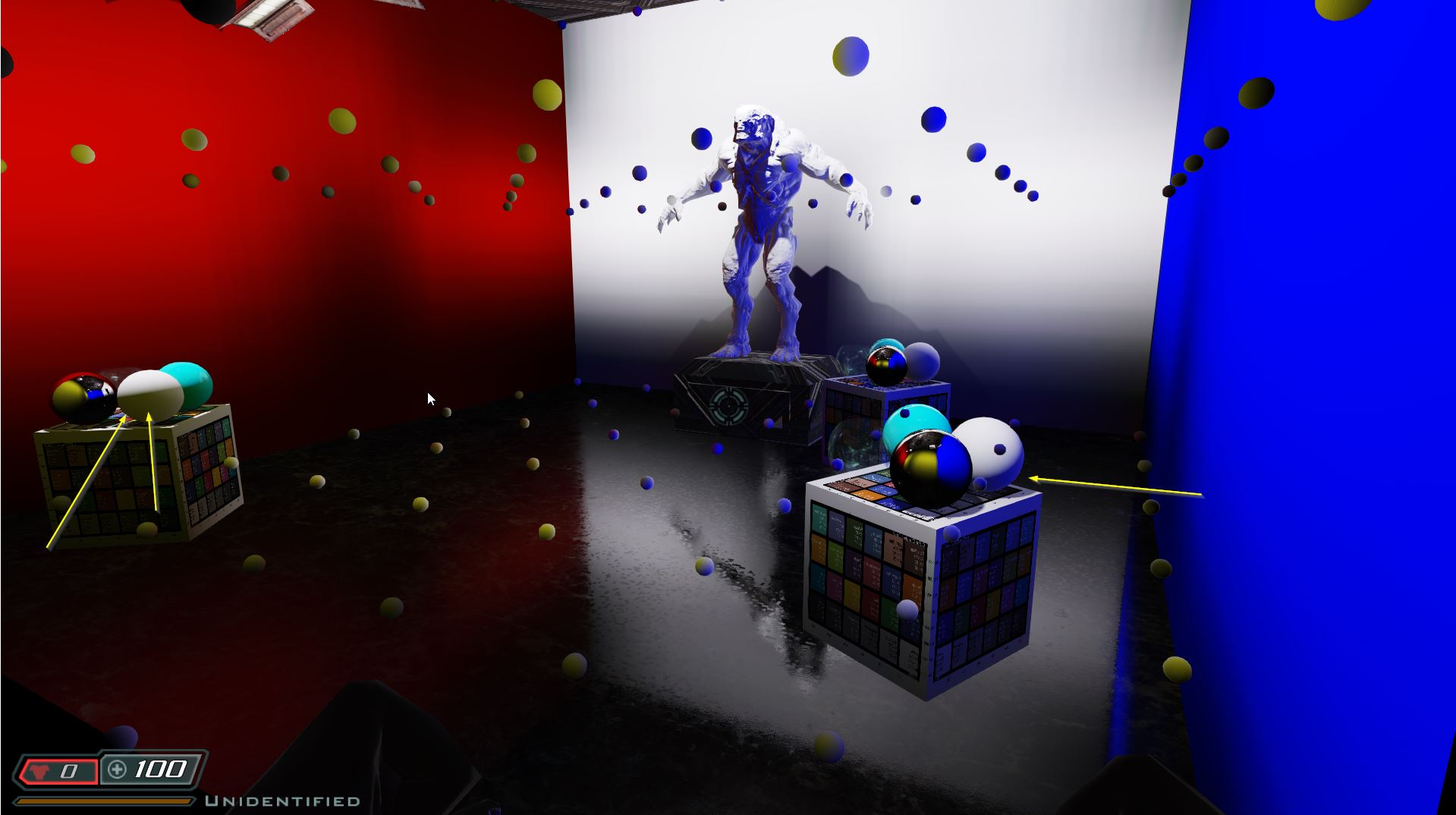 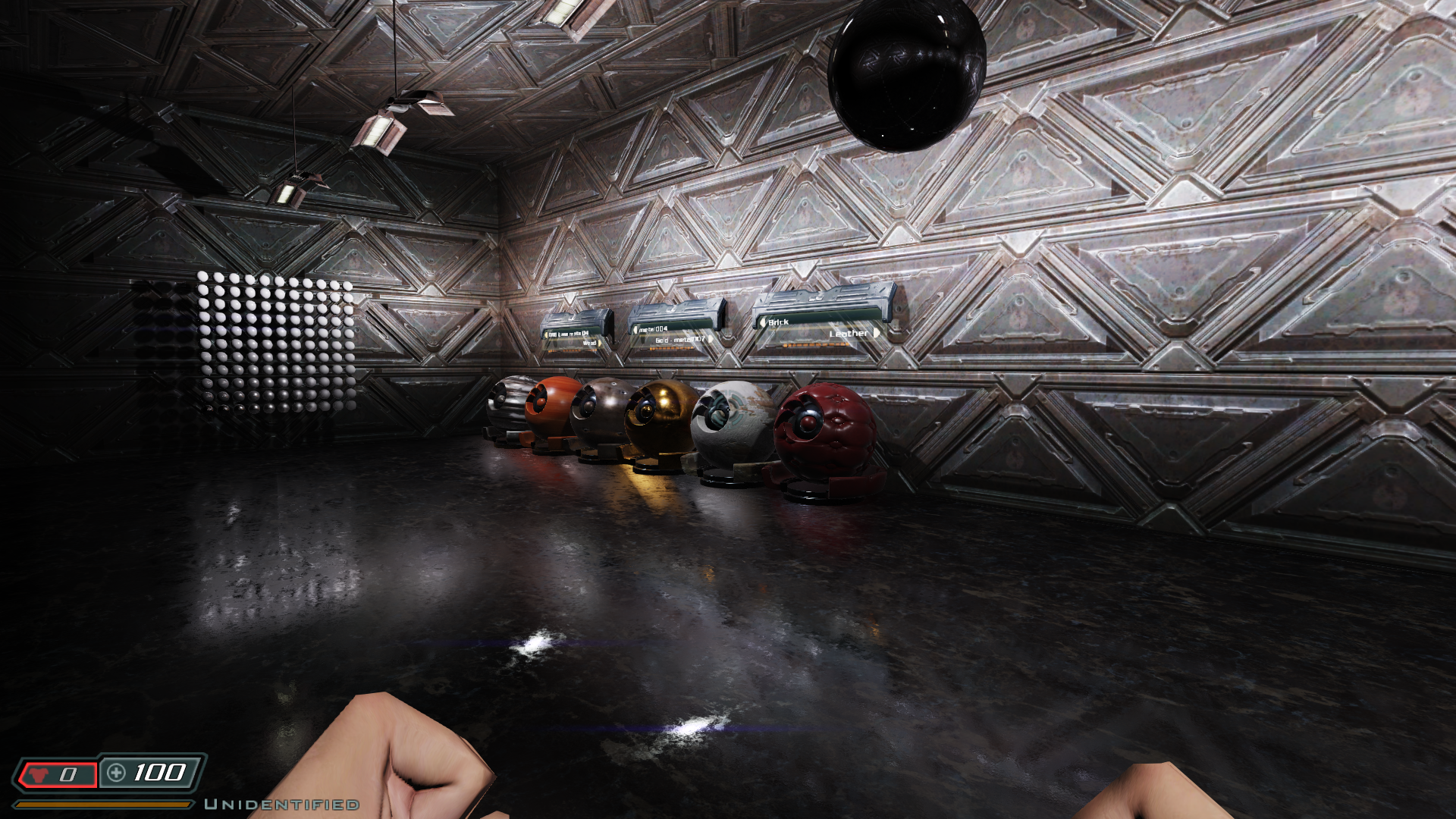 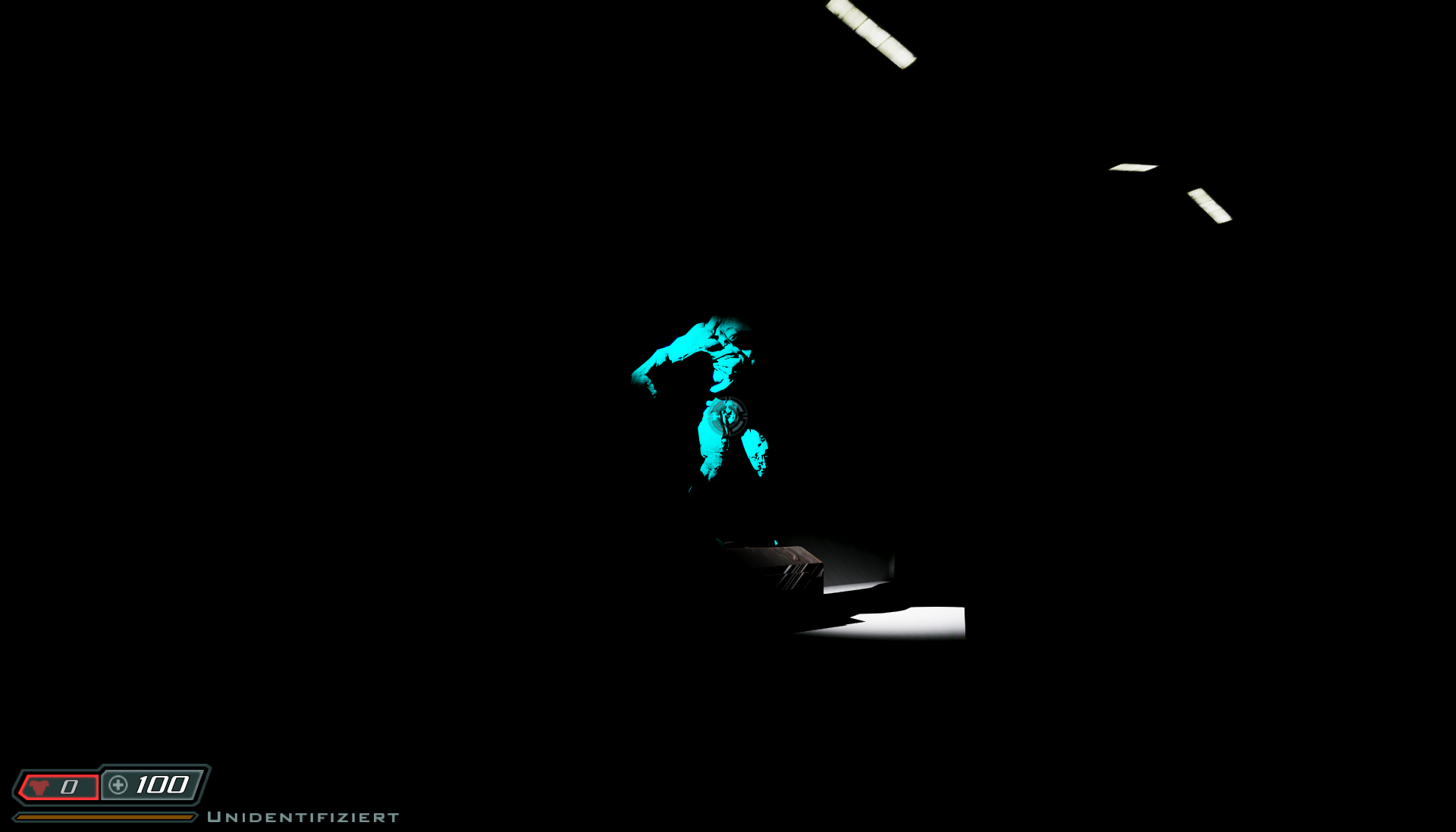 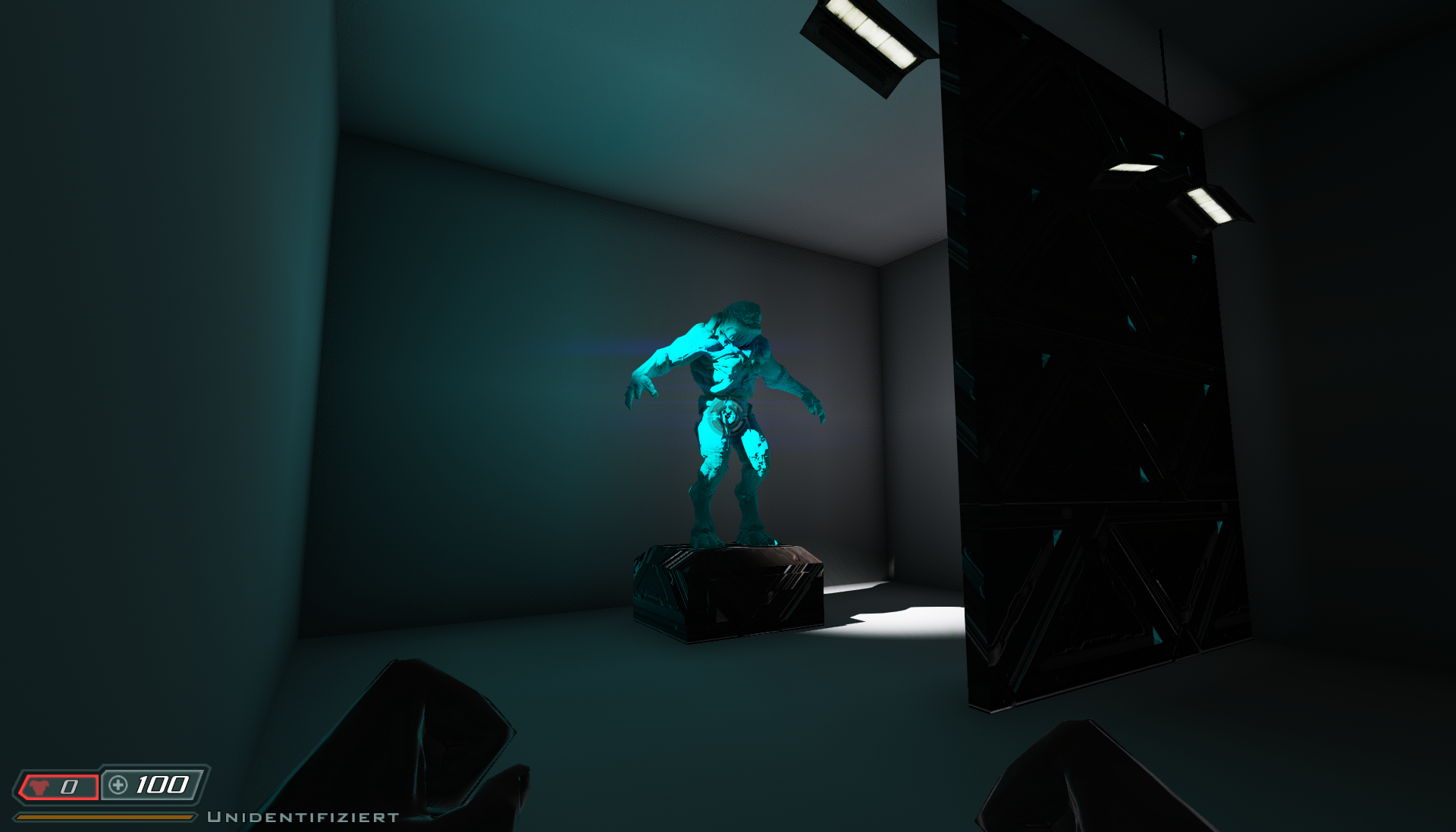 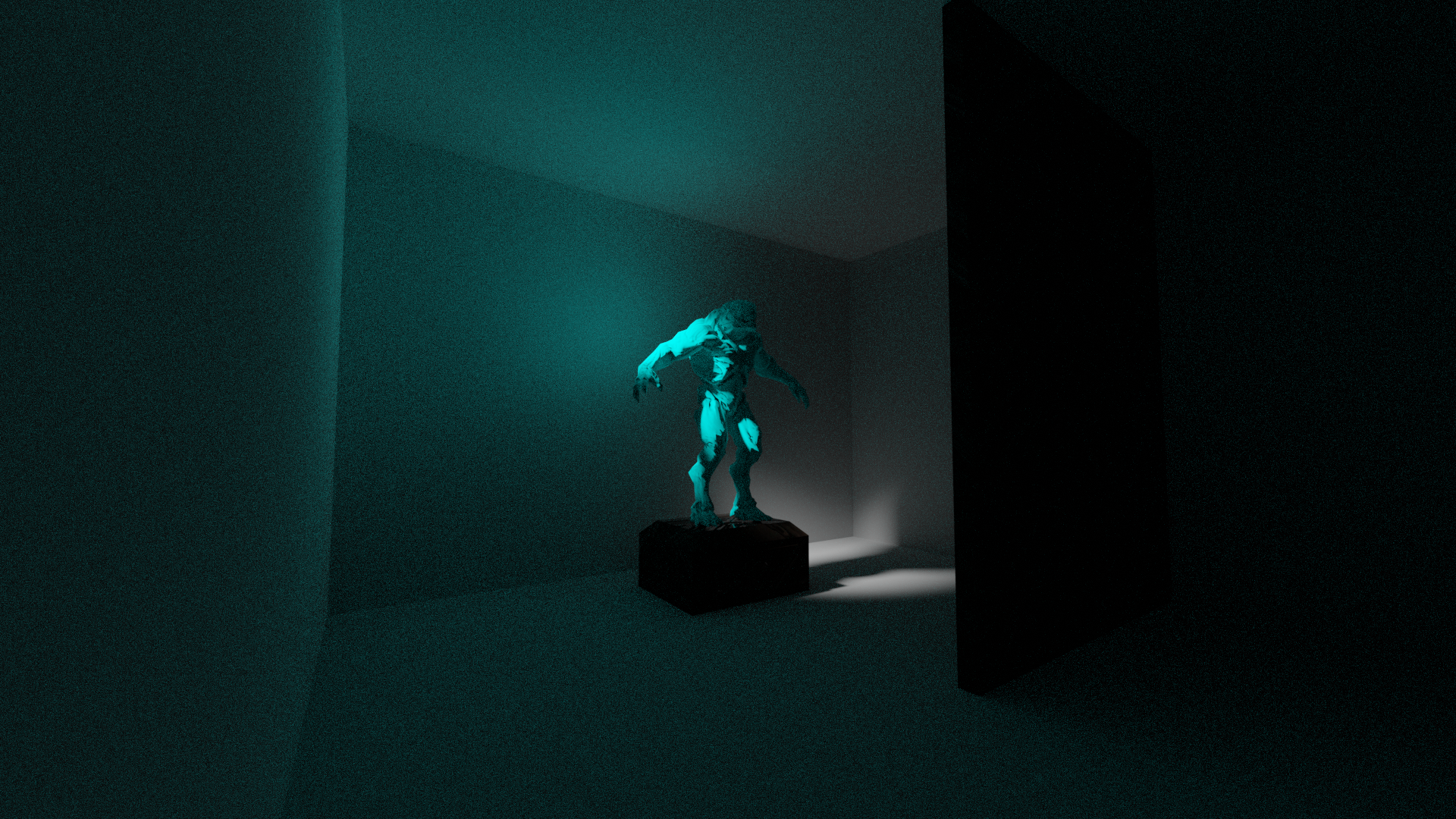 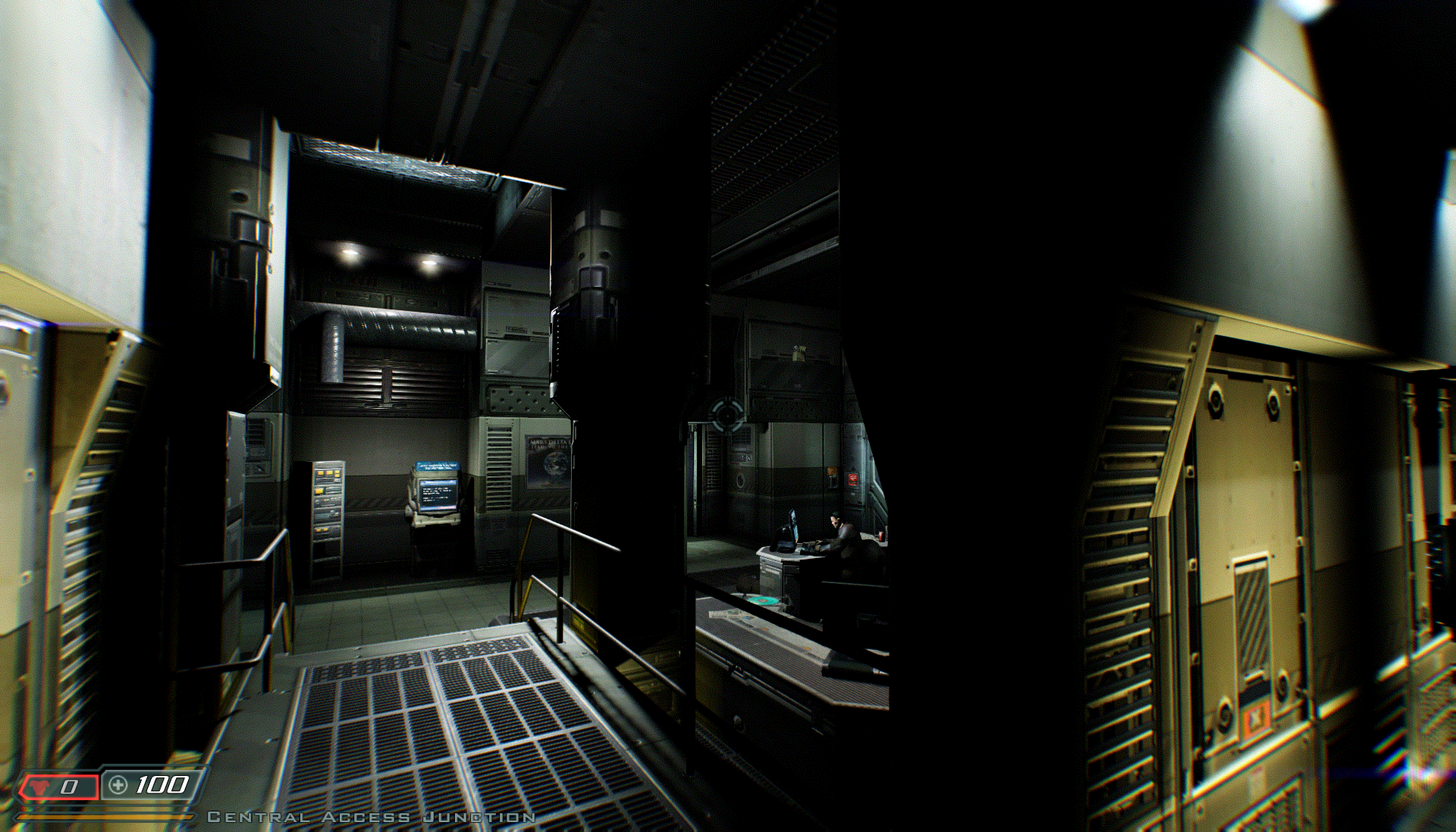 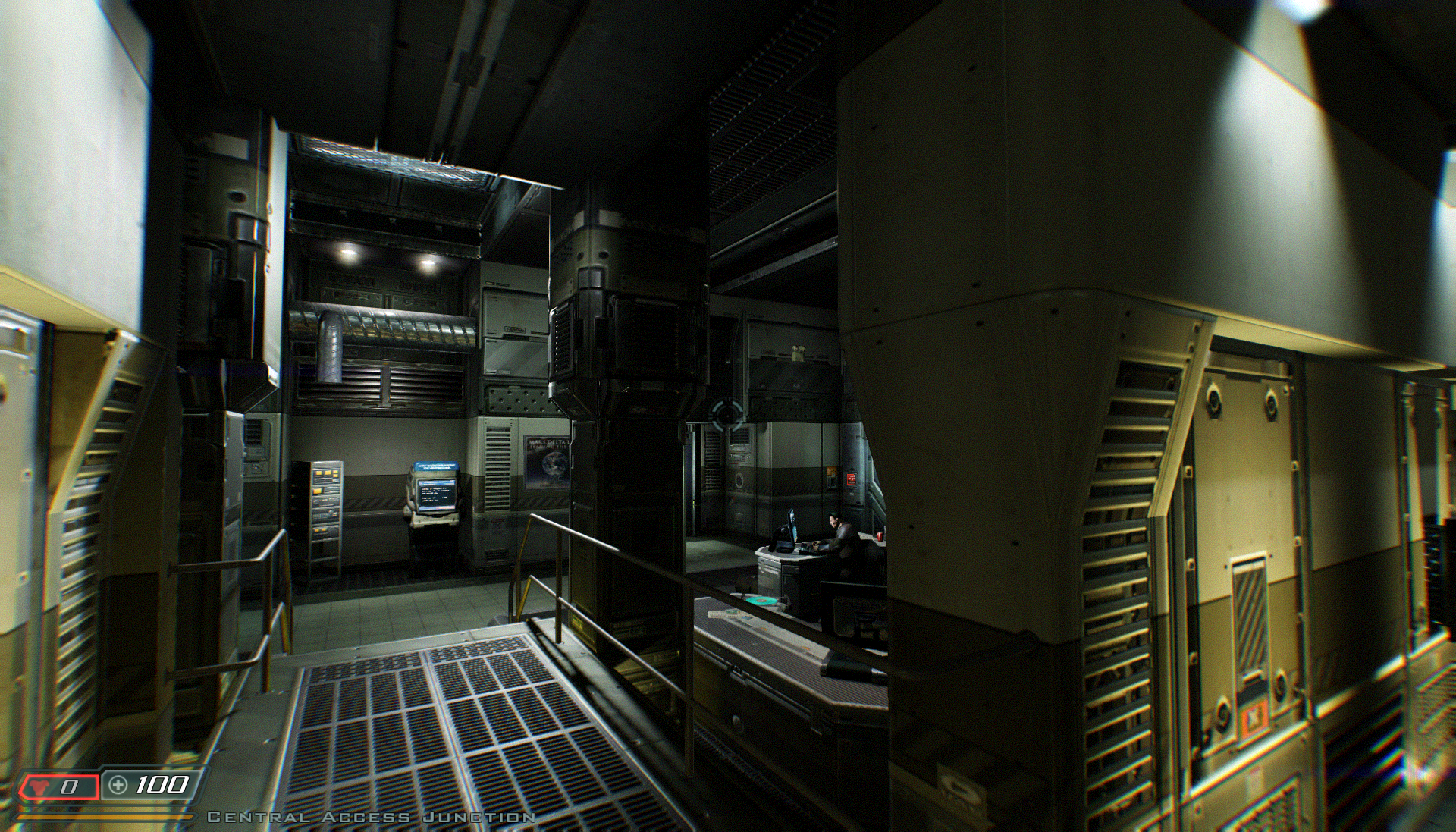 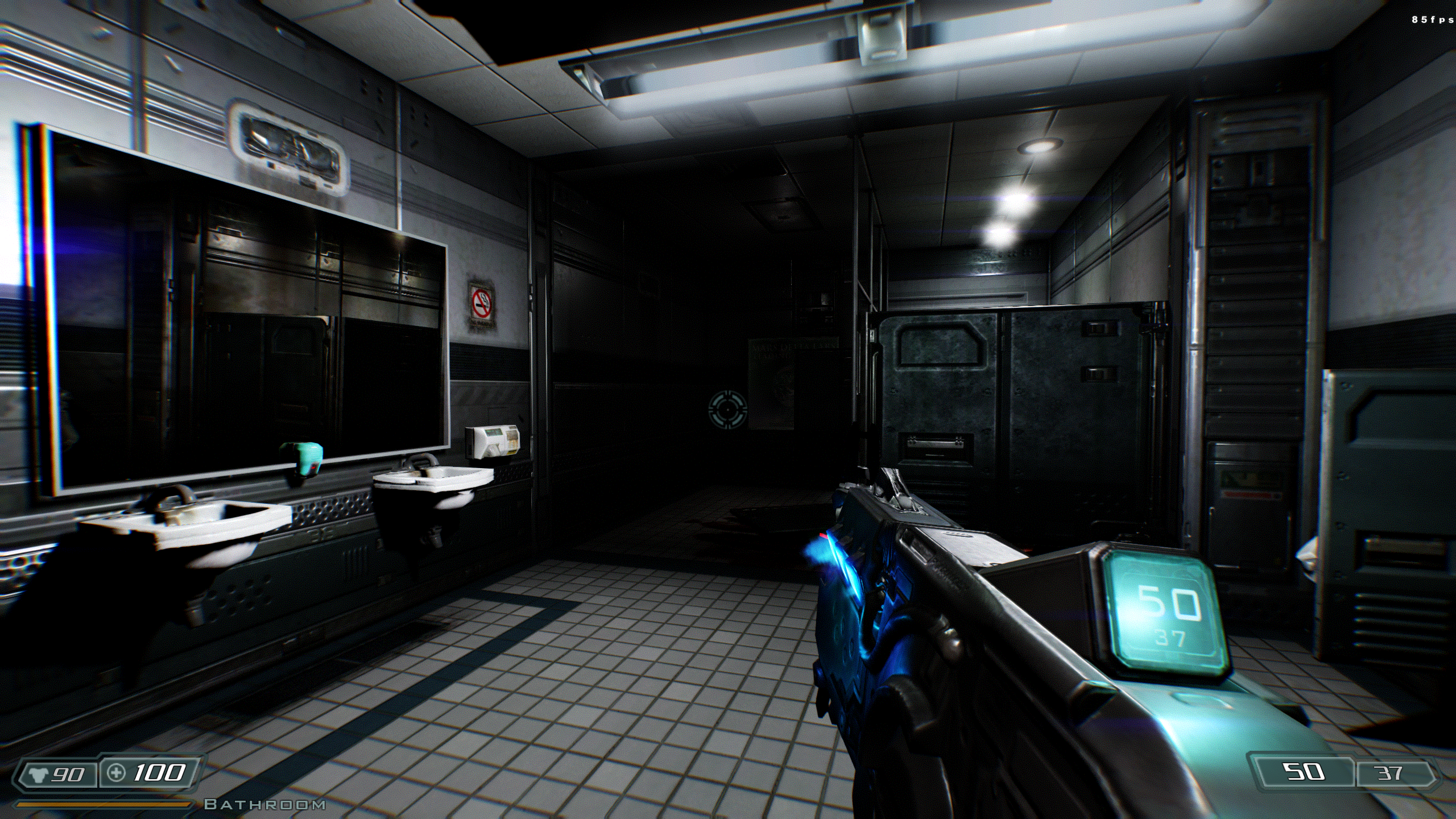 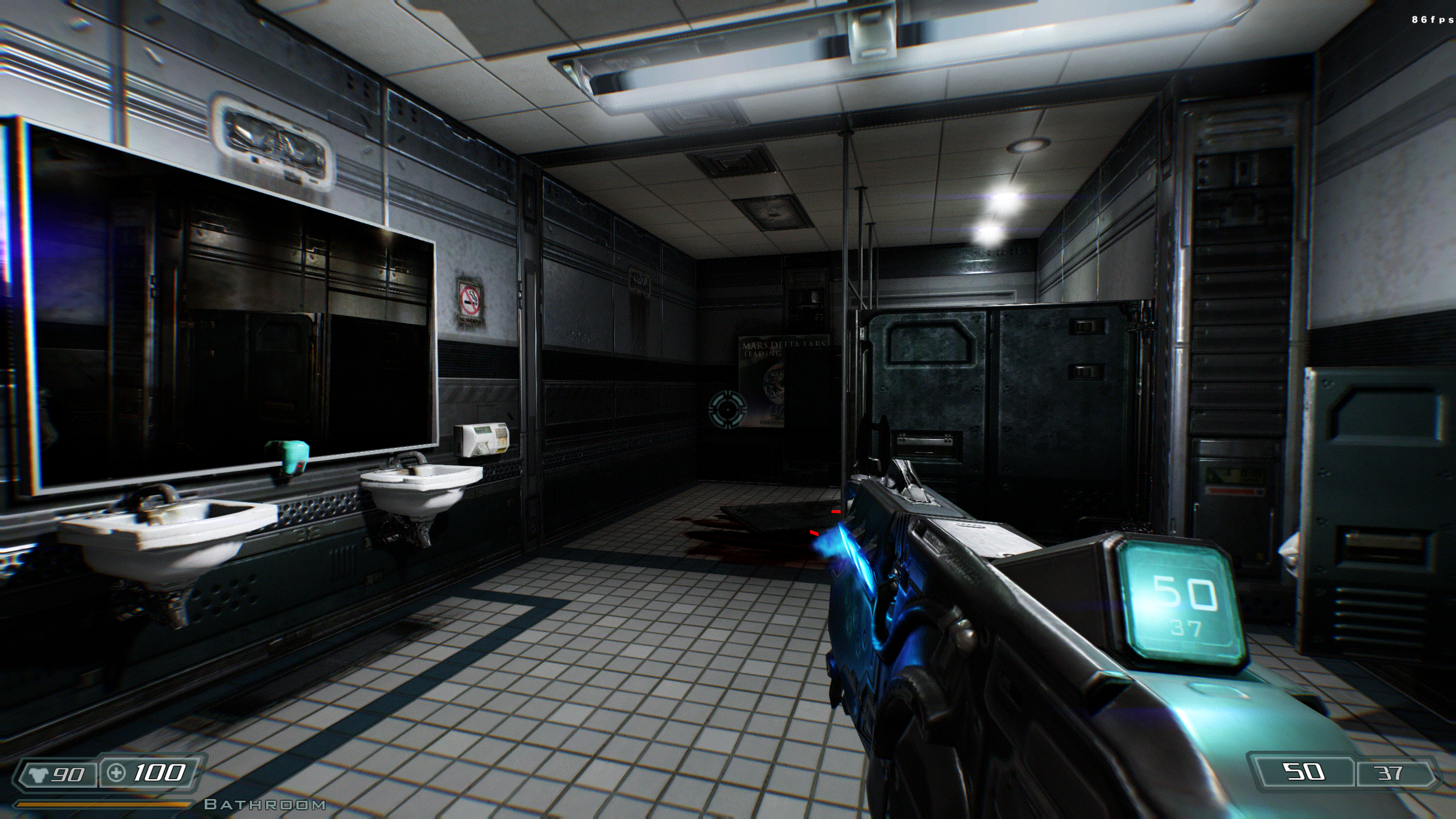 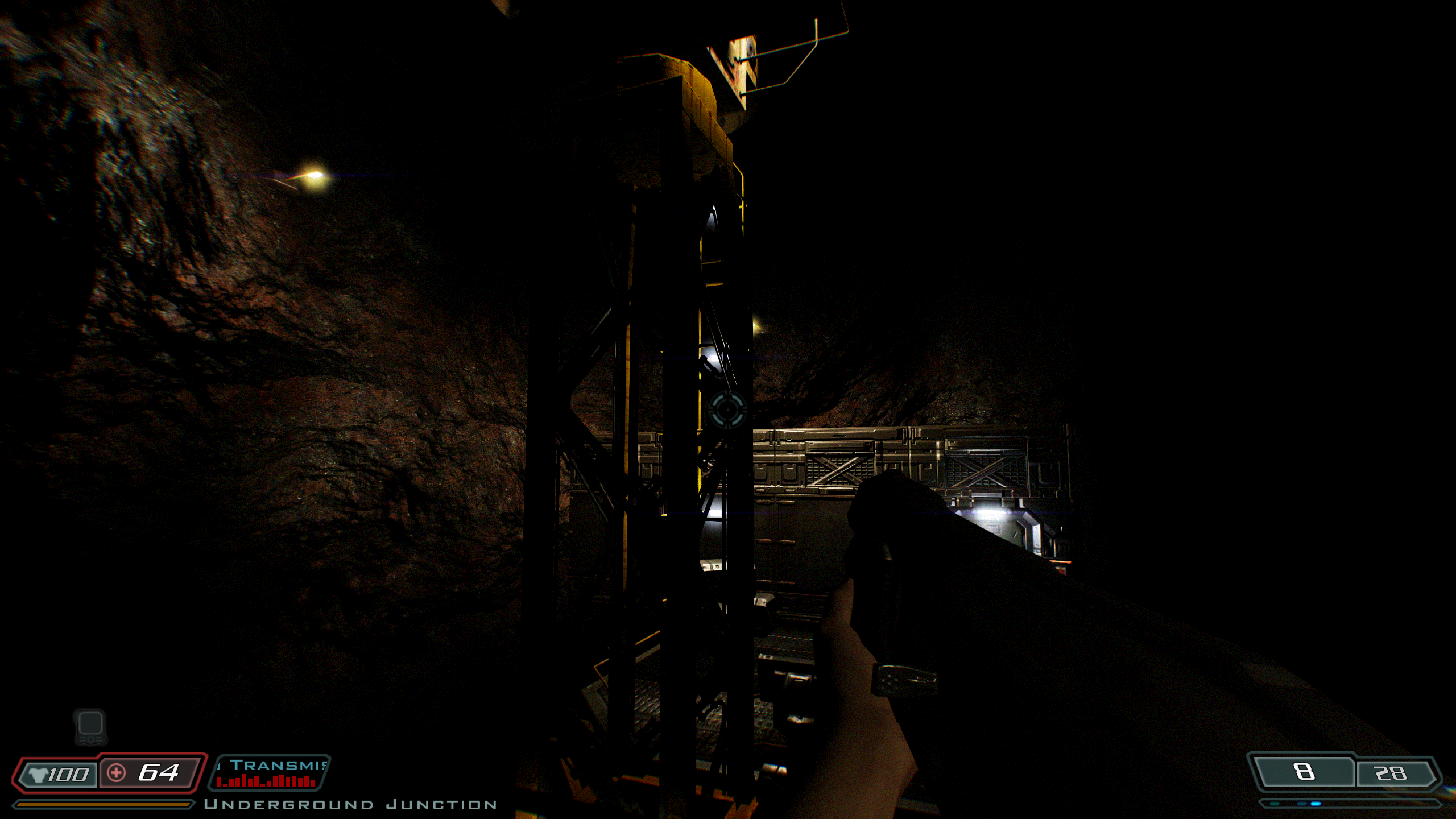 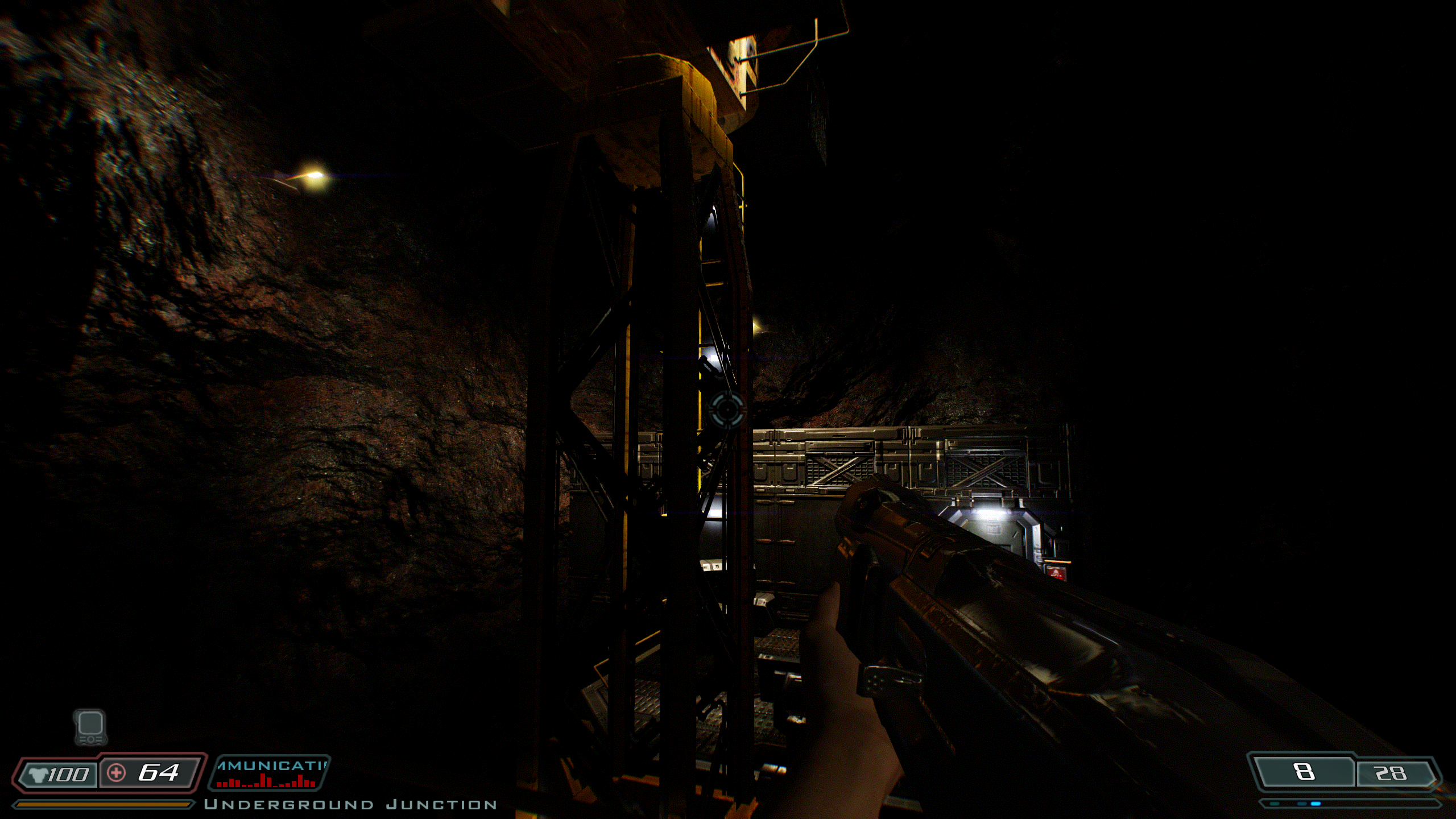 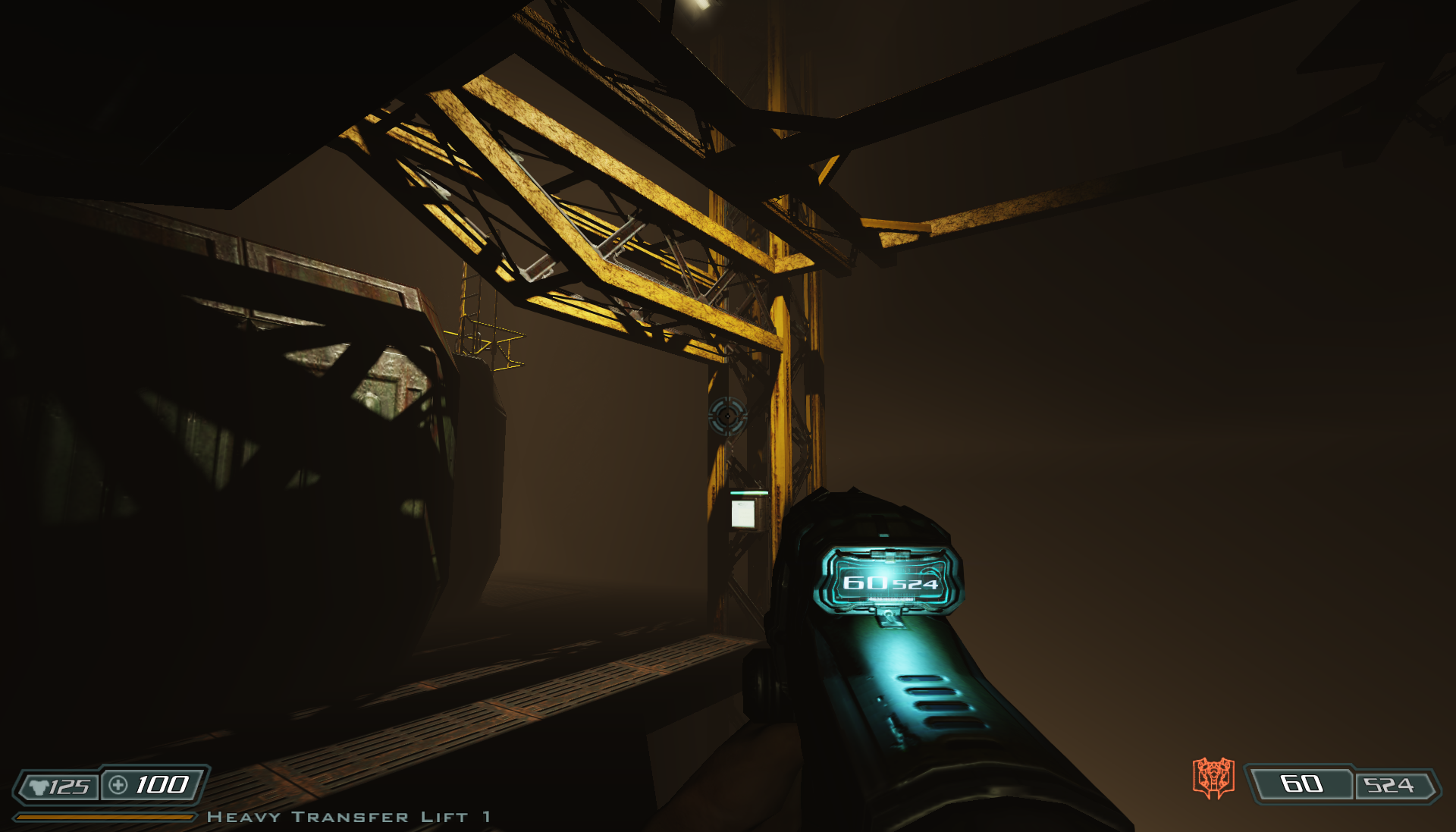 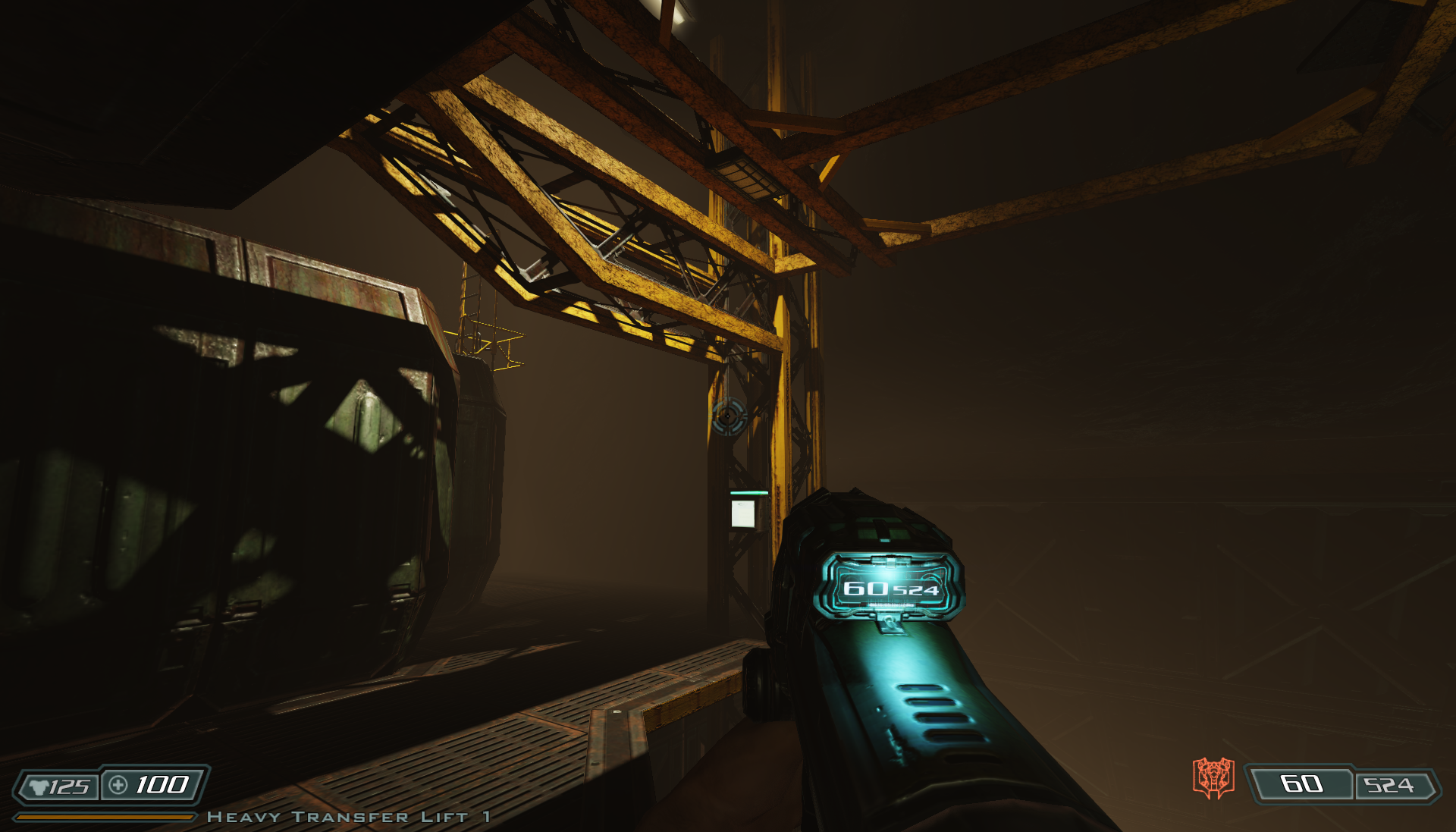 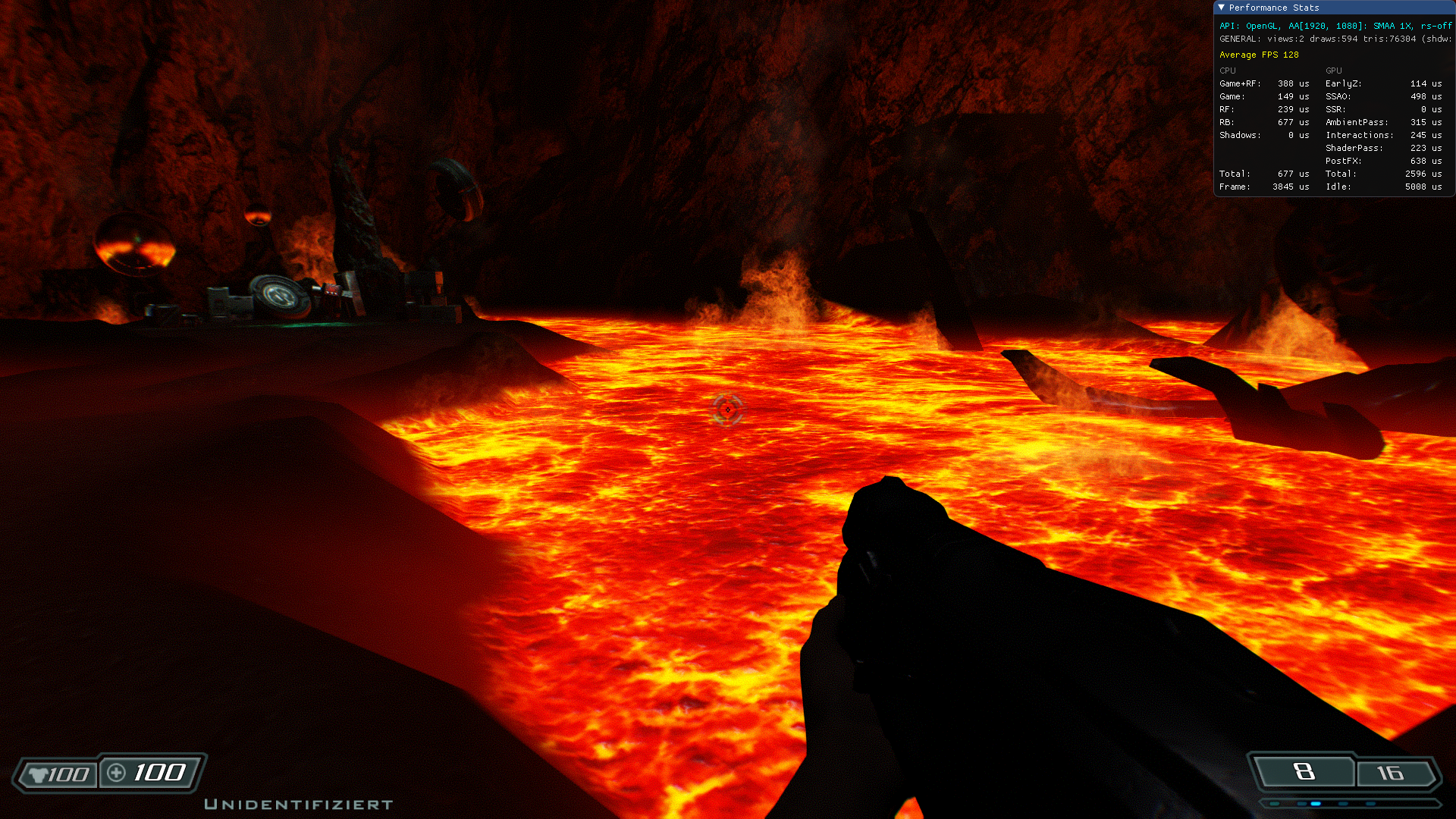 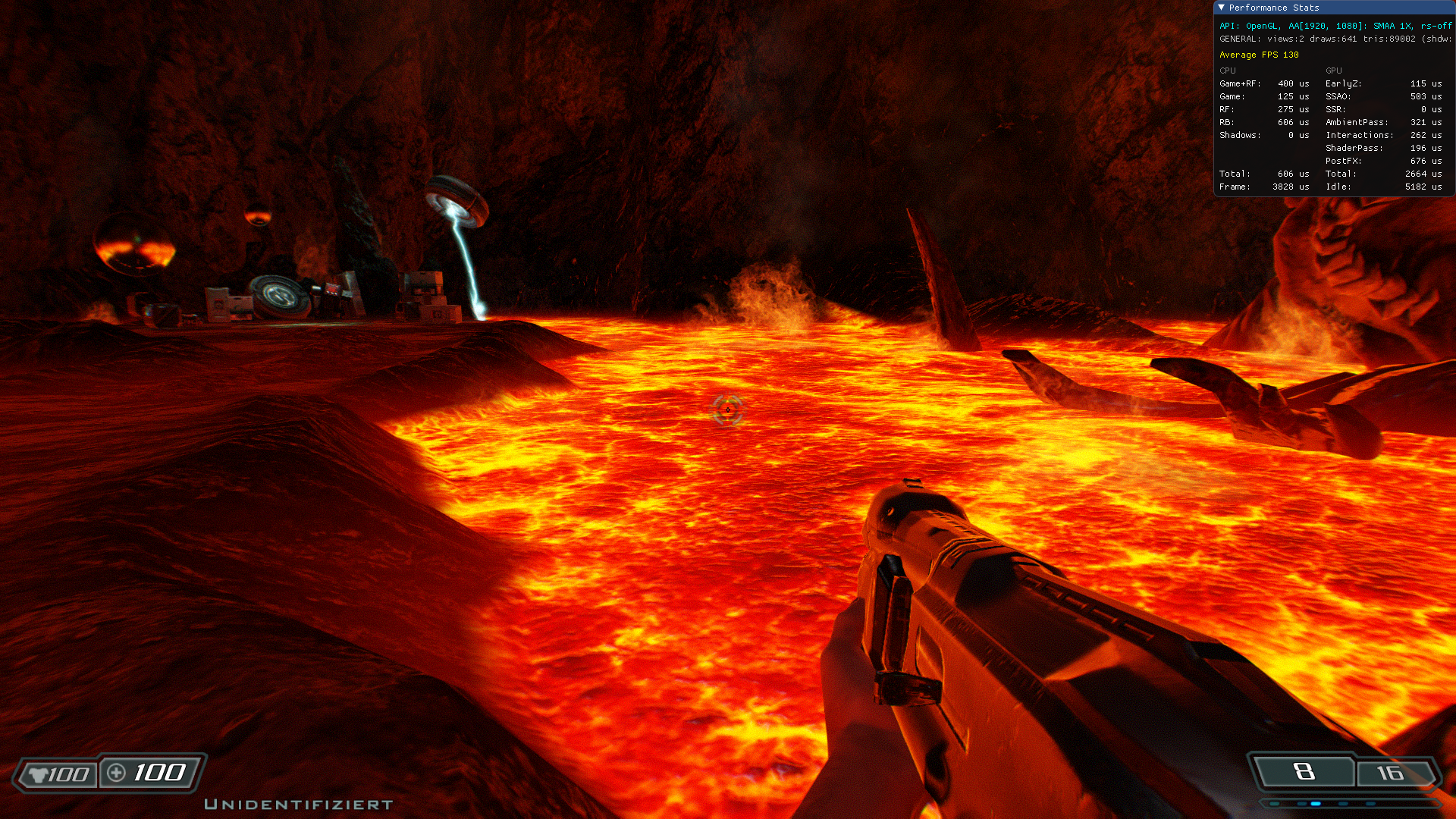 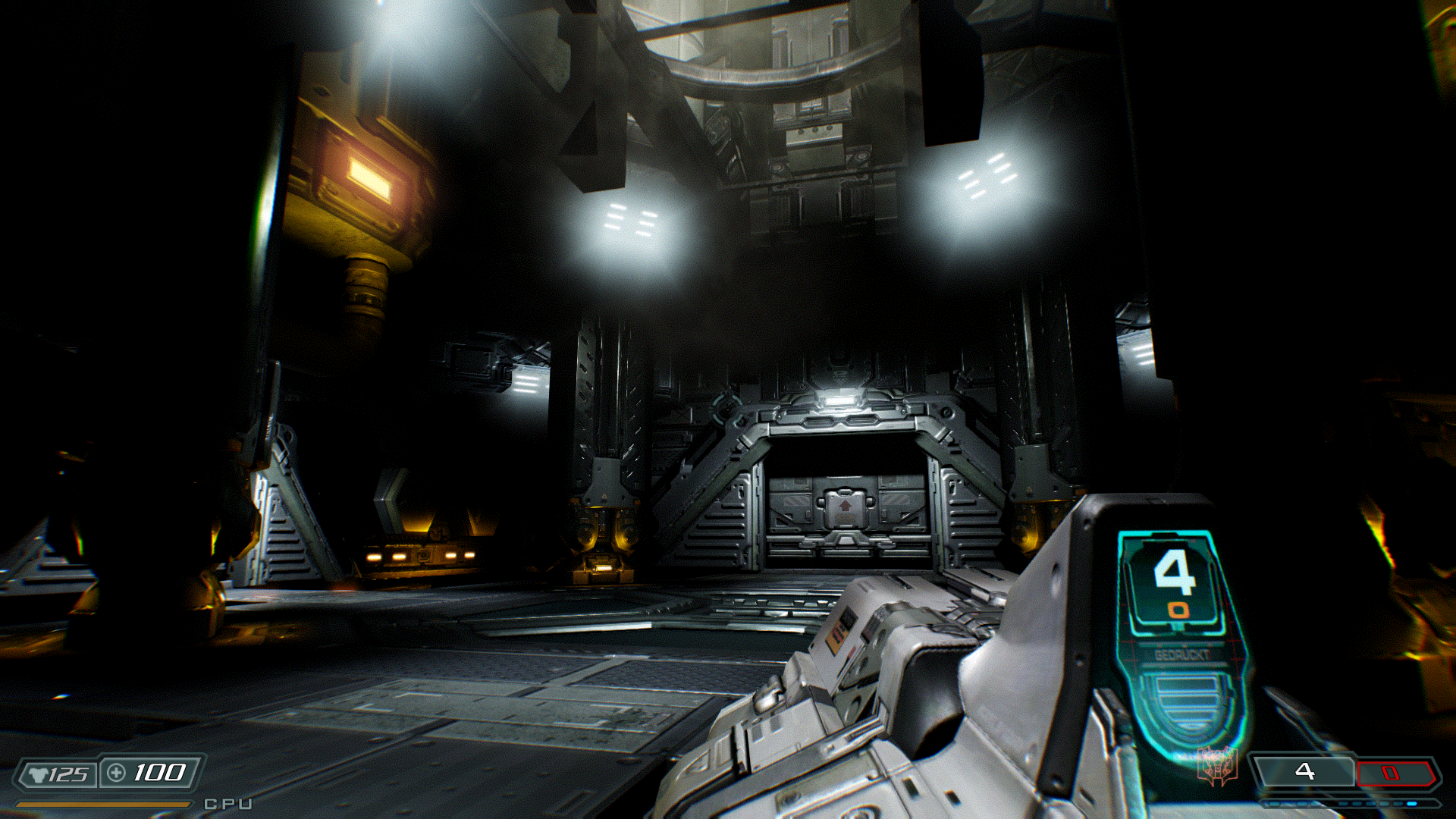 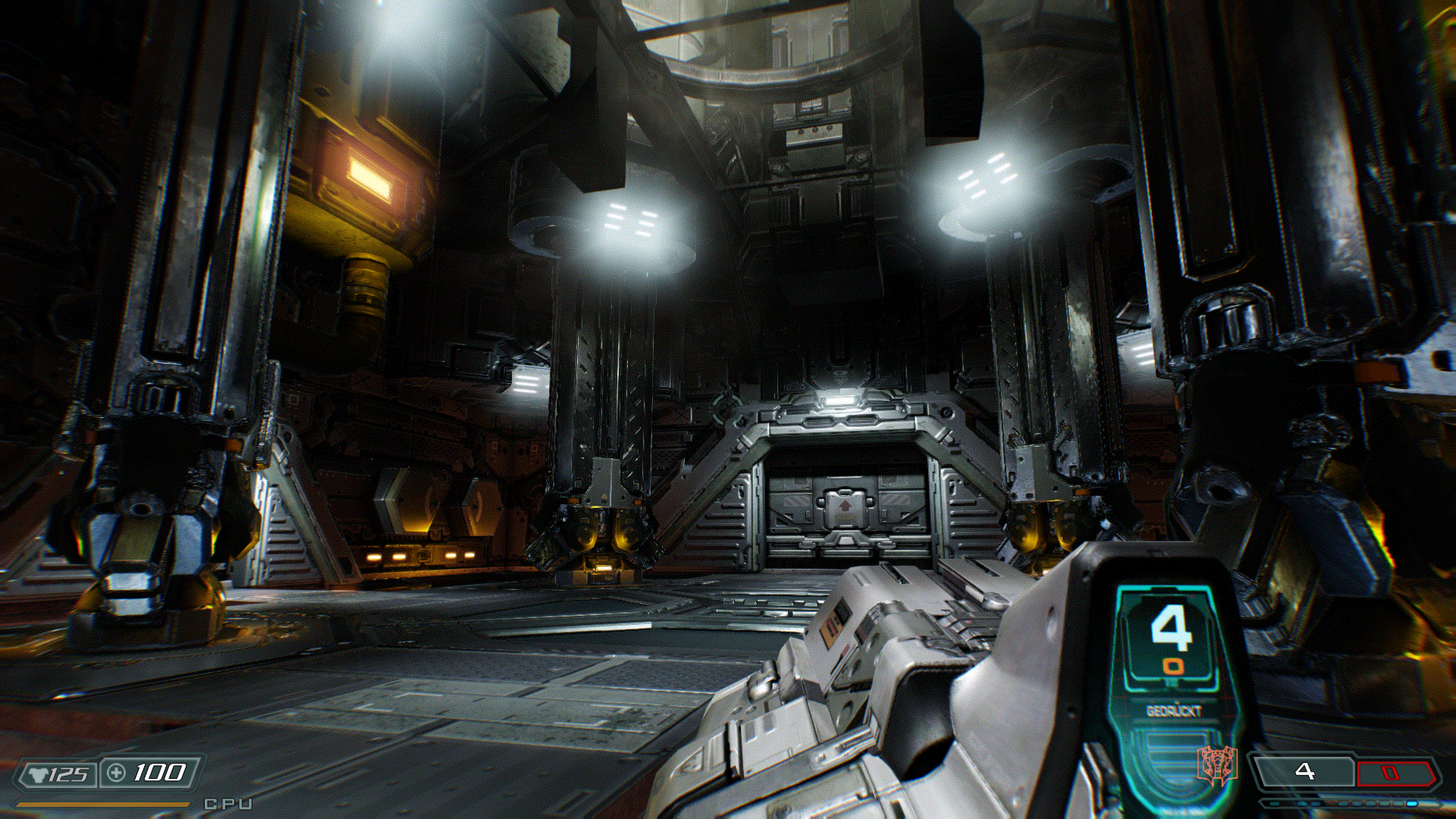 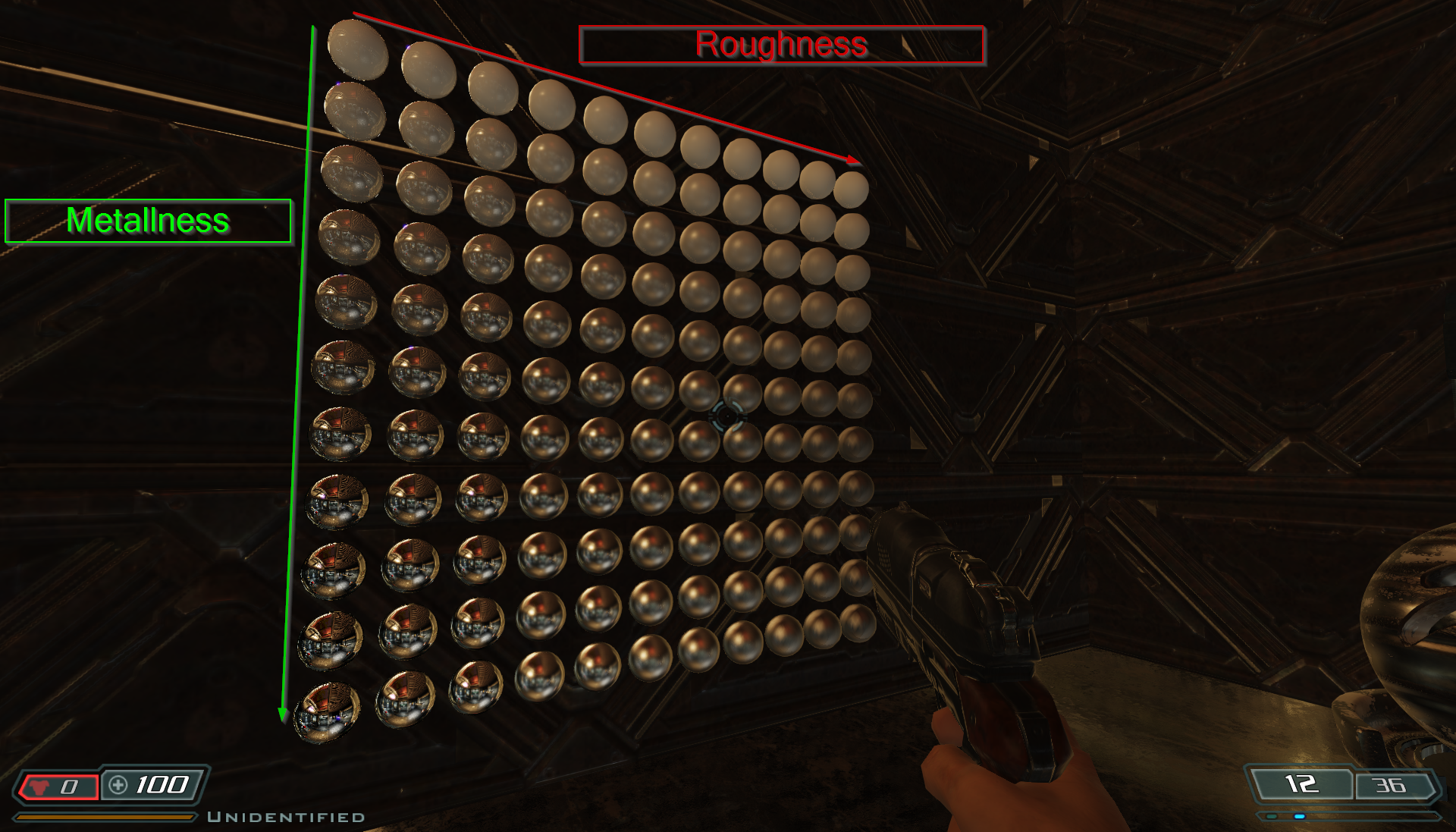 In Doom 3 a classic simple materials looks like this:

It's usually rendered with Blinn-Phong specular with a fixed specular exponent. Specularmaps are more or less Gloss maps.

In RBDOOM-3-BFG it uses the PBR GGX Cook-Torrence formular and you can vary the roughness along the material like in other modern engines and you usually define a texture with the _rmao suffix.

The engine will also look for _rmao.[png/tga] overrides for old materials and if it finds those it will render them using a better PBR path. Old school specularmaps also go through a GGX pipeline but the roughness is estimated from the glossmap.

TL;DR If you enable it then you play DOOM 3 BFG with the optics of a Zack Snyder movie.

Dithering demonstration: left side is quantized to 3 bits for each color channel. Right side is also only 3 bits but dithered with chromatic Blue Noise. The interesting fact about the dithering here is shown in the upper debug bands. The first top band is the original signal. The second shows just 8 blocks and if you dither the those blocks with Blue Noise then it is close to the original signal which is surprising. 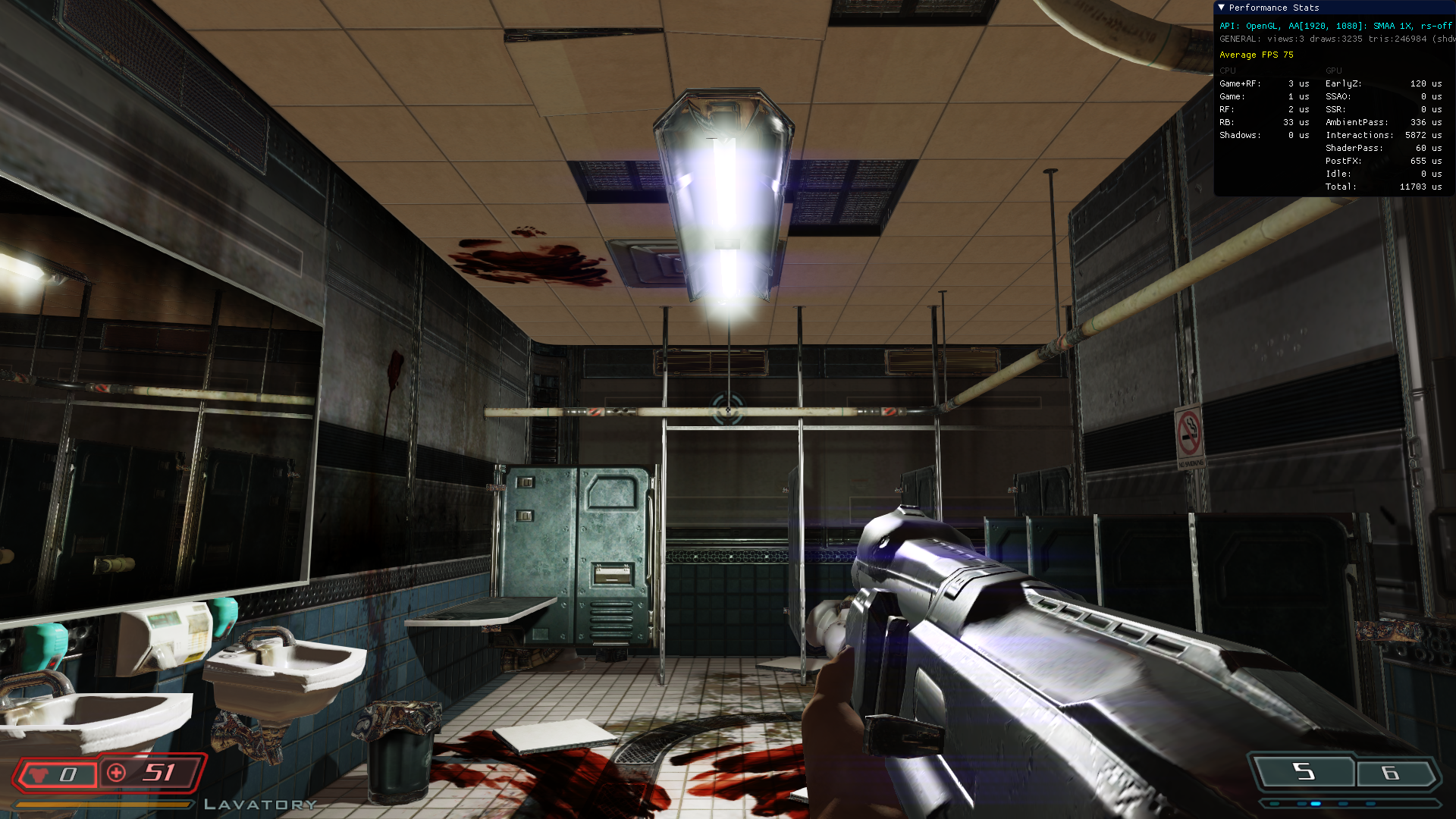 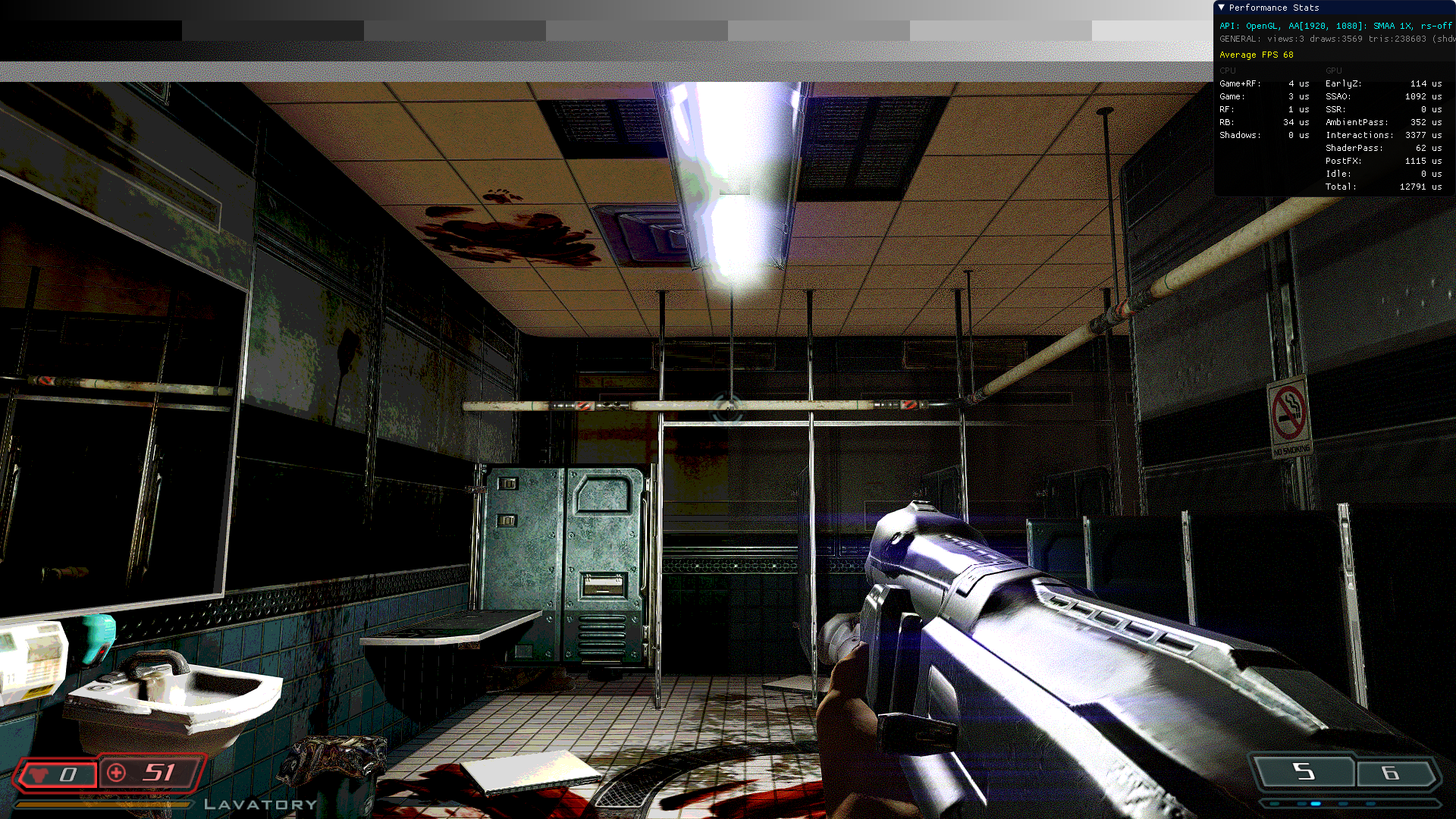 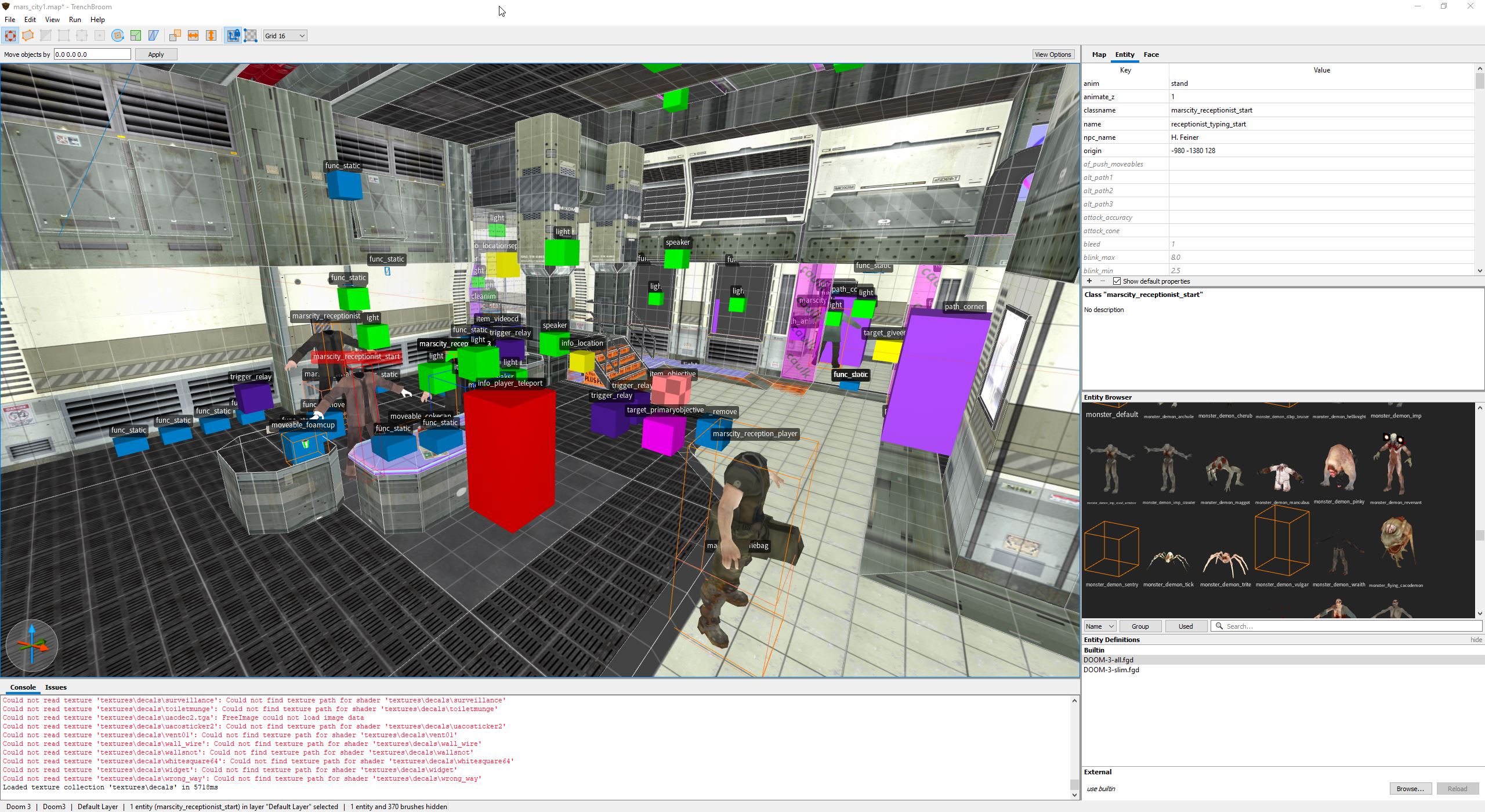 This is still very much Work in Progress and not supported by the official TrenchBroom.

Mapping for Doom 3 using TrenchBroom requires an extended unofficial build that is bundled with the official RBDOOM-3-BFG 7z package. You can find the customized version under tools/trenchbroom/.

Doom 3 also requires some extensions in order to work with TrenchBroom. I usually develop these things for RBDOOM-3-BFG but I created a seperated brach for vanilla Doom 3 so everybody can adopt TrenchBroom and the new Doom 3 (Valve) .map support.

The goal of the TrenchBroom support is to make it easier to create new maps. It doesn't allow to create bezier patches at the moment so you won't be able to edit existing Doom 3 maps.

You can only save maps to the Doom 3 Valve format but you can copy paste from the vanilla Doom 3 .map format into the Doom 3 (Valve)configuration and reset your texture alignment as you want. TrenchBroom doesn't support brush primitives like in D3Radiant or DarkRadiant and if you are familiar with TrenchBroom then you know that the preferred .map format is some kind of (Valve) .map format for your game.

The Quake 1/2/3 communities already adopted the Valve .map format in the BSP compilers and I did the same with dmap in RBDOOM-3-BFG.

Here is an overview of the changes made to TrenchBroom:

Some Scenes of Mars City 1 loaded into TrenchBroom 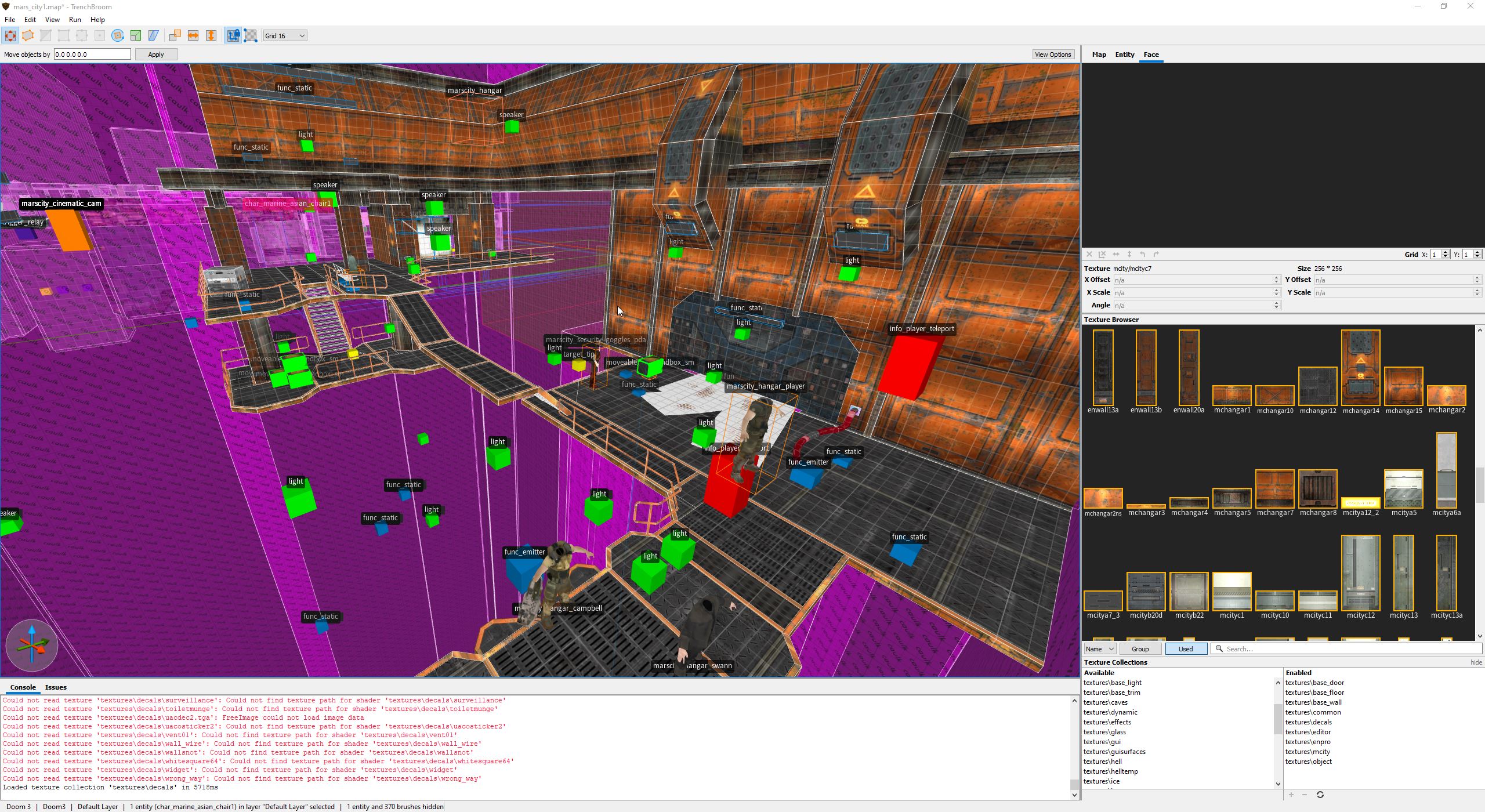 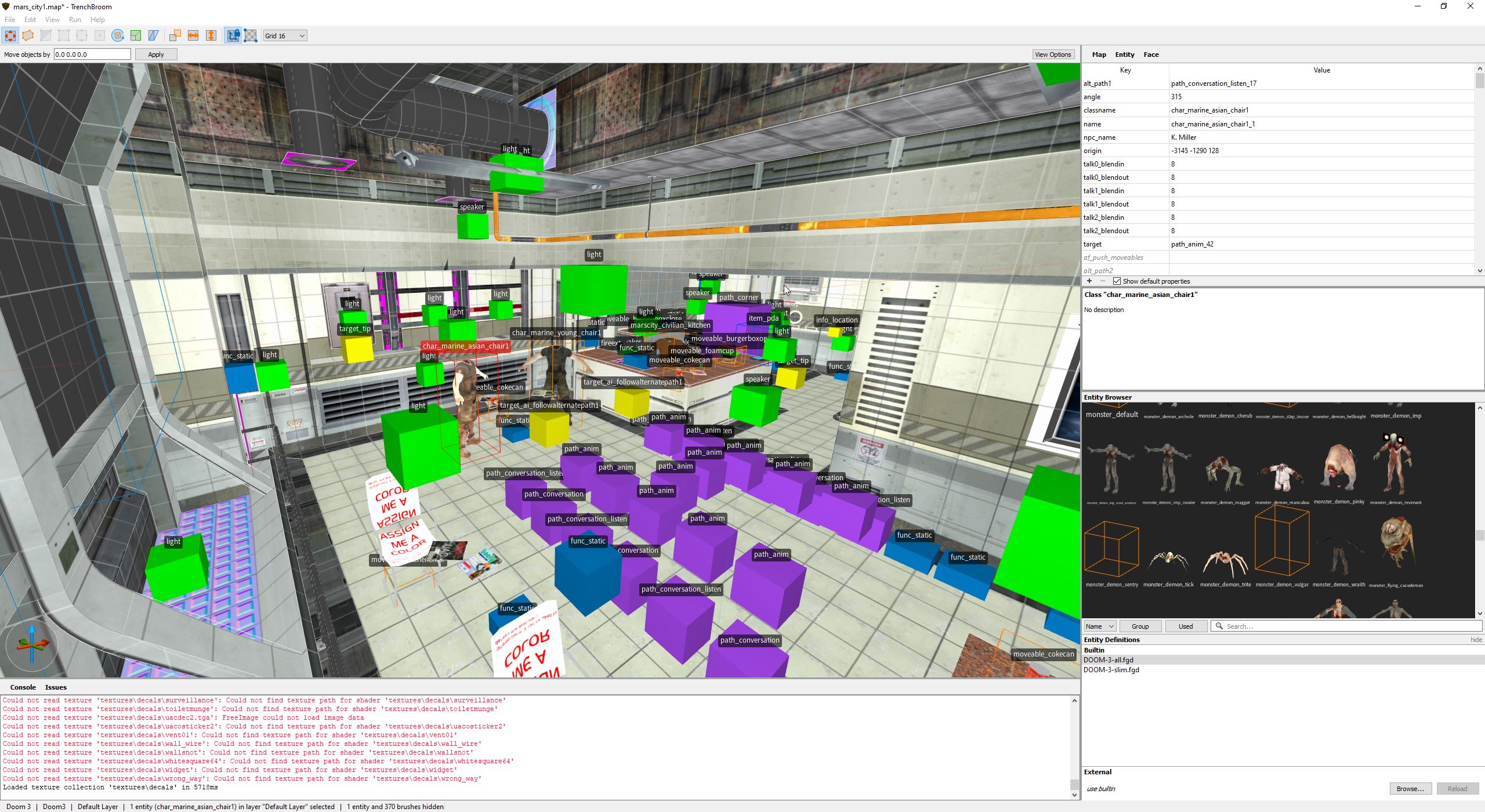 This version improves support for mapping with TrenchBroom and comes with a couple of bugfixes like working stencil shadows. This release is intented...

Maybe this ia a dumb question, but how do you import the doom 3 maps into trenchbroom for viewing/editing?

First, download this mod into your BFG files location as instructed in the readme file.

The mod comes with a modified version of Trenchbroom that allows you to make maps for Doom 3 and BFG.

Then just hook up the D3/BFG option to your game files location and then loading in D3/BFG maps is a breeze from there.

Ok, i got trenchbroom loaded up, but im not seeing any options to import maps. What do i do once i open the program?

Not sure if it's your mod or HiDEF mod, but when I walk around the lighting flickers.

SSAO produces horrible lines on walls, so I disable no big deal.

But whenever I move, the lighting flickers, its hard on the eyes.

Using Doom Ultimate (running run_mod.bat) and having a GFX error on a NPC, anybody else have this? Does not do this using RBDOOM 3 BFG 1.3.0 exe. Is it because of this, md5mesh model support is missing.
I.postimg.cc

Actualy my issue come from runtime. My version was to old.

Hi Y2keeth ! Like Evilhog i have the same issue with dll in Windows 7. The last version of Doom BFA cause the same issue. I reinstalled all the x86/x64 Visual C package beetween 2013 and 2022, but i got the same error message. The first missing dll is Xinput 1.4... I don't have any issue with other game, it's very strange. The last version of RBdoom that cause no issue is the old 1.0.3 32bits version. I certainly forgot a x64 package but i don't know what. Thanks Y2keeth.

yes you are on the wrong page

Hi there BFA dev. First this is the Mod page of just RBDOOM and not y2keeth's Hi-def mod. Second, I thought that I had that addressed, I guess I can re-release BFA and force it to use XInput 9.1.0 which is known to work with Windows 7 without any additional library installation.
Thanks for the Feedback

Hi, your latest update of BFA *does* work on Windows 7. Now I wish RBDOOM was updated the same way.