A Collection of various Portal 2™ Adventures

Portal: Forever Testing Is a Fan-created Modification for Valve Software's Portal 2™ containing a variety of custom-built levels for the game.

​Originally started in 2019 as a small map-pack for Portal 2™, Portal: Forever Testing has been separated into a stand-alone mod for the game.

Postmortem: How we got here (+Future plans)

Lately, as this mod has sat in post-mortem for a while, I have started to reminisce about the good ol' time I had creating this thing. so, its time I tell the story, to the best of my ability. 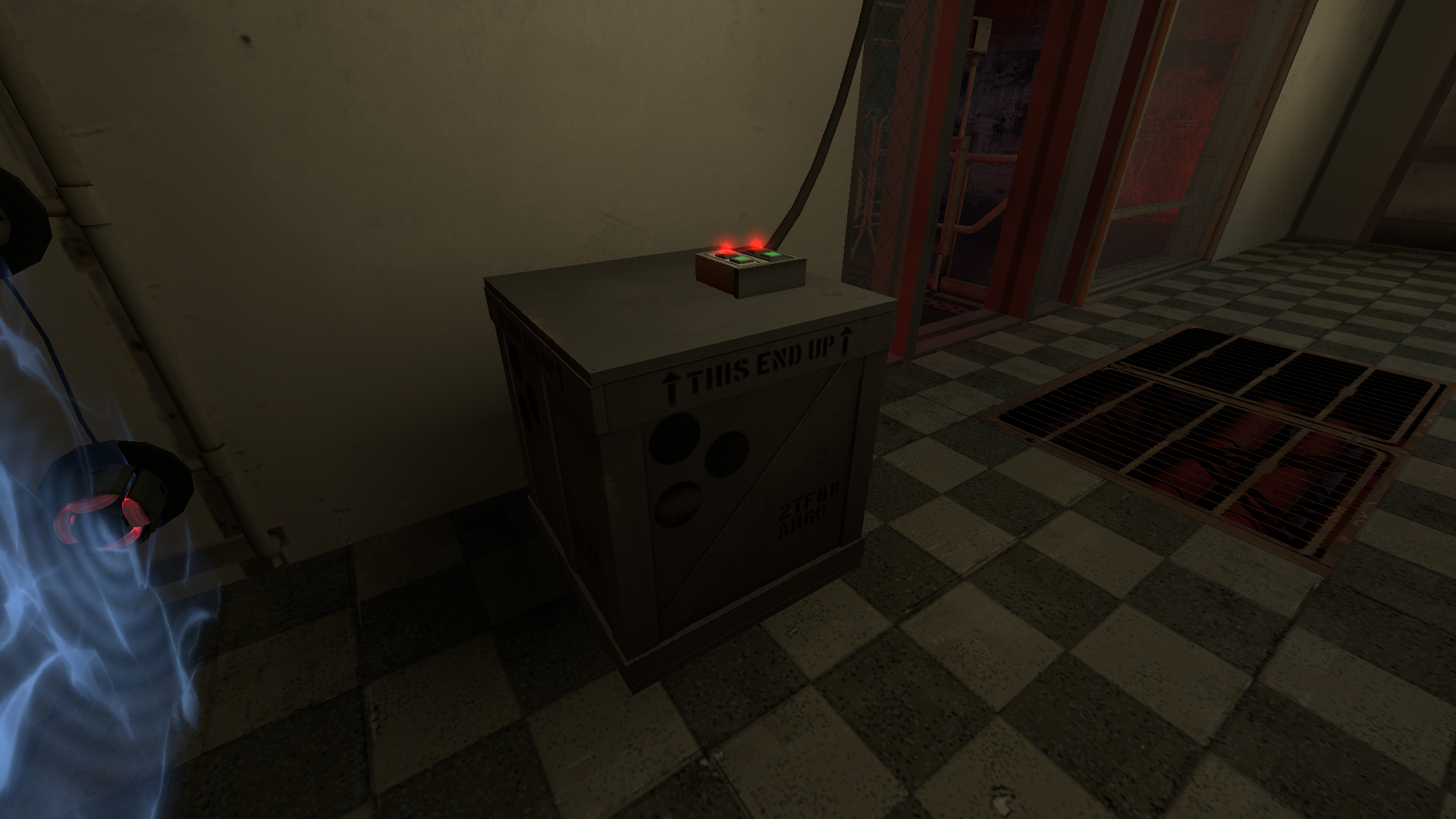 In the beginning, this mod started in 2019 as a small map-pack on the steam workshop called "lost between floors" (a name I have re-used; but I'll get to that later.)

While I was struggling between an ill-planned indie game development career's apparent failure and general frustration with my artistic skillset, I began to experiment with something I had abandoned for quite a while: Portal 2 mod-making. among other experiments, I began to create a map-pack that would tell the story of how the thermal discouragement beams were invented by aperture, starting in a sealed-off obscure lab in the facility, accessed through a hole in the wall of a stuck elevator.

Eventually, after publishing that first map in the workshop, people began to complain slightly- due to, at the time, my poor ability to communicate the game mechanic as, essentially, an invisible laser. People were calling it "the door mechanic thing" because all they could tell was that doors opened randomly when they placed portals. So, I replaced the wireless signal boxes (pictured above) with standard lasers in further iterations- and it was then that an idea struck:

"What if I make this a full-blown mod? with a story and everything..." and so, Portal: Forever Testing was born. 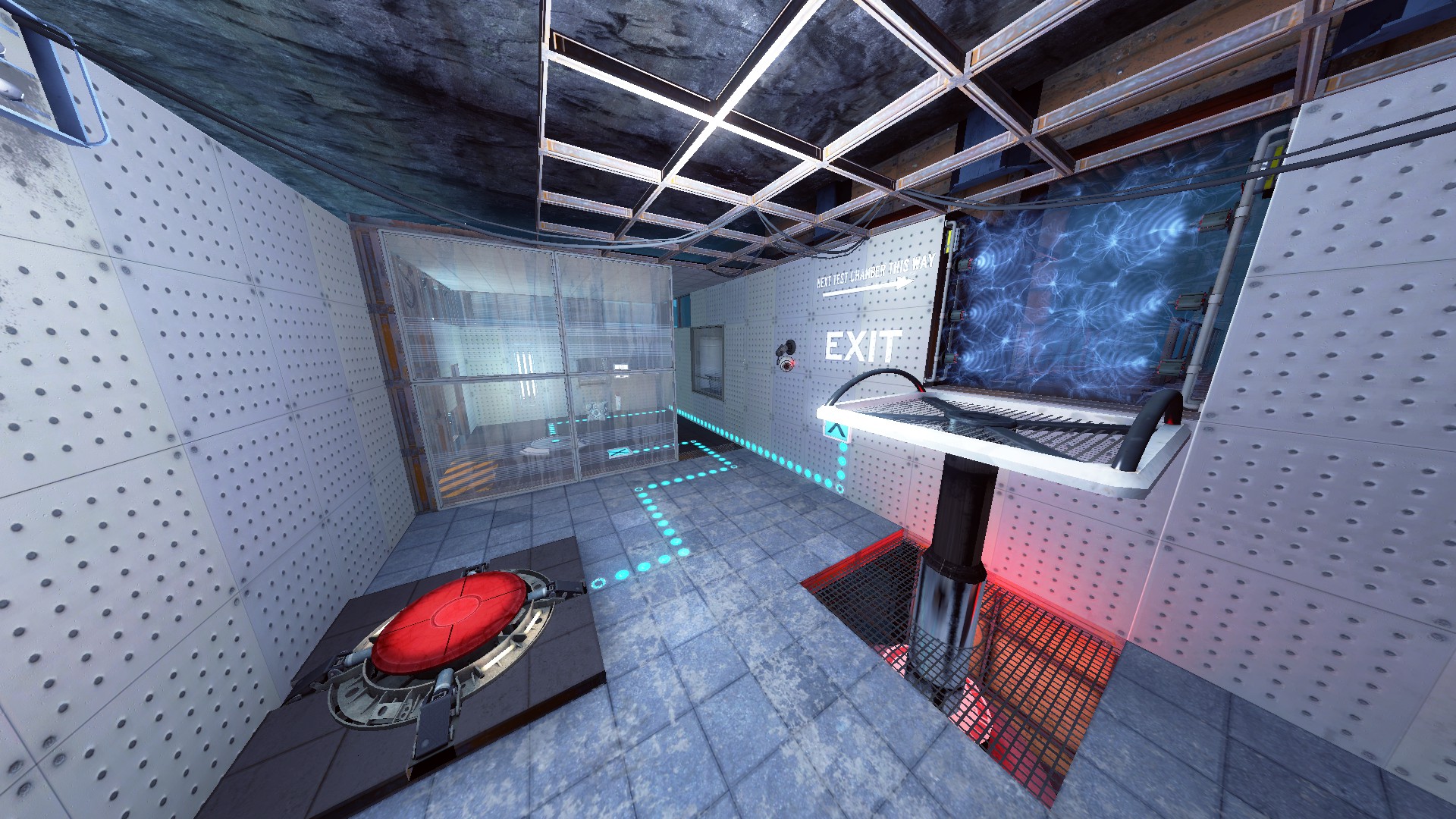 During the 2020 year, I brought on a handful of several playtesters and a couple of voice actors with the intent to tell a brand new story within the Portal multi/universe, focusing on a Core named David; and a part-time scientist, part-time test subject, named Kate. Development was in full swing- We had an entire playtesting system set up to automatically record tests, automated scripts to build new test versions, and plentiful cave johnson jokes for my "Test Subjects" to toss around. 2020 was when the version I call "PFT: Classic" came into being.

In spite of these lighthearted, albeit stressful, times- It's no secret that 2020 was not a good year for anybody, overall.

I am currently writing a fanfiction novelization of the story, so I won't be able to summarize it here, but the game's narrative took quite a few turns and twists, spanning portal 1 and 2 eras, and was somewhat overly ambitious-

So, as often happens within the portal community, I got hefty criticism- almost all entirely un-due. From ever-so-slightly misaligned floor tiles to "incredibly blue fog" to "lights aren't supposed to be red like that, and it looks like 'angery' stract [who is a well-known community member known for using a caged industrial lamp as his avatar]" to "that button is straight outta goldsrc", it didn't matter. They had no problem with nitpicking stuff that had no problems itself. The "there's nothing good about you or your work"-attitude and criticisms from popular developers of similarly ambitious portal 2 mods, as well as popular people in the community generally, came in unfiltered and often with a venomous tone. I can't pretend that the criticisms were necessarily about just my mapping, as there were also disagreements semi-sortof-recently about other far more stupid things, which they were all still angry about. But, these things have a way of affecting one's mental health. At this time, I was also briefly working on the upcoming mod, "Destroyed aperture," but had to leave because I needed time to heal from the things that had been said to me by other people- a decision I made on my own, in spite of rumors that would have you think otherwise.

This all said, through counseling and prayer, I eventually began to recover. (I am a Christian- prayer is essential for many aspects of my mental wellbeing.)

As part of that process, I restarted the entire mod.

I had a new, ambitious idea for how to handle the mod's development. (in a good way this time, I thought- and I may still try it in a later project eventually...)

Inspired by commentaries on the production of the tv show, "LOST," as well as my enjoyment of HCC Hammer Concepts (a workshop map series by Chtack)- the new PFT was going to be modular and tell the story in a "...and then ___, and then ___" style. My idea was, essentially, to direct my mod's narrative in the way JJ Abrams is infamous for doing in his work as well: ask lots of questions first, and answer some of them later.

Although short-lived, this mod version had the most promise, with an intriguing new mystery for the player to find the answers to. 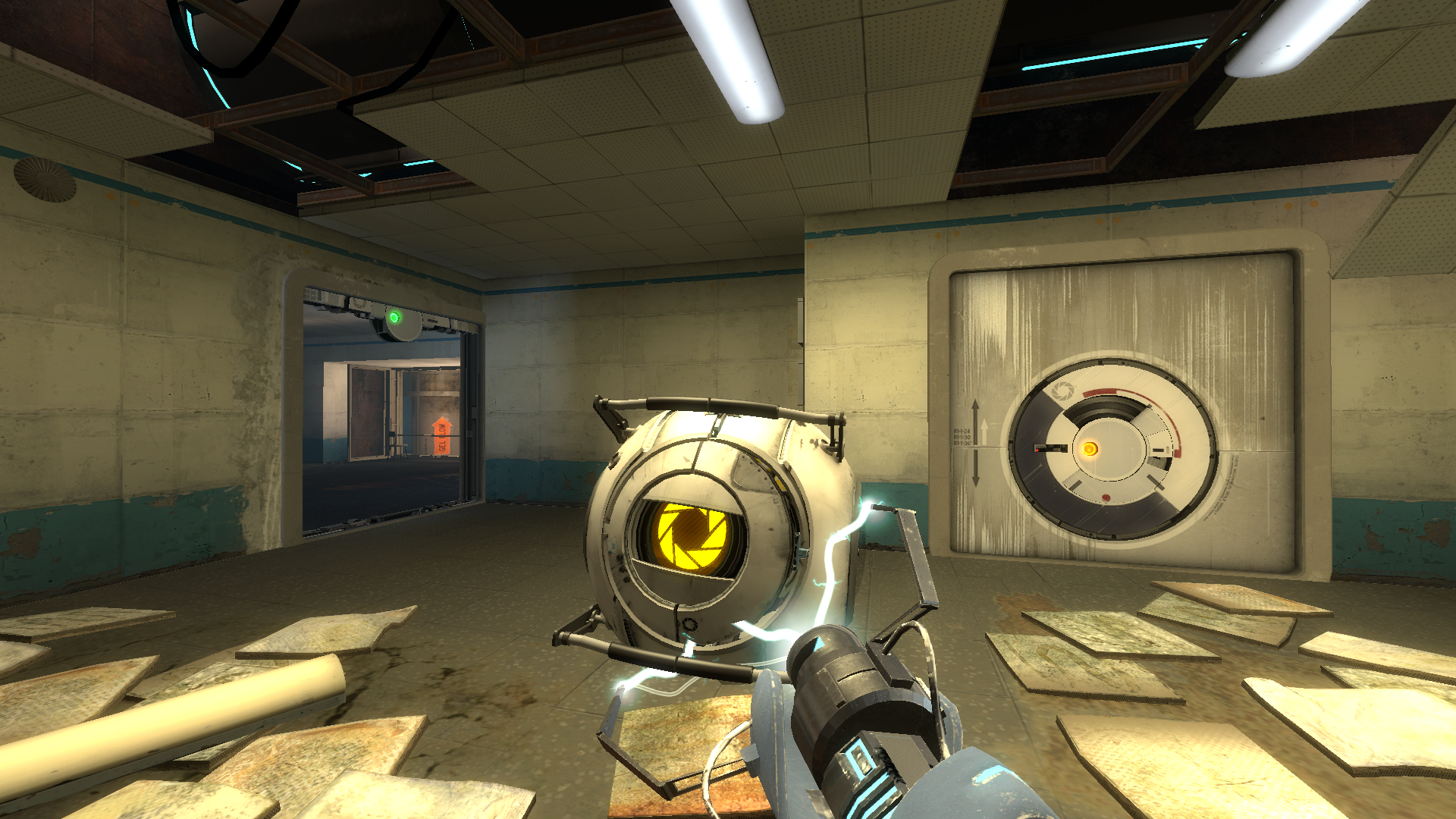 After that version of the mod inevitably failed, It was time to rethink things.

My playtester/actor team was getting bored.

I was getting worn out.

But, I promised myself to finish this mod, no matter what.

In 2021; is when I finally decided to pull the plug on the story-rich idea altogether. This is when I made the new direction article.

Due to miscommunication, the decision ultimately led to the development server's premature abandonment when everyone else still thought it was active. And, several months later- and a great many more fixes and improvements to the maps, PFT was finally ready, in its best- most-probably-final- form. 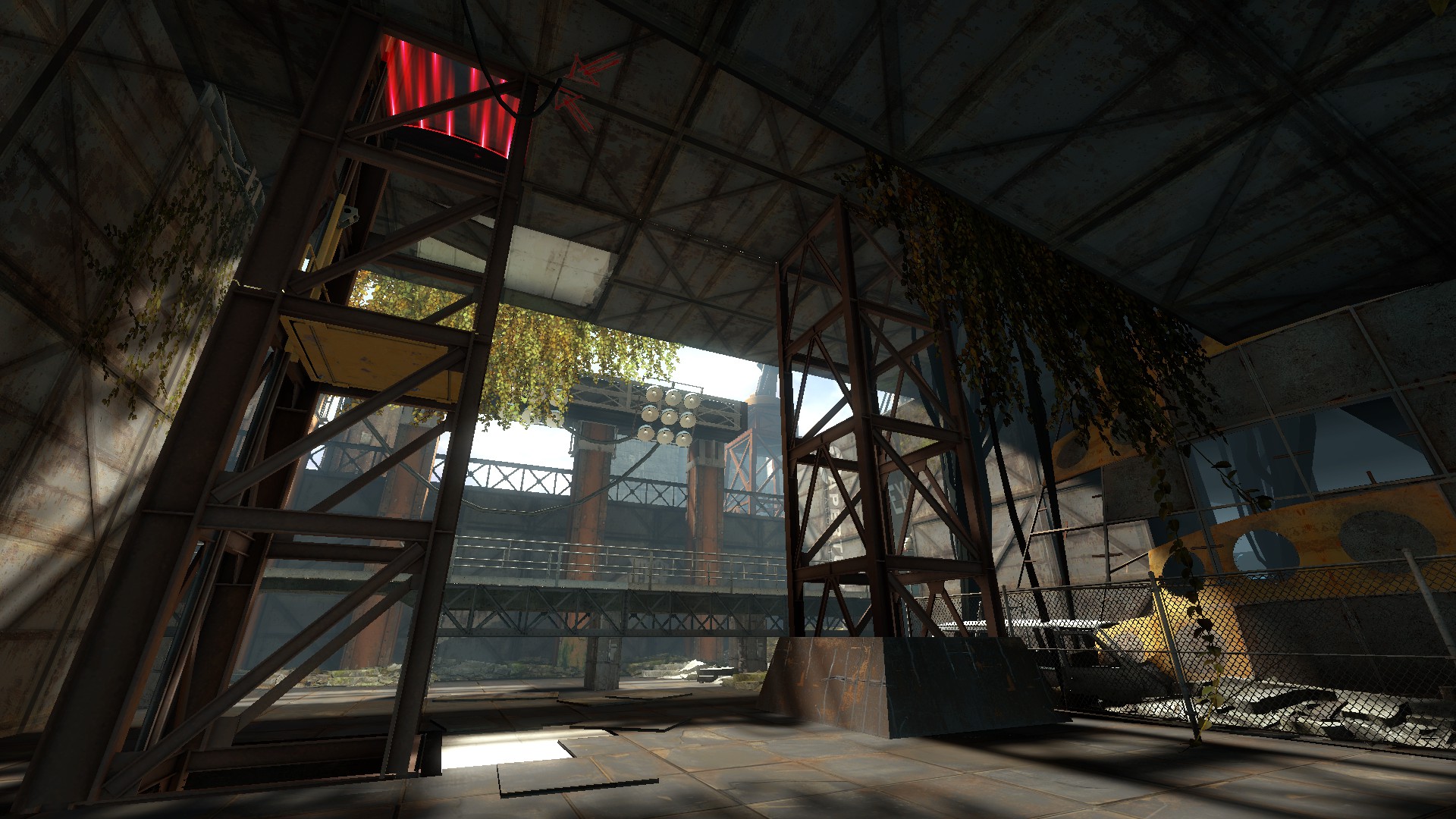 And so, after fixing up my hobby work to be part of the main mod- PFT was released. It was ready. Though in a different form altogether than initially planned, my mod was done. And I was prepared to be done, too- years working on portal 2. years trying to heal from the horrible ways fellow portal community members had treated me. I wanted to quit portal mapping forever and let my modding days become a faint memory. Yet, something still didn't change:

I still didn't want to stop after all.

And so, it is here at the end of this journey that I'd like to announce a couple of new Portal 2-related things on Moddb:

Firstly, I am considering porting PFT to the steam workshop for more easy enjoyment (and with minor fixes and tweaks). Though the idea of it being a mod was originally due to workshop limitations, those have been long since removed now, and I want you to tell me what you think of the idea. (yep, you!)

To get a good taste of what this mod would be like in the workshop, you can play the demo here.

My second announcement, hinted at throughout this article, is more or less already well known, but I want to mention it anyways: Lost between floors is my new work-in-progress map pack on the steam workshop and is the spiritual successor of the original PFT concept of the same name. Based loosely upon the original 4 maps, but soon to be expanded upon, this new series is an adventure exploring areas of aperture lost somewhere beyond the reaches of prying eyes... and yet, somebody might be watching all the same. Stay tuned for updates on that!

I have now released the mod on moddb proper. No need to download via GameJolt!

Forever Testing Is Released! (well, for a while, but...)

PFT is taking a new direction, and it involves plenty of our previous creations...

Exciting news: Portal: Forever Testing, is now on Game Jolt. What does that mean? Read more to find out!

This is the full version of the mod that was originally hosted on GameJolt.

mini-update: I went ahead and ported it to the workshop too. here: Steamcommunity.com

I downloaded it and there is no campaign. I clicked play and it only took me to extras. Where is the campaign?

the campaign uses the extras menu in the mod because portal 2's limitations prevent using the campaign menu. if you installed it correctly, the maps in the "extras" menu you are seeing, should be the actual mod.

You have outdone yourself! Great to see that it's still finished after all these problems! Love it.

:D glad you love it! yeah; its been finished for a while now haha, but i just now finally moved it over to moddb from gamejolt