HELLO, AND WELCOME TO YOUR SECOND ROUND OF MANDATORY EMPLOYEE TESTING.

Return to Aperture in the crossfire of the ending of Portal, and see how everything changes in Portal: Catalyst, a free Portal 2 modification. With a power-vacuum opened up in the Enrichment Center, only two questions remain; what ancient programs are keeping this facility going long beyond the Central AI's downfall? And how are you going to escape?

Portal: Catalyst seeks to explore Aperture's transitional period between the two games, showing the facility changing from the iconic aesthetic in the first Portal game, and transforming it into the sci-fi madhouse of the sequel.

Portal: Catalyst is planned to contain:

Portal: Catalyst is still early in development, and we would appreciate all the help we could get! Please contact us on our Discord for any questions you might have.

Join The Official Discord Server: Discord.gg
We provide updates and you can communicate directly with the team!

Despite intending to maintain the spirit of Conversion/Mind Escape, Catalyst does not contain any elements of story from the previous mods, Catalyst will be an entirely fresh experience. 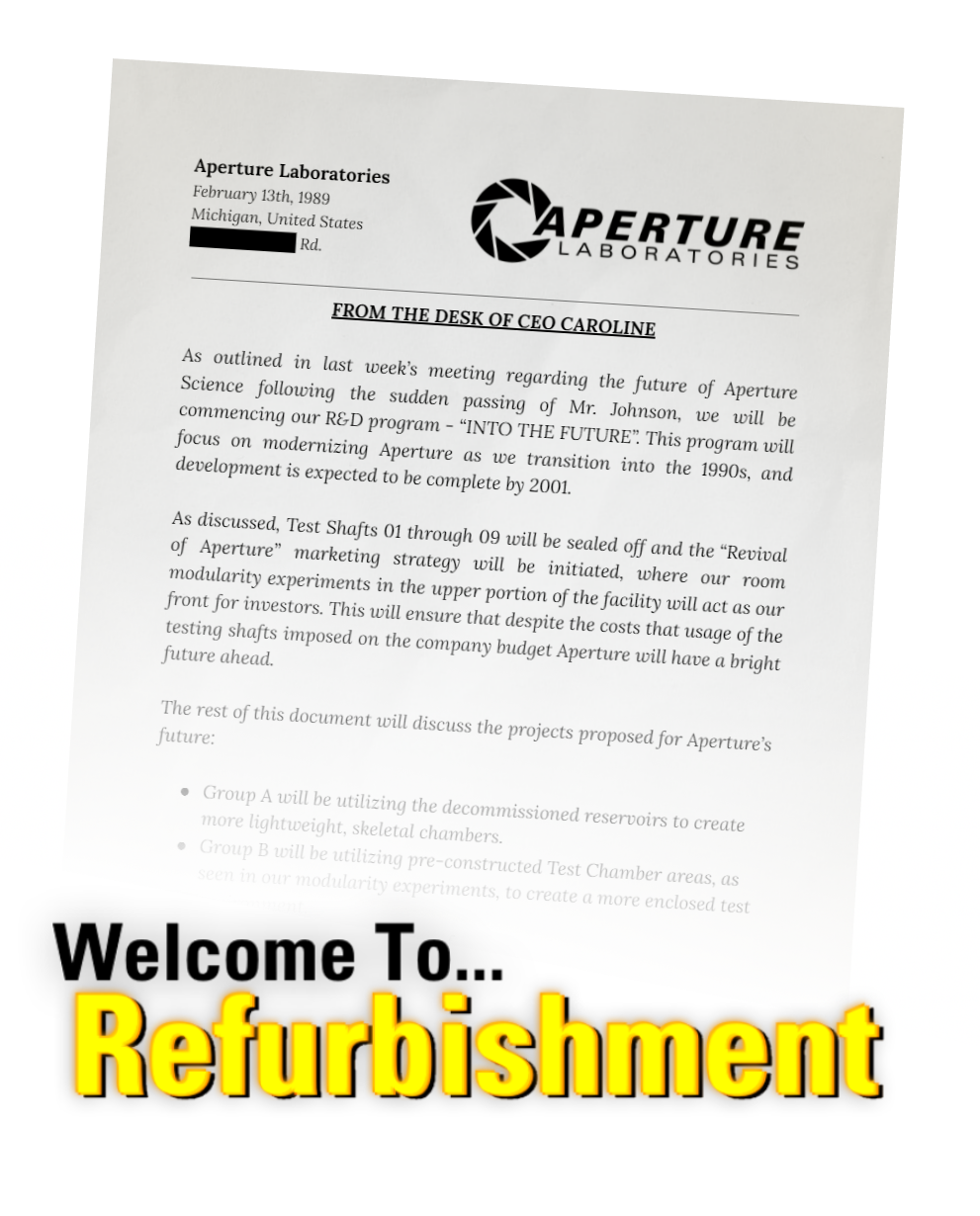 Check out the Refurbishment Showcase! - Youtu.be

It’s been so long since our last update, has it not? More than a year has passed, and so much has gone on in that time, both within the team and outside it… But let’s not remind ourselves too much about the state of the world, because something more positive is happening right now! (I’m talking about this article, of course.) 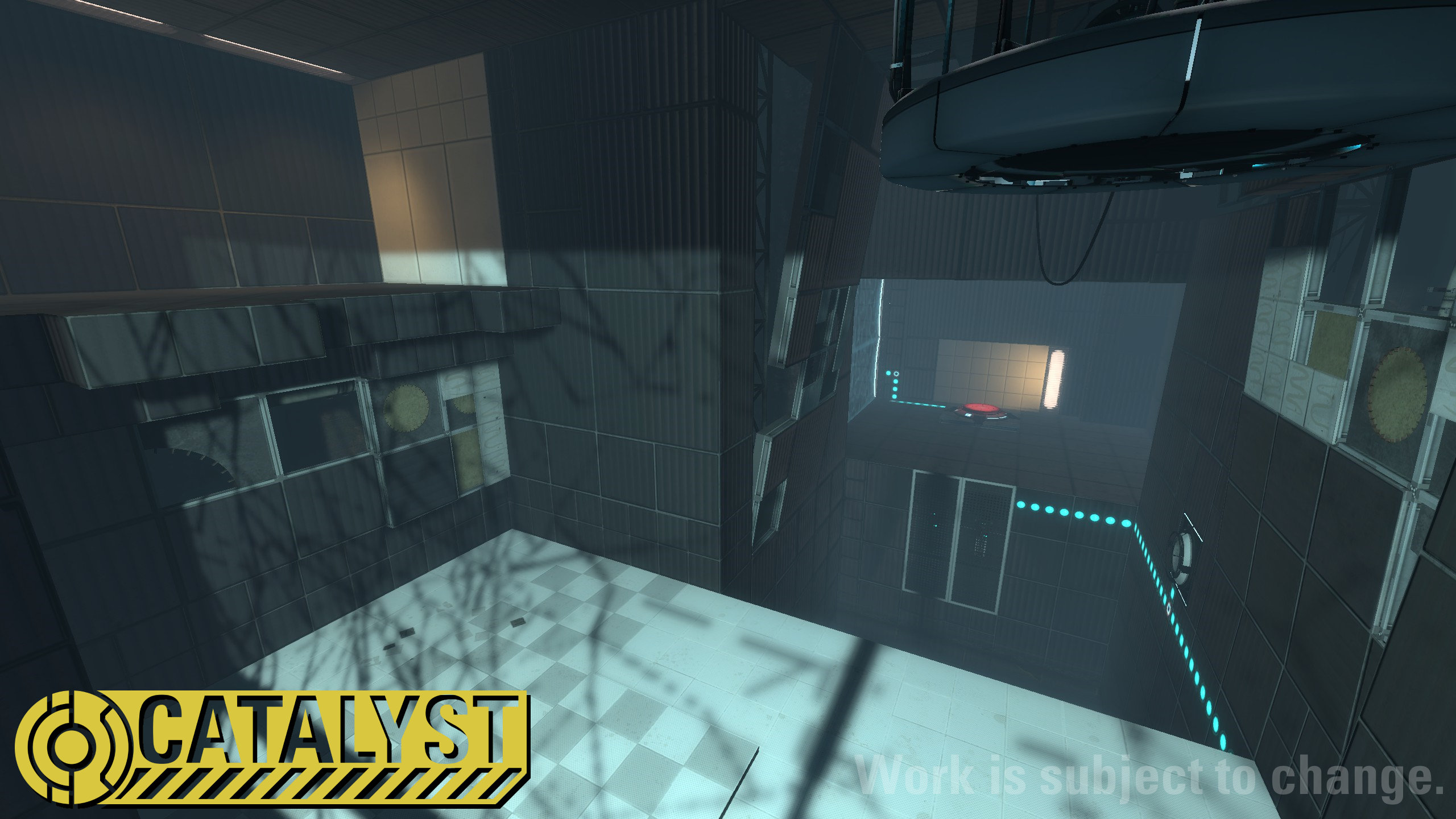 As you’ve seen in the video above, we’ve finally revealed a brand new sector of the Aperture facility that you’ll get to explore, complete with a visual theme unique to Catalyst!

Found in Catalyst’s fourth chapter, Refurbishment is unstable and battered - utterly devastated in the blast that came from GLaDOS’s death, wiping out the Aperture facility and sending it into disaster response mode. Fortunately, the chambers were made to withstand this, only needing very little power to function, ensuring that science can still be done, even in an apocalyptic scenario.

These chambers are quite close to the modular scenes we see in the Modern facility, but they aren’t quite there yet! They’ve been intentionally made with the Portal 1 aesthetic in mind that belongs to a much more enclosed, “human” part of the facility, fitting with the backstory for this area. These wall panels are still made with human hands and tools, having not quite reached that level of A.I. perfectionism and automation we’ve grown to love from Aperture Science in Portal 2.

Although, something seems familiar about this region of the facility,
does it not? 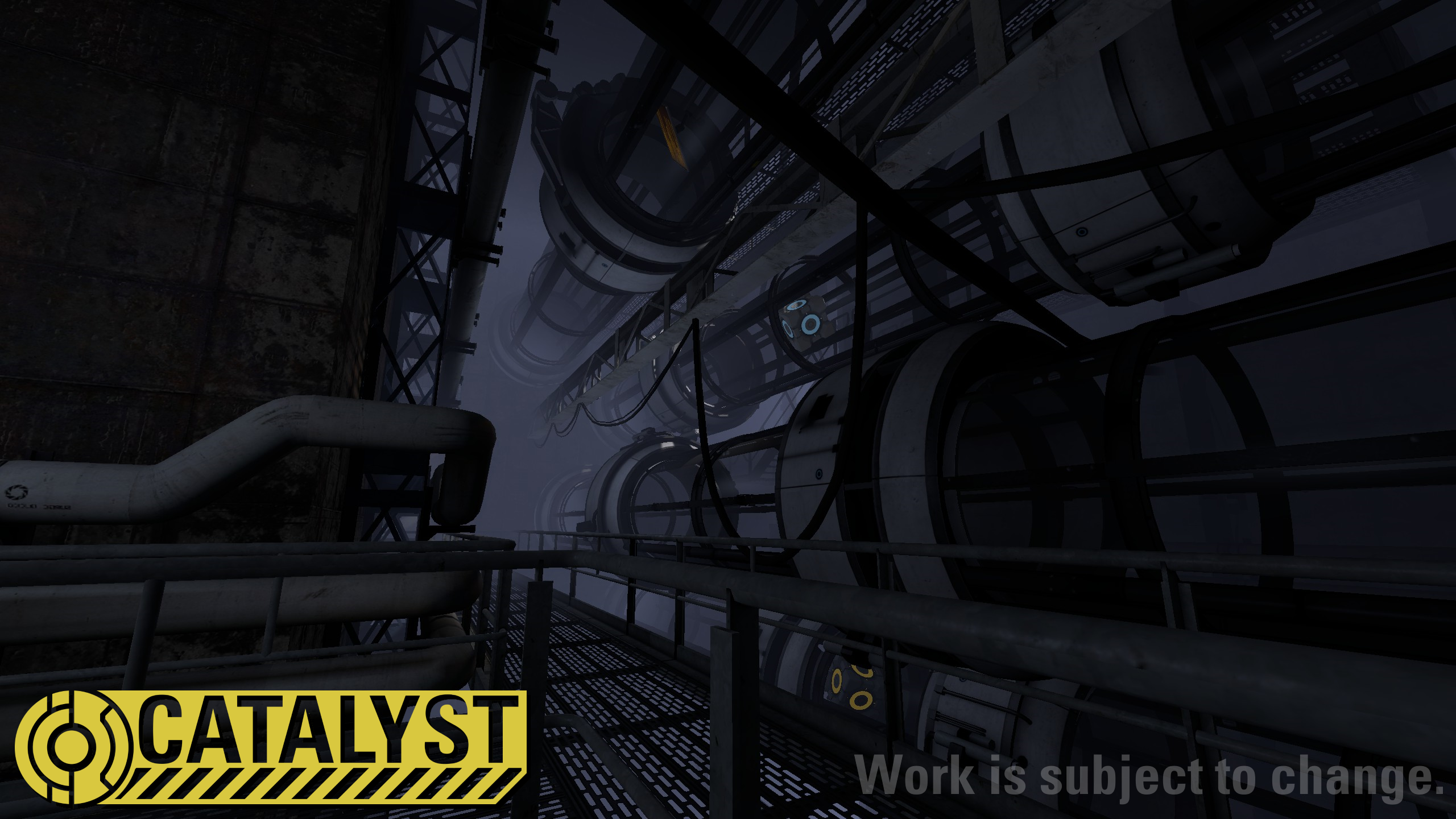 Clever followers of the mod would’ve noticed that this area we showcased a while back looked quite similar to an area in Portal 2, part of the chapter “The Courtesy Call”. And despite my insistence to have to lie - this is that same area! Something we get to do with Catalyst is explore these Overgrown areas that you see in the original Portal 2 campaign, and we think to ourselves - “What would these areas have looked like during Portal 1?” 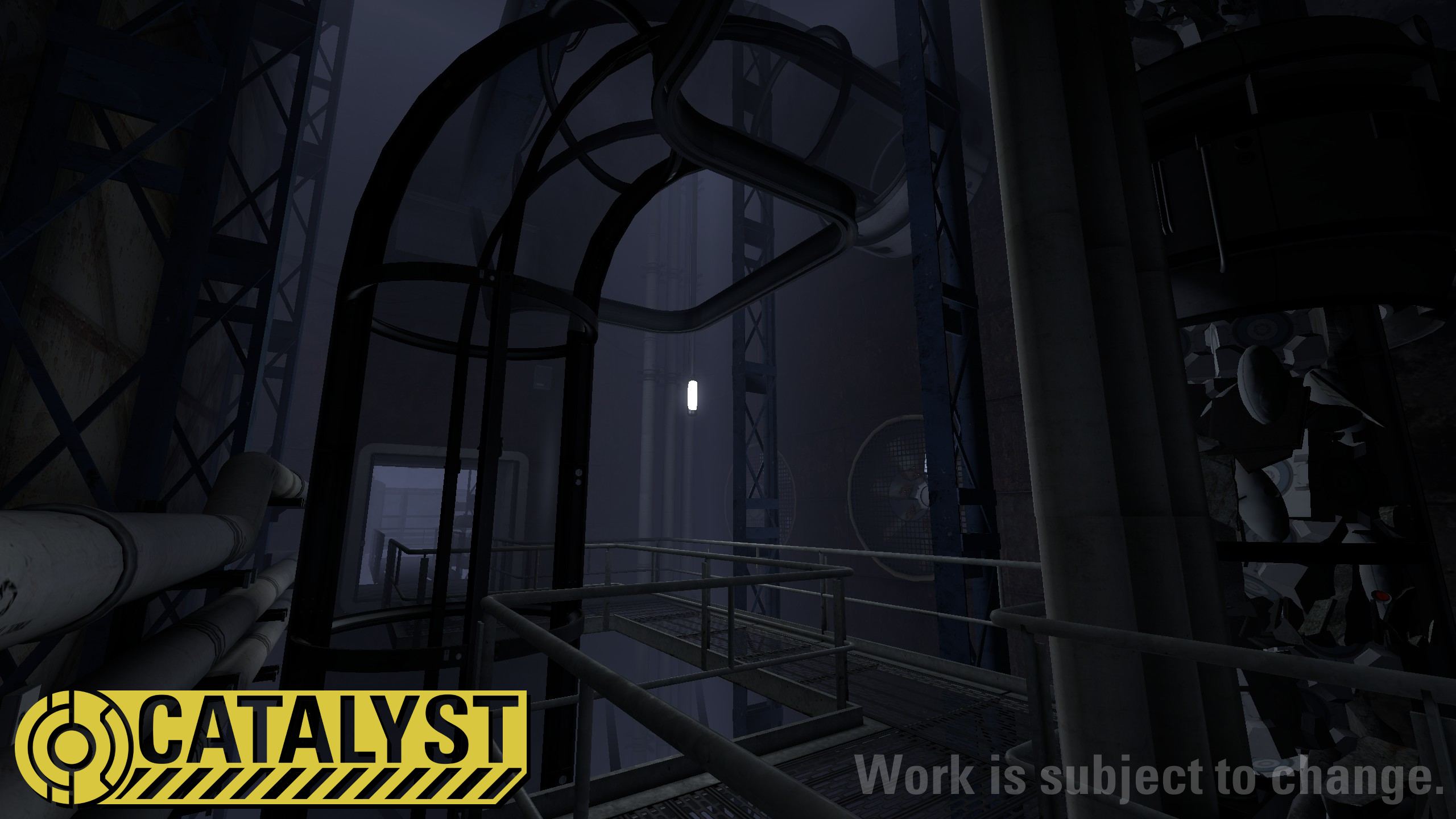 Making these chambers pristine and clean would’ve been the boring, easy approach - instead, we took the fact that Aperture is currently facing a crisis with the loss of its Central Core and applied it to this sector of the facility, one that would’ve been in the blast radius of the explosion. This creates an aura of instability in this part of the facility, as the structural supports have been weakened, who knows how long it’ll be until those ceilings cave in...

Getting Refurbishment to its current state was quite a shockingly long process; these things take time after all! So, before anything further, I’d like to bring everyone along on a little history lesson. Don’t worry, much more engaging than those that your teacher at school did. This is a trip down memory lane for how we reached the visual style we did. You could even consider this a look into how visual styles develop in Portal 2 mods!

Originally, Catalyst in its earliest days did not feature this portion at all - Portal 2 elements such as Lasers and Hard Light Bridges would’ve been forcefully shoved into the iconic Portal 1 aesthetic, which would’ve raised a lot of questions we did not have the resources to answer.

So, at a very early point in development, we decided that this wasn’t worth pursuing, and scrapped it quickly. We did however feel the need to explain a logistical gap between the two eras; it’s the mod’s premise after all! How did Aperture go from the piston based modularity of the Portal 1 aesthetic to the bizarro science facility we know it is in Portal 2? There’s a missing link at play here, and we weren’t sure of how we would bridge the gap.

We turned our attention to one of the only pieces of post-Portal 1 media we have at our disposal; the Lab Rat comic. Considering that this comic has scenes set right after the ending of Portal 1, we took a peek at what we could potentially be inspired by. 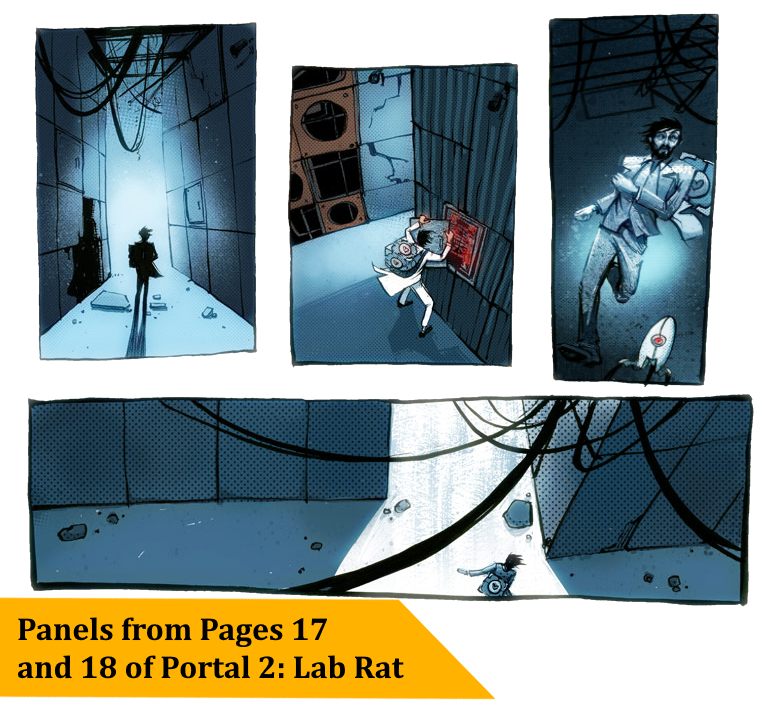 We had begun to notice parallels between this area and something featured in Portal 2 - the Overgrown levels seen throughout the first chapter feature the elements of human construction that the iconic Portal 1 areas are known to have, and immediately, it hit us. We were going to make this chamber style the predecessor to Overgrown; it was quite literally our missing link between the two Portal games!

The following images are in chronological order of Refurbishment’s development. While its conception had occurred in 2019, it was only until 2020 that we started to formulate visual concepts for it! 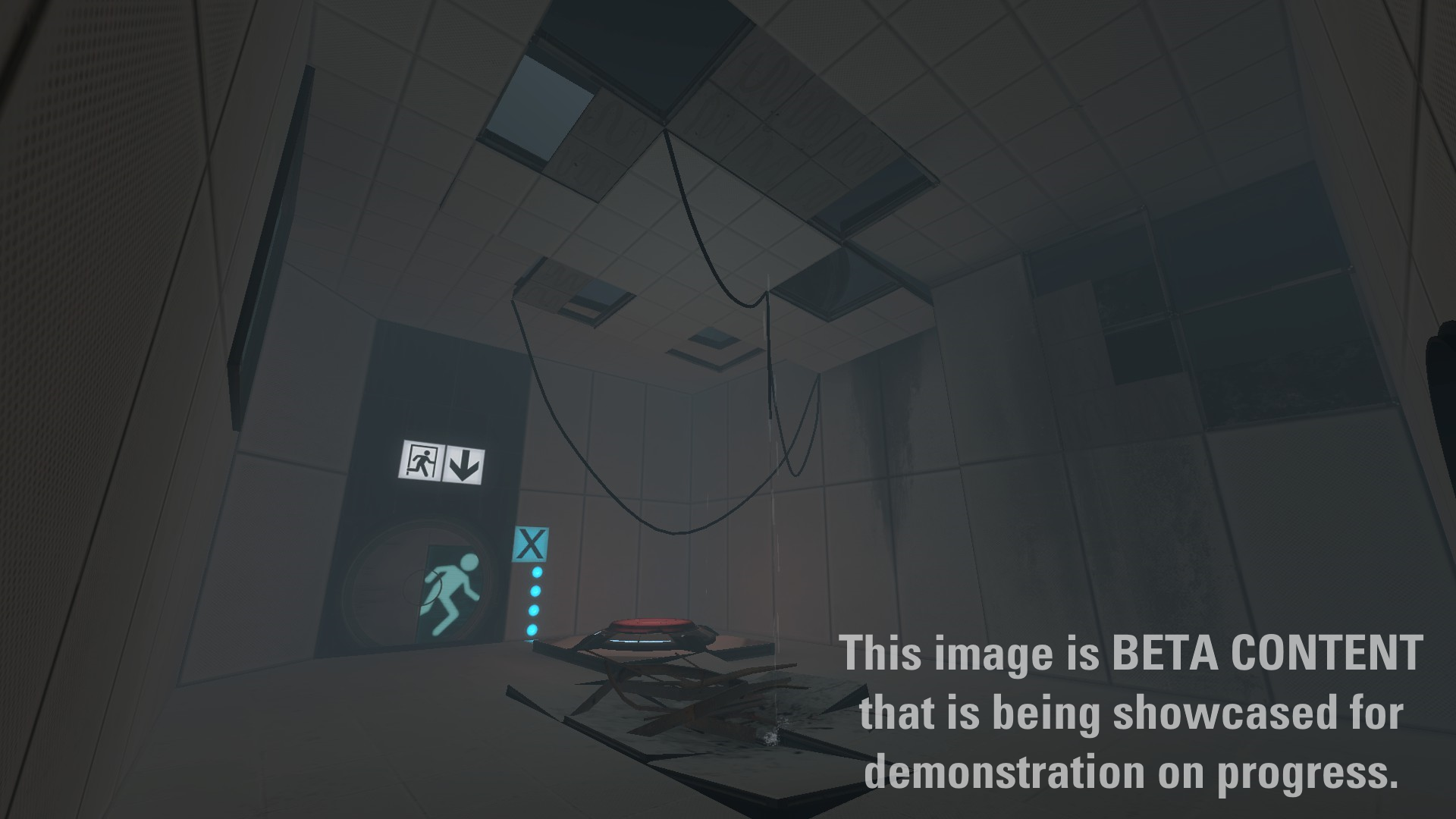 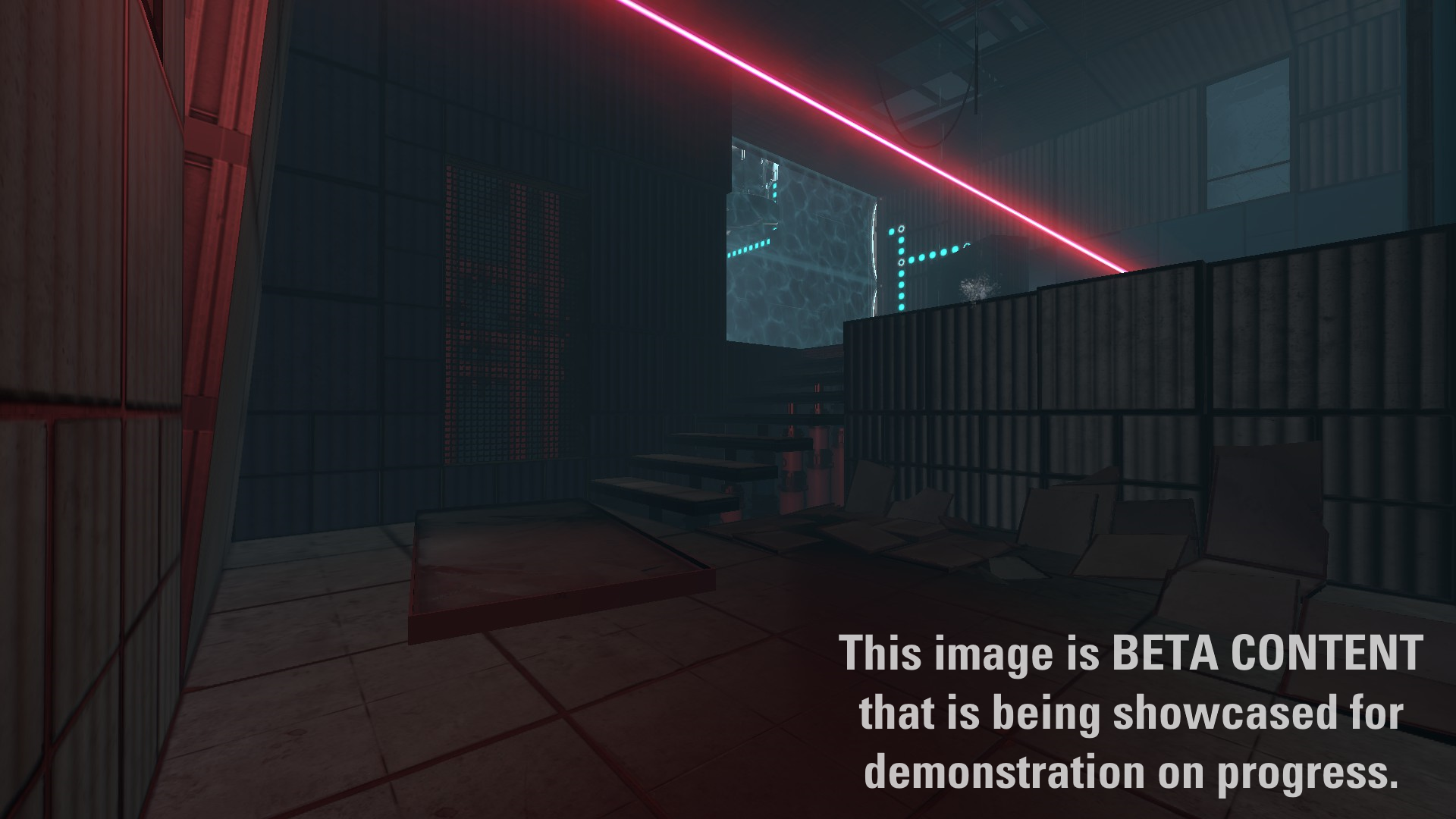 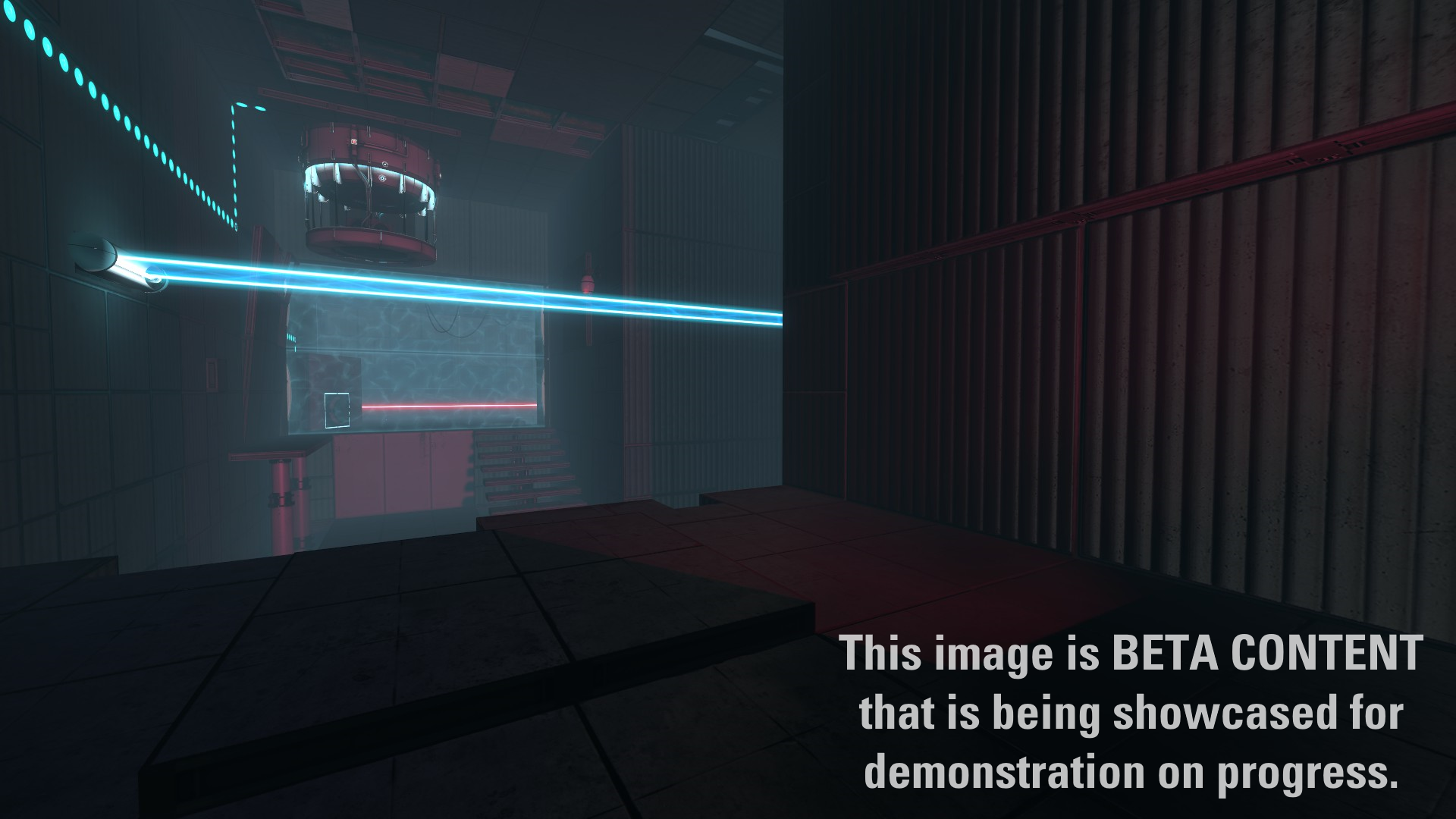 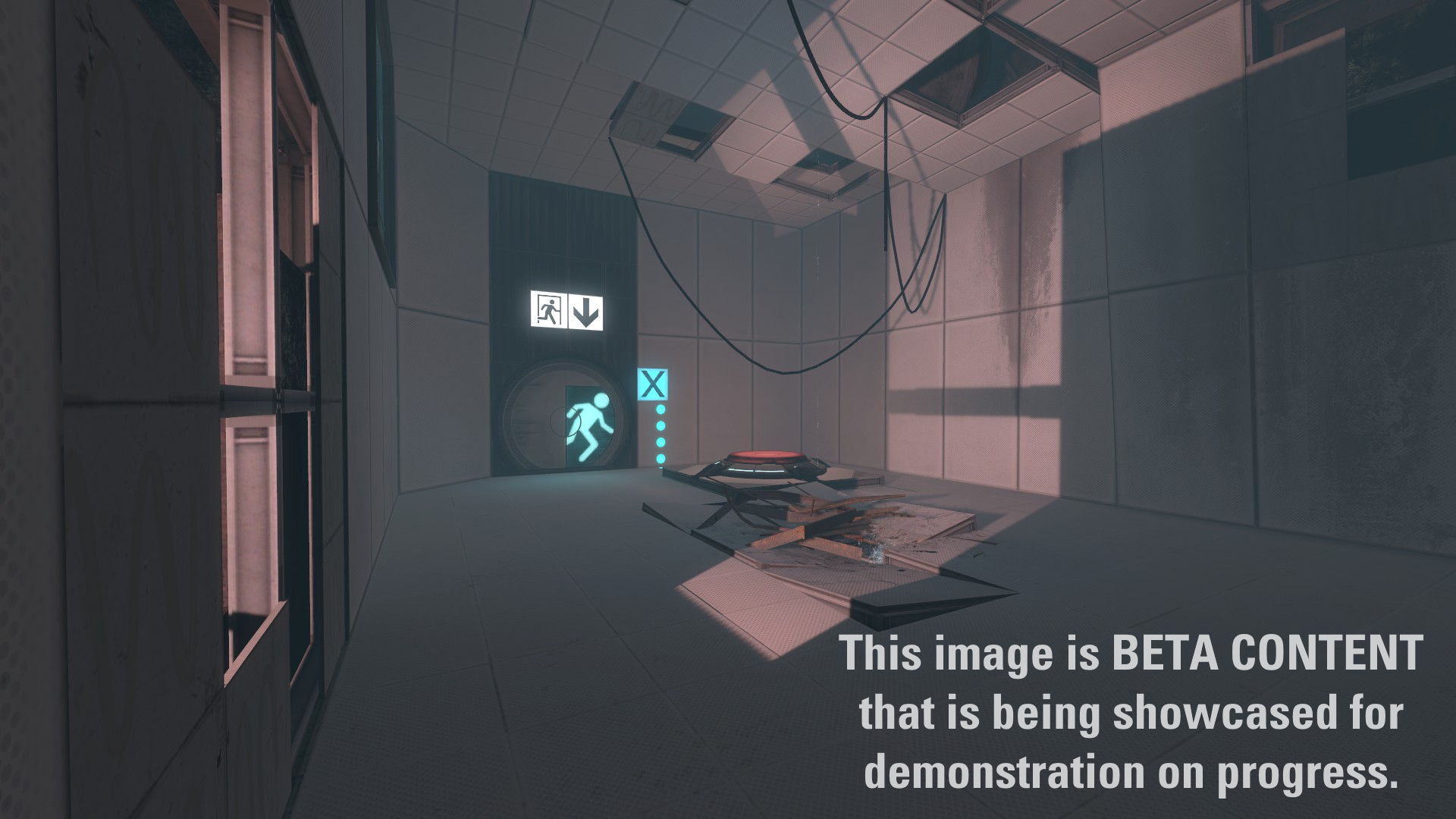 After a while however, we decided that this original aesthetic had a major problem. It was too dark! Test Chambers were to be solved in this environment, and it being this dark would seriously impede the gameplay.

So we went back to the drawing board, and we eventually landed on changing the main colours of the theme entirely, bringing in the yellows of the sun and starting to brighten up the chambers. 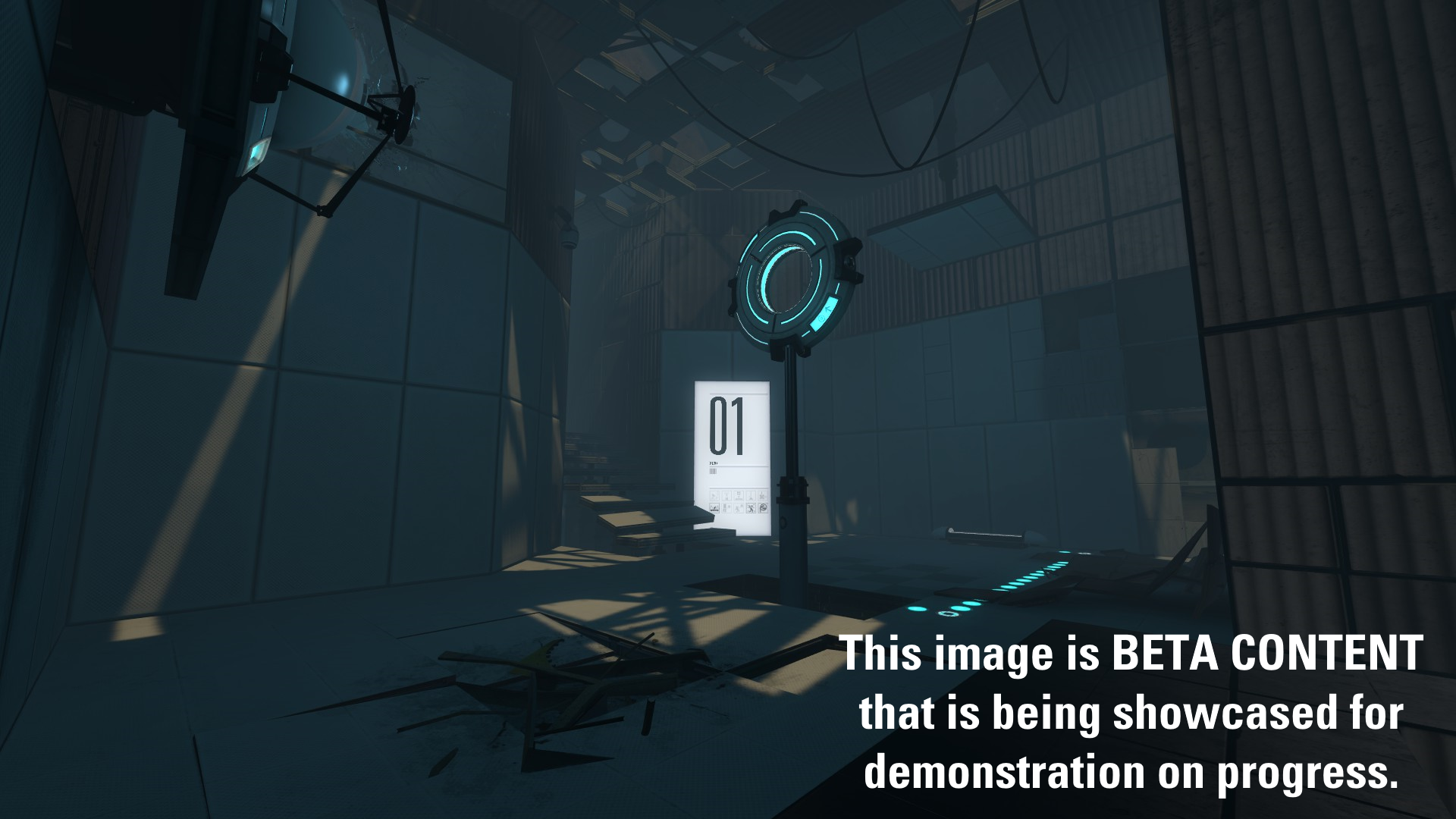 We had decided to truly bring out the roots of Overgrown in this style, emphasising how abandoned and derelict this area of the facility is, removing the relatively pristine nature of the theme and going much harder on its destruction. 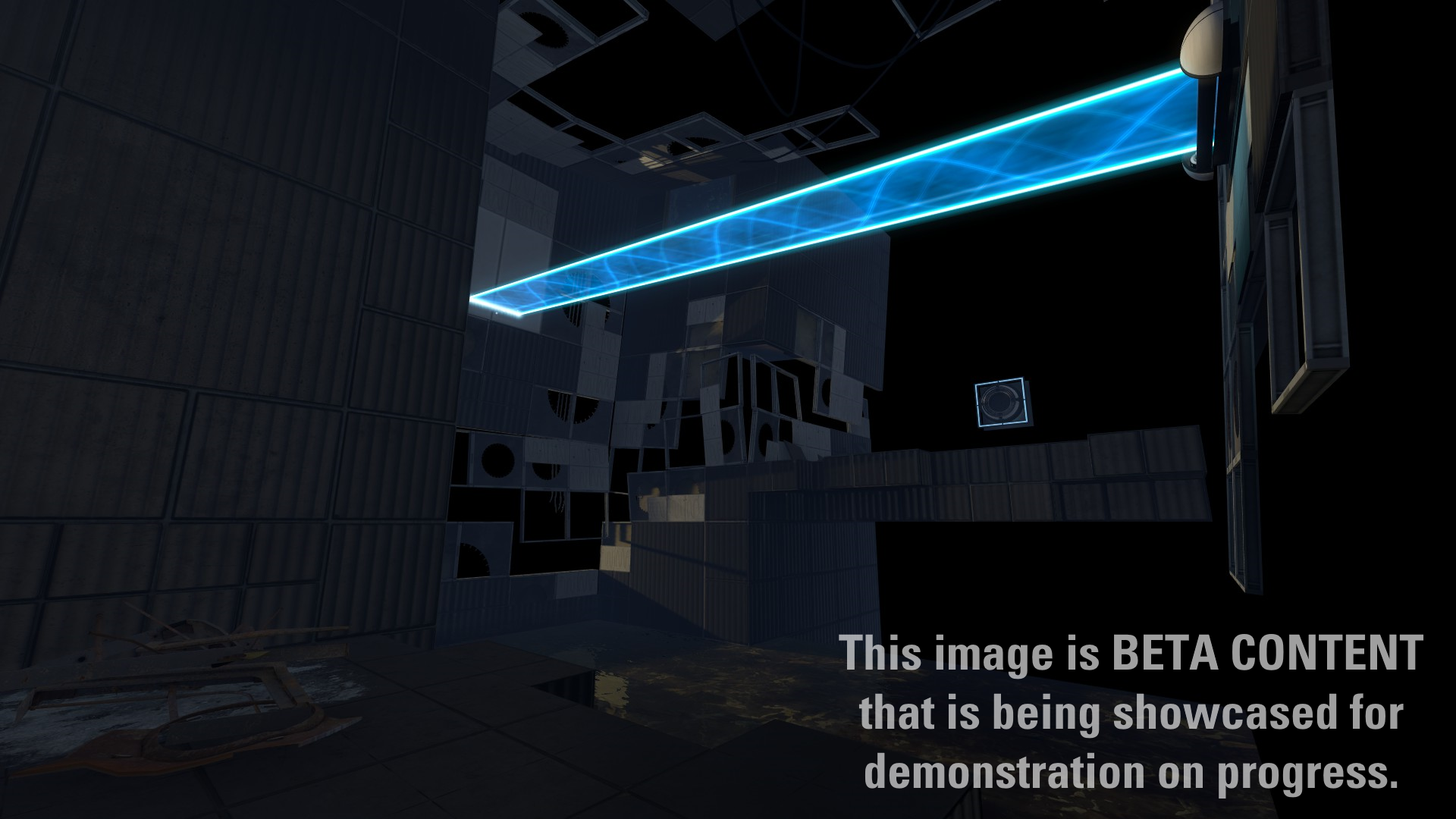 And after a lot of refinement,
we ended up landing on the look you see now! 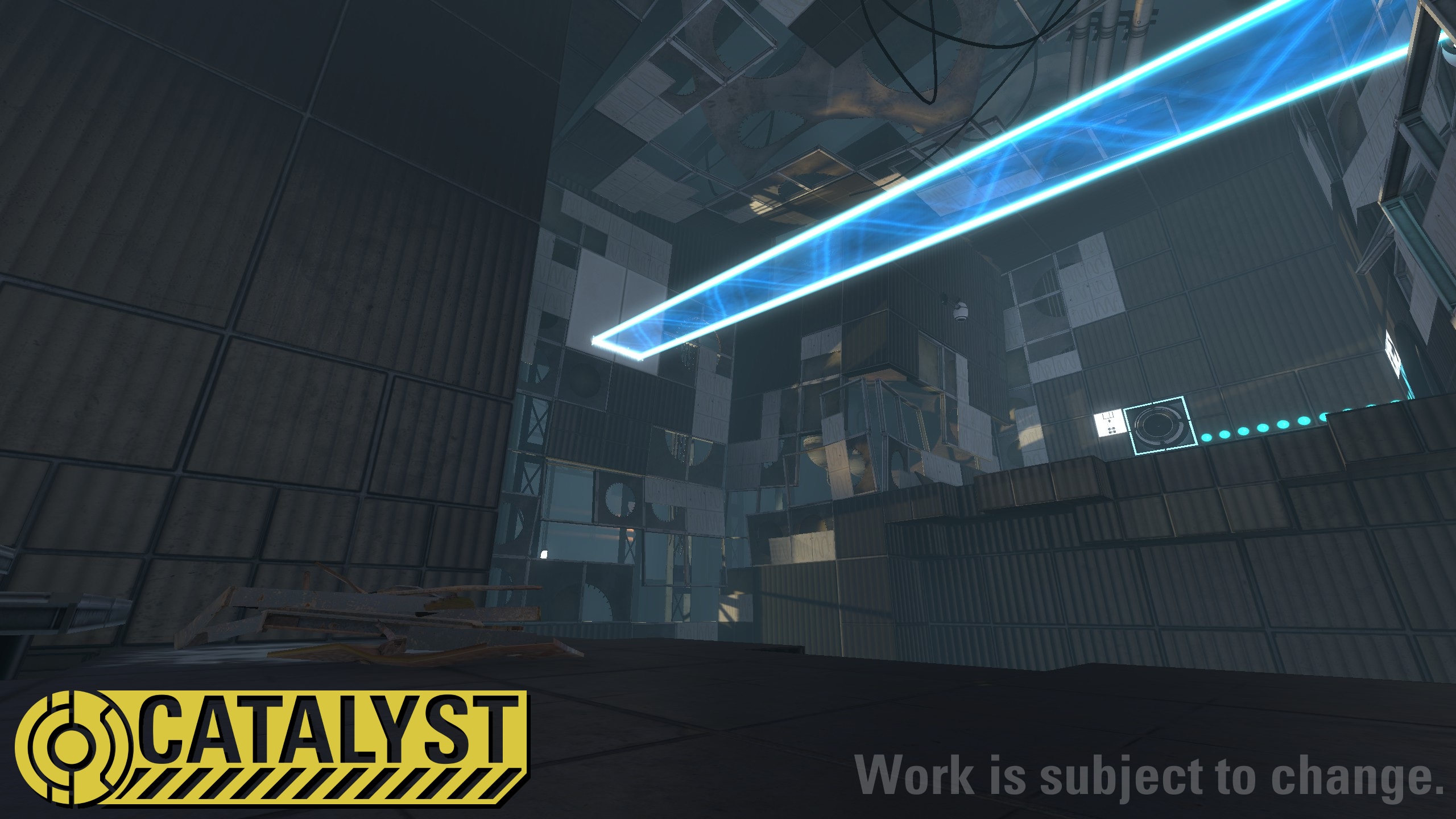 I have to give a special shoutout to Adakam, a former member of the team. She was essentially the backbone of Refurbishment’s visual conception and responsible for the theme we have now. Without her efforts, there’s no way we could’ve landed on the style we ended up going with in Refurbishment.

Catalyst’s soundtrack is primarily composed by Permatemp, our main musician on the team. He created the track you hear in the video - 1.1 Volts. This track aimed to capture the nature of Overgrown, while at the same time, lacking its natural beauty, as plants can’t overgrow the Aperture facility in mere seconds after GLaDOS is brought down by Chell.

You can listen to the full song here!

When it comes to the future of Catalyst - progress has been going at the best pace it has in months! Let’s go over some of the highlights:

Oh, and as always… 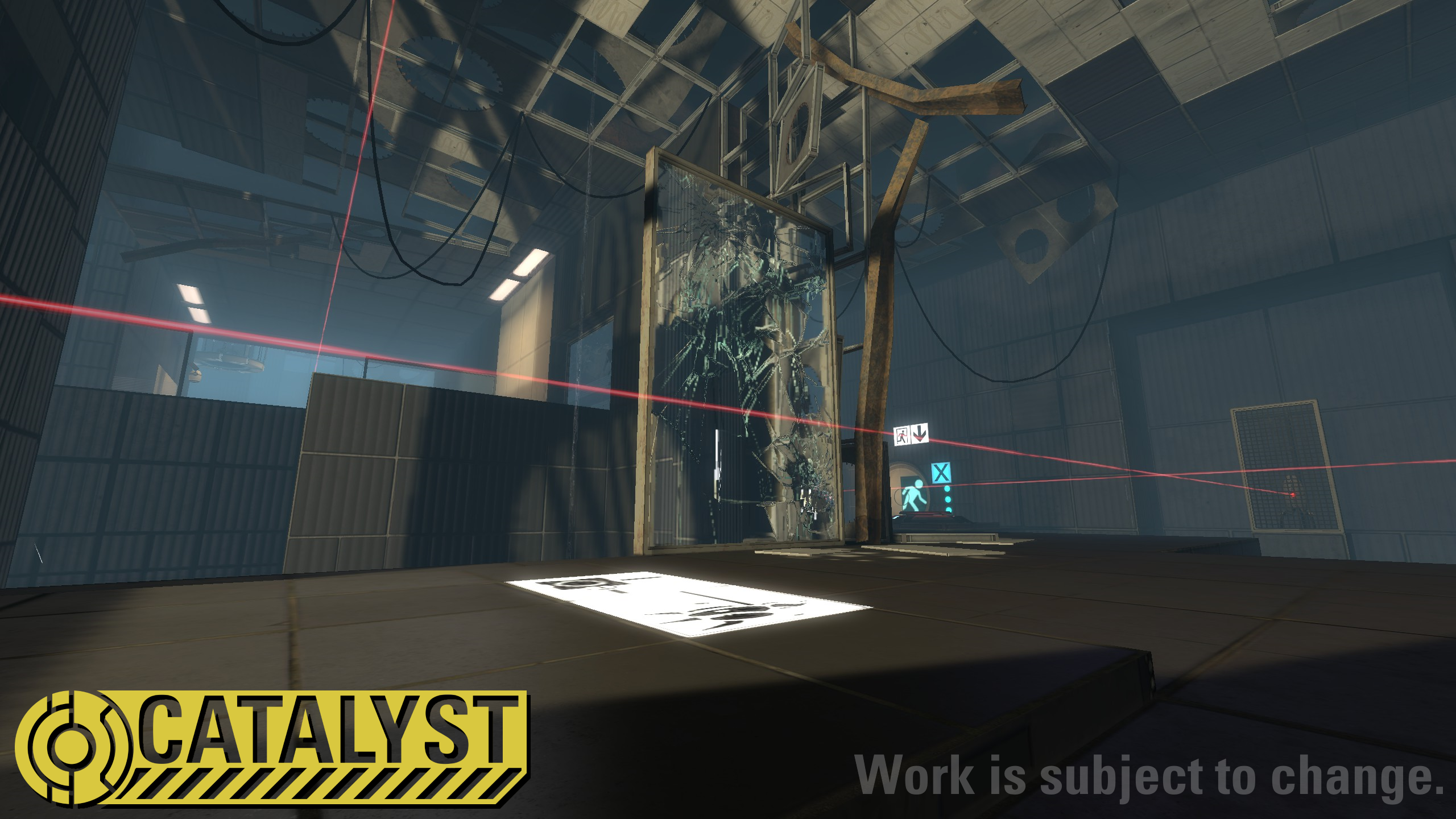 Portal: Catalyst is looking for new volunteers! We are currently looking for Level Designers, Modellers, and Concept Artists! If you’d like to assist us in the long journey of development, send us an application through here! - Forms.gle

And so, the Refurbishment Showcase now comes to a close. We humbly thank all our followers for sticking around for as long as they have without any proper showcase for such a long time, and we hope you enjoy what we’ve shown off! Be sure to join our Discord if you haven’t already, and also give us a follow on Twitter!

B-Name Studios wishes you all the best,
as we head back to work… 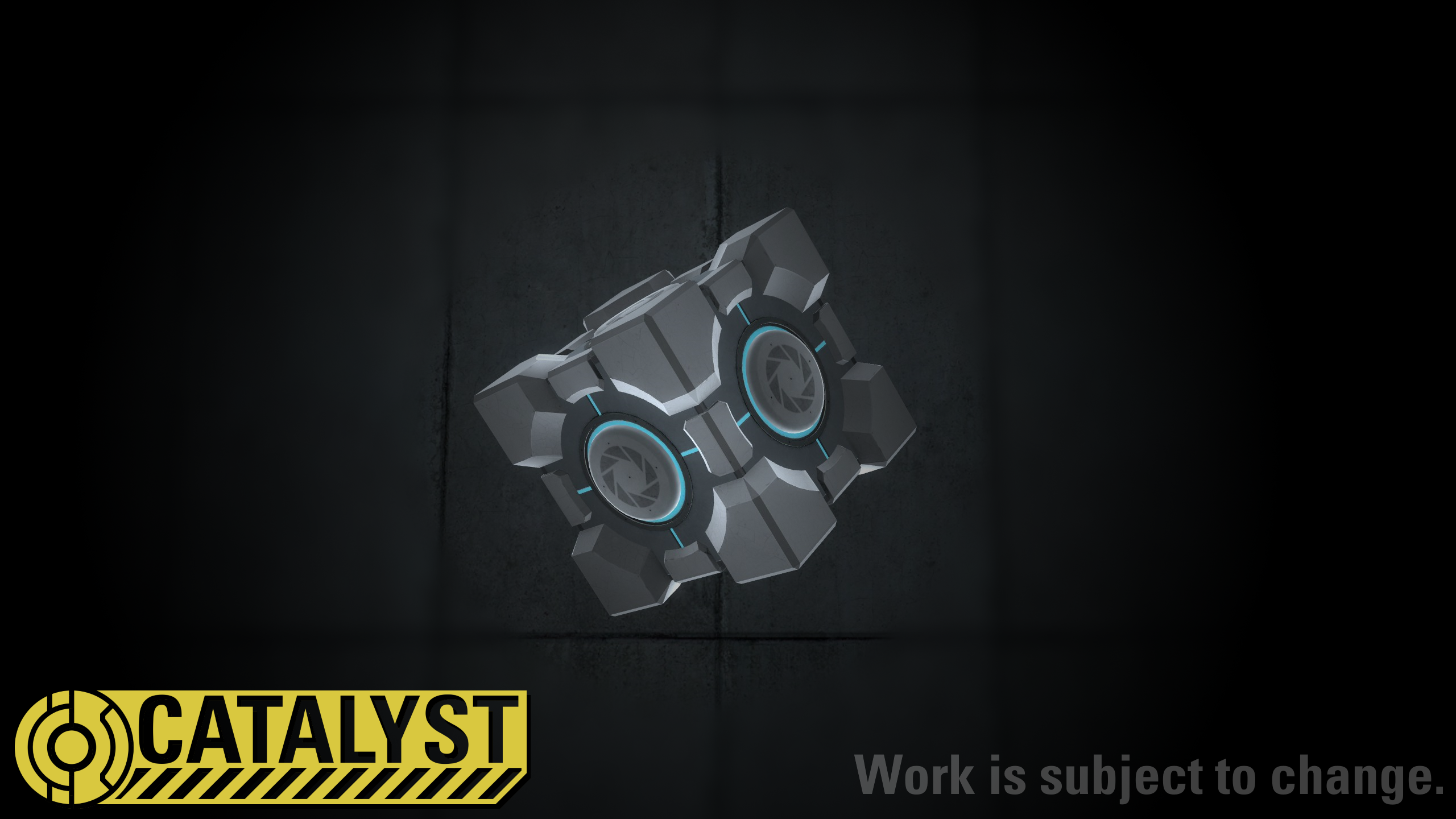 …To something more familiar.

Come join us as we recap on everything that's occured over the past year of development, and as we reveal new exciting announcements!

From the creators of Portal: Epic Edition comes this Conversion-inspired thing.

We're still alive, don't worry! We're getting closer to getting our new showcase out :)

We announced a media showcase for Q1 2022 showcasing one of our brand new styles! We've cancelled our Construction Style showcase in favour of something much more achievable to show off :)

sooo. any updates in this year?

forget it the mod is dead

The Other Way Portal 2