The first focuses on Greek Hegemony, allowing you to play as any one of seven Greek City-States in a quest for dominance over all of Greece and beyond. Although you begin the campaign in a shaky alliance with your Greek neighbors, due to the Persian threat, it is only a matter of time before all hell breaks loose in a fierce fight for control.

The second campaign better simulates the main focal point of this modification; that being the Greco-Persian Wars. In this campaign the seven Greek City-States are fully united in defiance of the Persians, allowing you to muster soldiers from all the cities right from the start.

Not only can you play as Greeks and the mighty Persian Empire, but in both campaigns you can play as any of the following factions - Celts, Illyrians, Scythians, Dahae, India, Gerrha, and last, but not least, the Kingdom of Macedonia.

Macedonia is also a major highlight of the modification, because it is the only faction that can experience a military reform. This allows you to transform the small Macedonian state into a powerhouse, perhaps one that could even challenge the great Persian Empire!

The world is yours, take it!
RSS Articles

Take a look here at some earlier instances of Persian Invasion: 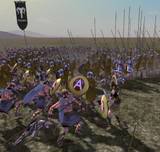 PI would have probably remained in it's beta state if it hadn't been for a mysterious modder named Lanjane who suddenly showed up and completed all of the unit cards, and did some other tweaking to boot. The most lacking part of the beta was the absence of unit cards, and, as any player of Rome - Total War knows; they are a simple, yet completely fundamental part of the game.

Some of Lanjane's unit cards:

And so, I finally forced myself to delve back into the files and fasten together these pieces to complete the project that had been haunting me for so long -

Persian Invasion makes a comeback due to the efforts of Lanjane! All credit goes to him for this patch.

The time has come; the BETA of Persian Invasion had been released!

Near final version of the Persian Invasion map by Comrade General.

A new faction : Macedonia has been added to Persian Invasion!

This is the complete edition of Persian Invasion! Exract the file to your desktop and follow the installation instructions in the included readme, but...

There's a bug in custom battles when you try to add a settlement, it instantly gives you a CTD with no error message

The name of the folder can't be changed to something different, because then .cas files will not work. Because of this, this mod is incompatible with the mod Paeninsula Italica, which has exactly the same name for the folder (PI).

Can you please change the folder of the mod to something else? for example "Pinv" or "PeI"?

What i do is i rename manually them whenever i want to play each mod. A quick fix would be a batch file that renames them and executes each time you open it but i dont know batch files syntax to create it

The mod is great, however, there are no trade resources. Plus, in my opinion, Persia needs more units like "Hyrcanian Cavalry", their own elephants, and there archers and mounted archers and the chariots should all have long range missiles.

Not sure if i'm going to get a reply here but where exactly am I supposed to insert -show_err -mod:pi ???

You make a shortcut of RTW and in the properties add next to it '-show_err -mod:pi'. Hope that helps.

hello everybody,i have a big problem,when i try to fight on the battlefield the game failed,sent me an error like we can't found the battlefield map or landscaping,please help(sorry for my bad english)

when trying to view Persian capital I get error cant find...

This should have not read the ## from the script so I found the file
new_standard_parthia.tga.dds

COPIED it (do not just rename) and then rename the COPY to
##new_standard_parthia.tga.dds

you can also fix this in the script but its easier this way round as people can make less mistakes.

Whenever i try and start the game it closes,i have followed all the instructions and installed the patch,what am i doing wrong?

i have an error
Failed to read texture ...... unit_persian_immortal