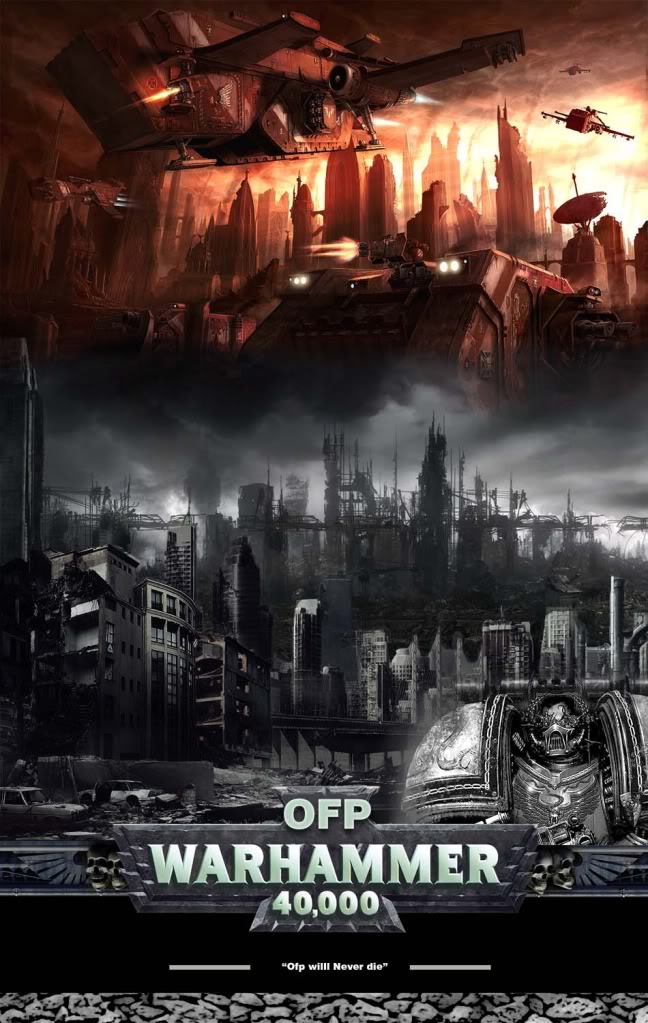 Good day people of the Imperium of Man.Some of you may Know the Mod already, and some of you may not.To the ones who do know of the mod and play it ... we thank you for your support.To the ones who do not know of the Mod , here is the LOW Down.The OFPWH40K mod is a Warhammer 40k units on a FPS PC game of Operation Flashpoint.We , The Team of OFPWH40K wanted to play WH40K in a first person shooter ever since we first saw the DOW game from Relic.Back in 2003-2004 some people made some Space marines and some Tau , and some Imp. Guard unit, with land and air units.There seem to be no action to this until 2008 when the KNOW how and more people asking for this mod to come out.With some permissions and some begging , we were able to get the MOD up and running as you see it today .We do Not claim to Fame of the Units, or the NAME from GW/THQ/Relic in any way .This is just a MOD to play in the WORLD of 40k as a first person shooter.The Game engine that we use does have its limits .One of the limits is that Vehicles Can not have Multi-turrets , so Lemanrus and Bainblades and other ORKY vehicles may have 3 or 6 gun mounts , but for the most part, all weapons fire from the main weapon. ( this will not change unless the game engine is redone , and that's not happening any time soon )The mod you will find units of the Space marines, chaos marines, Imp.Guard and chaos guard, Tau, Eldar, Dark Eldar, ORKS, and Necrons.There many Maps to play on, some new maps and some maps of OFP that were converted over to a wh40k look/feel.For the Most part, 90% of all maps we have are LARGE ISLAND maps, 100 km square in size.There are a few maps that are shoe box type ( 1500x1500 meters ) give or take an Inch.There are some Campaigns for the MOD, along with many SP and MP missions.The mod is being worked on ever day by the Staff, everything from models of units vehicles to troops to map objects such as trees and buildings.We also have people who are working on scripts for the game, If any one know OFP they know what I am talking about.For the ones who don't know , the Scrips that we are working on are script to make units spawn in and out when they are needed , and to set up nice FX stuff for mission makers to make nice missions.Well that's all for today.
LFH
Articles

I played this mod a while ago on an older machine, and I wanted to pick it up again for fun, but the only file I can access from the Tapatalk.com link is the 3.1 and there's nothing there saying I can play it without the 3.0 file. It's been a while, sorry, so I can't remember what was necessary to play again. Just checking!

I got a response, and just in case nobody else sees it, here's the updated link to the 3.0 file.

Hey. I just had a quick question about a problem with the bolter sounds for the space marines. For a while everything was working fine with the sounds but now all standard bolters for the chapters have no sound. I was wondering if this is a problem on my end or a problem with the file. I have attempted to re-install and I have deleted the other bolter.pbo in the 3.1 folder but the problem persists. Thanks in advance for any help you can provide

WHAT ARE YOU GUYS DOING WHY DID U REMOVE ITTTT

The DL Links are working.

Nooo! I was hoping to play this one day and now the files are gone! Lemme guess, they struck you with a DMCA? I bet they did....

I can't tell you what happened to the files. But I do know it's been a while since the mod has had any major maintenance. Don't expect too much at this point.

I doubt it's anything to do with DMCA requests.

What happened to the files?