"It was the 23rd Century: mankind’s darkest hour."

That is what we have thought for centuries but we were wrong. A new threat waiting for aeons has moved out of the dark. We have seen them, we have fought them, we have gained an important victory but we were not aware that they were not the only ones hiding between the stars. Now we have stumbled into a galactic war that had been raging ten thousands of years.
Mankind on the loosing side, in the middle of Crossfire.

The Crossfire Mod is by far the biggest and most complex Freelancer modification available. For many years this mod is known for highest quality and innovative ideas which we have introduced to the Freelancer modding scene.
With Crossfire we have build and extended an universe based on the original Freelancer game and its story. Realism and a logical development of the quest based storyline and the game environment such as the systems and the technological development is most important on this mod. Crossfire is not a static mod like most others, it is a dynamic developing environment with dynamic economy, dynamic universe, destructable solars and download content (DLC) which introduces new quests, new ships, new systems and new equipment.

Most important in this mod is the atmosphere.
High quality graphics, high quality music tracks, more than 150 very detailed systems, new voice samples, stunning effects, many challenging quests, ten thousands of small side stories and rumours, fantastic gameplay and hundreds of cool ships. That is the Crossfire mod.

Crossfire continues the epic adventures of Edison Trent. Get ready for a brand new experience in a breathtaking and extraordinary environment. This mod is the unofficial sequel to Freelancer with the most stunning graphics and worlds you have ever seen. Jump into an atomspheric universe full of surprises, challenges incredible adventures. Experience the awesome gameplay, highest quality and unique features of Crossfire.
With several hundred thousand downloads, four Mod Award Nominations and it's very large fan community Crossfire has developed to one of the most favorite Singleplayer and Multiplayer mods for Freelancer.

The Mod of the Year Awards is a late wake-up call and a harsh reminder how little I actually managed to update the status of the Crossfire Mod here on Moddb over the past months.
The last info was published one year ago and due to the ongoing pandemic situation free time was sparse. The real life work situation and family just demanded more time which forced me to prioritize with what to spend my little remaining time. I focused on handing out the information on our official forums, our discord server and most importantly actually working on the mod. Moddb fell short on updates about Crossfire.
I apologize for that.

Better late than never, let's talk about Crossfire in 2021, the Blackstar Fleet update and take a look at what to expect in 2022. 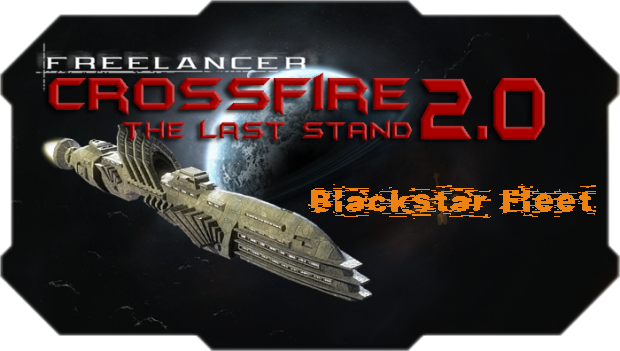 Last time I announced that I can not set a fixed release date for "Blackstar Fleet" due the real life situation and also changes I wanted to introduce and test, prior pushing out a big update like that.
As a result I released the highly demanded capital ship rebalance early in 2021, which originally was indented to be part of the Blackstar Fleet update. With that also many known bugs were identified and eventually fixed. This early release gave us the opportunity to get player feedback and prepare further improvements going into that direction.

In October another big update was released, dealing with a set of bugs related to newer DirectX versions, improving parts of the render engine and introducing a new customizable shader system. The conflict between automatic launcher updates and custom settings no longer exists, which gives players thousands of new custom visual options. 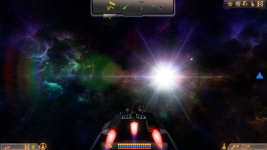 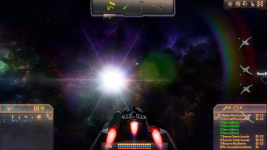 In the meantime the scope of the original intended Blackstar Fleet update has changed again. I discussed this topic in detail on the official Crossfire Mod forums. If you are interested in participating in the ongoing discussions about the Crossfire development you can find a link to the forum at top of this Moddb profile.
Long story, short: We are no longer talking about a content update with the size of the "Lost Fleet" or the previous bonus missions. Blackstar Fleet has grown to a size similar to step from Crossfire 1.9 to Crossfire 2.0 and that is mildly said huge.
Next to the already announced story content, new systems, new factions, etc. I started to give older content a significant facelift. 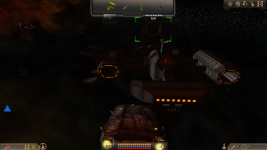 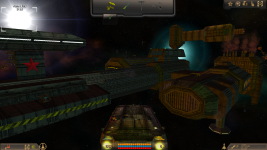 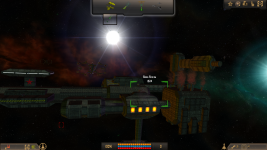 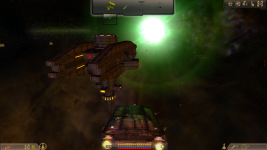 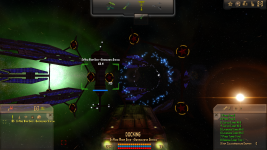 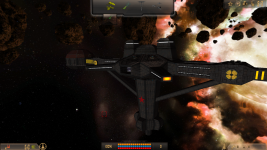 Big parts of the Sirius sector will get a visual upgrade, the Altair sector will receive a big content update, the in "Lost Fleet" update introduced systems of the Sol Sector will get new details which will add new variety to the Renaissance faction.
Some of the already existing story missions will also receive an update in order to provide a more reliable experience.
I have collected much feedback from the players and we will take care of everything that is technically possible and which won't break something else in the game. Maybe not every wish can be granted but I will at least try. 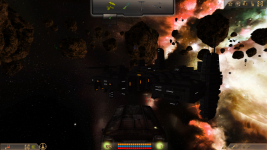 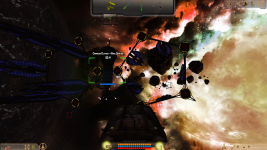 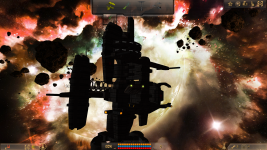 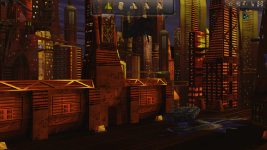 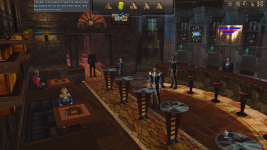 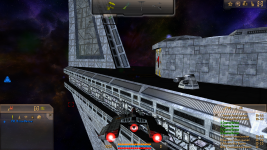 Since the ambition behind Blackstar Fleet got significantly bigger, more time is needed to get all the work done. We currently make good progress, adding our newly created assets into the game, doing lots of fine tuning etc. but still can not tell exactly when the new Crossfire version will be ready.
Instead of letting you wait without anything new (besides the two already released updates this year) we have the intention to release some of the already done new content early.
And with early I mean in the next few weeks.
In order to avoid story spoilers I will have to carefully pick the content to be release but... hey...

Merry Christmas and a safe flight, Pilots.
Stay healthy. Keep at least a few meters distance to the other ships, cockpits closed... you know the drill.

It is safe to say that 2020 was a very turbulent year, sometimes with some unpleasant surprises waiting around the corner.We are living in a difficult...

The in 2019 released "Lost Fleet" update opened opportunities to release more story related content for Freelancer Crossfire without interfering with...

What can you expect from the Lost Fleet update? Aside from the many improvements on Crossfire 2.0 new story content is available which tells the tale...

Lost Fleet is going to continue the Crossfire bonus missions and will open a new world for the players to explore. Main focus will be the Sol sector and...

The 10th and final chapter of the famous Crossfire Mod. Stunning graphics, a large universe and 45 new singleplayer missions are waiting to be explored.

The 10th and final chapter of the famous Crossfire Mod. Stunning graphics, a large universe and 45 new singleplayer missions are waiting to be explored.

The nomad conflict was just the beginning. Years passed by, alliances formed and the enemy returned. The war has just begun. Get prepared for the Dark...

Crossfire is the largest and most complex Freelancer mod on the net. While it sticks with the original Freelancer gameplay and style it extends the game...

This Patch for Crossfire 1.7 does fix a codepage issue with different OS version. The Crossfire 1.7a Patch is an optional update for players which have...

This is the download of the Crossfire mod version 1.7 For years this release of Crossfire has been one of the most successful Freelancer mods.

Got a Graphics issue, playing through SP now, and I cannot see the badlands when approaching to destroy the pirate base. Visually its just not there, when I get inside it, it comes up a bit but kinda annoying not seeing the cloud from a distance. Is there someway to fix this?

Howdies great CF 2.0 staff. Where is the official forums website located ? I'll update this comment once get reply to prevent flood here as i like to do sometimes :P Had one other question before this forums location, but noticed from Full Release client's comment area that FLMM not required :) I have the FLMM 1.5 Beta client, but now that no need to use it for latest full CF 2.0 weehee. Good Thorsday o/

Hello guys I have a question, when I am finishing mission 12 and dock in Toledo, it automatically tells me mission finished, it advances me to level 34 and takes my ship, is this part of the game? Then the crossfire campaign begins? Or is it a mistake? Thanks!!!

You have OpenSP active on the Launcher

I'm having the same issue here. When I land on Toledo to complete Mission 12, my ship gets changed to a Starflier and my Level goes from 17 to 45.

For some extra information, my loadout before completing Mission 12 is as follows:

Deactivate the OpenSP on the launcher.

if I have a save with the game story finished can I play continuously or do I have to replay the game?

Greetings all,
Thoroughly enjoying the mod except for one gripe - the level requirements. I'm not comfortable with grinding through 5+ missions to progress the story. I simply don't have the time or the patience to free roam for that long.
Is there a config file or a modification I can perform that would reduce the level requirements by about 50%? It's simply too much at the moment.

The easiest way around that is with either Cheat Engine or T-Search. Just find the RAM Address of where your money value is stored, do however many missions you want, then just set your money value to just over the next level requirement and then buy the cheapest thing you can find, then resell it and there you go, next level. No scripts or modding required.

Crossfire is the best looking Freelancer mod. Hard to believe that this game was released seven years ago.