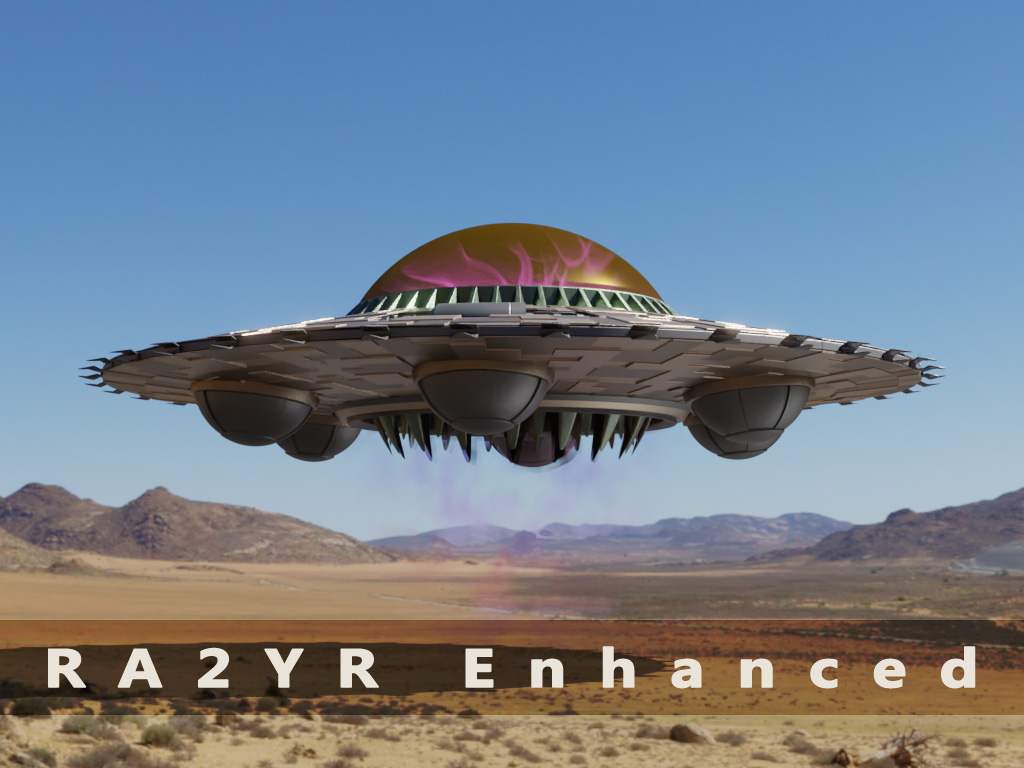 RA2YR Enhanced 8.0 is up with many new features. Now that most scripts have been cleaned up and stability is high, I was finally ready to move on fixing some of the game's artwork. Using Yvory, lots of units have been refurbished to look better. Here's some of the most important changes so far:

Any serious modder knows about the famous Hind helicopter. Originally, it was an abandoned game asset, but now it has been fixed and converted into the Allied Condor helicopter. Powerful but fragile, Condors are very useful for hit'n'run attacks. To keep the game balanced, they're expensive and require an Ore Processing plant to build.

Kirov zeppelins have been improved to have propellers. The original model looked like it had turbojets which wasn't a good match for this type of aircraft.

Having multirole IFVs made mass-selection difficult if players had some special IFVs meant for other purposes, so the alternative IFV model was introduced some time ago to solve this issue. But the model was awful and indistinguishable from the original model, and now it has been finally upgraded.

The French Grand Cannon Vehicle was also introduced some time ago to balance the French defenses, but it was a mere repainted MCV. Now it has been improved to have its own unique look too.

Another noteworthy update, the Soviet Siege Chopper has now received a more active support role and, while airborne, can fire bolts of energy (EMP) that disable for a short time enemy vehicles and buildings. It's now a direct rival to the Allied Condor, and requires an Industrial Plant to build.

There are lots of other enhancements, like Sea Scorpions having a mobile turret now, louder aircraft sounds etc. There are, of course, new AI scripts to handle all the new features as well.

You can download RA2YR Enhanced 8.0 from the link below.

Special thanks to the Ares and Phobos developers who are still working hard to improve the game and make mods like this possible.

One last thing, keep in mind I'm only posting articles on major releases, so if you like this mod you should follow it to stay in touch with the latest updates. Thanks for reading and have fun playing RA2YR Enhanced!

RA2YR Enhanced is a rebalancing mod for Red Alert 2 Yuri's Revenge with a completely rescripted AI. It aims to make skirmish games against the computer...

RA2YR Enhanced has a completely rescripted AI and makes all units and buildings in the game fun and useful, while holding on to the vanilla flavor as...

RA2YR Enhanced is a rebalancing mod for Red Alert 2 Yuri's Revenge with a completely rescripted AI. It aims to make skirmish games against the computer...

RA2YR Enhanced is an overhaul mod for Red Alert 2 Yuri's Revenge with a completely rescripted AI. It aims to make skirmish games against the computer...

The idea behind this mod is to make Red Alert 2: Yuri's Revenge a lot more fun and balanced, but without turning it into something else, like other mods...

Hi, first I'd like to thank you for still making mods for an old game like this, its well appreciated! I'm hoping you'll be able to help me out with my problem.

I had downloaded RA2 Yuri's revenge couple years ago from a website (I believe it was Repack-games.com or something along those lines). It was obvious it was a rudimentary hack but it got the job done so I was happy. Then recently, I came across this mod, and I rly wanted to play so it. So I thought why the heck not? Let's try to install it, and see what happens. As expected some errors came up when installing but to my suprise, it actually worked! I couldnt make too many condor or siege choppers or the game would crash but other than that it worked fine!

Since then however I was looking for a good version of RA2 Yuri's Revenge and today I found one! So I deleted the old version I had, installed the new one. Tried to install your mod but now a lot more errors came up and I can't even click the install button.

My question obviously is how to fix this? Is there a fix for this? Plz help because I did enjoy getting back in this fun lil game, but only because of the mod. The brutal vanilla AI just doesnt feel satisfying to fight against. Thx in advance for your time.

Thanks for the report! It seems to be a cultural issue.
Edit: this was fixed in RA2YR Enhanced 8.1
Let me know if you encounter any other issues.

Tried to install the 8.0 version of the mod it didn't probably finished successfully as it the button below the installation were not activated. Tried to uninstall it still stuck there says that i have to use the 8.0 installer (which I am). Tried on new folder still the same tried on a different drive the same. Any idea solution? Can't find something in the registry

Could be a security software issue. Ares and Phobos use "syringe.exe" to patch the game while running. Some antivirus software may check and intercept that file as being dangerous while the mod is installing.

Also, RA2YR Enhanced doesn't store settings into registry, check "C:\Users\$user$\AppData\Roaming\RA2YRE" for error logs. If you still can't fix it you can pm me with more details and screenshots, maybe we can work something out.

thank you i have yvory!

Hey, ¿is posible implement than some fixes will be optional?. For example, i want the music of the RA2 in YR, but don't than the SPY SATELITTE stay in the BUILDING TAB instead the DEFENSE BUILDINGS TAB.

You can edit custom.ini to customize the mod as you wish, for example to move SpySat to Defense tab you can write there

Hope this helps, have fun!

I Dl the new enhanced MOD. But when it comes to the screen to pick easy - hard & Launch Game, I get message "This version of YR only supports online play using CnCnet5"?

You installed it over a YR modded with CnCNet. RA2YR Enhanced is not compatible with CnCNet at the moment, so try installing it over a clean Yuri's Revenge 1.001. You can have multiple YR installed in different folders, this way you can play both on CnCNet as well as other mods. I hope this helps, have fun!