P.s. There are very few mods for this version of the engine, so I decided to add variety.

P.s.s. Recently, this mod also adapts to an alternative version of the engine (Open XRay).

Nameless Mod 0.4.5 (OXR):
1. Added radiation detector. This is the only way to find out how much radiation is in the main character.
2. Changed the economy. Changed some rewards.
3. Now on corpses and in hiding places it is possible to find various artifacts.
4. Added support for the pre-release version of the engine. Added support for an outdated version of the engine (2018).
5. Fixed a critical bug: the wrong frequency of audio files.
6. Fixed critical bug: bug in weather effects in OpenGL.
7. Fixed a critical bug: support for the German version of the game.
8. Bug fixed: mutant freezing during meat cutting.
9. Modification optimization for Linux (work in progress).

Nameless Mod 0.4 (OXR):
1. Added the ability to cut off parts of the body and meat from mutants.
2. Added variants of the prototype exoskeleton (the exoskeleton of the latest version has not been deleted, but it has become very rare).
3. Changed weather effects.
4. Simplified installation modification.
5. Added a lot of new textures. 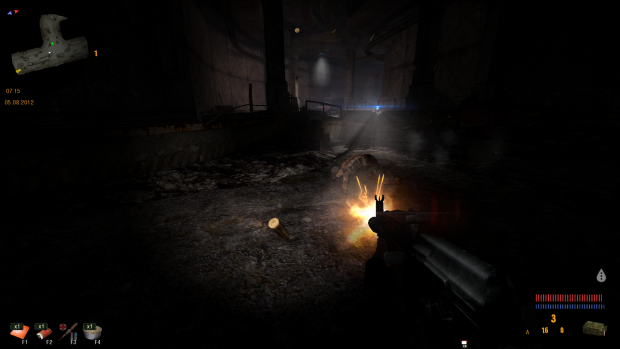 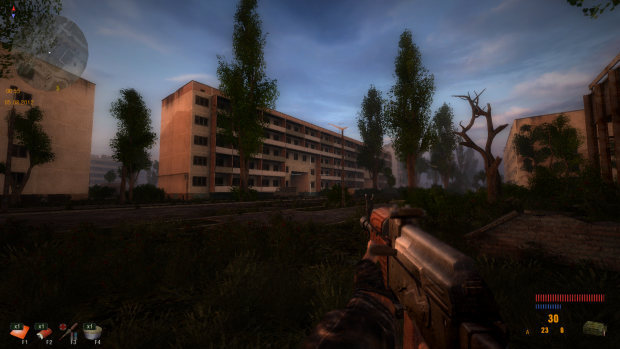 Nameless Mod 0.3 (Oxy and OXR):
1. New textures.
2. Sleeping bag.
3. Dynamic news.
4. People are now marked in the PDA (as the map approaches).
5. Now the attitude of stalkers depends on the actions of the main character (the monolith and the mercenaries are also neutral to the main character, but they can become hostile or friendly).
6. Now the player has different equipment at the start.
7. New effects (lens flare and contact lighting).
8. Fixed bugs with rats (spawn).
9. Fixed with freezing inventory.
10. The parameters of some artifacts are changed (some artifacts also increase the maximum weight. In return, the player can only carry 30 kg by default).
11. New Mutants (Ratking. Only test ver in dev mode).
12. All bulbs can be broken.
13. The modification is adapted for an alternative version of the engine (open xray).

Nameless Mod 0.3.1 (Oxy):
1. Corrects the absence of additional characteristics of artifacts.
2. Corrects the shutdown of the game when activating artifacts.
3. Slightly changes the size of the fire.

Nameless Mod 0.3.1 (OXR):
1. Corrects the shutdown of the game when activating artifacts.
2. Slightly changes the size of the fire.
3. Fix fatal error launcher.

*UPD 10.01: Nameless Mod 0.3.2 (Oxy and OXR):
1. Fixed a bug due to which it was impossible to complete some minor quests (subject items disappeared). It was a bug engine. Now these quests to complete the real, but the location of items changed.
2. Fixed bug with wrong interface.
3. Fixed bug with incorrect grass rendering (there was a bug in the engine. It was necessary to change the textures).
4. Fixed bug with incorrect display of wood, trees and metal textures.
5. Fixed bug of incorrect behavior of mutants, if the player is underground.
6. Fixed bug. Now you can throw tools out of inventory.
7. Fixed Bug: "! Missing ogg-comment, file: ...gamedata\sounds\detectors\da-2_beep1.ogg".

*UPD 18.01: Nameless Mod 0.3.3 (Oxy and OXR):
1. Full change of spawn (stalkers and mutants are now much smaller).
2. Fixed engine bug: crash with a large number of corpses in a location.
3. Reduced the likelihood of a bug engine: departure at the same time stalkers trying to open the door.
4. Optimization.
5. Some quest characters are made immortal, so that some quests do not break.
6. Fixed bug: binoculars did not work correctly.
7. Fixed bug: due to a bug in the engine, there was incorrect rendering of vegetation.

Small history of a small mod: new and old versions.

I hope this mod will be compatible with Call of Chernobyl in the near future. Looks promising :)

Yuck. Not every mod developer has to lock down their creative vision to one mess of a mod. At least this dev seems to want to make something new, something this community desperately needs. The issue with the western community is everything has to look and play like misery or coc, **** that.

I can’t promise it. For me it's just a little hobby. I'm busy now and doing a 2d game. But in December there will be a new version of the mod.

problem solved, the user.ltx was the problem, thanks for the suport Creator...
and i have a problen whit opengl, when i put the render in opengl and 1920x1080, the caracter are no visible, only white frames, i only can see the caracters in opengl with a lower resolution (this not happen with DX11)
An last question, why use opengl and not vulkan?

I passed your problems to the developers. Please delete the sounds folder in mod (gamedata/Sounds), new game restart (it does not need to be done if you do not encounter sound problems.). In the latest version of the engine there is a bug with playing custom sounds on some computers.

when a modification of the engine was being developed, Api Vulkan did not exist yet. Also, not all configurations support this API. Work in progress. it's made for Linux / Unix systems

look awesome, but i have a problem, i install the mod in a clear installation of the game (without mods or ads), in the order of the installation procedure:

but the game put the screen in low resolution and open a black windows and stuck, no message error, i have to restart sesion. in the log i have this:

I think that progress, i noticed user.ltx not are created for the game, i copy a user.ltx to appdata and now run, but crash selecting R1 to R4 and RGL in the user, tomorrow i post the log of the crash, can you post Your user.ltx file?

I can upload the game with the mod and the engine to the archive. Standalone version

Please :D that is a great solution

1. OK, I can upload my user.ltx file.
2. in the game settings there is a mode of working with OpenGL. This is the fifth render.

try deleting the “appdata“ folder. this folder contains configuration information. try opengl rendering. if that doesn't work, try the Dx11 render. And... I am not a programmer, I will pass information to the programmers of the engine. if there is an error in the modification, I will upload the fix today.

how i can set opengl?

i try this, and have the same error, the game stuck in a black window, no message error, same log...

i do reinstalling SOC, and try this

SOC? Shadow of Chernobyl? But this mod for Call of Pripyat... I can do standalone build

Does the engine (Open X Ray) work without this modification? (I am yu_schwarz)

Unfortunately, I do not find an error in this log, which may be a mod error. I will recheck the archive. if the error is in the engine, I will inform the authors of the engine about it. The engine is in beta. (I am yu_schwarz)

I’ll also upload a video with installation instructions today. maybe this will help.

thanks for the support ^_^