The Accursed Island of Lodoss is a land of enchantment and war. Its history dates back five hundred years, but empires have reigned and fallen many hundreds of years before, Only in recent decades have the warring states of Lodoss become united, at least by treaty. Yet Lodoss is still plagued by monsters, dark wizards, and evil priests. The lands and towns of Lodoss are as different and diverse as the colors of the rainbow.
Lodoss has nearly every type of climatic region imaginable. In the low lands are beautiful lush forests and valleys of gold and green. In central Lodoss is the Central Mountain range, which does pose a barrier to would be travelers between Alania and Valis. The mountain pass between Alania and Valis is long and hard, and though shorter than the southern route, passes through the Forest of No Return, few dare to venture through this dangerously enchanted realm of the elves and fairies. Mountains can also be found in Moss, Kanon and near Raiden. The tallest mountains are in northern Alania, where the land reaches an altitude of nearly ten thousand meters, and the climate turns bitter cold. Here, amidst the frozen caverns and mountaintops was the icy domain of the dragon Bramd. In the central northern region of Lodoss, in the country of Flaim, is the great Storm and Fire Desert, once an impossible land to navigate, now the desert is blessed with many frontier towns, forts and oasis—a welcome relief for those wishing to travel from Alania or Valis to distant Raiden. 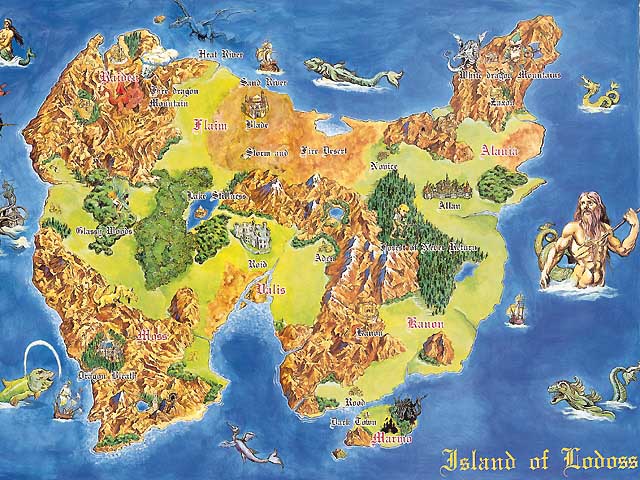 The first release of the mod will contain seven factions. Those factions are the Kingdom of Kannon, Kingdom of Flaim, Kingdom of Moss, Kingdom of Marmo, Free City of Raiden, Kingdom of Alania and the Holy Kingdom (also known as Valis). Another faction, however it is unplayable is the Grey Witch Karla who will take the place of the Papal States. Unlike many mods and vanilla Medieval II, there are few settlements that are not developed. Many settlements even have guilds so as to not stray away from the canon material.
For the moment the mod is quite limited in its capabilities considering each of the team members abilities. As such do not expect any new units until we can get skinners and modelers. Not only are we limited with units but we are not able to do many other things as well .
If however you (the reader) have any modding capabilities or are willing to learn an aspect of modding that would help the team, as well as a little or more knowledge on the topic please feel free to PM me. To learn more visit the mods website.
Post article Articles

perhaps even a arslan mod of the kingdom of pars and the kingdoms anime/manga could be also another idea?

are u da real paladin bob??

this would be really good..a big fan of this anime and manga :D

Nice to see intrest in the mod.

Once I get rid of all the errors, I will make a video that showcases all of the parts of the game that have been changed.

What is dead may never die .

32 members
You may also like
View All Top Mods