Legend of the Galactic Heroes - Sea of the Stars

Legend of the Galactic Heroes (LoGH) is based on the Japanese animation series bearing the same name. LoGH is all about the epic battles between gigantic fleets of the Galactic Empire and the Free Planets Alliance. This mod will feature different political factions of the empire or the alliance. We aim to recreate the space opera feeling and the fleet tactics employed in the series. Research and economics will be reduced to a minimum and the main focus will be on tactics and fleet movements like in the series.

First off: there are no new content updates planned. Why make this post at all, then? First, I updated the mod late last year, to run on the current Rebellion patch; due to how ModDB works this didn't count as an "update" and I want to let people that they can play this without reverting to a version from 2014. But also, I want to describe just why work on this mod stopped.

The main reason has to do with performance issues. There were two core elements that this mod developed around; first, big battles with tactical elements, where you took damage from being flanked. Second, logistics, where supply mattered. The second part ended up killing off the first, and finally the mod. Sins was never developed as this kind of game, and asking it to simulate it on this scale led to memory leaks that completely stopped new development as the mod went through a series of reworks to try to improve performance. Some of this was due to the original Sins engine, which had issues with this even unmodded, and the move to Rebellion alleviated some of this, but also created new problems. 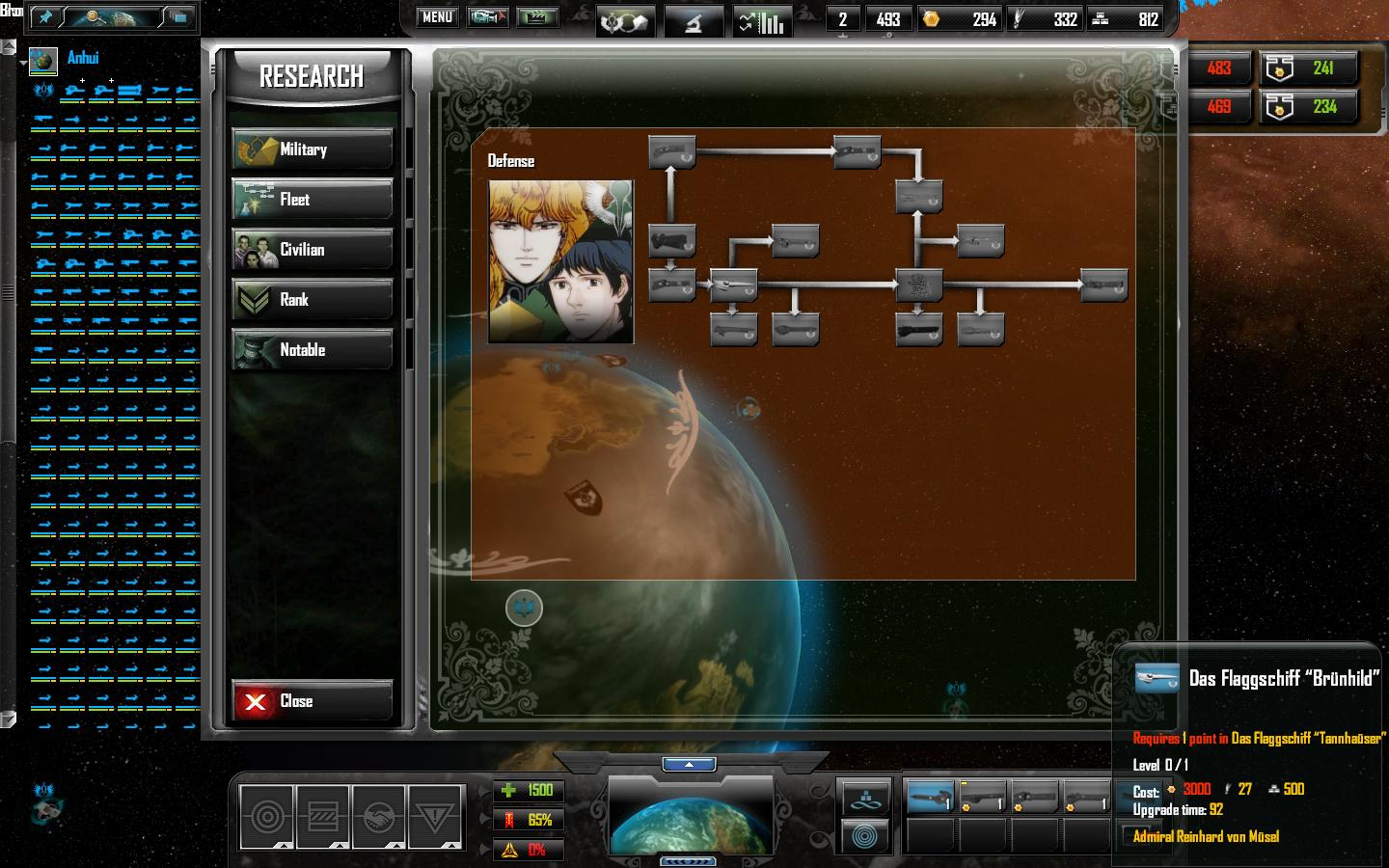 Take research. In the first version, this mod had a tech tree for each faction, where you could research new admirals and new flagships. Each one spawned once, using what was essentially a bug. When Rebellion was released, this bug was patched, and that also broke our research system, which is why the tech tree for this mod is empty.

There were other issues as well; the debugger for the game doesn't have an option to log to file, but stops the game every time to pop up an error message which may or may not make sense to someone who didn't program the game. The version of the model exporter I worked with didn't export textures correctly, which meant that models like Iserlohn had gigantic ugly seams on them (if you look closely at the Artemis models you can see this). Ironclad kept reworking the game file format every other patch in small ways that completely broke the mod.

Basically, this mod was making Sins do things it was never intended to, and trying to do it was exhausting.

When you look back, and forgetfully wonder what you were like in your work and your play

New company created for our mod 'Sea of the Stars'.

New version of the mod released today ! This overhaul should increase performance and avoid freezing during late game.

Full mod version for Sins of a Solar Empire: Rebellion versions 1.85 and later.

IMPORTANT NOTE FOR STELLAR PHENOMENA OWNERS: The Random Events option MUST be disabled when starting a new game. Current version of the mod, compatible...

No longer supported. Full 1.11 Beta Version for Entrenchment v.1.051. If you already got the 1.1 beta just download the Hotfix. If not download this full...

No longer supported. Updates Beta 1.1 to 1.11 for Entrenchment v.1.051. Changes 'broadside behavior' of some ships and includessome other small tweaks...

is it just me or the galactic empire is really buff

I found this mod but it works for a little bit then crashes not sure why any ideas? I will appreciate it!

It is sad, that there won't be any development. The anime stile is unique and interesting.

How to do the reseach? When i went to the research menu i found nothing.

There is none, exept for the supply.

This Mod is a gem of "Sins of a Solar empire: Rebellion" plz plz update it!!!!!!

What he said a second time. As Sins is 1.96 now, is it possible to recieve an update? I get it that this mod is from 2014, but mods from the anime verse in Sins are a rare sight and intrest toward something other than a Star Wars/Trek mod is high.

Although this is unfortunately true, I've updated the mod to the current Sins file format.

Nice, thank you, I've missed it. A question - do I have to turn off DLC content, because it kicks me out / crashes?

Thank you, I wanted to try this mod version for a long time. Can you tell me if there is a map based on the Legend of the Galactic Heroes universe, or just factions and ships???

Sea of the Stars Mod Group

Single & Multiplayer
Tags
Embed Buttons
Link to Legend of the Galactic Heroes - Sea of the Stars by selecting a button and using the embed code provided more...

The Expanse: Shattered Accords Sins of a Solar Empire: Rebellion