This article is the follow-up to the one I posted a few weeks ago, and is replete with a great deal of info about things I mentioned previously. The first topic is the structures that I added to GC mode. These structures will become vital as you expand your forces. Each one offers an enticing advantage, but often at a hefty price. 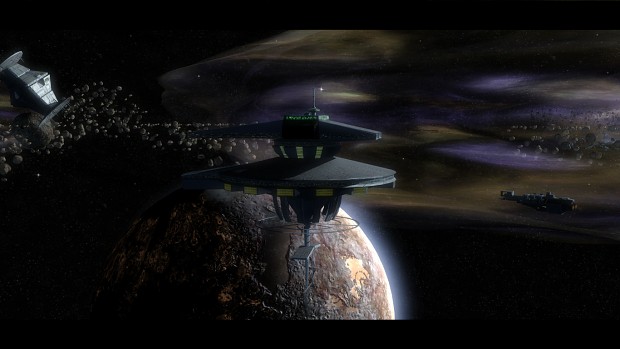 Although already a feature in the mod, the trade-port is receiving a new model and reduction in armament. Because it is a civilian structure, it only has 1 quad turbolaser battery. Like in the past it allows access to many merchant vessels, including the YT-1300, YT-2400, YZ-2500, Action IX Transport, and Gladius Light Freighter. This trade port can be built at most worlds that have sizable populations and trade connections, and it generates a slight income from taxes collected on all trade.
(Credits: UEAW team) 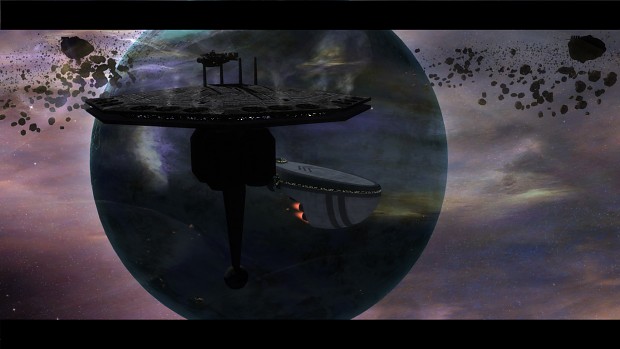 The gas extractor is self-explanatory. These structures extract and refine gas into finished products to be used as fuel in everything from weapons and thrusters, to reactors and hyperdrives. These facilities are very vulnerable but have light shielding, and must be well protected due to the highly volatile nature of the gasses. They provide a substantial amount of income, and also a slight population boost because of its additional fleet support capabilities. These structures can only be built in the atmosphere of a gas giant or in the middle of a nebula. Once built, you will be provided with access to the Hex-type Gas Transport and the AG5 Bulk Gas Transport. Although they are very expensive to build they are a worthy investment.
(Credits: UEAW team, Petroyglyph) 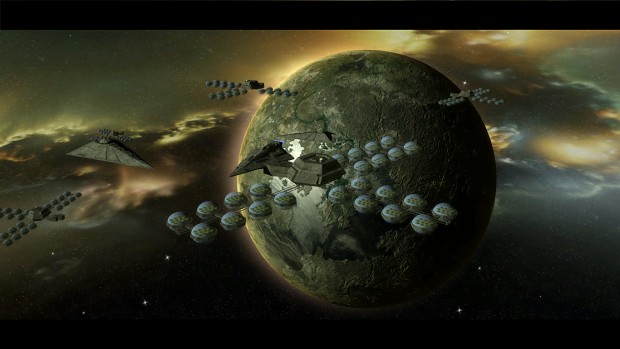 Going in a different direction, this structure's purpose is not economic, but rather it a support network for local forces. These structures are most commonly found in orbit of agriworlds, planets that are entirely dedicated to agricultural development. They contain pods where various plants are grown to be consumed by military forces. As such, these structures provide a considerable boost in your galactic population cap by having food directly sent to local orbiting forces. These structures have no shields or weapons, so they require much protection. They can be constructed above worlds with high agricultural significance only.
(Credits: UEAW team, Petroglyph) 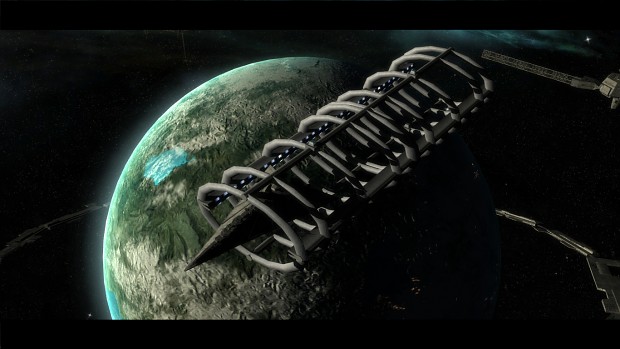 For a hefty price, this structure provides a boost to your starship production above worlds that already have major shipyards. In the midst of combat they also provide some repairs to friendly forces. These shipyards slightly reduce the build time for all corvettes, frigates, and capital ships at the location. They are moderately shielded but should still be protected, as they have no weapons. Additionally, a moderate population boost is provided because of its ability to help sustain fleets.
(Credits: UEAW team)

Next up are some new units I hinted at, namely carriers. Both the Alliance and Empire have one each (note that the Alliance already has the Emancipator Heavy Carrier in addition to the new one). 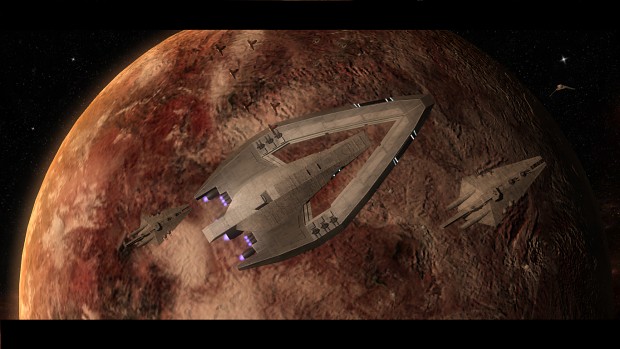 The Conquest-class is the main carrier for the Krayt Empire, in a combined effort by Kuat Drive Yards and Sienar Fleet Systems. It is a mid-sized capital ship, measuring 1,200 meters, between the size of an Ardent Frigate and a Pellaeon Star Destroyer. The carrier is modestly armed with multiple heavy turbolasers and medium torpedo launchers, and a handful of point-defense cannons to ward off fighters. It should be noted that while capable of holding its ground against corvettes and a couple frigates, it is not designed to go head-to-head with a warship such as the Scythe Battlecruiser, or an armada of frigates. Despite this, its shields are considerably powerful, with average armor and sub-light speed. The Conquest-class comes equipped with a class 0.85 hyperdrive; combined with its impressive 24 squadron-capacity, the Conquest makes for a vessel capable of commanding an invasion fleet-just make sure you guard it carefully.
(Credits: EmperorNiko, model and texture; Adamkop, concept) 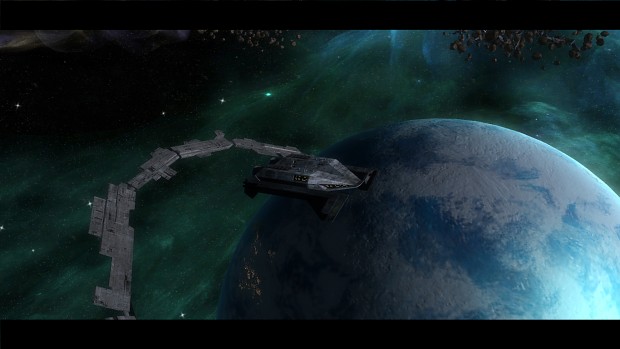 The Watchman is the GA Remnant's answer to the ever-increasing need to provide a mobile base for its fighter-depended fleets, designed by defectors from numerous galactic manufactures . At 500 meters long, it is slightly larger than a ShaShore Frigate. It comes equipped with a class 0.75 hyperdrive, matching the FTL capability of a Scythe Battlecruiser. Despite this, it is considerably slow in sub-light speeds, due mostly to its heavy armor. The multiple heavy lasers can accurately target fighters but are powerful enough to defend against other similarly sized vessels when supplemented by its turbolaser and missile batteries. The larger hangars and hyperdrive system have lead to reduced reactor size, and as such the ship's shields are not very robust. The Watchman comes in two variants: Type I offers the standard fighters, while Type II holds the more advanced (and more expensive) ones. Each kind has different advantages, and while relatively robust, should be escorted into battle as part of an armada.
(Credits: Warb_null)

That concludes all the new content for this update. By the middle of December I will post again, with information regarding the remaining structures for Galactic Conquest, as well as the aforementioned repair ships. I will also try to get a video of gameplay if I have time, because videos are more fun than pictures. So, that's basically it for now. And remember what I said last time, don't ask for a release date. Just don't.

The information in this article lays the groundwork for my goal of an more complex, system that intertwines your economy, population and military, as...

(Not) Making the Cut

It's time to say bye-bye to some of your favorite, iconic units and make way for the future.

Change is coming, and change is good. Just don't get too upset if you don't like it.

What's Been Going On

If you've been wondering where I've been, you'll find out.

This pack contains four (4) turbolaser projectiles/particles: red, green, orange, and blue. Each one has a muzzle flash attached to it. Note: This is...

The time has come for version 1 of Legacy Era: Second Imperial Civil War to be released!

This is a patch for the Legacy Era Mod. This will bring it up to the latest version.

This was one of my personal favorite mods, as I love the Legacy Era. Is this mod still playable?

It’s sad this mod is dead 😔. Mod bring nostalgic memories My first mod I was able add game and learn how the xml works add clone wars ships into the legacy era for the fun. like very modern ship vs very outdated ships. 🙃

Somebody smarter than me should upload this to the steam workshop.

I sincerely wish it wasn't but it is... sigh.

Does anyone know a way to run this mod if I have the game downloaded through Steam?

Great Mod a smooth design by Cheesecake645. Its fun to kill time and have fun and what not. The design and the layout are very good and the models and textures for ships are great. The Skirmish is really fun also the Galactic Conquest is fun as well. The Graphics and effects are awesome.