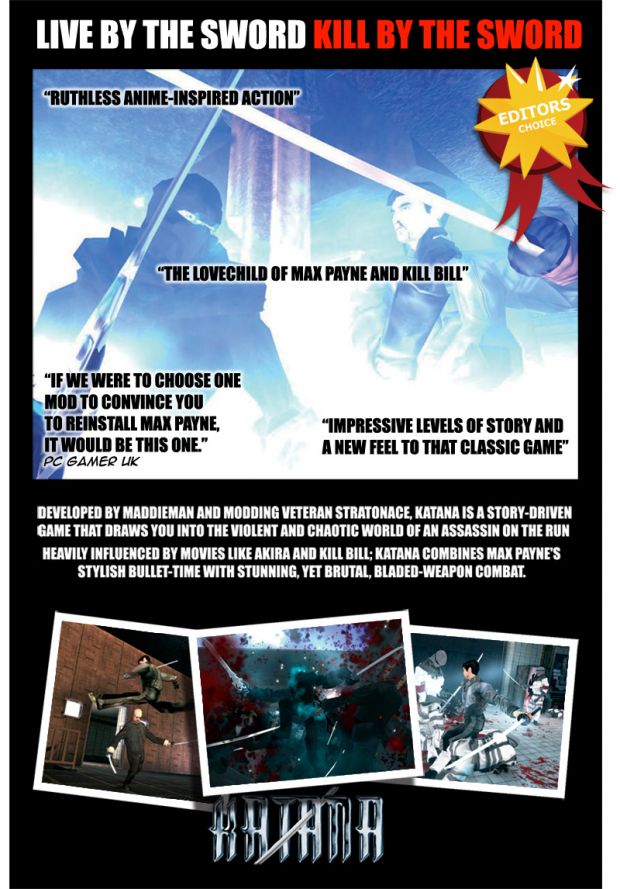 Max Payne 3 has just blown into town like an old lover so why not reminisce about the old days by replaying the original two games.... Modified!

The Real World
It wouldn't be a Max Payne 1 mod if we didn't have some high flying kungfu and bullet dodging now would it? The most recent of all the MP mods to be released, however it is only a demo. Lets see where they go with this!

Katana
It seems you got anime in my angsty. Katana draws you into the violent and chaotic world of an Assassin on the run: - from his Order; from the shattered remains of his past; and from the haunting screams of the countless people he's murdered.

Max Payne@University
This mod was acutally modeled after a real university and a story played around it! It makes use of a few other mods like Kung Fu 3 Deluxe Engine (by Kenneth Yeung, MrUniq) and the Enemy Kung Fu (by Ghasp) engine to round (house kick) out the mod.

The Family
The Family is a truly unique modding experience, as it follows the story of the young gangster Tony in an entire black and white film noir-ish world of the 1930's mafia era.

Payne Effects 3
It wouldn't be a modding guide without one overhaul mod, and this one is really good. With new spectacular unique effects and with lot of key features that will drammatically change the original gameplay. Everything is created to improve the original feel of the game without loosing the Max Payne signature.

7th Serpent: Crossfire and 7th Serpent: Genesis
Thrusting players into a world of corruption, secrecy and vengeance. Two different chapters within the same universe. Made by ModDB's ye'old editor Stenchy and his team, so you know it is good!

Mona: The Assassin
Mona Sax is a contract-killer, a job at which she excels. When a Mafia boss sends his army of mobsters after her, assaulting her hideout and forcing her to flee through the city streets, it gets personal and real nasty. Play through a fan story of Mona Sax!

You can find many more gems right here on ModDB! Max Payne's new story can wait a little longer can't it?

I'd just like to to quickly say thanks for everyone who voted for us at the 2006 mod of the year contest. We didn't qualify, but we *did* get...

DOWNLOAD Now that Katana is finally out, here is a list of all of the major download mirrors. FileFront Gamers Hell FilePlanet File Shack Max Payne Zone...

The hugely anticipated Katana modification for Max Payne 1 has been released. You may have heard about this mod from recent issues of PC Gamer (both UK...

Sorry about the delay folks, Katana is nearly done -- just a few animations and last minute checks and I think we're there. We're looking at a week, maybe...

If we were to choose one mod to convince you to reinstall Max it would be this one. - PC GAMER UK Developed by modding veterans Maddieman and StratonAce...

how do you turn off health regen in this mod?

hey i cant get the sound to work at all, its just crackling and skipping, or just no playing at all.. does anyone know how to fix this. im on windows 8.1

there is an audio fix for this. just google it

Still again, the best mod I ever played. Some other mods pushed hard for this title, but nah... It still smells nostalgia. Thanks for that creator!

great mod but... like the regular kung fu mod melee controls are ****** up i mean why you have to stand there waiting to get brutally murdered by 5 guys while you're desperatly trying to do one of the 4 combos i mean coulnd't be 2 separeted buttons for running kicks and normal katana combos? also why the 1st hit of every combo MUST effectly hit to trigger the full combo half the time i died miserably because i stop trying to do a combo thinking that i've hitted the enemy and that the combo it's triggerd while it's not

what is the music from main menu?

thanks man but that is not the music what i want. I want the music of the fight with marco (or the final boss) Can you say me (if you know) what is that music?
Thanks for help.