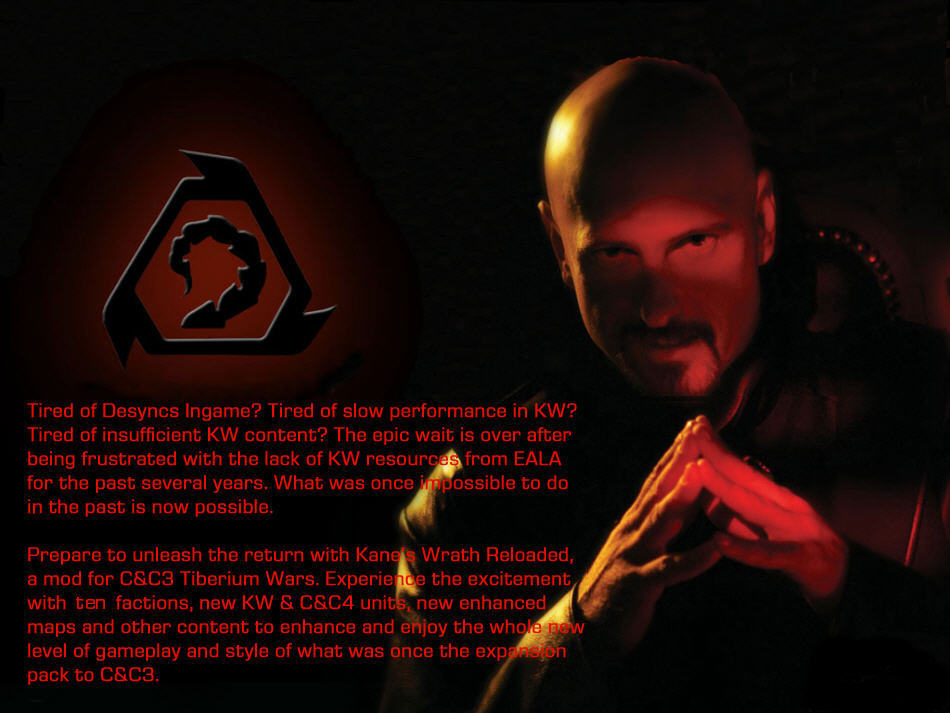 For my new expansion mod: Moddb.com

Also please do not ask in the comments section whether the sub-faction AI to work in-game will be inputted because I won't answer it again. Ever since I asked CNCLabs team about it, one of the developers told me that only one faction can do it and that's the neutral faction (ie. The Forgotten). So out of 7 sub-factions from my mod as custom factions, I can only apply to one of them as an AI by re-using a neutral faction and cannot apply that to other multiple factions which I think it may be a restriction to C&C3 modding. I haven't tried applying the skirmish AI coding formula from Zero Hour to C&C3, but so far I haven't tried successfully to get a neutral faction AI working in-game as a custom faction since then.

It's been about a decade since Bibber released the C&C Asset Extractor tool and me getting the KW Mod SDK that changed C&C3 modding forever. From C&C3 Reloaded to this C&C3 Tacitus Revolution, this mod has reached many feats than most C&C mods. With the 13th faction as GDI Russia nearly complete as well as all other factions finalized with their units and structures, hopefully the 14th faction as The Forgotten will become the final but most difficult of all factions. The end of modding this mod is near. As I said before, I may not have the proper time to do mission maps as well as skirmish maps, unless if someone pulls a "Cities Skylines" gargantuan effort there with all the proper civilian assets, then detailed maps will be the real thing of the future in C&C3. Some mappers recently have done many mission maps specifically for Carnius' Tiberium Essence mod.

I don't know what brought me back into modding this long-time mod. I may have removed my Twitter feed here but I am still there. Cities Skylines and Synthwave music pretty much changed everything how I look into C&C, the future of RTS gaming and open-world games. Thanks to a new custom PC I had built, I was able to come back and start over from v0.52. This is probably the biggest release since v0.5, four versions were done in the midst of a few weeks. Most bugs have been fixed except for the more common issues. It took me an average of 7-10 minutes compiling a huge mod instead of 20-30 minutes thanks to a faster SSD and a Intel Core i3-9100f.

YOU MUST READ ALL INSTRUCTIONS BEFORE PLAYING THIS MOD!

Notes when playing this mod:
1) If you are still getting an “out-of-memory” message error regardless if you used the 4GB RAM tool or not, you have to set your texture quality setting to medium and the anti-aliasing off to reduce RAM usage. Also patch cnc3game.dat (not CNC3.exe) to use 4 GB, only if you have 4+ GB of RAM. To get the 4GB tool, grab it here from Egozi44: Moddb.com
2) If you are getting the UI screen ingame stretching out on other monitors/TVs not on 16:9 ratio, then I suggest you need to disable the TacitusAptUI_0.4.big line in the skudef file of the mod. If you are on a 16:9 ratio HD monitor, you need to run at HD compatible resolutions in order to see all of the UI ingame. There's nothing I could do to fix it, unless I reverse the command UI ingame back to its original state like in C&C3.
3) To run KW maps with KW textures, this ArtKW.big file comes with those KW textures. Just place it in "Core\1.0" folder of your C&C3 directory and re-edit and rewrite the config.ini with the line "add-big ArtKW.big" without the quotes.
4) For unlocking all Intel Database entries and changed hotkeys ingame, an RAR file was included. You put them in "your user name" profile in C&C3 where this path lies within: C:\Users\your user name\AppData\Roaming\Command & Conquer 3 Tiberium Wars\profiles. Same goes with hotkeys.ini file if you want to run C&C3 using the modified key bindings.
5) For civilian assets, you can put WBData_1.1.big in "Core\1.0" folder of your C&C3 directory and re-edit and rewrite the config.ini with the line "add-big WBData_1.1.big" without the quotes. I wouldn't recommend running this mod with WBData_1.1.big in the skudef because C&C3 recognizes as another mod itself and not a combination of the two-in-one.
6) To run the mod with the Eurostyle UAW font shown correctly, you have to extract and install that Eurostyle UAW font that’s inside the TacitusA_0.56_Misc.big file (as an example).
7) To change the C&C3 TA launcher splash files, extract/replace them in the Launchers folder of your C&C3 directory.
8) Still as of now, only GDI/NOD/Scrin factions have skirmish AI. The Forgotten faction will become the fourth faction to have skirmish AI.

Anyone is welcome to finish on what I have started and it's better off with a new team doing this huge project that I could not handle on my own. I decided not to do a tutorial how to run mods on C&C3 and KW because I am losing interest in C&C lately. But since Bibber has retired from the C&C Community altogether, it'll be more difficult to get the C&C Ultimate Edition launcher fixes in order to run mods for C&C games that use them.

So here the changes of C&C3 TR Beta v0.56 through 0.58 (all changes in older versions are in the readme file):

============================================
Beta version 0.56 changes
============================================
• Added Scrin Archon, a tier-4 infantry unit available for all Scrin factions, temporarily using Shock Trooper Plasma Disks upgraded weapon, and also a Scrin Shrike which is a suicide unit, however its attack doesn't work at this time. (credits to Stygs for the units)
• Steel Talons Gauss Titan has been replaced from the one from C&C4 and still retains the weapon from the old Gauss Titan.
• GDI Zone Lancer can now fire with strong gauss rifles instead (used a weapon from the old Gauss Titan). However, the tracer of firing the weapon is still missing.
• The original civilian assets from Kane's Wrath have been re-integrated into the mod, rather than the worldbuilder version.
• Most sub-factions' remaining issues have been fixed including a work-around edit of the mod.str defines and sound effects.
• More experience veterancy levels are added to all other new structures and units.
• The following additional assets are cancelled for this mod:
-- All Crawlers including offensive/defensive/support. Very difficult to pack as mobile war factories and then unpack, unless someone has done all of those three in C&C3 and released the toughest source code in that way.
-- The Orca Harbinger was attempted to be put into the mod but some special codes from RA3 prevent it to work in C&C3. Someone may have done it but in a different way.
-- The Shogun Executioner to have its ultimate shockwave ability.... I believe someone has done it in C&C3 but I don't know who did it and it's a tough ability to work on.
-- Giga Fortress was considered but like the Harbinger, the special codes from RA3 prevent it work in C&C3.
-- Yuriko Omega was considered but even a psyonic or mind attack doesn't work in that old engine.

Update on this mod and now in hiatus

Currently the state of this mod right now is on a hiatus (it's not cancelled yet), but new ideas are still on the horizon.

Prepare for the "mental omega" of C&C3, because the unofficial second expansion pack to C&C3 is finally here.

Welcome to the first ever update of this expansion mod

This is the first news update on the newly mod page.

Well this wasn't supposed to happen until things had gotten out of hand, delaying the mod's release.

One of the biggest C&C mods of all time is here once again for the final time.

The mod's back with a new update since Christmas 2017 and my C&C series modding career is nearing the end.

One of the biggest C&C mods of all time is here once again probably for the final time after several years.

This C&C4 Art & Sound Pack contains most of the C&C4 units and structures and it excludes most civilian, neutral and other assets. Shaders...

I haven't updated this page in eight months and the overall mod since about five years ago. Now I am still wondering if I can only fix the bugs and balance changes only for this mod (and not Tacitus Revolution) and put the new synthwave music in that I am working on.

hi!as a cnc3 player,can I ask where can I download a mod which combine sub factions into one?Because I prefer use a faction which contains all sub factions best units

Hello! Thank you for a such great mod! Could you upload separated version for only GDI mod with their units without NOD and Skrinns, and only for NOD without GDI and Skrins?) I'd love to play campaign in that way, always dreamed to do it with those units from Kane's wrath :) and the best would be adding all factions in one GDI, to make all units playable in campaign. I hope it's not difficult, thank you very much anyway!

Nothing new to report today. Just trying to bump bringing back more people to view and play.

I'm not sure if it's caused by some of the maps or not, but in the map packs that I've downloaded from here, the Skirmish AI doesn't start building or anything. Is this a common bug?

That only happens when you play against a faction other than GDI, NOD, and Scrin.