Now max payne is getting bobzied. All the things you loved about the other are here. Including funny skins,sounds and more. Remeber these mods are just made to give you a laugh. Enjoy!

Behind the Mod: Michael Henke

Hammy is of an ancient time, modder Josh 'Jambozal' Marriott once said. "He is a monster that emerged from the depths to haunt us with hilarity and burn us with searingly awesome puns. His existence cannot be questioned, for the meaning of Hammy-Bob eludes mortal men." 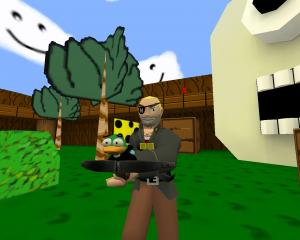 Could this be Hammy-Bob, wielding an attack duck?

When asked about the infamous creator of the Hammy-Bob mod, people from the community have many differing answers.

"He's that guy that does that thing," modder David 'Chunky' Schwartz said. "Don't tell him I said that, though."

But what is the truth? Where did this individual come from, the one who describes his very own project as "a giant zucchini with wheels?"

"The name 'Hammy-Bob' came from divine intervention," Hammy-Bob mod creator and self-proclaimed lover of cake Michael Henke said. "I saw it in a dream. There was a guy named Bob sitting in this chair. He was eating a ham and I thought, 'hey, he looks hammy.'"

Hammy-Bob mod, a cult classic among modders, was a reaction against games like Counter-Strike and all of the mods that seemed to emulate it. Instead of focusing on realism or a gripping narrative, Hammy-Bob mod was an explosion of creativity and inspired wackiness. 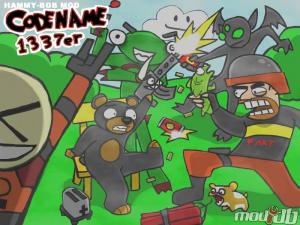 Hammy-Bob mod summed up in one image.

"I just wanted to make something that I would love to see," Henke said. "It is pure randomness and craziness that you can't find anywhere else. It doesn't have to be the most beautiful mod ever, that's not the point, it just has to be random and crazy and fast-paced. I love being able to create whatever I want and not having to stick to any set standards."

These dreams of wackiness did not start overnight, however. Henke started small, joining several mods as a mapper and trying to gain some hands-on experience.

"All of the mods I worked on at first fizzled off into non-existence, never to be seen again," Henke said. "I started in a World War 2 mod that would have gone far, but died quite quickly. Then I was working on one called Fire that was all about firefighters. It died too. You do what you have to do to get started in the modding business. I probably ended up in a dispute with every mod creator I worked for. It was crazy."

The creator of the Fire mod got into an argument with Henke and told him that his maps were terrible and that he had no talent as a modder. Determined to prove himself, Henke left for several days to create what would become known as Hammy-Bob's Killathon, the first iteration of the Hammy-Bob mod.

"Killathon was just Half-Life, but retextured with new sounds," Henke said. "There was nothing fancy about it, but when I showed that guy, it blew his mind. He never doubted me after that. Then his mod died and mine lived on forever! He probably fell off a cliff or something, because I never heard of him again." 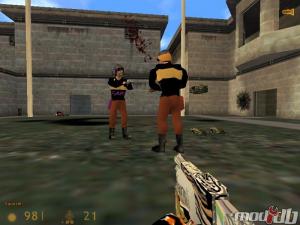 Killathon in all its glory.

Riding high on this relative success, Henke began posting Hammy-Bob's Killathon on various websites, looking for critical feedback. Unfortunately, he found it in a number of places where fellow modders and gamers told him repeatedly that he had no talent whatsoever and that he was wasting everyone's time.

For new people, I recommend believing in yourself and sticking up for what you love, Henke advised. As a beginner others will be incredibly critical of your work. "They are mean and they will chew you up, spit you out, and try to take your soul from you”. Pretty much any Half-Life site is mean and will show no mercy. I think the Half-Life community gets nervous about things that try to change too much. They like to stick with their normal little set of mods.

"Sadly, I think the negativity is common amongst modders. It's not good! You need to cheer on the new people coming in and doing something wild. Modders don't do that much. People think Mod DB is overly harsh on the new guys, but they are a lot nicer than many of the other sites I've been to. They actually give you constructive criticism, if you accept it and don't get pissed off right away."

Emotionally battered, Henke was preparing to give up and abandon the mod. Nobody was giving it a second glance, until he posted it on Mod DB.

"Once I signed up on Mod DB, more people started to join the team," Henke said. "We kept changing more and more of the mod and making it better until it became crazy and started to scare people."

With this, the first version of Hammy-Bob mod was officially born, shedding the single player conversion that was Killathon in favor of an unbridled, insane version of classic deathmatch. 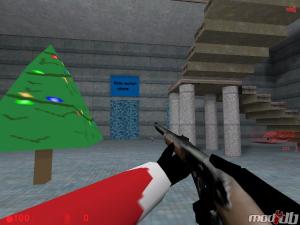 "Hammy, to me, embodies what modding is all about," Mod DB site owner Scott 'INtense!' Reismanis said. "He does it because he absolutely loves it and his wacky creations are nothing short of, well, crazy!"

The classic Hammy-Bob mod would later be followed by several Christmas editions, where players are encouraged to "put the fish down and pick up a candy cane."

"We still get people occasionally who come onto the Mod DB profile and flame us," Henke said. "I really like it now. We have fun with them. People ask if the mod was created by an eight-year-old and I tell them that it was. It's fun."

"Hammy is great to work with," former Hammy-Bob mod team member Shaun 'Stuffie' Hutchinson said. "He is fun, carefree and has a crazy vision. Plus, he isn't a bully like a lod of mod leaders. He prefers people to do stuff randomly and on their own, rather than him telling you what to do."

Not content to remain on the Half-Life engine, Henke has big plans in store for the future. 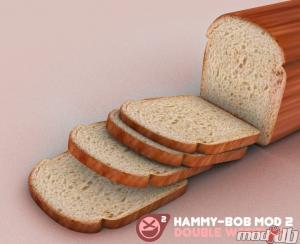 "Well, just between you and me and every single person who reads this article, Hammy-Bob Mod 2 is currently in the works," Henke said. "This time, we are going to be organized, which will hopefully keep it crazy and random while being enjoyable for everyone. It will be the most stupendous and wonderful thing anyone has ever seen."

Despite the insane persona, Henke wants everyone to know he isn't really crazy.

"I do what any other human does," Henke said. "I eat, sleep, procreate and kill. Well, aside from the killing. I like to go out in public and meet scary people. People frighten me sometimes, which is all inspiration for the wonderful modding that I do. You have to open your mind to new things, you gotta just dive right in and try, then hope for the best.

"I think we as modders are both changing the gaming world to make it a better place, but sometimes we hold it back, too. Developers think they can leave out crap in their games, because they know the modders will make up for it. That isn't right. Sometimes modders get caught up in doing the same thing over and over again, but there are some crazy people who are making [the mod industry] a better place for all."

Looks like its time to ham it up, Max Payne style. You will laugh.

Link to the site (with downloads :D)

DAWN OF THE DEAD Max Payne