A Gamemode by GossamerSolid for ArmA 2 Combined Operations.
Based off of Warfare BE

Gossamer's warfare is a variant of Warfare BE (Built from Version 2.030, then custom built since). It has been in development for almost a year now (was developed under another name previously). People might just ask, why would I want to play Gossamer's Warfare when Warfare BE is out. Well, it all depends on your tastes. Warfare BE has some very good features, but Gossamer's Warfare has good features of its own. I'll leave it up to the player to chose which one they want to play.

Big Thanks to
- All of the Testers
- Mando for Mandoble Missile Mod
- TheGameWardens.net community
- The TV2 Community
- BIS for ArmA II
- Benny for Warfare BE
- CptDavo for Flare Sounds 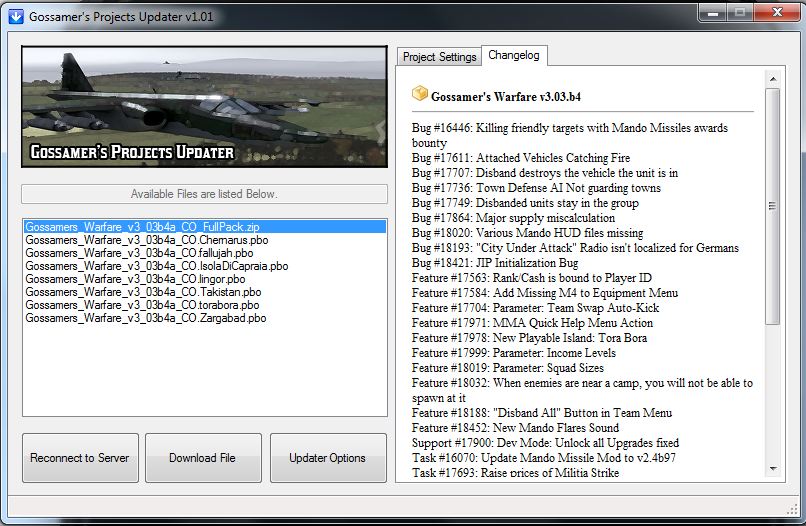 Q: I cannot figure out how to build an air factory, it is greyed out in the construction menu
A: You must own a certain amount of towns first (Chernarus & Takistan - 8, Zargabad - 4, Lingor - 6).

Q: When do AI Teams Spawn? I don't see them anywhere!
A: Gossamer's Warfare does not have AI Team Leaders.

Q: Where is the AI Commander?
A: Players have to be the commander, there is no AI commander, nor are there plans for it.

Q: What is the base limit?
A: We don't believe in base limits, you are able to build your buildings wherever you want.

Q: I still had buildings, but I lost... What gives?
A: The only structures that matter to victory are Light Factory, Heavy Factory, Air Factory and HQ.

Q: Mando is too hard... Can you make a version with vanilla targeting?
A: No, the mission is balanced specifically for Mando usage. Removing Mando would cause issues.

Q: Why can't the AI use the Rapier or TOR-M1 System?
A: They aren't scripted to do it, plus they are very strong systems so there'd be balancing issues with AI controlling them

Q: Why am I getting kicked for missing "CAWheeled2_LAV25"/"CAWheeled2_BTR90"/etc
A: The mission relies on ARMA 2 AND OPERATION ARROWHEAD content (Combined Operations). If you are having issues getting your two games to actually combine to make Combined Operations, please head over to the troubleshooting section of the BIS Forums.

Thanks for voting and helping Gossamer's Warfare on it's quest to become the 2021 Mod of the Year. You are now in with a chance to score some free games from our #modlove collection. Help this mod secure more votes by embedding the widget (or link) we have included below on your favorite sites.

ArmA 2 is the third game in Bohemia Interactive's civilian military simulator "games". The original, Operation Flashpoint: Cold War Crisis, was built off of the Real Virtuality 1 Engine. The Real Virtuality engine series was never originally meant to be used for massive online matches, it's primary purpose was to allow armies from around the world to train in a very realisitic simulator through means of a LAN connection.

Well now we are at Real Virtuality 3 (with improvements on the way from the standalone expansion pack for ArmA 2, Operation Arrowhead coming June 29th, 2010), and the engine has improved quite a bit.

Here is an image to show the engine differences:

Aside from graphics, many changes have been made to multiplayer as well. Back in the days of OFP, we didn't have the ability to join matches part way through the game. Since RV2 (ArmA, VBS2, OFP: Elite), we've recieved a new system called "JIP" (Join In Progress). This has been a godsend, but has also caused problems. Scripting a JIP compatible gamemode/mission is a lot different from the original way of doing it because of the fact that we have to account for players leaving and possibly reconnecting.

Anyways, that was a bit of background on ArmA 2 and a bit on the engine itself... back to the main discussion: Quality vs Quantity. Gossamer's Warfare is a CTI gamemode (Capture the Island), meaning that the whole map is the battlefield for players. There can be up to 1000+ AI on the battlefield at any which time, which can lead to amazingly fun battles with explosions and death everywhere, but that can also lead to problems.

It has been proven that any amount of AI eat up a sizeable amount of resources on both the Client and the Server (all depending on who the AI are local to. Resistance soldiers in warfare are local to the server, player's squads are local to x client). Since Gossamer's Warfare is a continuation of AWP Warfare (defunct), I've seen what happens when you include too many towns for capture and AI on the battlefield. We actually had so many AI and battles going on that the server box took a dump and restarted itself :). Then we tried a really low amount and it removed the epicness from Warfare right out of Warfare!

I believe that I have now reached a fine point that Gossamer's Warfare is running fairly well and can still provide epic battles.

So here's a question to those that read this article: Would you prefer a completely Lag free experience with smaller battles? Or would you prefer a version of warfare with a certain amount of lag that could be noticed, but the battles are large and beefy. I personally prefer the second option, but I'd like to hear your thoughts.

This tool allows you to download the latest betas or release versions of any of Gossamer's Projects. NOTE: The tool requires administrative permissions...

Sorry for the confusion :)

I've been very busy now that I'm working this summer full time. I'll answer your questions here and hopefully get a guide rolling sometime this summer.

The Upgrades will all have descriptions of what they do in the upcoming version. If you wish to know what a few of the upgrades do specifically, just reply with the names and I'll tell you.

As for Minimum towns for air:

So for example, Takistan needs 8 towns to be owned by air factories are unlocked, while Tora Bora only needs 3.

Hey, just wondering if anyone could point me in the direction of a guide or tutorial. For one I have no idea what many upgrades do on either side (for example, logistics). I also don't get many assorted facts like how many cities are required to build an aircraft factory.

There's a small FAQ, just ask a question if it's not already there.

How to use this mod? I meant for LAN

It's meant for use on a dedicated server.

Look up on how to configure a dedicated server for ArmA 2, then run that on your PC and connect to it.

Or you can come play on the official server sometime

sorry for the lack of updates here, I've been updating elsewhere.

Version 2.03 will be released this weekend (It has Operation Arrowhead + ArmA 2 Support)

What specs do you recommend for a dedicated server?

We run 5 servers on it including arma 2 and we get 0 lag still. So you might be able to see from that.

What's your budget for renting?