The Frontier is a DLC(But bigger) sized mod that aims to bring a unique experience to Fallout: New Vegas. The Frontier takes place in the frosty areas of Portland Oregon, where the NCR and Legion fight over the frozen city. 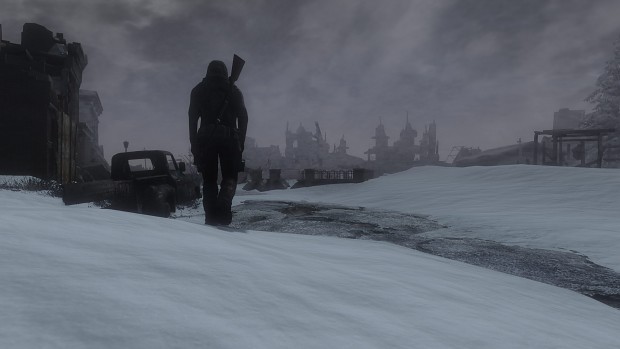 In theory is it possible to use the frontier vechicle code to make power armor or aircraft? It had so much potentials.

Here is the original frontier mod

Works a lot better than the current release version, and has a bunch of voiced npcs, barely any of the npcs are voiced in the current version.

Where was it ever implied that the team disliked the game they're modding?

I mean they said that they felt like new vegas never held up to fallout 3. If they did like it. they had a funny way of showing it

DONT EVEN SAY YOUR MOD IS HALFWAY ON THE WAY TO BEING SOMEHWAT NEAR THE PATH TO KIND OF PLAYABLE IF YOU LITERALLY DISREGARD THE WORDS OF EASY PETE IN THE FIRST 5 ******* MINUTES OF GAMEPLAY, YOU NON CANONICALLY BIGHORNER RIDING *** BUMASS ******* LOSERS

I find all this hate and outrage about this mod rather sad. First off it is a mod and nobody forces you to like or hate it. Many individuals worked on this over years for free and that even while they already had problems to begin with such as strong depression. A thing barely anyone understands since they dont know how that is but there are the first when something goes bad to jump onto the hate bandwagon. Happens a lot more in the last year. Not sure if you guys are sad and depressed of corona but no reason to leave your stink in the internet. And dont talk to me about how its your right to express yourself or leave a "opinion". Most of the posts against the mods arent opinions. They are sheer hate because the mod isnt Fallout lore friendly or because a dev created some questionable art in the last years. I dont even get that argument about the dev with the pony and loli porn. Not sure if you guys visited the internet in the last 2 decades but this stuff isn't uncommon and judging someone based on a fetish is rather immature. Probably the same people voted for gay marriadge but being a furry or into animated horse porn is too much to handle I guess? Hypocrite society.

Anyway, the hate is unjustified and immature. Just like often. However, I dont only blame the users but also the devs actually jumping on top of this and making a drama, taking down their mod, destroying it, cutting it into pieces, removing content and so on. It is beyond me how this situation ended up like that. And yes, I know there were also some questionable fetish quests in this mod, whatever. Most of you sickos would never admit being into such weird fetishes so as I said before, hypocrite society. Being triggered and leaving the hate for such simple things is just beyond me. You guys need mental help.

I hardly doubt this mod will end up good or well, let alone with the removed content such as voice acting. Voice actors pulling out because they dont want their names dirty are dumb. Probably the same people voiced these quests and werent like, "hey thats weird right?" before. From a business perspective I wouldn't even work with these people since after a game like Cyberpunk is out and the hate train is once again moving, they will be like, "I want no part of this, remove my voice acting". Immature bunch.

Best thing that might happen is, if some other modders from the community fix up the mess and put the voice acting back in but whatever. My hopes for this mod are dead and I would be surprised still seeing a happy end in a few months.

Boohoo, cry me a river.

1. You made your profile today, which makes you one or some of these three - one of the devs themselves, or an SJW temper tantrum kid in adult body, or plain troll.

2. Everything is prone to criticism, whether it is free or not. It doesnt matter, its called a right to express opinion. SJW folks are the ones branding everything as "hate" when they dont like it... but as soon as they like it, suddenly its "freedom to express" themselves. Hypocrites.

3. Sounds to me like youre one of those "weird sickos" by your writing here, basically persuading people "muh loli is not CP". Youre aware that there are plenty of sites, even adult sites, with clearly banned loli and shota stuff exactly because of those issues... CP is not a joking matter.

Its a laughing matter when some "white knights" would come here and defend this mod, when even the big name in Fallout like Rimmy on YT clearly expressed his disatisfaction , not just with mod, but with mod team themselves. As for the mod, for those who want to try, you can even get it just few posts below as Loyd_Mongo reuploaded it, and you can try it for yourself and see with your own eyes.

Joined today huh Son? Are you the Dev's new whipping kid? While, I'm at it.. You should stay well away from Moddb because nobody wants you here