Eve of Destruction is a free modification of the popular Battlefield 1942 game by DICE/EA, based on the Vietnam war.

No other military conflict is comparable to those dramatic years of the 20th century. Most rumors spread about the Indochaina and Vietnam War are not honest, even though it was the best documented war in history. No other military conflict was ever so controversial, pointing to an unloved fact: our enemy was not the only source of evil, the evil could be found within ourselves. The "Eve Of Destruction" mod is a tribute to the U.S. , ARVN and Vietcong/NVA soldiers who fought and died in Vietnam, and also to the Vietnamese people.

Eve of Destruction v2.50 has been released today.
It's a FULL version and an update from v2.40 to v2.50 is available (just download part 3 of the installer!)

The superheroes are in 2 funmaps with Chuck Norris aka Col. Braddock, Charlie Sheen aka Topper Harley, Mr. Bean and John Wayne :-)

The devs have not been lazy and we also get 7 new and 2 revised maps.
About 40 maps will have some bugfixes and new/improved AI. 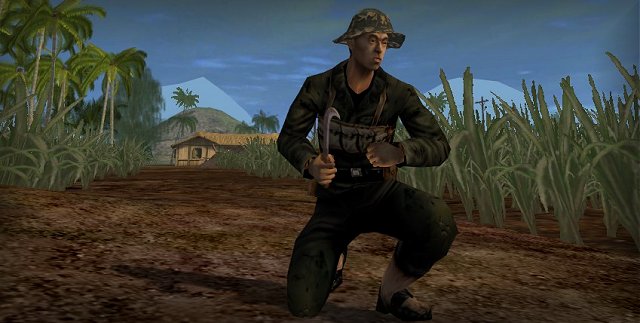 Eve of Destruction Classic, one of the longest active mods for Battlefield 1942, announces the coming v2.40 full version preview due early 2012.

Eve of Destruction v2.51 client HOTFIX installer. This patch will update EoD from v2.50 to 2.51

Eve of Destruction v2.50 Windows installer. This is part 1/3. For full installation you need files 1-3 for update just part 3!

Eve of Destruction v2.50 Windows installer. This is part 2/3. For full installation you need files 1-3 for update just part 3!

Eve of Destruction v2.50 Windows installer. This is part 3/3. For full installation you need files 1-3 for update just part 3!

when i save it to mod folder it doesnt show up

How many maps does the singleplayer have?

there really are, last i counted there were over 70, and the ai works pretty damn good on these maps as well, at least the seem better than in vanilla 1942

There are a lot. Just find out yourself - this mods have more than 30 maps for Singleplayer only.... yo hoooo.

Many good memories when EoD first released, a golden age of modding

Good mod. But the problem is the helicopters, which are impossible to control, even bots can't control them properly.... Plz fix this problem and everything will be perfect I think

EoD mod for BF1942 ended development since 2012 and Lotte|EoD is now focused on a standalone game which available on Steam. Plus, the flight physics of helos in BF1942 when it was introduced in SWWWII expansion pack are not as polished like it's successors like BFVietnam and BF2.

North Vietnam received a lot of tanks from both the former Soviet Union and Communist China, especially after the Paris peace accords in 1973.

Im aware that the North was supplied with them during the war and Im also aware of the fact that tank battles occurred. For a mod portraying a war where the common form of combat was infantry and airsupport in dense jungle I think it just takes away slightly from the authenticity when every map turns into a huge battle of kursk style tank battle.

Still one of the best mods/vietnam games there are though

The North Vietnamese won on that battle due to effective use of heavy artillery against South Vietnamese positions, and at that time the fuel and ammunition of South Vietnamese forces are heavily rationed due to insufficient supply (including the after-effects of OPEC oil embargo against US and it's allies) and granted aid by the US were cut by half, not to mention (no offense to Vietnamese living in the US west coast) the incompetent leadership of Nguyen Van-Thieu by not believing his intelligence community that large numbers of NVA/VC forces were building up around Ban Me Thuot.