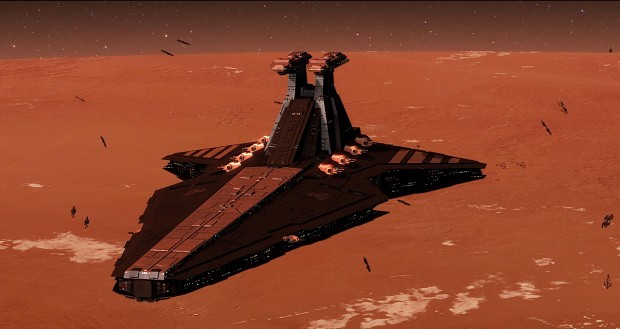 Will be retextured Turrets and bridge texture?

The turrets will not be recolored just like every other ship that has a different color.

A brown you WON'T want to flush away.

The might of the Empire shall flush it away for you.

So, no End of Days flagship for Sykes?

He starts in a Venator. Starting with a Keldabe is REALLY OP so you have to take him to Mandalore and buy End of Days

A new captain in the Zann Consortium attacked a massive cargo ship expecting to make its weight in credits. Instead when he broke into the cargo hold he found he was surrounded by brown paint and dead men.
Tyber Zann was not impressed with the wasted time used to steal paint. Time is money. The captain got fed to Cuddles.
Zann now sitting on millions of barrels of stolen paint that no one would buy decided to simply throw it on his ships to make them match his Merciless and be done with it.

So now Jerid Sykes is rolling up to the Shadowports in a Zannified Venator.