Map reworks! Bugfixes! Improvements! Cannons don't one shot anymore! Please do NOT play with other addons or gameplay mods unless they are specifically made for GS2, things WILL break!

Tons of bugfixes! Critical errors fixed! Rework of Pyro Pyramid! Cannons don't one shot anymore! Please do NOT play with other addons or gameplay mods unless they are specifically made for GS2, things WILL break!

Golden Souls 2 is finally here! An incredible adventure filled with dozens of colorful levels is waiting for you!

Save files are NOT compatible between different versions of the mod. 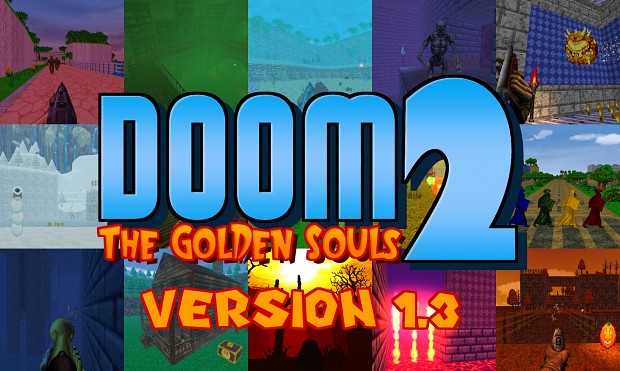 I had a good time for the most part, but there were a few hiccups peppered around in the campaign.

Mirror mountain and demon den has some jumps that are very tricky to pull off unless you are using a strafe-jump.
Sometimes light sources would begin flickering madly on and off, the ones I remember where the braziers in hell's overworld and in the boxroom in the cave UAC level, the one with the elevator.
Some big coins were head scratchers while others felt like they were just handed to you and personally I felt a little let down after the thing was over as I had just gained a powerful upgrade from the last shop which I only used for like five levels before the game was truly over.

Would have loved a sort of new game plus letting you use all the upgrades from the start. An array of more interesting usable items and perhaps some way to tweak the platforming difficulty would also have been welcome.

Now that I got all the negative out the way, let me start heaping on the praise.

Golden souls 2 has a very pick up and play quality. You got 30 minutes? Go complete a level. Though it is less suited for longer sessions.
Many levels are amazing, presenting unique challenges or visuals, but some levels lack behind, many ghost houses, cave levels, underwater focused levels and castles come to mind. Special shout-outs to the level in the mountains that has a cowboy town and the level in the third world with the lighthouse.

Enemy wise I was surprised from the first level with a clever plant enemy that takes more damage when you hit it while it is attacking. Ranged enemies like shy-cultists were always a treat, OMG why did you make a super revenant?!, other enemies being repurposed like the hammer throwing hell knights or the pain elemental becoming a demon hedgehog spawner like lakitu were also nice surprises, for all that is holy why did you make a super revenant, it lobs like twenty missiles at you with each shot, what were you thinking?!, even diverse underwater enemies aplenty, needless to say a neat mix of old, new and remixed enemies.
The large array of varied bosses were a treat, though some were definitely a larger threat than others. That poor boss from world three where less a threat than the first boss.
Likewise you might want to tweak the first boss of the final three, he killed me more times than the last two combined.

Upgrades were always exciting to get except the aforementioned last one, but it was hard at times telling what had actually improved and some things I wished would change with an upgrade didn't, like the self damage from the music gun.

Secrets are sown generously across every level, had to look up a guide to find it all, some of it is really well hidden and the myriad of references to other mods where just awesome and had me laughing at times.

Thank you very much for the valuable feedback! Please consider posting this in the review page of the mod so it's more visible. Cheers!

DUDE MAKE IT COOP <3 Its so fun with friends but the game eventually crashes from constantly spawning into each other on every level including the hub world. be fun with coop man Youtube.com heres a video showing it coop through gzdoom﻿

Got it Figured out. Had to use a different version of gzdoom. Was able to play Golden Souls 1 through coop. Now we plan on doing Golden Souls 2 on coop since I find it so amazing