Hello there! It's my new remake of original Doom II maps. There are dynamic lights only and a lot of new features now. Some places or elements were reworked, but i tried to keep original view. Also, this map-pack not using a new textures or sprites and have full compatibility with some mods or texture-packs (for example, Brutal Doom bugging somewhere, but it's not fatal, i guess) :3.

Required version GZDoom 2.0.0.5 or higher. For older versions of GZDoom you can find and download special FOGZ version this map-pack (link below).

Warning! Running only in OpenGL mode! Size and intensity of dynamic lights should be equal 1.0. Other values - not recommended.

ALSO! Zandronum is not supported! Do not complain about bugs if you use it!

Other series of walkthrough you can find here

All information about it you can find on my page (in blogs). May be not so much details, but i'll try to give a main news about development.

- Sectors with water working not correctly in Brutal Doom and Project Brutality. Headshots above the water can freeze your computer for a while. Also, punched monsters in the water just exploding without any reason. IMPs multiplying in water and s***ng a tonns of brutal bonuses (Partly fixed in new Brutal Doom, but still bugged in Project Brutality).

- Lamps in Brutal Doom keeps light even when broken. It occurs, because dynamic lights and lamps are different things. I can make light into lamps, but if you'll break them, some places will drown in darkness.

- Punched IMPs into chasm is not counted as killed by player. WTH i just said... Anyway, when you trying to punch IMP into chasm on map20 (with Brutal Doom or Project Brutality of course), he (or she... whatever) turns to something that isn't "monster". So, theoretically, you kill monster (body disappeared, corpse spawned), but it isn't counted as killed. 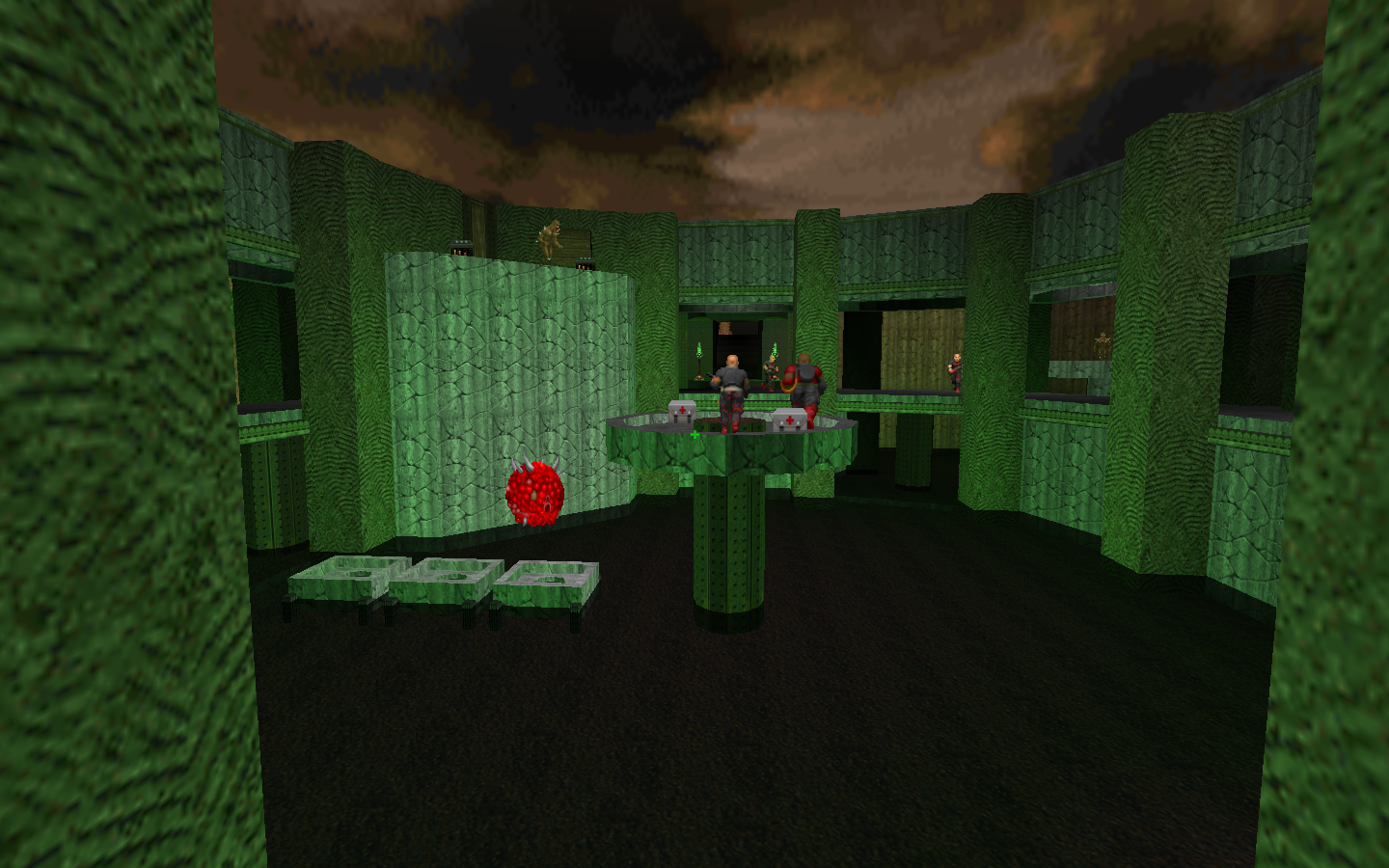 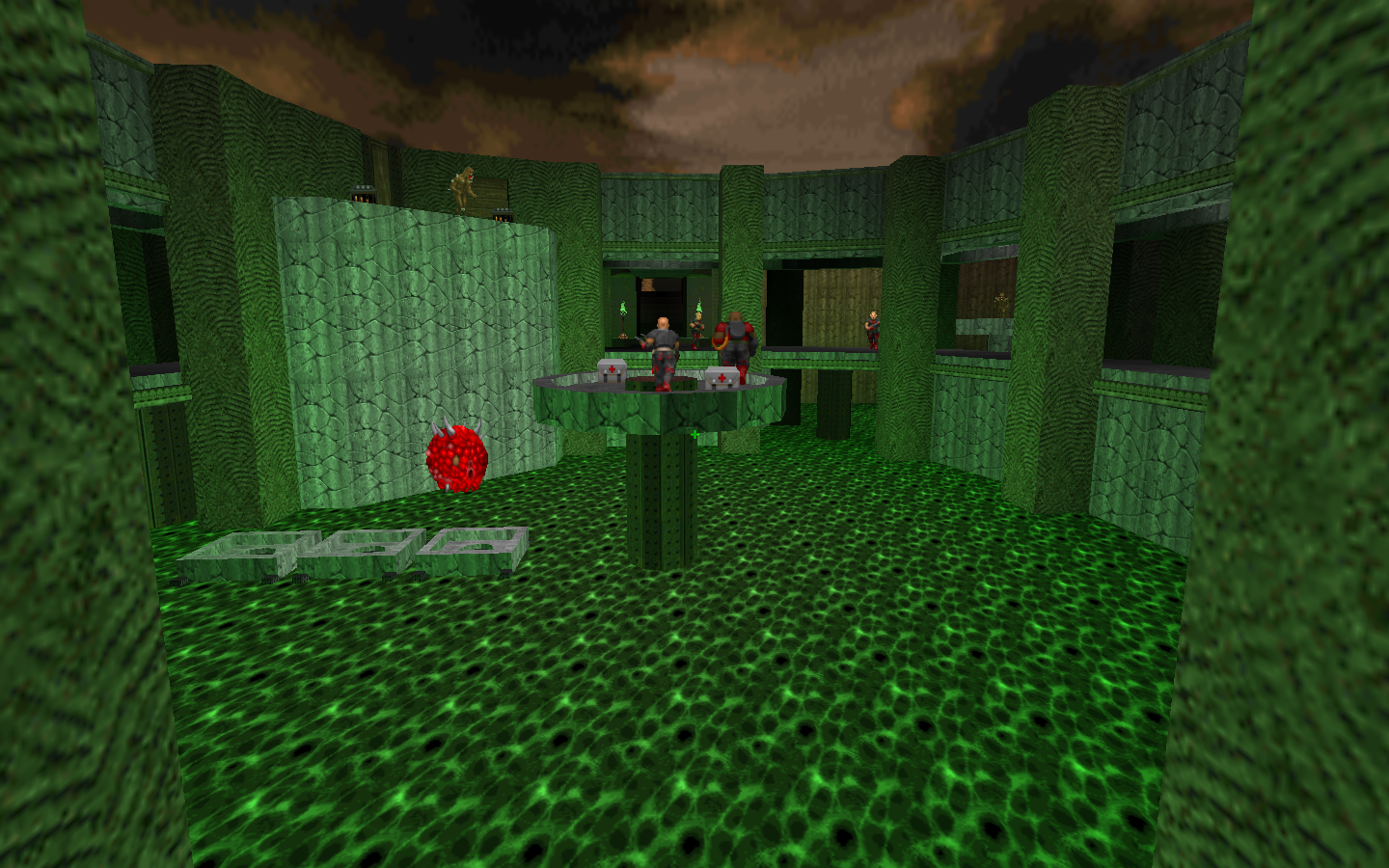 WARNING! It's version for compatibility. Look requirements below

Hello there! It's my new remake of original Doom II maps. There are dynamic lights only and a lot of new features now. Some places or elements were reworked...

Is there any Ultimate Doom or Plutonia equivalent?

I just discovered this mod for the first time today and I love it. Fantastic work.

Is there anything like this for The Ultimate Doom?

+1 would love to know if a similar UD mod is hiding out there :)

I did a similar work with doom 2 maps but this has the UDMF effect. Very nice job. I played the first 6 now and wanted to say thank for the effort.

Yeah it fits with EVP and Project Fatality-- i mean Brutality

Wooo can't wait to do a blind PT/LP of this with Project Brutality bleeding edge and UV UltraNM difficult >:)

Oh and without dying too

Just finished it... it's amazing!!!!!!
Definitely in love with the dynamic elements like the train and collapsing buildings. The downtown level is epic as well truly feels like a city now. Final boss was very challenging and a neat twist on the vanilla fight.

I do have 2 nitpicks though: Insta-kill lava pools and a lot of areas being way too dark (though the latter could be a gzdoom thing). But overall, VERY well done :D

I did a gameplay video showcasing highlights of the mod with Brutal Doom if anyone is interested :)

It is very dark, but darkness is additional pro for me with brutal doom v21 flashlight :)

Nice :) Btw, you can turn off insta killing lava. Use console command honte_instakill 0