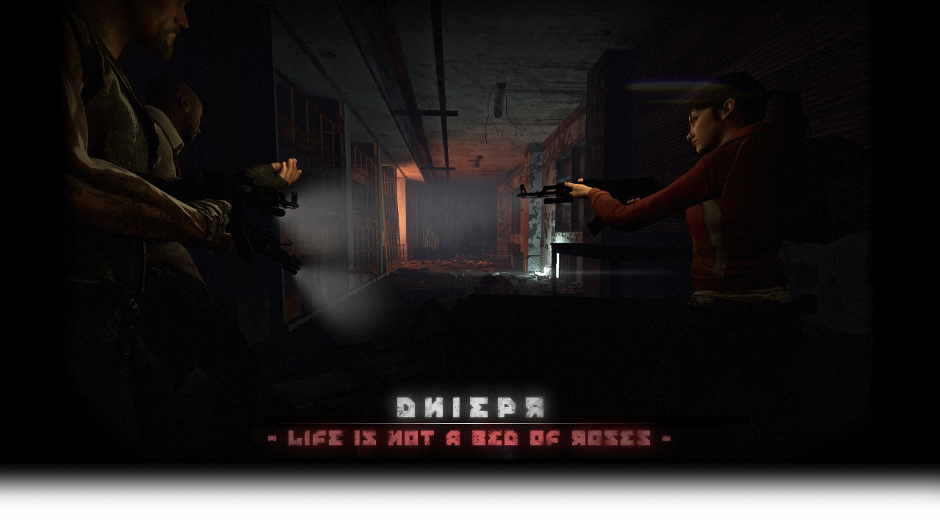 The campaign takes place in real and imaginary places of Prypiat. The development lasted more than three years. The campaign consists of four highly detailed levels, more than 200 models and 400 textures. An original soundtrack and sound design completely created for the occasion.

Dniepr will be playable at the exit in four game modes: Cooperation, Versus, Survival.

OST Dniepr is available at:
Maelvignaux.bandcamp.com

Hello my dear folks of moddb,

It took us quite a while but the standalone version of logistique will be live on steam starting... now !

The version 1.12 brings some enhancements and fix based on feedbacks we got from the community. The update will also be available on moddb in the coming week.

But let's cut to the chase: It's available here !

Also don't forget that we are working on our next game and we could definetly use all the love we can get !

Thanks a lot for reading me,

Newer version, better version. We corrected a huge amount of bugs and enhanced the mod's content a lot.

As you all know, there’s only a week left until the official release of Dniepr. In order to celebrate this, we’ve made a little cinematic trailer...

Each hour that pass bring us closer to the release of Dnipr, that is now definitively fixed for 20 May 2013.

Dniepr v1.1. Correcting a MASSIVE amount of bug. WE highly recommend you to delete the old one !

I keep crashing on the 2nd map near the secret room, every time, two times I entered the room and the game would crash right at the moment I exit it. No error message just game shuts down, Did anyone encounter such thing?

where is that freaking golden key and why doesn't that code work in chapter 2?

Vote! I don't know what else I have to say. Despite all the BS review in the L4DMaps website trashing on this project. But, It still be great if you guys make it. Best of luck guys!

Love this campaign, it very well made. The atmosphere, the OST, every thing it carefully well made. Playing this I feel like playing Metro 2033.
BUT there is a bug with the AI at the end, they did not enter in the truck :(
I would like to see more maps like this, only one weapon to pick, gather items to open the path, true apocalipsis feeling, darkness... Keep going gents, I folow your job and enjoy it.

It seems that the mod was removed from the Steam Workshop, your website won't load and I haven't heard anything since May, is something up? =o

They got pretty critized at l4dmaps.com and realized they got alot to fix. Some people say it took them so long because they had no idea what they were doing... I don't know, maybe they are fixing the bugs people reported and that is what's taking their time now

Weird, I didn't think it was *that* bad. I think if I had any critiques it would be the few minor bugs (disappearing table at the start of map 2), the over-reliance on special infected (a problem that plagues far too many campaign mods), and the fact that the transitions never lined up between maps.

Hopefully we hear something at some point though. It would be a shame to see this mod pulled because of comments like the ones you mentioned Kaernk.

Apart from the OST being too soft, and the radio being completely inaudible, the only bugs I have noticed thus far with 1.1 is the missing table at the start of the second map and the blue text at the end of the mission does not wrap properly causing the text to go off the left and right sides of the screen.

We are working on a solution for the volume problem. But it's pretty hard. The only thing you can do is to lower the general volume level of the game and raise the music volume. (radios are part of the music volume)