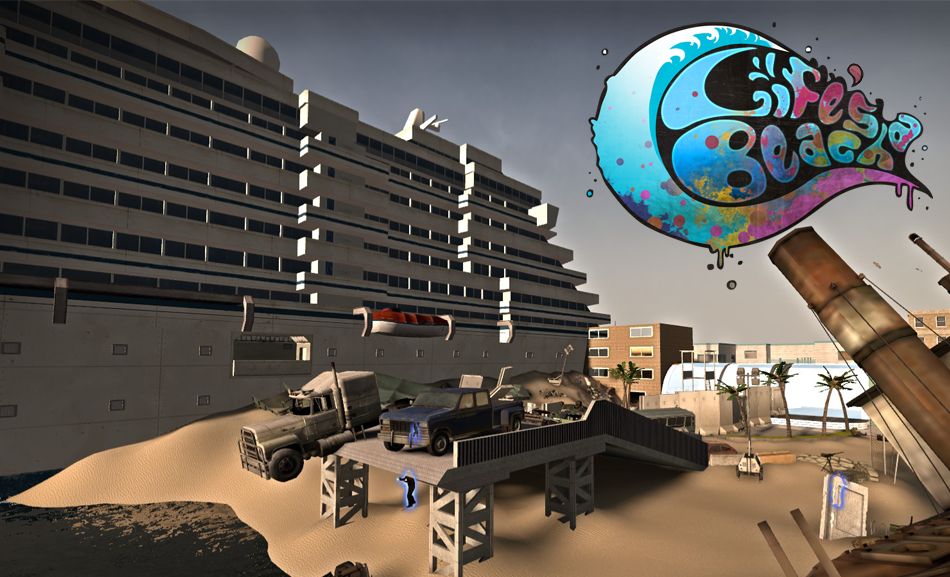 Life's a Beach is new campaign set in the sunny beach town of Rio Sierra. Players will take control of 4 new survivors in a story that takes place after the events of L4D2. Our Survivors (Ryuji, Jay, Kelly and Morag) find themselves trapped on a crashed cruise ship filled with infected hordes.

Over the course of Life's a Beach players will fight their way out of the ship and through Rio Sierra to discover a secret that could bring about the end of the infection.

Prospect is aiming to provide players with a fresh experience with a variety of new content including:

Life's a Beach Cancelled - What we are moving on to.


I expect most have already guessed that Life's a Beach has unfortunately come to an end. First, an explanation. Life's a Beach was very ambitious, we learnt a lot while working on it but realised the scope was far too big for our team. We also have plans for the future (something I'll expand on below) and LaB was starting to interfere with them. We're happy to have re-skinned the entire Special Infected cast and we also helped release Gridlock, a natural disaster map.

We managed to get this far because of the people who contributed so much to the project and the fans who supported us. This project really gave us the confidence to continue making games and that's what I'd like to talk about next...

We are current developing several titles for mobile/tablets and have just released our first game, Bypass. It is currently available for Android and will be out on iPhone/iPad in the next few weeks. If you are interested in Bypass check out our indiedb page, and the trailer below:

Thanks for your support through the Life's a Beach years and we hope you continue to enjoy our work. You can follow our progress via the links below:

Updates on Life's a Beach, our new survival map "Raise" and the future of Prospect.

We went dark for a while... but for good reason! This update includes screenshots of our custom survivor Jay and a side project I've been working on...

The Tanned Tank skin is almost complete, check out screens of our penultimate Special Infected skin inside! We also have new episodes of The Saferoom...

The first of our two new Tank skins is ready to download! Check out the images and try it out for yourself! The next episode of The Saferoom is out, we...

Ryuji is the first of 4 custom survivors who will feature in the L4D2 campaign "Life's a Beach". Ryuji was a prisoner in a maximum security prison, incarcerated...

The Junkie Spitter will feature in the Left 4 Dead 2 campaign Life's a Beach along with re-skins of all Special Infected and brand new Survivors.

The Beach Boomette will feature in the Left 4 Dead 2 campaign Life's a Beach along with re-skins of all Special Infected and brand new Survivors.

The Beach Boomer will feature in the Left 4 Dead 2 campaign Life's a Beach along with re-skins of all Special Infected and brand new Survivors.

The Hobo-Hunter will feature in the Left 4 Dead 2 campaign Life's a Beach along with re-skins of all Special Infected and brand new Survivors.

Will any of the maps ever see a release?

You know, I'm actually not that surprised. Not the first time people bite more of than they can chew.

Can't wait till this is released :3

Thanks! I'll be posting an update soon too, lord knows we need one!

In case anyone is wondering we are not dead! We should have an update soon explaining what's been going on along with some new content!

Is the music going to be like surfrock or chillwave or something? Because that would guarantee this mod be the only game I play for months.

Most of our custom music has a 60's/surf rock vibe, we've just acquired a new musician as well so in a few weeks we might have some new tracks to show off.