CWC is a C&C Generals Zero Hour Total Conversion and also works with "The First Decade". It takes place from 1980-1989 and features realistic units from the 80's. We want CWC to be a mixture of realism and fun. CWC is more realistic than vanilla Generals, with real life weapon systems and side specific characteristics. CWC offers 2 factions: Russia and USA. The Russians tend to use tanks and artillery (for example: T-72 / T-80, BM-21, 2S1 only to mention a few) while the USA rely on aircraft and high tech units (for example: F-15, F-16, F-117, A-10 etc.). Also we we have a lot of infantry in the game, not all of them are just cannon fodder.

Travel back to the 1980's Cold War era and control either the USSR or US forces in their struggle to achieve military superiority.

Travel back to the 1980's Cold War era and control either the USSR or US forces in their struggle to achieve military superiority. The mod is Cold War Crisis for C&C Generals: Zero Hour. After four years in development does this mod earn a download or will it crash and burn behind enemy lines? 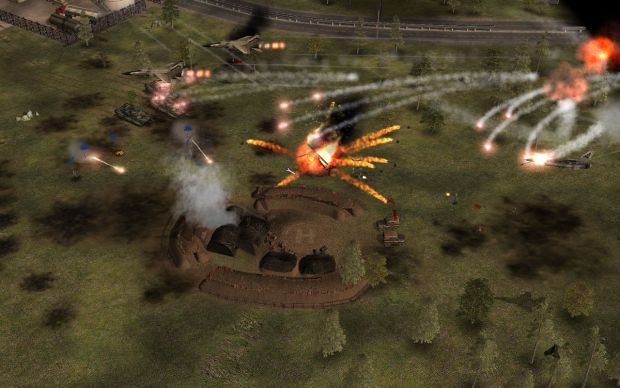 Cold War Crisis successfully captures a realistic European look featuring all original art. While all the units are rendered in a realistic scale, large overhead icons help maintain the readability of different units types. Everything from the small countryside villages to the custom textured landscapes maintain a consistency in art style that establishes CWC's unique look. Even on an aging platform like the 3D SAGE engine, the CWC team has proven you can still captivate the eyes without using the absolute latest in graphical enhancements. 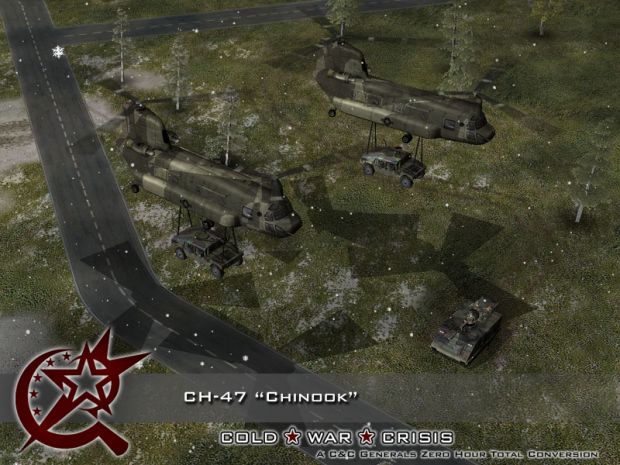 Must have ordered these Humvees with "rush" shipping.

The voice work in this mod is great. Its, crisp and clear and helps define the story and characters. The sound track is all original which is yet another plus. It hits all the right notes and lets the action take a front seat while keeping the suspense high during lulls in battle. Weapons effects sound a bit on the tinny side. Stringing together effects with some more battle chatter would go even farther in helping amp up the intensity of engagements and steer away from making units feel toy-like. 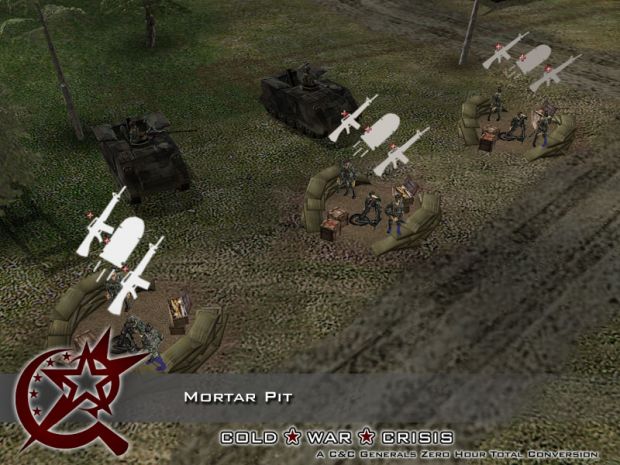 Cold War Crisis feels like a true total conversion. It exhibits the polish in presentation that makes the whole experience go down smooth. While other RTS mods may add in a few new units to use in multiplayer, Cold War Crisis goes the extra mile. Singleplayer missions, punishing skirmish AI, and a full introductory tutorial are all part of the package. The AI could do with some tuning in order to make the mod a little more newbie-friendly. It managed to kick my ass every single time on easy and I'm not exactly a slouch in the RTS field.

Resource management is done by building initial base structures to provide supplies and fuel. Additional buildings around the map have to be captured to append to your resource pool. Without fuel, all of your vehicles will cease to function—making it much more vital than the traditional "power" resource used in C&C games. Individual infantry units have different stance and secondary functions as well. Going prone will stealth your units until they start to fire. This places more importance on the micro-management of units. All of these features move it away from the C&C influence and add a decidedly Company of Heroes feel to the mod minced together with bits of Operation: Flashpoint. It's more about tactics and small troop movements than anything else.

Cold War Crisis manages to change so much of the original Zero Hour game that it proves to be a major departure. It has enough depth in its gameplay to keep you entertained for hours on end. Now if I could only beat the AI...

Gameplay footage from the preview build.

Good article Stenchy. You are right, the firearms do sound a bit pop-gunish (atleast in the preview). But overall the mod looks very solid, and I'll definitly be giving it a try when its released.

I actually kinda like how it sounds, gunfire usually lose more of their bass sound the further you are from them. The preview does seem to be missing some particles in its explosions though.

That's true, they had been redone when the Preview was made.

BTW: right now we are probably testing the last final internal version. If no more bugs are found a release in a few days is very likely.

It took me a while to finally beat the AI...ON EASY. It's tougher than expected. One thing I learned is that you have to specialize in something and kinda use that to attack. You can't just sit there it's good to keep harassing the computer and attack him as far away from ur base as possible.

I specialized in air so when i got JDAM's I just bombed the computer to heck, used my heli's to scout and defend and ground units just to suppliment.

simply an amazing amount of work put into this mod. as you guys said, many mods just ad a few new units and call it a day, but even other TC mods that put in heaps of new stuff still dont put in this much work, especially with the cutscenes, you guys have brougth them back to a frequently used level and it's the way RTS's should be. absolutley stunning. excelent mod. 10/10 from me.

I liked the beginning of the trailer when they showed the training kinda a copy of Operation Flashpoints training. Looks great, and I enjoyed the demo when it was released So I'm definently going try this out.

You know...I was thinking the exact same thing about the training. LOL

Thx stenchy and also you guys for the feedback.
It's true, the Tutorial really is an hommage to OFP, we just love that game.

BTW: The AI really is a challenge, it has even kicking our butts a couple of times. The games against other humans usually are easier though, they make more mistakes, hehe ;)

Hey, is there any chance that you all can make an add-on pack with radio chatter and beefier sounds? Really, thats all I see thats missing from the game, like Stenchy said. But awesome job for a release, none the less.

That's not planned right now before the release. But should there be a high demand for it after the release we could (but I don't want to promise anything at this moment) change some sounds later on or add some fresh voice-samps.
BTW: Because we have a very easy auto-update function included in CWC nobody would need to DL the whole mod again just because there was a small patch/update/addon, the autoupdate would just download the new stuff, install it, and you'd be ready for the action again ;)

The heavy metal one? The song is called "Synapse" from the Band "Trashcanned".

I don't know if it will be in the final version but they do have one voice from OpFlash: "Move to.. bush at.. 12 o'clock." :D You hear it sometimes when moving units.

Yeah, lal, you can hear it when you order officers :]

ps. If you're wondering how I got this information, that's because I'm a beta tester

I've play the demo for hundred time and this news is so good :D...I can't wait...

This mod has alot of potential, can't wait for the full release

Potential you say? This mod could actually be eventually on RETAIL! The hard work they put into it is more than worth it.

I find this mod absolutely astounding! What the CWC team did was literary make and entirely new game. I can definitely see a future in gaming success for the CWC team. Absolutely outstanding. I've waited for this mod ever since I ran across it looking for good C&C Zero hour mods and have kept an eye on it ever since. If C&C was never released and these bright young minds came up with this idea they would be rolling in cash now and could literally start their own company. Great work guys I just can't say it enough. You should seriously consider selling this on the shelves at Best buy, Wal Mart, and Circuit city because you could make a ton of money off of it! I played the demo and I was so surprised at how much more skilled and harder the AI had become. I was even able to pull off a Blitzkrieg! That would have been something I would have never been able to fully do in the vanilla version of of C&C. Because of your incredible work C&C is no longer a game that just any person can play, It's a game that requires real life battle tactics and cunning to do. Not only that it makes you think. Best mod I have ever seen, good work.

Excellent Mod! I am a big fan of both Command & Conquer and Operation Flashpoint. This mod is a dream come true for me and a few other friends. Defiantly a download.

Release is Monday, July 28th in case you missed it ;)

Network.flosoft.biz
You can get it here!!!!

Not anymore, that was a 24h event for registered users ;)

ya know... it kinda looks like world in conflict

the game is great! when are you guys going to release the European units??