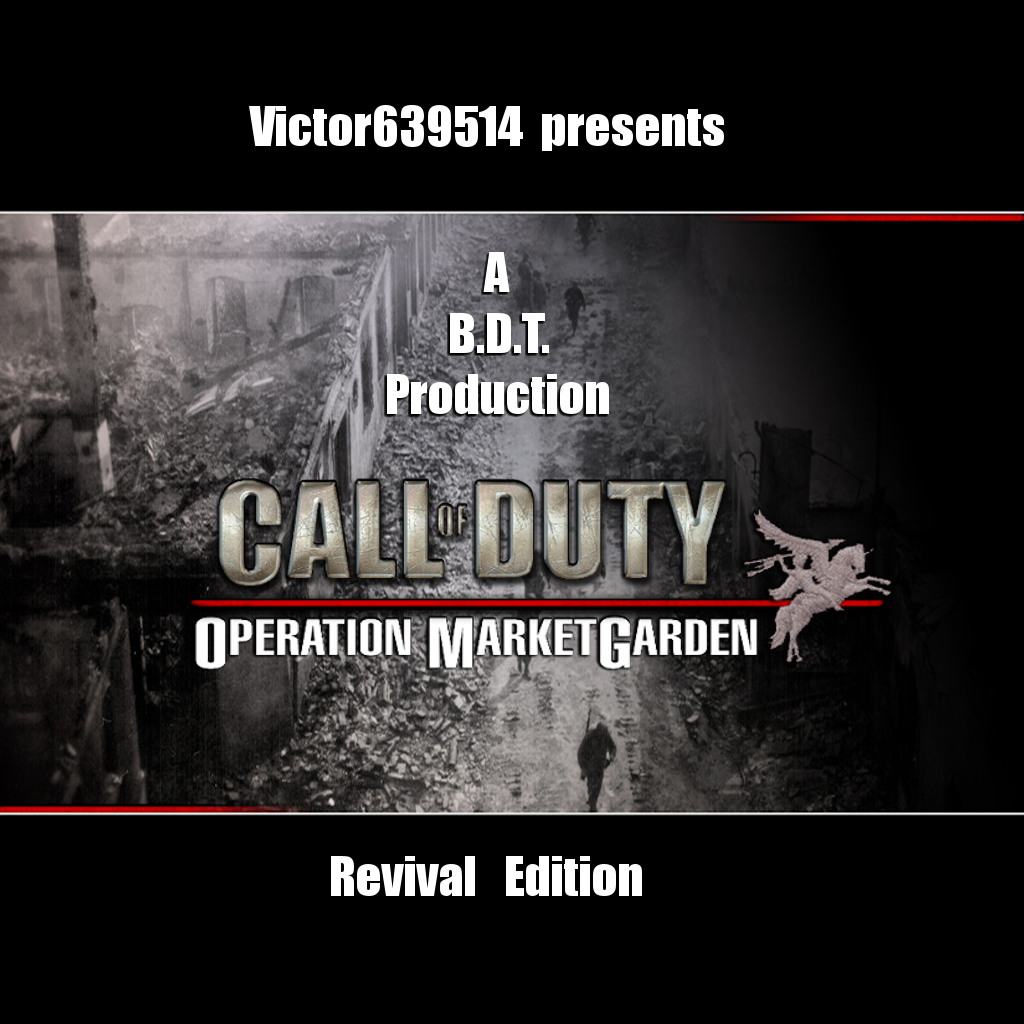 What's currently on my mind is the Operation Market Garden project by the Benelux Development Team way back in 2006.

While it is a beautiful piece of work, it is sadly unfinished and some parts of that really show (for me at least.) So now here I am fantasizing about how good of a mission pack or standalone mod this project could have been if the production had pulled through in a complete fashion.

Perhaps the maps could have been better polished and rendered to recreate the Netherlands landscape and architecture for building structures, etc (especially the unfinished-looking Arnhem map, or at least the city half of it... the bridge looks splendid though). Maybe some better looking model skins for the different factions of the operation (American 101st, American 82nd, 1st British, Polish Brigade), and new weapons such as the PIAT for example. All this among other things... well, that's where this REVIVAL pops in.

During this time, me and a fellow COD mapmaker djole22lt ---> ( Moddb.com ) have brainstormed for a bit, and thought about possibly giving this mod a revival treatment to be remastered and brought up to the quality of the "United Offensive" expansion. In addition, it can even be included in a massive singleplayer mod for United Offensive titled: "United Fronts" made by our good friend Marcomix ---> ( Moddb.com )

The covering of the operation can have room for quite a vast number of key scenarios throughout Holland. The overall campaign could consist of 22 Missions within these 12 sub-campaigns. (subject to change, of course)

I know that not all the mission are in chronological order, otherwise it would be confusing if you jump from sector to sector every time. Also you could play many different characters. Once you will be a regular infantry soldier in the British 1st Airborne, a mission later you will be member of the American 101st or the 82nd Airborne, and perhaps even a tank operator among the British XXX-Corps.

The order of the levels could show you how this operation slowly changes into a disaster that had a huge impact on the following months of the war. There could be quite some variation in the missions, but most of all, it could be a front-line-ticket for the hardest struggles in Operation Market Garden.

What we have in mind is to expand, enhance, and hope to fill the blanks that were left when the original B.D.T. team project came to a close. I am no mapper myself, but I greatly feel like giving this mod and its content a breath of fresh air can lead to a good creative undertaking for the classic COD.

Djole22lt is already working on his own Market Garden content for "United Fronts", but anyone else is welcome to chip in and help this revival take form, whether it's for mapping, designing, modeling, scripting, voicing, etc.

And of course, I contacted the main authors of the original OMG mod and they have agreed to let us tinker around with their mod, as long as they are credited as well.

Anyways, that's all for now. Till' next time!

Hello, everyone! Apologies for the silence and the inactivity. Life and other projects have kept me and others for a loop. Nevertheless, I suppose I owe you all a much needed and interesting update.

Thanks to the decompiling/conversion efforts by djole22lt and I, MP_Arnhem from United Offensive's multiplayer has been made a single player map, but with noticeable differences. Changes had to be made due to the rough nature of decompiling and remaking such maps, but ultimately the end result should be good enough to say the least.

Originally, djole22lt or I were going to script the mission for this map, but found it too taxing with life and other projects on our plates. So all things considered, I am leaving this map and all its assets to you, my good people. Included with the .ZIP are the .BSP, .GSC files, and the .MAP file for mapping purposes on RADIANT.

Should you ever be interested in scripting the mission idea below, please send me a PM. I'd be interested to see and follow up on what you do with this map. I can also provide you with the numerous voice clips I have amassed and collected for this map. Lastly, send me a PM if by any chance you find missing textures or assets. :) Enjoy! 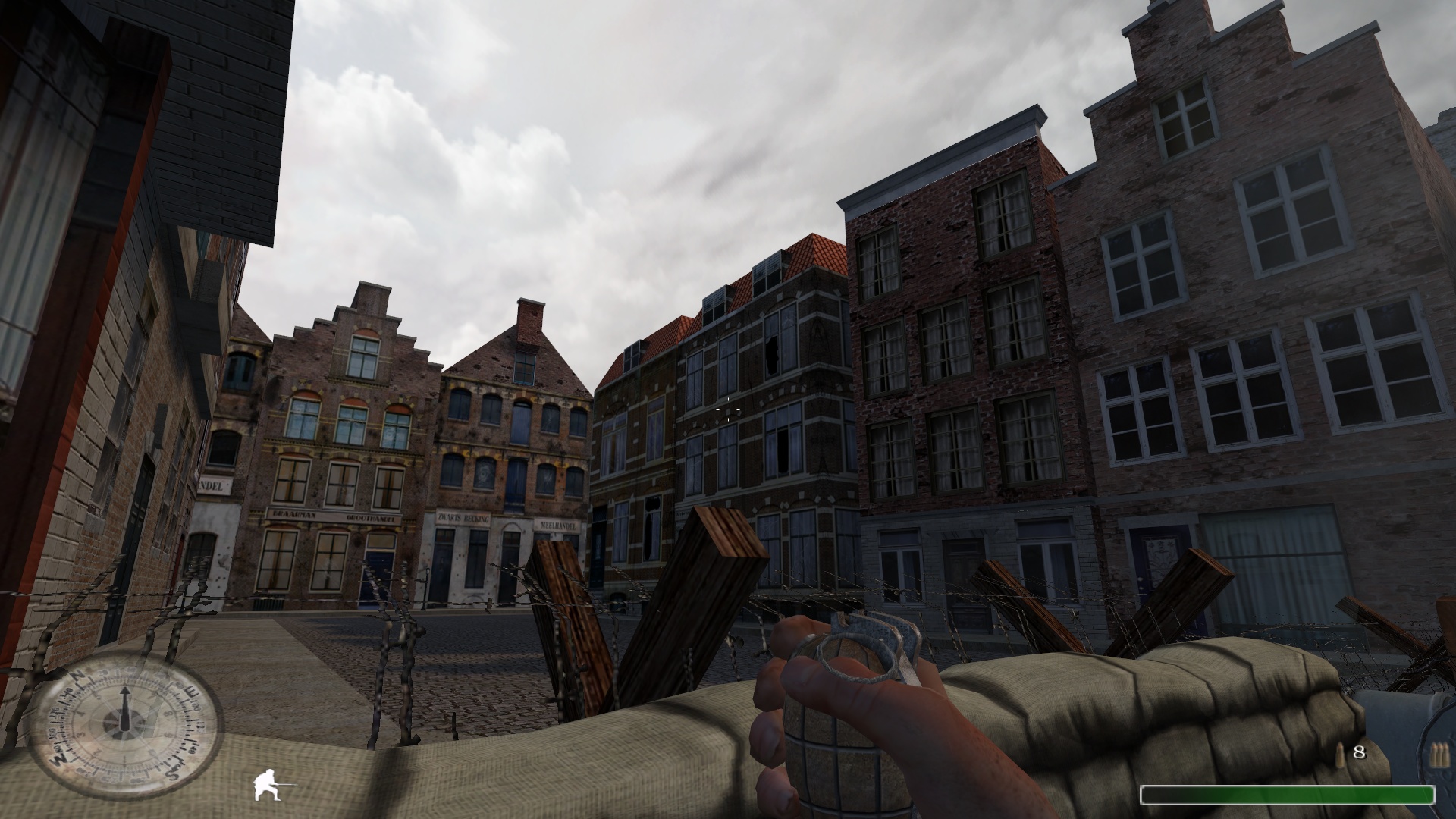 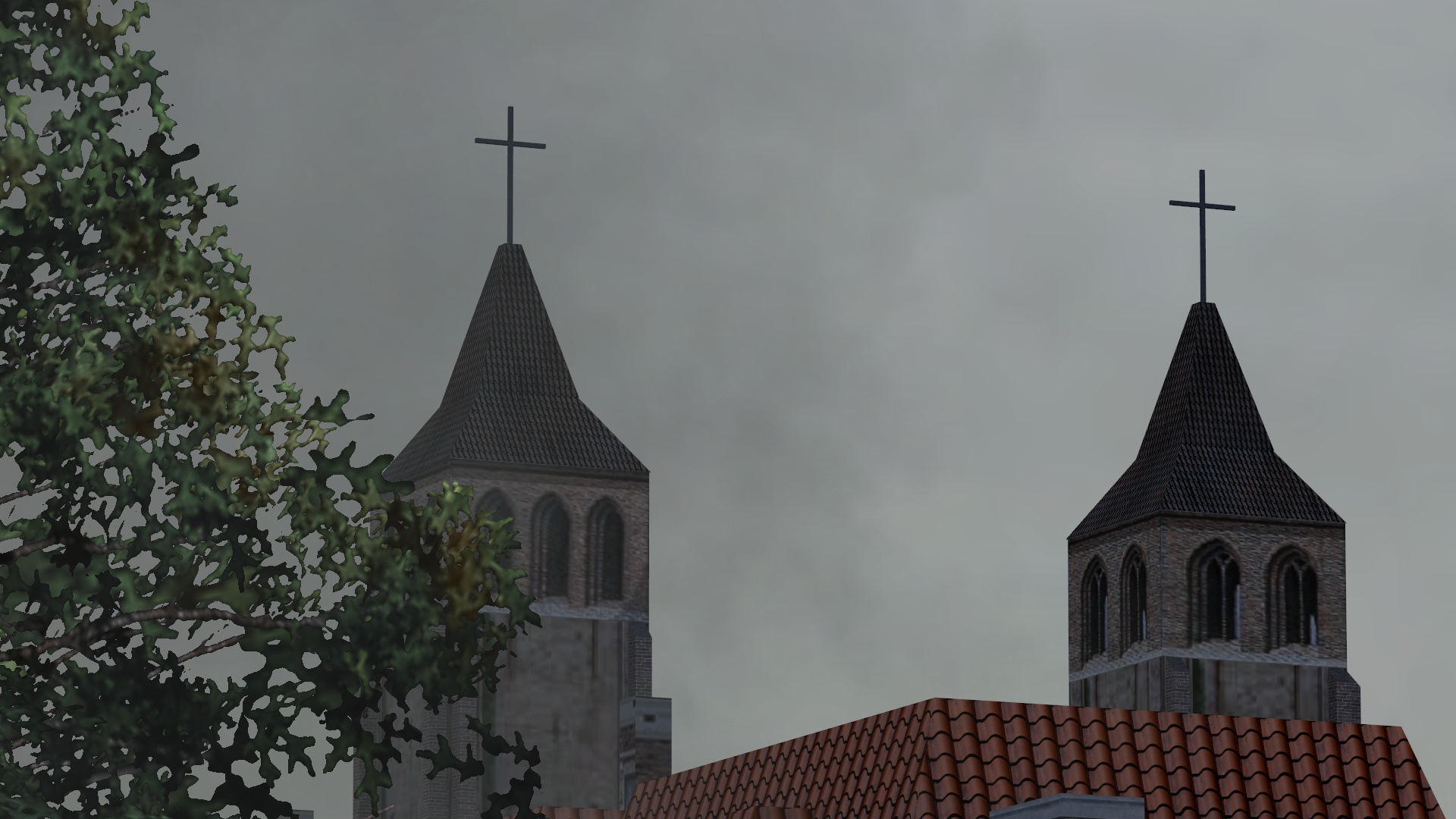 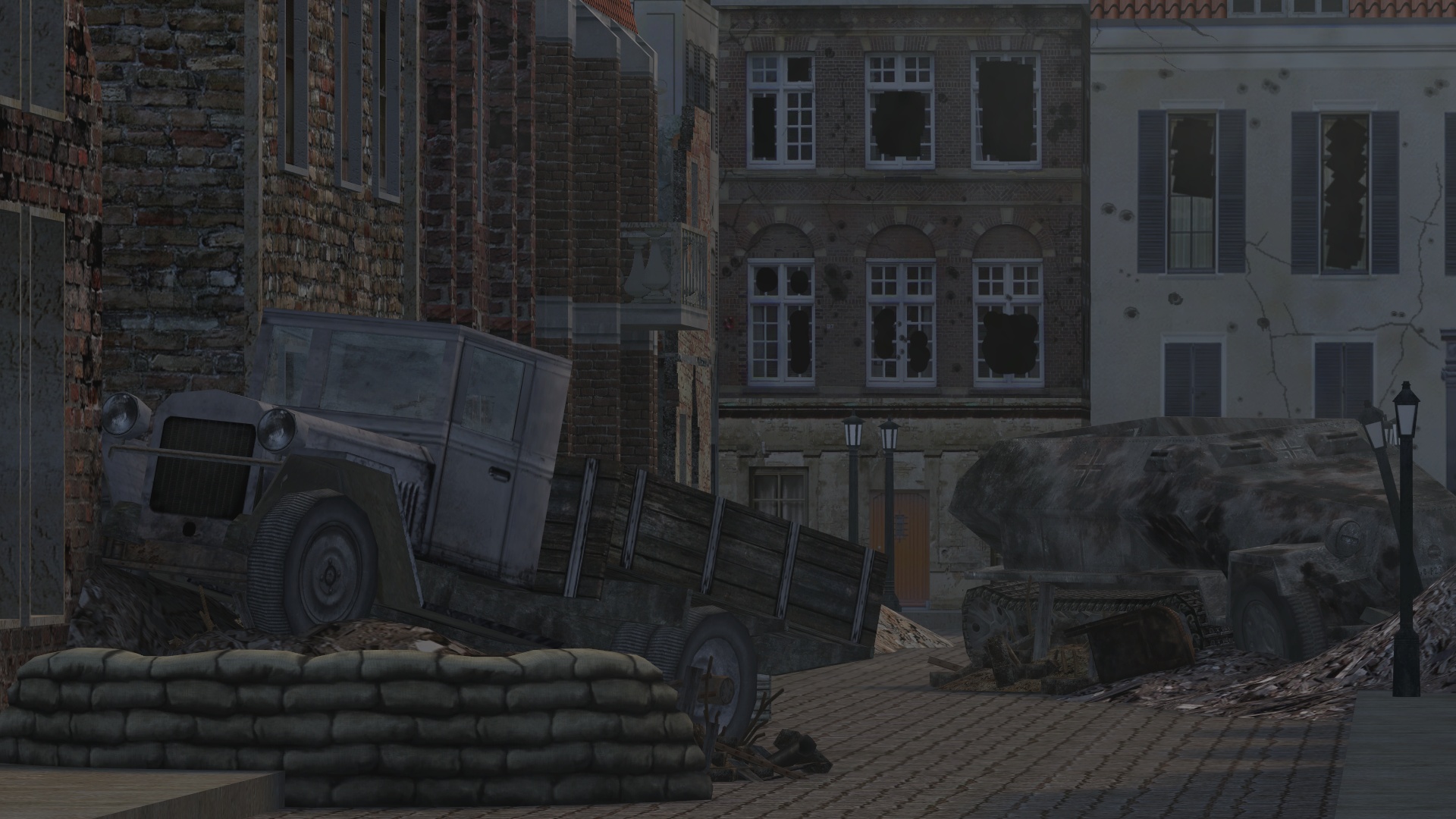 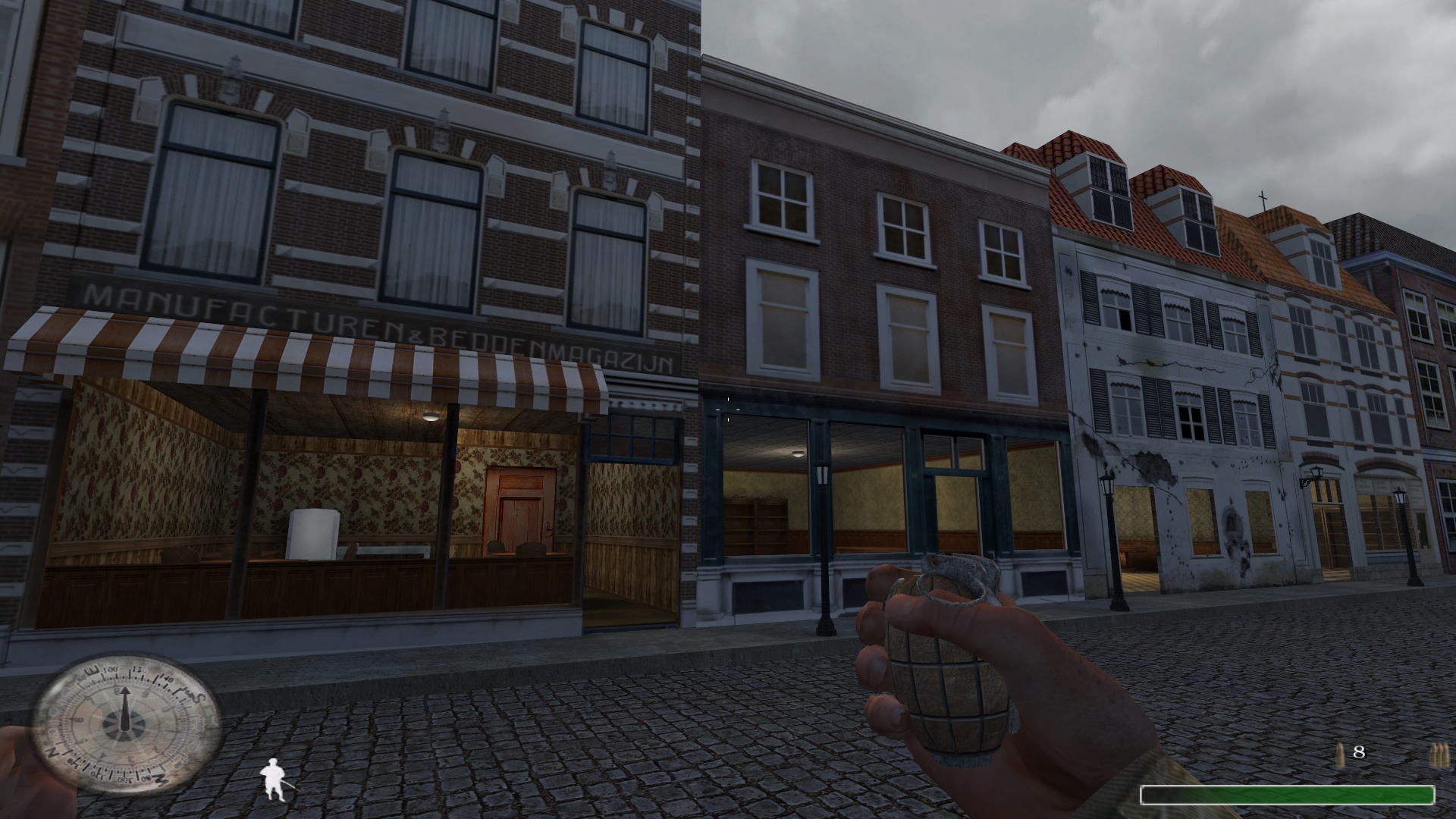 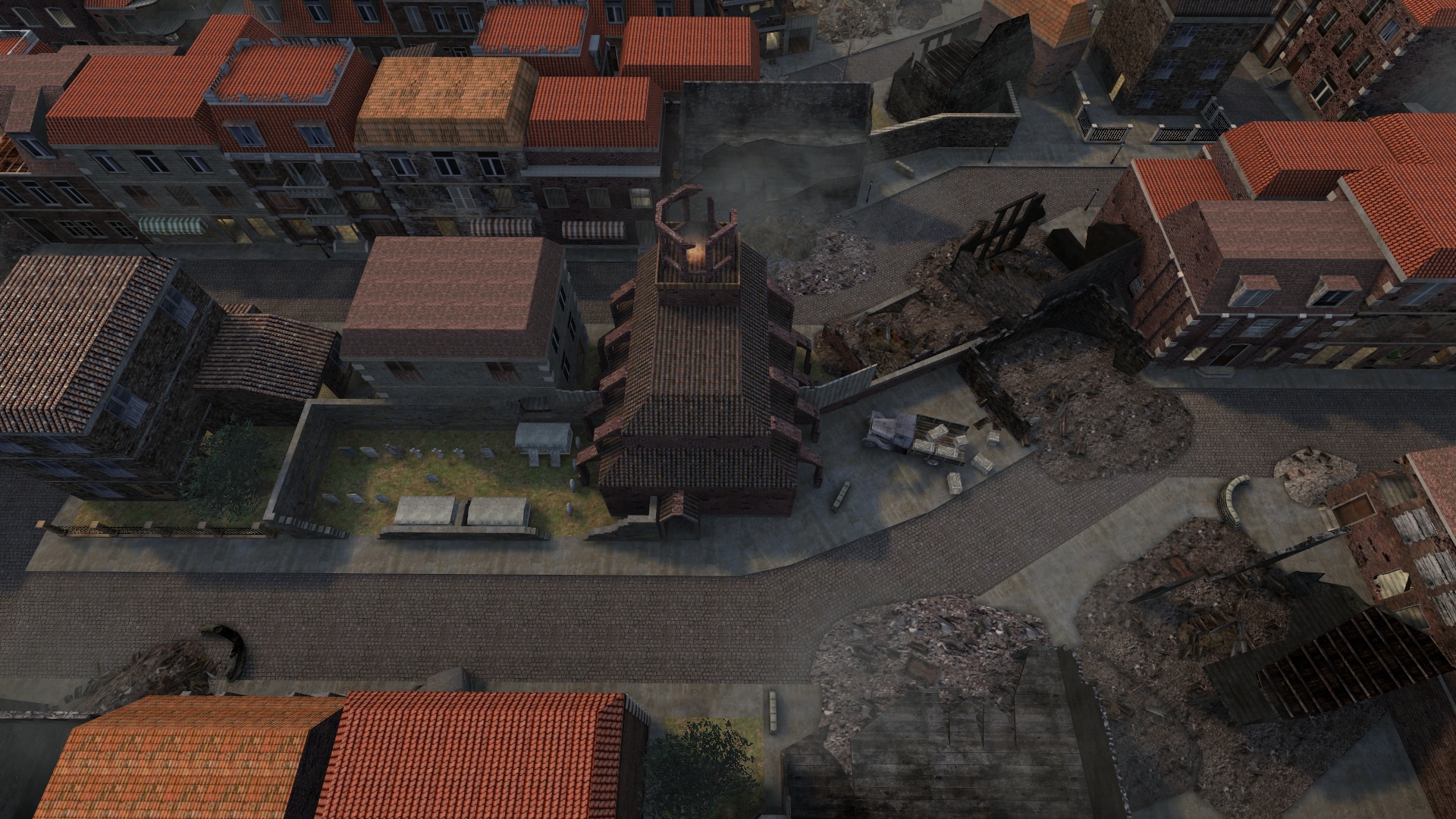 With the 2nd Battalion’s situation at the Arnhem bridge growing increasingly worse, you are among a company of paratroopers fresh out of the Oosterbeek perimeter on a mission to relieve and reinforce their fragile grip on the city. In addition to doing so, your company has taken up positions overnight in a neighboring market region not far from the bridge. This holdout zone has medical outposts, munitions points, and a makeshift radio station.

On the following morning, a small group managed to steal a few supply trucks to help sustain you and your mates despite the overwhelming odds. In a last ditch effort to help Col. Frost and his men, a platoon of your unit has dashed its way to the bridge. Some have even planned to stay through the following night at said perimeter. Unfortunately with heavy German infantry and armor surrounding the city, as well as artillery and air strikes, many paratroopers are scattered and holding out to stay alive rather than take the bridge anymore. The platoon retreats to the holdout zone with less men than what they started with.

And this is where your mission begins. Your holdout zone now serves as a fallback checkpoint for 2nd Battalion’s scattered men. Your mission is to fight alongside your troops, assist medics any way you can, beware some aircraft strafing runs, and ward off enemy infantry and armor. Tanks will rove through the streets, blasting buildings and preying on your company. There are a few stolen enemy AT weapons scattered throughout that you may use against them.

Securing the bridge has long since failed. The only remaining forces at the bridge are just to keep the Germans occupied while you evacuate. Now it’s survival. To clear some way out of the city and fall back to Oosterbeek.

Looking for helpers for my REVIVAL of the BDT Team's "Market Garden" mod.

Are you still working on mod? :D

You should use the PIAT from African Fronts mod.....

Hello, Whats-up? Wondering how the mod is doing. I worked on the Call of Duty Operation MarketGarden mod. Don't forget to add the soldier that is taking a **** in a mission! Thats me. Good luck!

Well, the mod's been kind of floating in stasis, but I have a semi-new development to be announced in an article here soon. So stay tuned ^^

I am very pleased to hear all this!!
Played coduo mod Operation Market Garden (OMG) several years ago.
I liked it very much. Thank you for this good news......

Is this mod still active?

when the mod will be completed ?

As soon as djole22lt and I finish enhancing the campaign, as well as he finishes his Market Garden maps for "United Fronts".