Blood in The West

Blood in the West is a Lord of the Rings modification for Mount and Blade Warband. It focuses on the SP campaign. 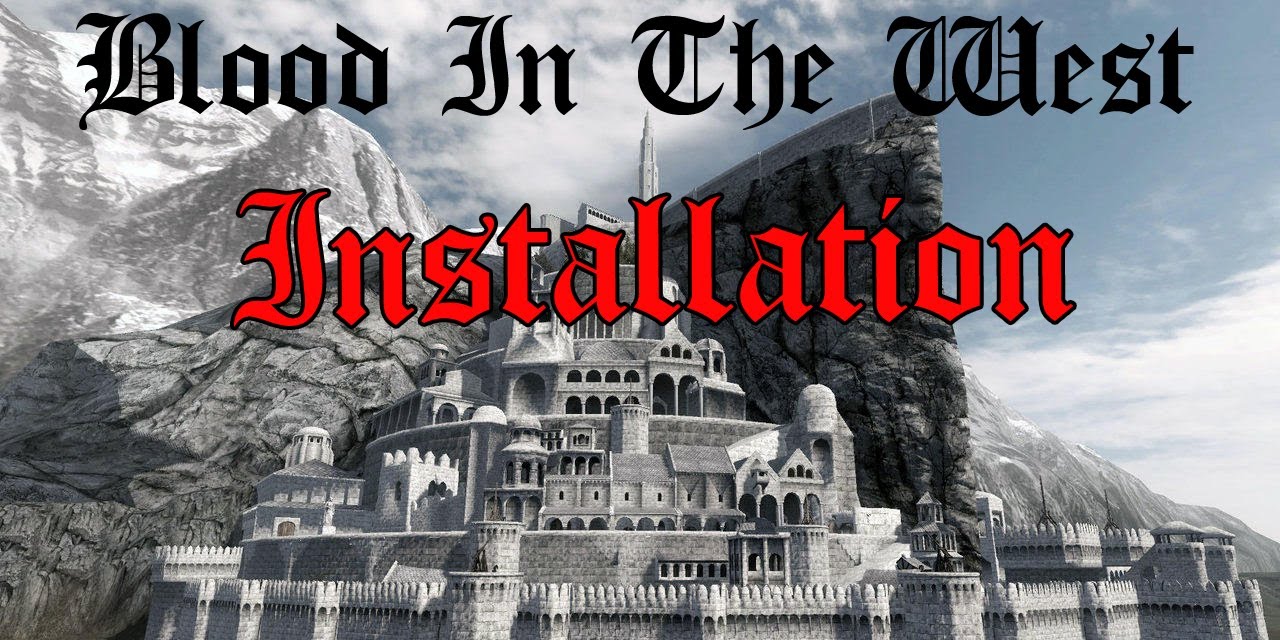 For both Steam and CD users:
1, Download the mod from here moddb:
Blood in the West DOWNLOAD
2, Extract it (using Winrar or Winzip)
3, Grab the extracted folder named "Blood in the West Final 1.0" and search for your MAIN Mount and Blade Warband folder on your computer. (steam users in their usual ...steam/steammaps/... etc, CD users usually in .../program files (x86)/...)
4. When you find your Mount and Blade game folder, go inside, there you will find a folder called "Modules". Paste the mod INTO it (you're doing it well if you find the Native folder and the other mods you've installed in the same folder).
5. Launch MB Warband, and scroll down in the Launcher for Blood in the West. Keep in mind, set the game to English in the Options!
6. Play! :)

1, How to install the mod?
After the download is complete, open it with Winrar (download it from here, if you don't have it: Win-rar.com)
Extract it, then take the Blood in the West folder to:
..../Mount and Blade Warband/Modules/ "here in this folder"
Then start warband, and roll down from 'Native', select mod, and play.

2, What version do I need to play?
Mount and Blade Warband 1.153 or higher

3, About graphic problems
If your computer struggles to deal with the graphics, try to lower it. If anything else beside lag happens, please report.

3, Is it English?
Yes, it is, you can only play in English, otherways you will have Native (vanilla) names, for example, if you're German, and you play in German, you will have Vaegir Soldat instead of Gondor Footman, and so on.
Due to the tendency of Eastern people writing about quite a lot of time, I try to make it clear:

THE MOD IS ONLY PLAYABLE IN ENGLISH!

4, Why do I have Native (vanilla) names for cities, heroes, troops?
See answer at question #3

5, Is it SP and/or MP?
It is only Singleplayer for now, the multiplayer part is messed up a bit.

6, Does it has Middle-Earth map?
Yes it is, tha game is played on a (bit small) map of Middle-Earth

7, Does it has Middle-Earh scenes?
Not all scenes are made yet, only the most important ones (only to be included from FINAL 1.0 version)

8, Some of the animations don't work, what shall I do?
If they're stuck/ you don't like them, then just simply copy the original actions.txt from Native folder to the mod's foldr, and overwrite.

9, Why does the companions complaining about each other, and complaining false things?
Those are the leftover conversations from Native, which haven't benn converted yet. I'm working on them, but it takes a lot of time, and it's somewhat boring to do. The same thing is about that sometimes Orcs, uruks, and special characters are being referred as a Lady...

10, Are there any special Lotr creatues?
Yes, for example Mumakils, Nazgúl fellbeasts, wargs, trolls and ents.

11, About choosing faction at the beginning
Due to the MB Warband limitations, in FINAL 1.0 version, you can start as whatever creature you want, wherever you want, you won't be chased by any realms, and you can visit their locations, which may seem odd, but deal with it.

12, I don't speak English, but I want to help
Thanks, but no, we can't communicate, sorry.

13, I do speak English, but I can't do modding - still, I want to help
Well constructive criticism is always welcome, though not always taken into consideration (for example: Dwarven ram riders - say whatever you want, I'll never include it). Usually I'm stuck to my own ideas.

14, As a commenter (usually using anonymus status) I'm 30+ years old virgin, have pimples, and still living with my parents, and I want to tell you this mod sucks! Haha!
Well in this case your opinion is considered as a butth*le. Both of us have it, but I'm totally not interested in yours. Jokes aside, keep ill manners away!

15, I've noticed that you (ivanhoe95) can't keep your own schelude!
Yes, I'm really sorry about that, but I have many real-life events I have to attend to.

Hi! For all who thought I have abandoned the project, I have good news; I have not :) See below for further info ˇˇˇˇ

Hi everyone! I could use a little help from someone who is skilled and patient enough to make a proper new Easter-European word map OR correct the one...

Hi guys, as the release is getting closer and closer, I decided to open an item balancing thread here. ˇˇˇ

Hi I'm in desperately trying to find a cool helmet pack, but I can't :( Check for info below please!!! ˇˇˇˇˇ

Hi folks, Günther101 approached me in a private message, and gave me these files. This is a fix for the pre-final 0.9 version, made by Günther101. See...

This hopefully fixes the arms merchant's crash. AND: You can buy unique, heroic ancient weapons from the ex-booksellers, they're named Unique Weapon Merchants...

This hopefully fix the elvish problem. The first quickfix has to be installed before this!

Just a little quickfix, install instructions included. If it is bugged, I will upload an other one.

NEXT RELEASE! Playable Dwarves! Fancy axes from Lucas! What else shall I say? All those Hobbit movie fans shall try this! :)

any news about the last version ?

Is there a discord?

Not that I know of.

Why did you add "Spider Riders" In the mod For Mordor? In the Movie they Didn't have them.

because this isn't the movie

This game is awsome hope the face textures for the fellowship will be redone but best M&B warband mod!!

Single Player
Tags
Embed Buttons
Link to Blood in The West by selecting a button and using the embed code provided more...