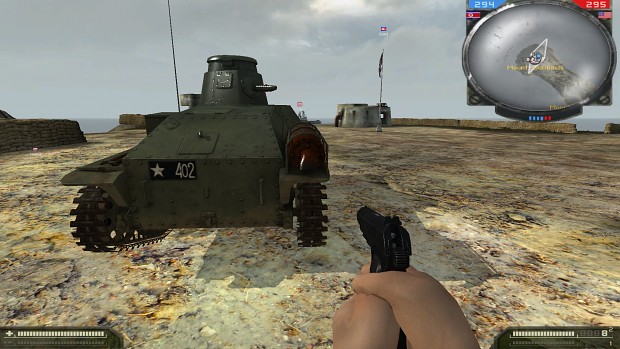 I have a question. Are you going for an arcade-ish FH2 style or pure BF2 playstyle? With the quality of the mod I would love to see it FH2 style ^^

Right now gameplay is closer to FH2, but not as technical as PR. We are debating if our tanks should be driven and controlled by 1 person or more simulation like PR and Red Orchestra or Arma.

Guns feel better than vanilla BF2, so bulletspread isn't so wide as regular. LMG bulletspread is more like in FH2 and PR. Bolt action and semiautomatic rifles can kill with a single well placed shot. We also have realistic recoil and soldier deviation values as well.

Our planes have gravity and weight to them when flying closer to how they feel in FH2. The guy who revamped the planes handling for FH2 helped me to learn how to make them handle more realistic.

So our mod should feel someway in between FH2 and PR.

Awesome, I love that. This mod has this kind of potential due to the quality of every model :D I dont want more arcade mods just like BF2 normal style. Really looking forward to this and keep up the amazing work :D

To me, regular BF2 was unrealistic in the way it was trying to go for realism. LMG's had bad bullet spread for the sake of just making it more difficult. In real life, bullets are more accurate. I believe BF2 made bullet spread too unrealistic. I never did like vanilla guns. Even BF2142 the guns felt way better and accurate.

You can make guns feel more realistically accurate while still giving realistic recoil. This is what is great about Project Reality and Forgotten Hope 2. They keep it realistic yet fun. You can be sure we will be in the same league when it comes to bullet and weapon dynamics.

Awesome then! I cant wait for the mod... :D Can we get a date or at least the period it'll be out?

I can't make any promises, which is why it still shows "TBD", or "To be Determined" on release date. BUT, I want to release by Christmas.

Again... Awesome :D Loving the work you're doing. Keep it up!

The Type 95 Ha-Gō (九五式軽戦車 ハ号 kyūgo-shiki kei-sensha Ha-Gō?) (also known as Ke-Go) was a light tank used by the Imperial Japanese Army in combat operations of the Second Sino-Japanese War, at Nomonhan against the Soviet Union, and in the Second World War. It proved sufficient against infantry, but, like the American M3 Stuart, it was not designed to fight other tanks. Approximately 2,300 units were produced, making it the most numerous Japanese armored fighting vehicle of the time.

Hundreds of the tanks were left behind in China after the Japanese were defeated in WW2.

Thanks to Kraetzer from Forgotten Hope 2's Community Map Pack Pacific theater for letting us use this light tank.