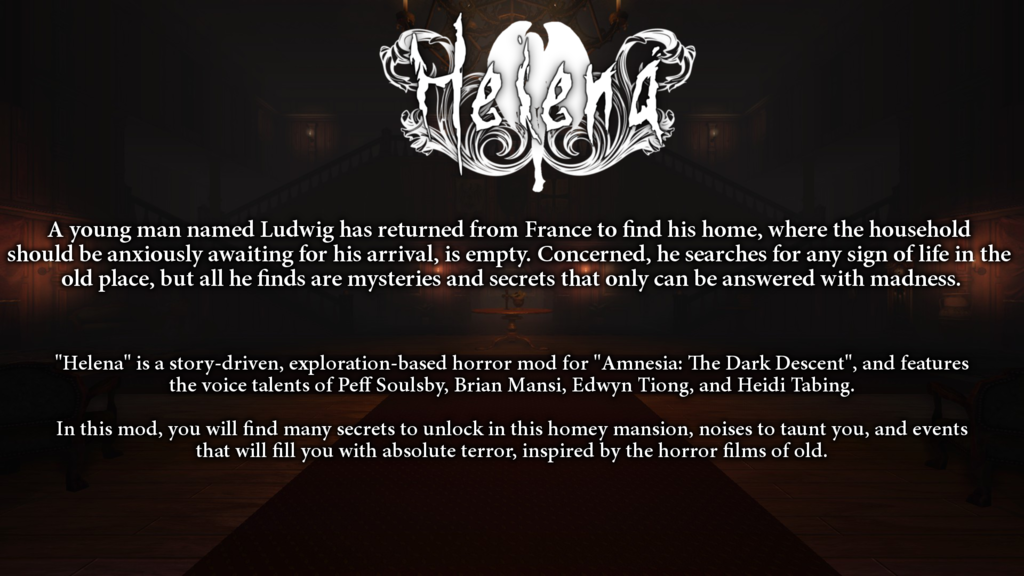 Here is the update I really didn't want to give (and hence why it has taken me a while to get to it): there will be a delay on Helena's release.

None of this means however that Helena is going away for good. I am now just shooting for an August release as opposed to a June/July release.

In the meantime, I'm still working on refining the script for the game: deciding on scenes to be added or trimmed, how best to convey the story, etc.

I do apologize for the delay, as I had greatly hoped it wouldn't happen, but that's just not my luck, I'm afraid.

Anywho, thank you so much for your patience. It is much appreciated.

The Last Phases of Helena

A quick little up-to-date on the status of Helena's development schedule.

What, an update on Helena?! What parallel universe is this?!

Some very important news concerning the development of Helena.

Helena is Not Dead

Just a quick little update about the status of Helena.

PLEASE BE SURE YOU HAVE JUSTINE INSTALLED!! By this point, it'd be really strange if you didn't, but two YouTube series have started, both of which Justine...

2022, still going? Listened to that hearme.wav in The Cage.

Adding this to my favorites. I'll be there to play when it releases (assuming this is still be worked on).

Greetings! So far, how's the development going? I haven't lost hope as of yet, what I've seen in the demo was quite promising!

Translated this demo on russian.I am waiting for the full mod released....

Oh my goodness! Thank you! That's so awesome!

I suppose this is dead in the water

How's it going with this? I hope you can forgive me for frequently pressing about the progress, but this is pretty much the last Amnesia mod I'm still looking forward to after all these years; I'm excited at the idea of it steadily moving along.

It's been a constant stop and start process. Sometimes I feel inspired to work on it and other times too stressed or pressured to work on other things. Fortunately, there really isn't a whole lot more to do on this, so providing I can get my butt back into gear, it should be finished soon-ish.

The Intersection Amnesia: The Dark Descent