The Native Empires will bring new Native and European civilizations to the game. The first installments will feature the legendary Inca Empire and the adamant Kingdom of Sweden.

New maps will breathe new life into the game with more than a dozen African maps with unique features and minor native civs, as well as new maps in Asia and South America.

The mod will also feature an impressive amount of new minor civs to ally. Each will have a unique unit and stunning new architecture, as well as balanced native lore techs. They can be found on the new maps as well as some of the old ones, and include tribes in Africa, monasteries and fractions in Japan and Korea, nomads of the Mongolian steppe and indigenous peoples of Latin America.

Formerly Refined Edition, this modification keeps faithful to the paradigm of keeping the game balanced and close to the original in its feel.

You can check the news here and on the Discord channel.

A look at the new random map for the mod - Rhodesia. 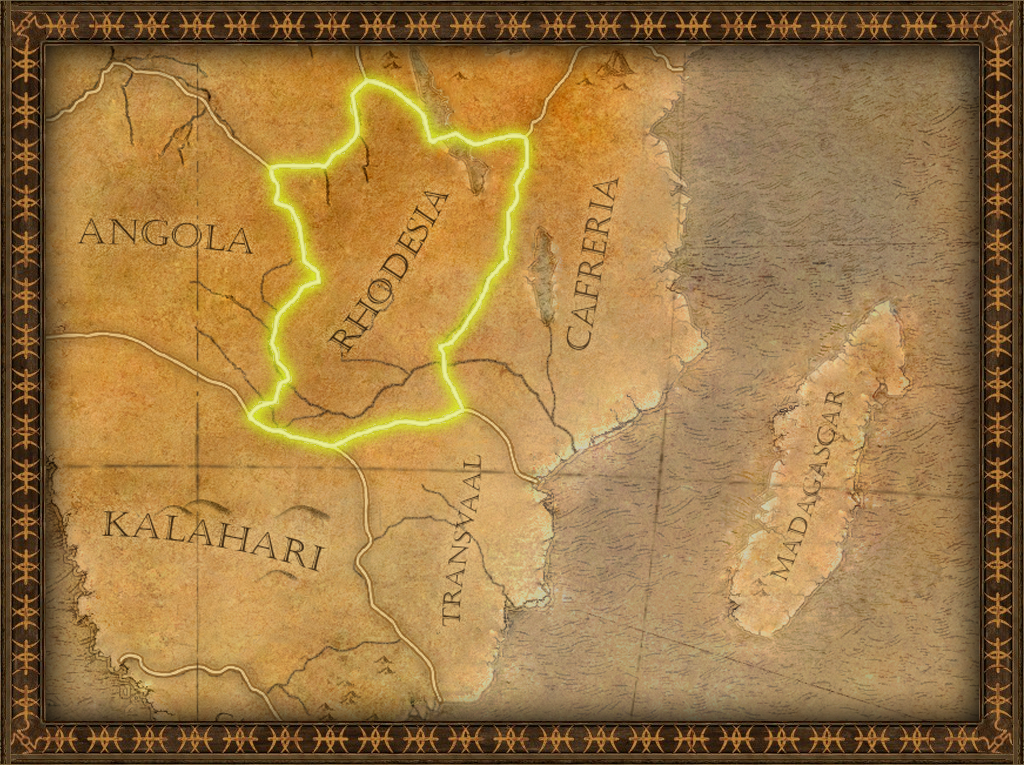 Rhodesia is the name that traditionally referred to a region in southern Africa that is now covered by the country of Zimbabwe. During the game period the area presented by the random map was home to the Kingdom of Mutapa, but it has been found out to be inhabited by people since the beginning of human history. The region is also known for the Zambezi river and Victoria Falls. 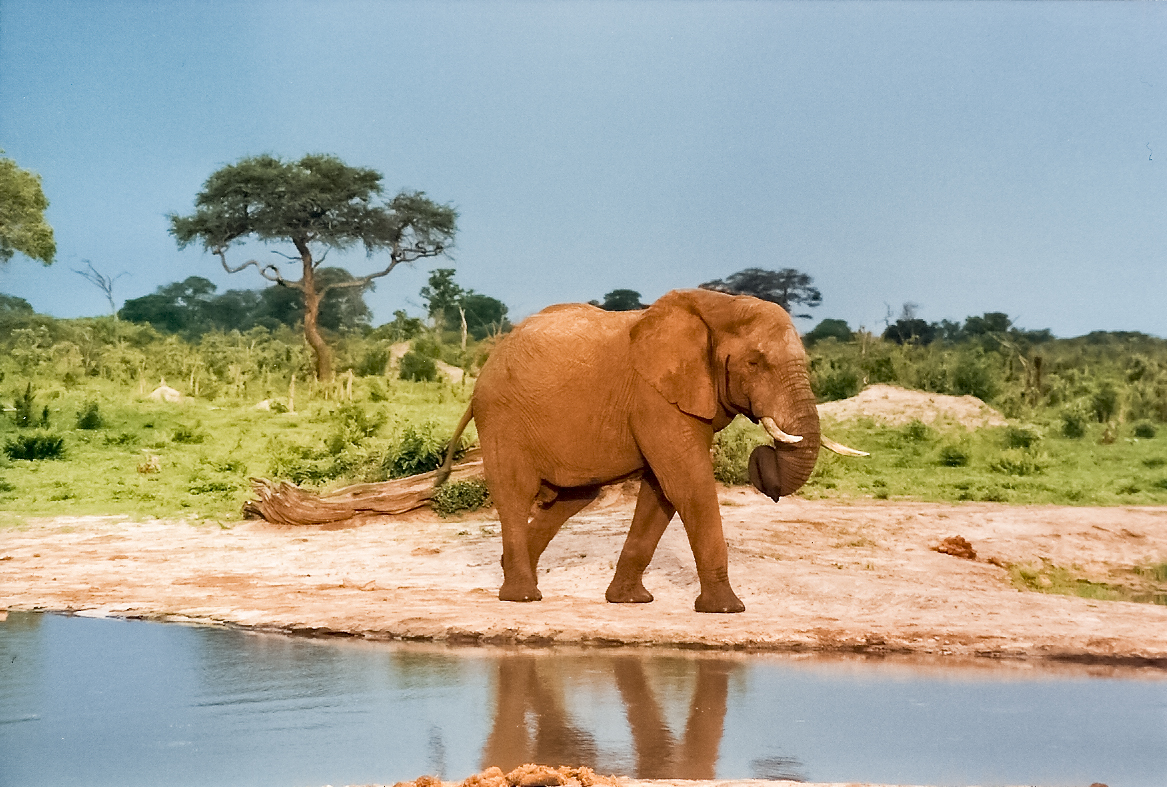 Rhodesia is a rather complicated map. In a team game the players start in the northeastern and northwestern parts of this large map. They are separated in the North by a part of the elongated Lake Tanganyika, and a trade route circumflexes it. The shallow yet wide Zambezi river takes a large portion of the South. Two Bantu villages can be found near the river; two more villages are placed in the North for 7-8 player games. 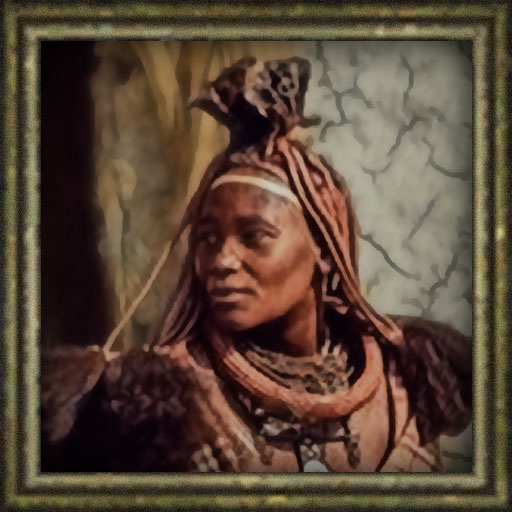 In the center there is a large empty plateau, and two minor cliffs neighbor the lake in the North if only 2 players are present. Two small ponds are placed on the opposite sides of the central canyon - in the East and in the West. 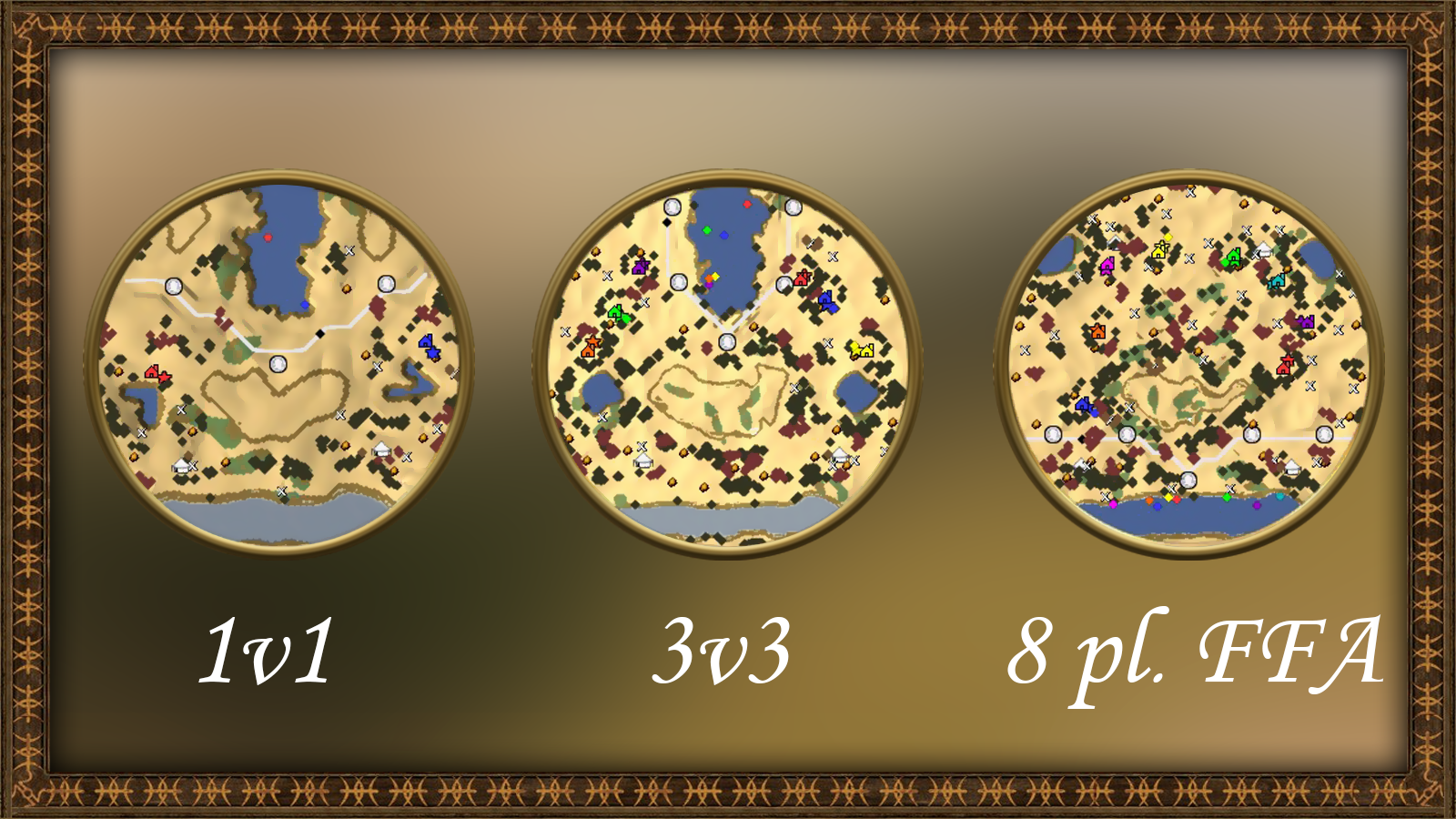 FFA configuration is quite different. The river becomes navigable, the lake is absent, the ponds move to the North. Moreover, the trade route follows the river in the South. The players are placed in an arc, surrounding the plateau.

A brand new terrain set was created for the map. It features a semi-sandy, semi-grassy ground texture, a suited cliff type, two types of forests and a number of beautiful grass patches. It aims to replicate the distinguished African savannah. 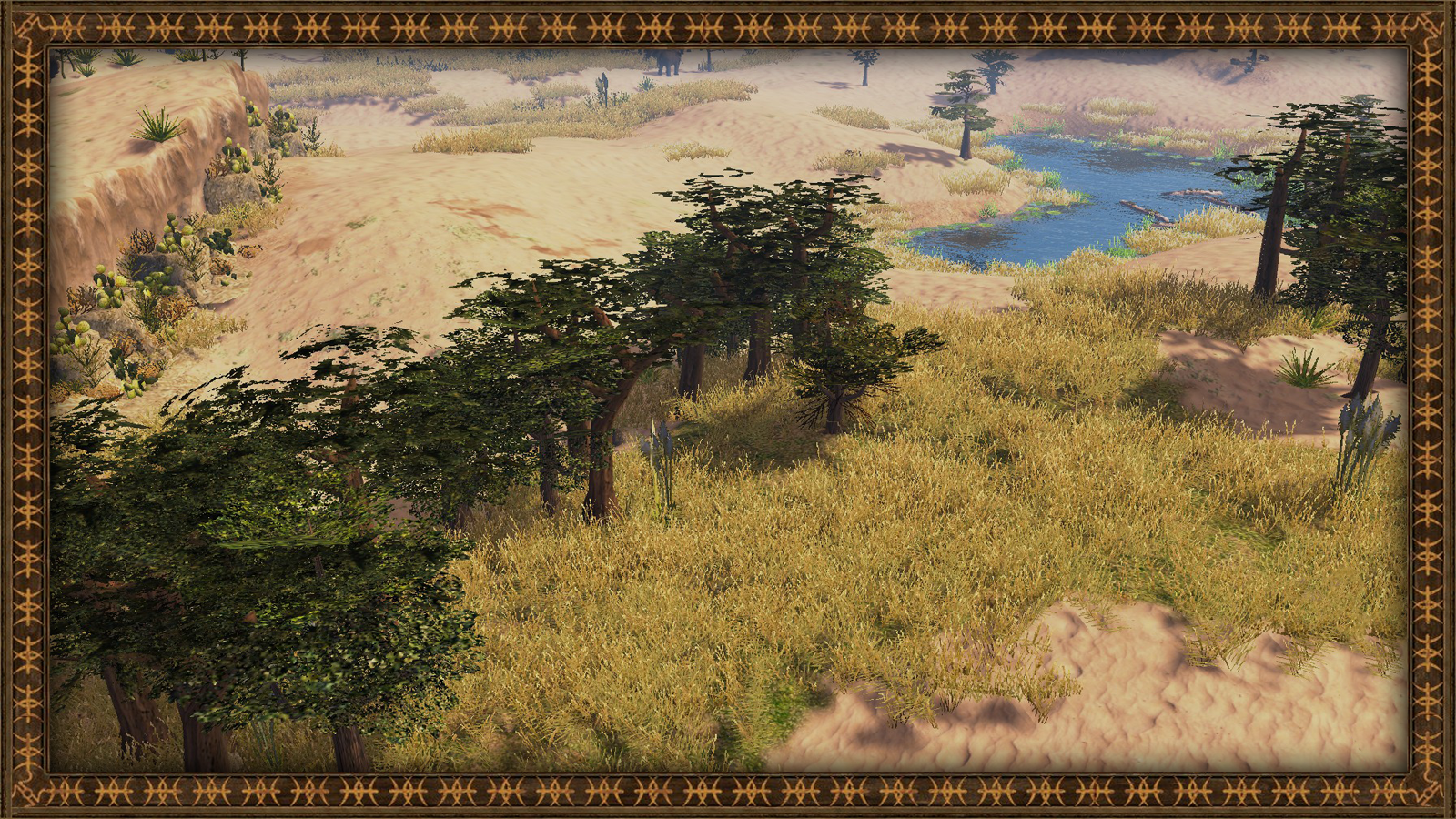 New animals are featured in this African environment as well. They are the Wildebeest, Impala and the already present Elephant.

African huts made for the Bantu peoples villages have models based on those created by WyteRaven for his mod. Check him out for more similar content. 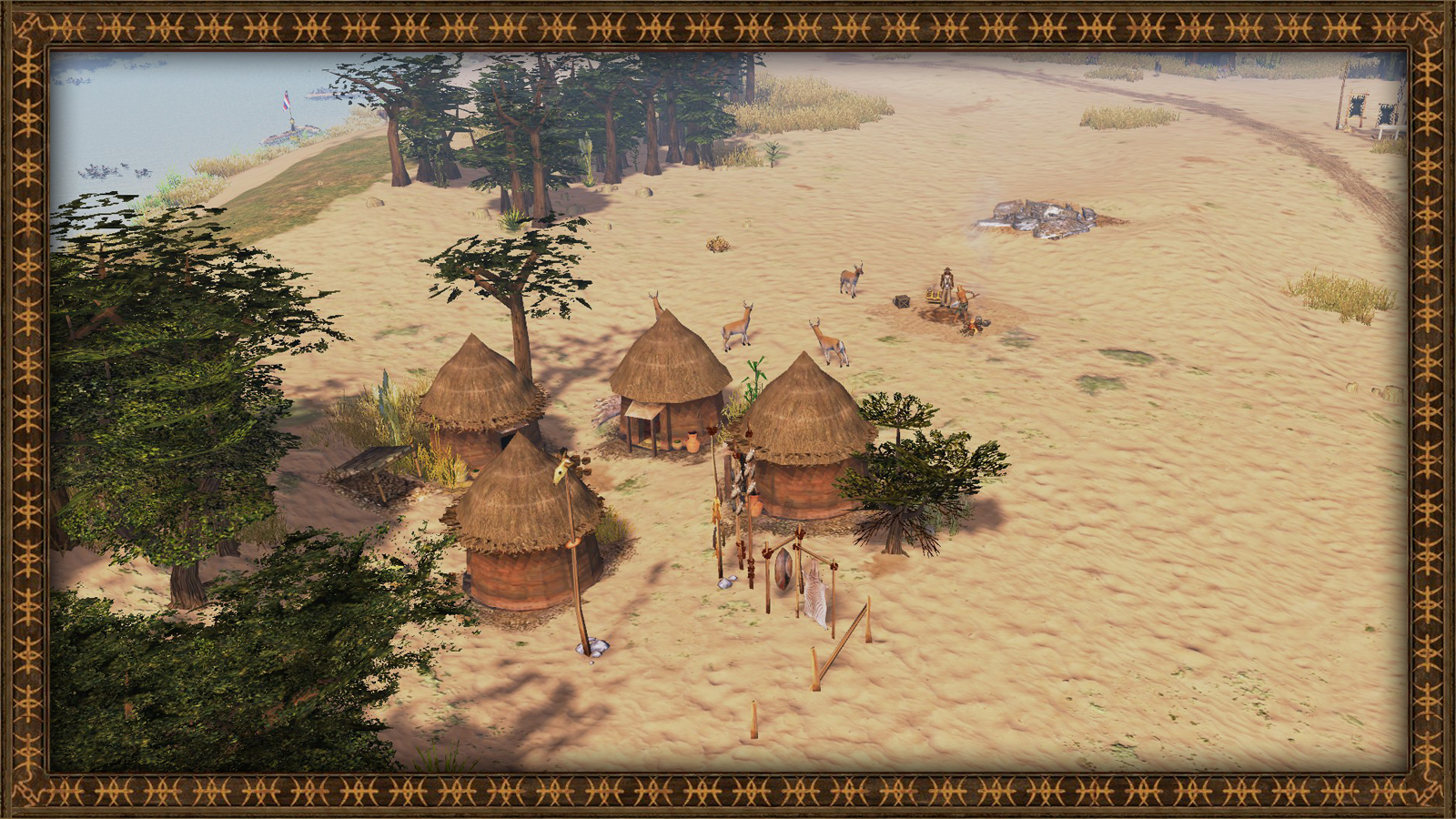 Each player starts with one nearby huntable herd of 5-7 Elephants. Other numerous but small herds of Wildebeest (Gnu antelope) and Impala are scattered all around the map. They have 450 and 350 food per animal respectively. 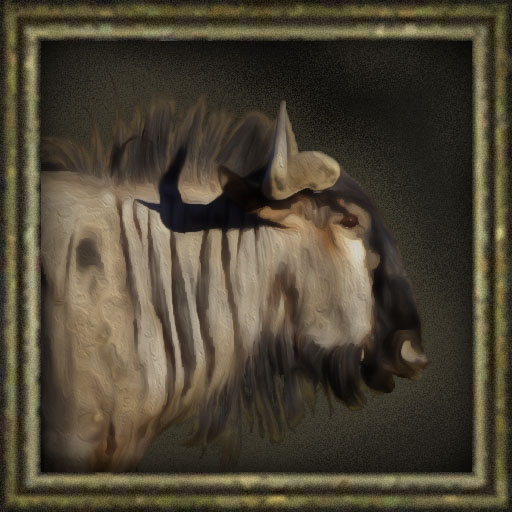 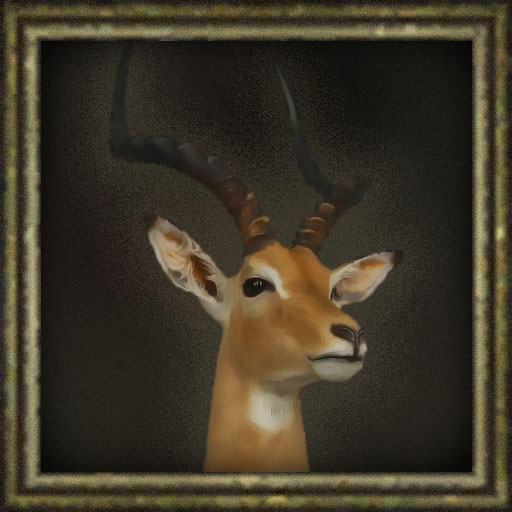 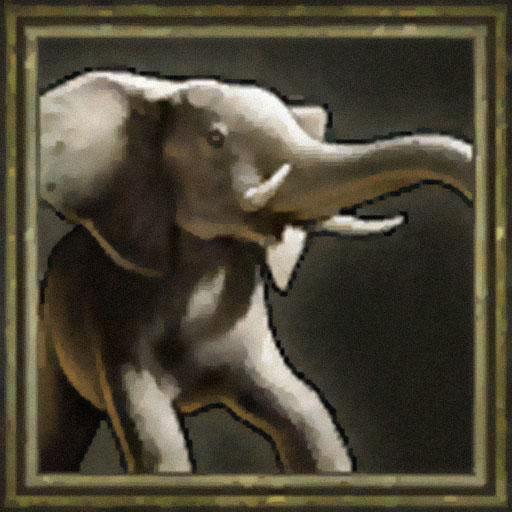 There are no fish or berries, but with plentiful huntables there is no need in either. Overall there is no shortage of food, but the animal amount is not over the top.

There is a decent number of forests, but they are in the proximity of water, especially the Zambezi river. During the game the players will have to gradually venture further from their colonies to find trees, but there is an adequate amount of them.

Each player starts with one Tin Ore Mine. It will run out rather quickly, and one will have to find some of the Silver Mines, which are mostly in the vicinity of the starting player areas though. There are no whales, obviously. Thus, coin might become a problem, even in the early stages of the game.

Rhodesia is an unusual map to play because of the many geographical features it has and the resources it offers. It has large water bodies yet no fish, a fully passable river region devoid of any resources, a blocked middle of the map.

The region between the plateau and the lake may be the most crucial place in battle, as it is the major route to the other team and has a trade route site. Other trading post sites are relatively defendable. 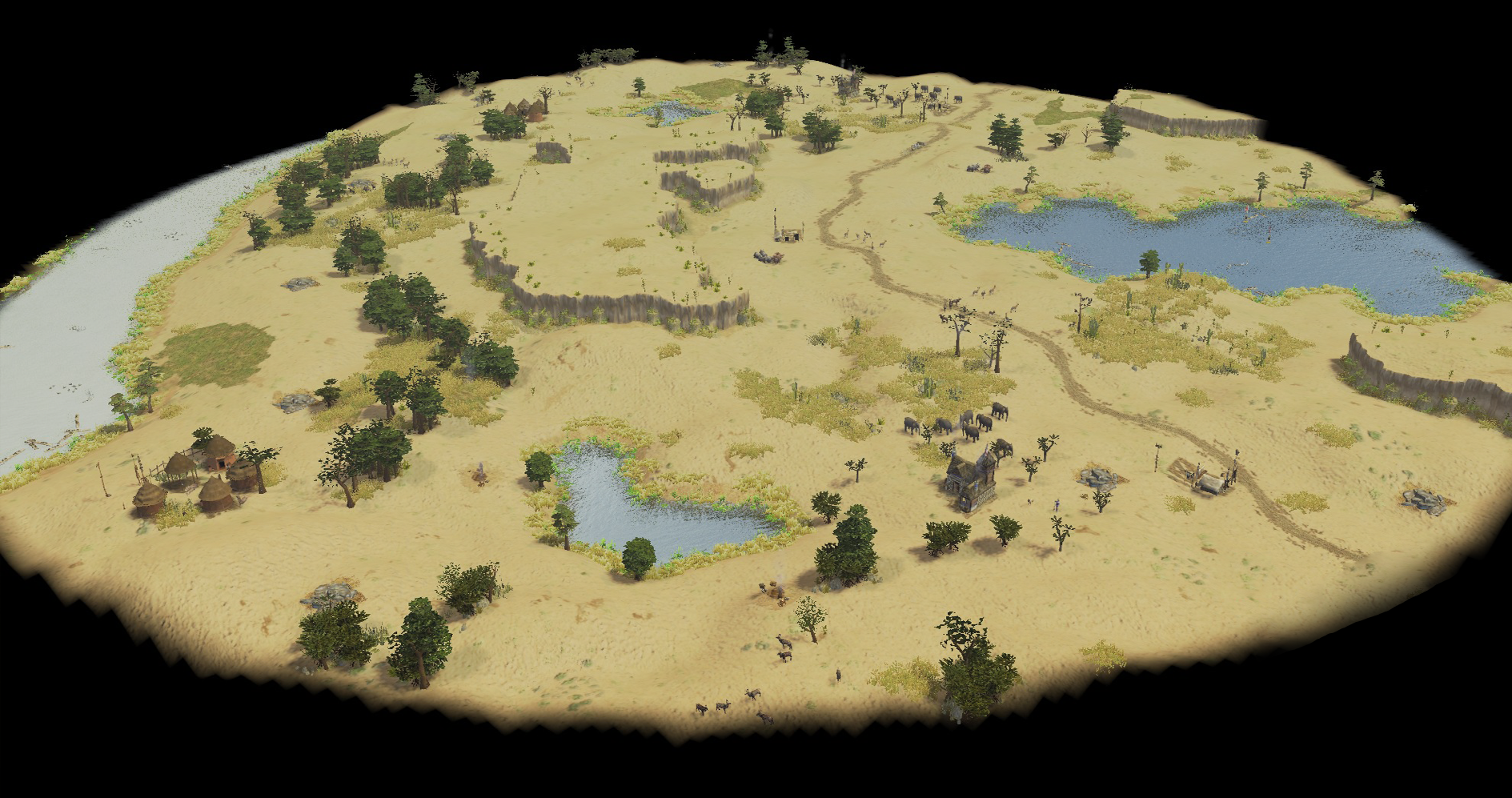 The resources are balanced, although Dutch and Japanese civilization players may find it difficult to find enough coin and food respectively. Level resource distribution and corners created by cliffs and lakes result in a huge raiding potential. The base is neither open nor easily defendable, and there are basically two possible attacking directions.

Playing this map can resemble playing some of the ESOC maps because of its scattered resources, symmetric geography and unusual minor features, creating chokepoints. It is open to many possible strategies, and might be of some interest to the more skilled players.

Feel free to comment your thoughts and watch the mod - more map reviews and other news are yet to come!

The Black River map showcase: an in-depth look at the new random map, featured in the mod.

Cape of Good Hope map showcase: an in-depth look at the new random map, featured in the mod.

Nile map showcase: an in-depth look at the Nile random map, featured in the mod.

Unknown custom map with incredible variety and fixed issues of the standard map.

I redid my N3O AI script, releasing a Gold Version:

I added the ability to build extra Town Centers in Age 3. I also increased the fishing boats to 20 maximum. This AI does not build many mercenaries, as it trains 3 unit types.

Just as a reference because this AI builds native warriors and mercenaries in addition to its core units and some artillery.

It's a long project, but I feel that the major thing is that the AI should be able to play each civilization with at least 1 upgraded unit.

There is also a switch opp type for raiding that I have high in my AI which is not good for rush games in team matches, but is rather better for the computer getting good results for raiding in long treaty matches (they go for wood cutters, forward base villagers).

The last thing I did with these two AIs is Bias Inf and Bias Cav for a trouble team like Japan. In these AI scripts Japan is playable unlike original N3O FP AI. I combined 0.99 unitpicker for Samurai and Naginata with 1.0 bias inf and 0.5 bias cav. The AI will try to train units that beat villagers, and units the are good vs buildings.

Please feel free to experiment with any of the features from these AI scripts.

My scripts are wall building AIs and are based on the Draugur Script.

Hey!
Good job on the AI!
The thing is, adapting an AI for a mod, while not exactly difficult, is tedious. Right now my mod uses modified Draugur's AI. If you are positive your version is stronger and more entertaining, contact me here or on Discord, and I'll try it out with my mod. But, sadly, even if it is better it might not be worth focusing effort on redoing my mod's AI considering it is alright already.

lonely, I'm mister lonely, there´s nobody but my own...

It's quiet here, but the work is ongoing!

Concerning revolutions; do you think adding unique units and cards is possible?
There are some interesting ideas in the changelog for Definitive Edition on AoE website, or on some channels on YT, such as AceStriker that hold a compilation of interesting ideas, such as Adding Romania, Hungary, Indonesia, Haiti, Egypt or Canada, which would be a nice way of representing those nations. They also changed and added some units, and most of revolutionary civs had the options to reactivate the production of settlers as 'citizens'. I know it's a 'bit' much, but would you care to look into it? It would make this already great looking mod even better, if it's possible of course

On units, a Polish Kosciuszko revolution will turn settlers into Scythemen rather than militia. I don't think revolutions should keep the availability of settlers. As to all those nations, I'm afraid it's too much, especially considering the mod's theme. But I'll look into the suggestions.

Understandable, but thanks nonetheless. And by the way, when can we expect the mod? I'm quite eager to play this piece of splendid work (:

I can't tell really. I've had some technical difficulties lately, so it's being delayed even more unfortunately.

Ah, I see. Still, we'll wait, so take your time
Thanks for your work (:

Thank you for awesome job when will release this mod ?

Thank you, no idea lol

Struggle of Indonesia Age of Empires III: The Asian Dynasties

Fall of Civilizations Age of Empires III: The Asian Dynasties