Napoleonic Era is a renowned, fan-made modification for Age of Empires 3 and its expansions The Warchiefs and The Asian Dynasties. The mod intends to accurately illustrate the time from 1555-1815 by greatly expanding and reworking the game with new units, buildings, maps, sounds, music and civilizations. The mod has been founded in January 2006 by Alexander Fleger and is being continued by Peter Piepenburg since February 2010. It is still one of the most anticipated mods for Age of Empires III in the whole world.

it's just been a week since the last release of NE 2.1.7, which provided Mac users for the first time with an installer and did rebalance and update a couple of civs too (i.e. the Germans). Due to a major visual bug (caused by bad file packing) we decided to quickly re-release a fixed version (and not a patch).

NE 2.1.7b will stabilize the recently released NE 2.1.7. Apart from fixing the major visual bug, this version also adds a new voice set for Polish and some new graphics for Americans, which you can see here: 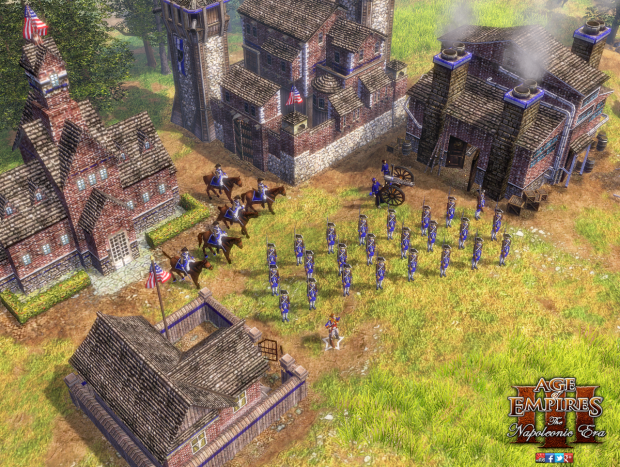 Installation requirements:
NE 2.1.7b requires the latest AoE3 patches, but no prior NE installations.
You can install NE 2.1.7b over your NE if you did not install versions earlier than NE 2.1.6.
Otherwise please install NE over an umodded and patched AoE3.

NE ONLINE GAMING
If you want to play against other NE players, you can join this NE Online Group on Facebook and ask for matches. NE has been played so far via GameRanger, Hamachi and ESO.

And now we will crawl back into our Skype chatrooms, working documents and surround us with code, sketches and graphics and prepare the next big thing. ;)

Today should be a good day for everybody, because today is the release for NE 2.1.7 for PC & Mac! We're particularly happy to present our Mac fans the...

We're very happy to present you the new NE installer (NE 2.1.6) today! I'd really call it one of the most beautiful installers that I've ever seen. Since...

Hey everybody! I'm coming with good news: The new NE installer with all prior NE patches and new updates will be released this week!

That's right kids. I decided to start a lil Social Media campaign for Napoleonic Era, we got Facebook and Twitter now. Can't wait for your blabla! ;)

This patch for Napoleonic Era 2.1.7b for PC allows you to play versus the old AoE3 civilizations and create HCs for them. This hotfix needs to be installed...

This is a full version of Napoleonic Era for PC and will keep your native language settings and only add text for new or reworked content in English...

This is a full version of Napoleonic Era for Mac and will keep your native language settings and only add text for new or reworked content in English...

A large mod that adds nine new civilizations. This demo version allows you to play three.

well, the page is down. So is this mod dead?

we need this mod.

hello, sorry this mod is no longer updated

Hello, is there a way i can use napoleonic era with unleashed ?

hello, there is someone maybe the admin which can give the access to the 2,2 version of this great mod? :D im pretty sure there is somewhereee

Can you change the standard thin wall into Fortified Wall like in the Campaign , they can be change through downloadable mods when you play vanilla game also you can change their hit points and resistantance so they can't be easily destroyed like they made of cardboard box through protoy for TA, proton for NE , I hope this is not a dead mod

I must say this is the best mod for Age of Empires III! Words are not enough to describe the amazing work TilanusCommodor and his team put into this. Good show old chaps!

Age of Dynasties Age of Empires III: The Asian Dynasties