Hundred Days is a total conversion mod for Age of Empires III - The Asian Dynasties. Its aim is to offer a new innovative gameplay taking place during the napoleonic wars.
As such, in Hundred Days, players battle from the year 1789 and the turmoil of French revolution to the year 1815 and the battle of Waterloo.

You can download the mod's files from the latest github release or from the download section of this mod's page.

To install the mod, please refer to the wiki's Installation Notes.

11 nations are available for the time being (note that the United Provinces are not completely finished).

Hundred Days is a total conversion mod and contains a lot of mechanisms that may seem far from the original game. It is advised to visit the wiki to browse the mod's full documentation and understand how everything works.

If something seems unclear, please visit the FAQ & troubleshooting section of the wiki to see if your problem is not already known.
If you find any bugs or if your problem remains unsolved, feel free to file an issue on this repository so we can fix it together.

The intention of this mod is not and never will be to earn money and is offered freely to everyone. This said, the following things have to be clearly stated:

I would like to share with you some screenshots taken during a 1v1 multiplayer battle opposing the French empire against the Russian one.

The French player chose the Imperial guard tactic, giving him access to elite unites in a quasi age VI. He therefore had under its command grognards, chasseurs à cheval de la garde and other elite lancers.

The Russian player, on the other hand, chose the elite regiment tactic in order to be able to deploy the mighty Preobrazhensky line infantry, Pavlovski grenadiers and a powerful cossack guard. 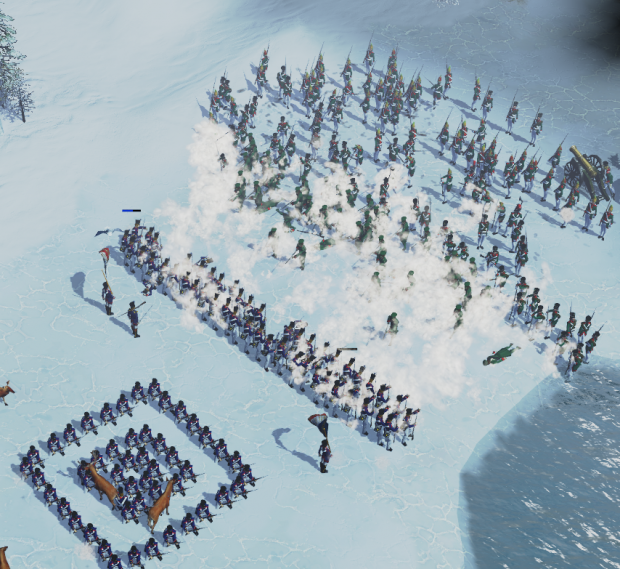 You can see on this screenshot the beginning of the first skirmish opposing both players.

The fact that the French line was assisted by a full staff of flag bearers and one officer was clearly a fine advantage when first shots were fired. Maybe the French army, even less numerous, could have survived the encounter... 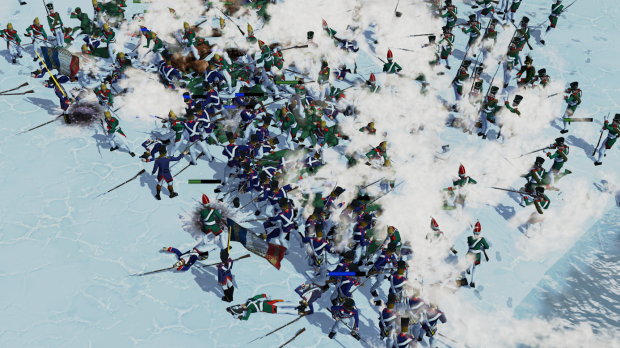 However, French troops were not able to win this fight and were quickly submerged by fierce Russian grenadiers charging with their bayonets.

The second encounter was less fortunate for the Russian army, flanked by French hussars and harassed by accurate volleys from two line infantry regiments. 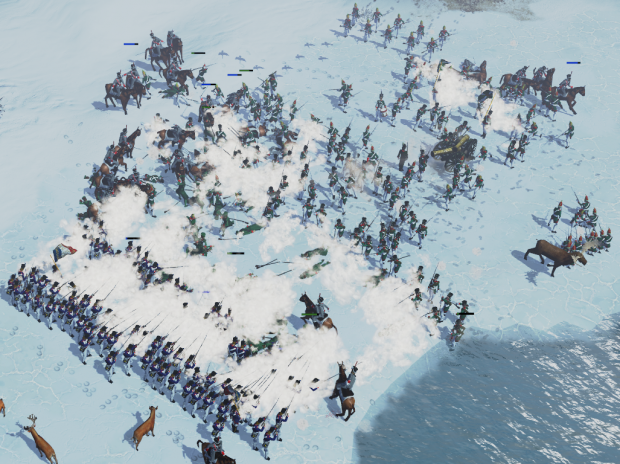 The French player could then fall back to its base to heal its line infantry soldiers and train two regiments of chasseurs of the imperial guard, capable of deadly shots from afar. 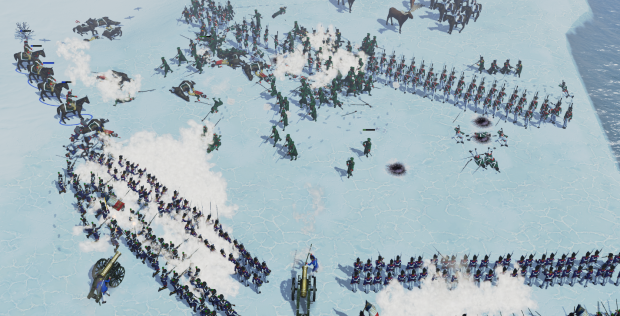 The Russian player, wanting to eradicate the French menace, charged with an opolochenye cannon fodder regiment so he could advance more carefully his Preobrazhensky elite infantry towards the enemy.

The opolechenye while dying quickly, still succeeded in buying some time for the Russian player to position its light infantry and Lithuanian elite skirmishers so they could respond to the French chasseurs shots. 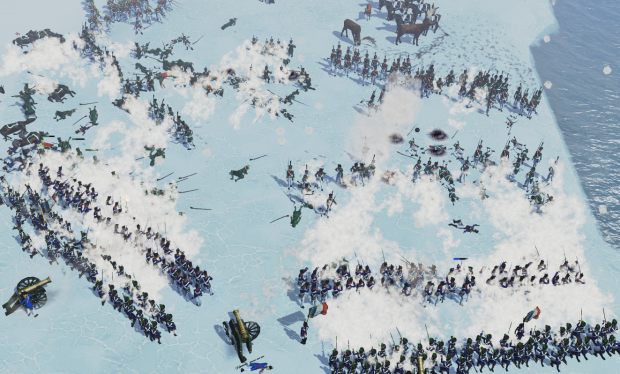 But, in the end, it seems that the frontal Russian charge did not pay off and lead to a mitigated French victory.

To be sure that the fourth encounter would not lead to such gruesome casualties again, the French player decided to resort to a full array of its imperial guard units, while backing its infantry with more powerful artillery.

Here, you can see a French battle camp guarded by two groups of Imperial guard dragoons and a regiment of grognards, the best grenadiers of the mod. 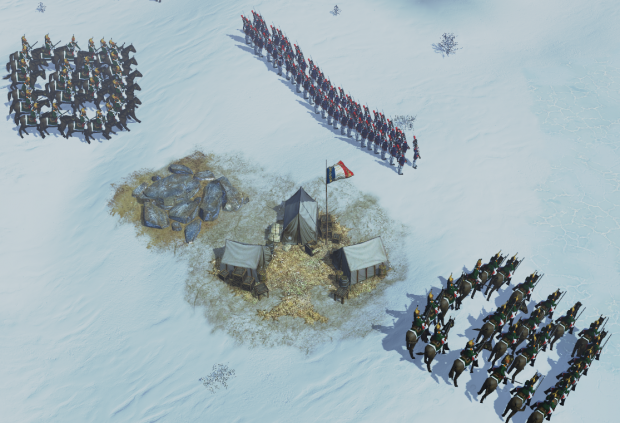 The battle began and the French army started very well by decimating Russian line infantry. The French player then decided to charge full front with its Polish lancer regiment to claim an easy victory. In the meantime his infantry advanced a bit more to bring havoc to the Russian's base. 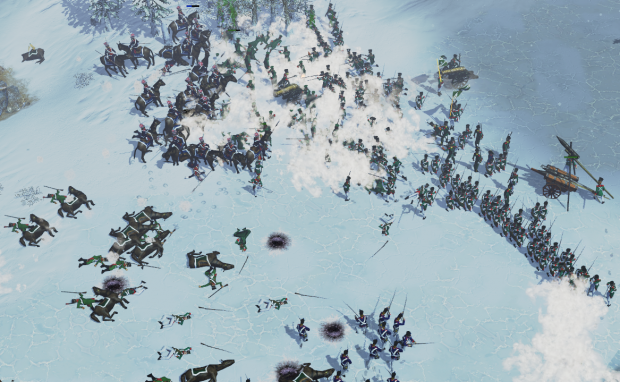 But nothing is that easy and the French player quickly found out that the Russian feeble regiments were just a decoy when a huge group of hussars charged from the forest and toward his lancers to kill them all.

The Russian player then commanded its infantry to march towards the French base to eradicate the enemy remaining units. 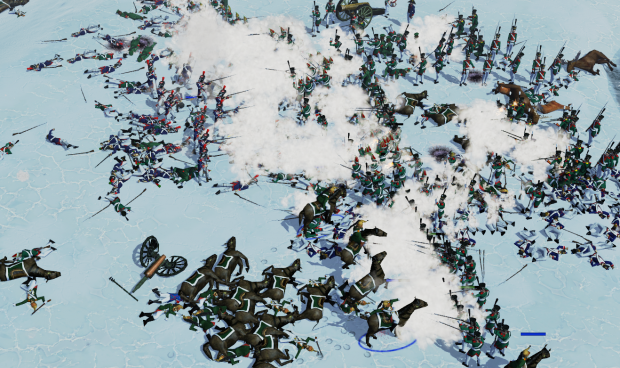 You can see here the French grognards and imperial dragoons holding the last line of the French army before its final defeat.

Congratulations to the Russian player for claiming this victory against the French imperial guard!
See you soon for the next battle report: 2v2, Austrians and British vs. Russians and French.

This a better version of the default AI by the mod.

First beta release of the mod. Intallation notes can be found in the archive as well as on the github wiki pages.

come on guys this mod is awesome, but how can be so idiot the AI? even at hardest difficulty AI only make stand troops, line infrantry lol... no cavalry nothing more

have you tried updating it with the 'Improved HD AI' update?

HELLO again I need some help please. I installed the mod as is written, game start without problems, but.. First: impossible to change resolution and set anti aliasing (everytime i put different res it always set 800x600 in auto) Second: i try skirmish, selet a country and the button Play is not working... so meh... whats going on ??

goodmorning, as a big fun of napoleonic wars period I decided to unistall Wars of liberty mod to put this one, im downloading it now, after i discovered this i was like... omg... but i can see last update is quite old... noone continued this mod? any news?

This is a great Mod, my congratulations for the team. Forgive me if I'm bothering with the question, but would there be any way to use for example line infantry hats in the vanilla musketeer?

Is this mod still alive ?

Struggle of Indonesia Age of Empires III: The Asian Dynasties