Earth's final descent into Armageddon has begun. Extreme weather violently spreads destruction, death, and a twisted virus across most of the planet. Survivors band together to take what the weak have and fend off the deranged infected. In this decaying world, it's going to take everything you have to survive the wrath of mother nature.

-Use quick thinking and agility to avoid whatever nature throws at you. Get animated in order to dodge flying, floating, and rolling debris.

-Master your firearm performance though trial and error to make the most with what you have in each scenario.

-Special abilities such as slow time, sprint, and night vision can make a difference in harsh conditions.

RUSH: Travel on foot to the rendezvous location for evacuation. Make the most of your limited support and equipment to push through the infected to your objective.

ARCADE: Use trial and error to maximize the potential of your weapon and special abilities. Outlast extreme weather while fending off infected ambushes.

HOLDOUT: Hold your ground against the infected in a classic horde style mode. Use ranged weapons to pick them off from a distance, or just blow them up with a home-made firework launcher.

SHOOTOUT: (Coming 0.2 or earlier) Fight off enemy scavengers and survivors in intense firefights. Use cover while it lasts and the slow time ability to survive an endless hail of bullets.

ARENA: (Coming 0.4) Utilize melee combat and anything from throwing bricks to jabbing with a jackhammer. Use the mode exclusive health regeneration ability to outlast the enemy.

Going to start with the good stuff, bayonets... and infected wearing VR headsets.

These tools are in the game now and the majority of weapons have them equipped. This is the first round for them. Bayonets do need some TLC still and your input on them will help greatly.
Current Drawbacks:
- They rely on 85-95 FPS to function properly, working on a fix for both high and low end PCs. Released a quick patch for high end PCs (120+FPS) yesterday, however it is yet to be properly tested.

Slow-time is now triggered when you are aiming at an enemy within 20 feet / 6 meters.
This only works if you have both hands on the weapon, the new tutorial will cover this.
Initial test reactions to this are positive, however I'd like to hear what you think about this change and what could be done to improve it.

Here's the meat, a road-map for the rest of early access, we'll get to the patch notes right after. 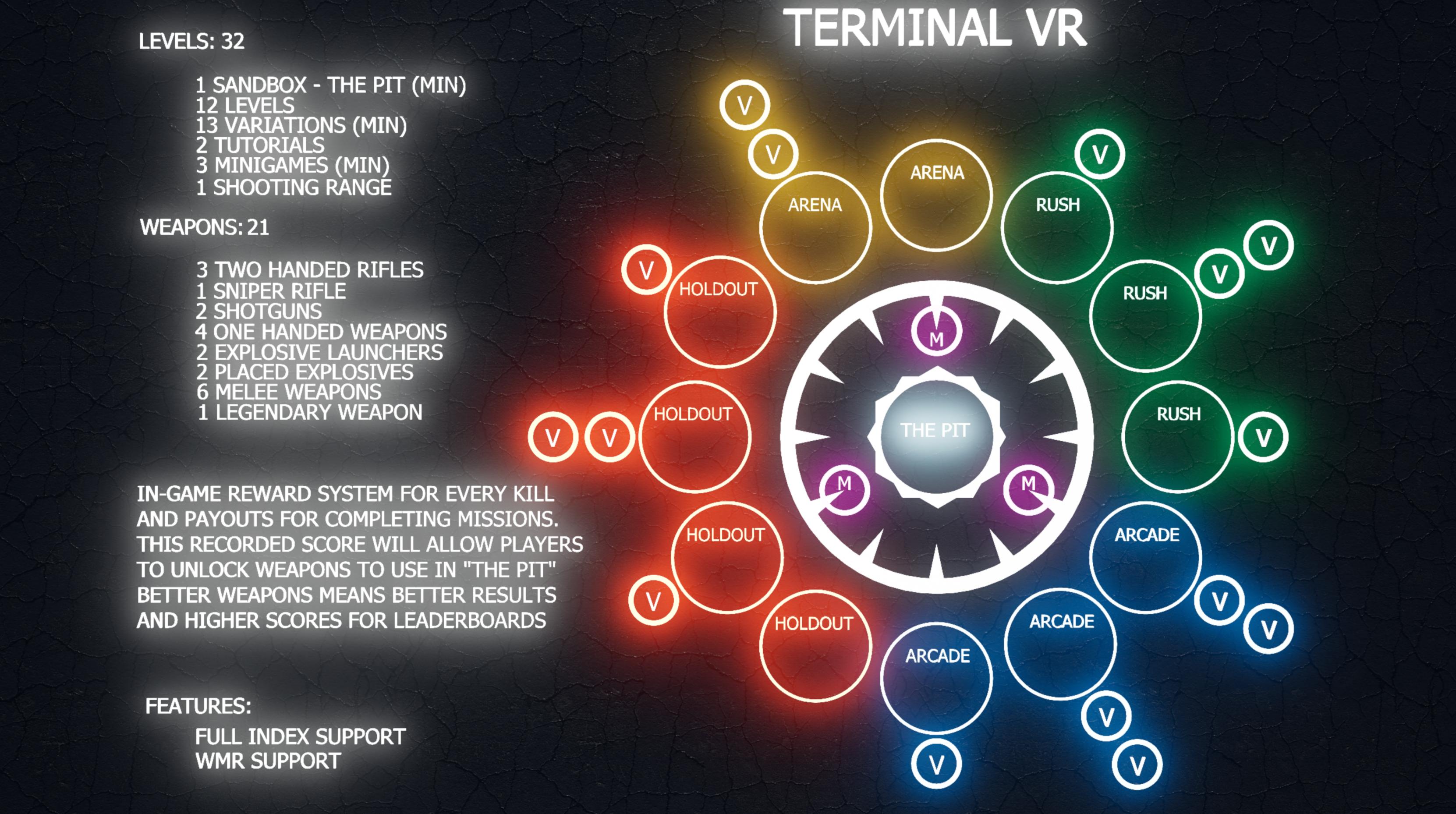 The Pit is going to be the culminating event in Terminal VR. Every kill and mission completed will be recorded and contribute to the player's chances in The Pit. Players will earn points through actions in every other mode, these points will be used to unlock their favorite weapons there. The map will be of medium size. It will feature combat against the infected, raiders, and extreme weather. Yes, this is a change to the original roadmap. In theory, it will benefit Terminal VR greatly in terms of fun and replayability.

PLANNED VARIATIONS EXPLAINED: (Preview for a planned variation for the Marksman Mission - Raiders)

As you can see, it takes place in the same format as the original level. The difference in most cases is the levels themselves will have been drastically altered by nature. The water has risen 50 feet / 15 meters and has frozen over. The two sealed tunnels in the original mission will be opened up. The player will no longer have the high ground advantage and raiders will have the wrecked ship to use as cover. Many other missions will follow this trend with the exception of Arcade Mode variations.

PLANNED WEAPONS EXPLAINED: Originally, the plan was to bloat the game with a ton of weapons. It wasn't making sense and started turning into a time pit that was negatively impacting development. All weapons in Terminal VR will be different from each other to some degree (e.g Terminal VR is the type of game that does not need three M4 Variations). This will give weapons more of an identity when choosing what works best in The Pit.

PLANNED GAMEPLAY SUMMARIZED: Changing Terminal VR from a mission gallery into a single objective. Reward players with a saved score that they can utilize. Encourage and provide incentive for exploring different missions, while figuring out which weapons will help them the most in The Pit.

- New Variation for Sandstorm, fight the raiders during the storm as an option
- New Advanced Tutorial level covering weapon handling and more
- Shootout training altered and now is in the holdout section
- Changes to incoming enemy bullets and arcade dodging mechanic, much more polished
- All arcade modes optimized further
- Recoil between stabilized and one-handed improved but still a work in progress
- AK remodel + new 95 round magazine added (Shield will be added soon in absence of a bayonet)
- M4 remodeled for bayonet
- M-14 remodeled + bayonet
- Bolt-Action remodeled + bayonet
- Belt-Fed 12 Shotgun remodeled specifically for bayonet
- Pistol, new rusted textures
- Adjustments made to Desert Doogal textures and model
- All AI changed to have more similar functionality
- Player menu revamped for Free Rotation (move both bars left)
With saving... more work must be done but if you ensure both bars are fully left it will work.
- Player status bar updated and optimized
- Health Regeneration speed increased, removed excess decimals on counter.
- Radiation and temperature counter added to player hub, not yet integrated.
- Optimizations to holster system for dual weapons
- Firework launcher map optimized further, less physics objects
- Rush Evac: Optimized
- Loot: Mags added to Rush: Evac + handgun as well per player request
- Loot: Limited ammo and a handgun located in Holdout: Marksman
- Major weapon dropping changes, no physics. Weapons will be stored in the exact location you left them. A box will spawn below to help locate the weapon, however the icon is used for retrieval.
- Left handed visual support for for weapons
(firework launcher is not yet utilizing this, will be fixed soon)

Known issues:
- Index usage is improved however not enough to label it as fully supported.
- Index requires some extra effort to release weapons from hands, working to fix asap.
- Raider death audio bugged
- Some players are experiencing blank screens in the first tutorial mission, working to fix asap.
- Both free rotation slider bars are functional if used properly, however not very intuitive currently.

There is still a lot to be done and some VR jank lurking around that needs to be eradicated. Big thanks so far to fbousk, collindrennen, Space Friend and Tricks-or-Treats for in-depth feedback, Index testing, and more. Feedback is always heard and some suggestions have already been integrated into the game.

CONTENT IN DEVELOPMENT: (Preview, these are not in the game yet)

Dusty: This is a special infected that was promised a while back and is late. Uses a fire extinguisher to cover his advance and other infected. 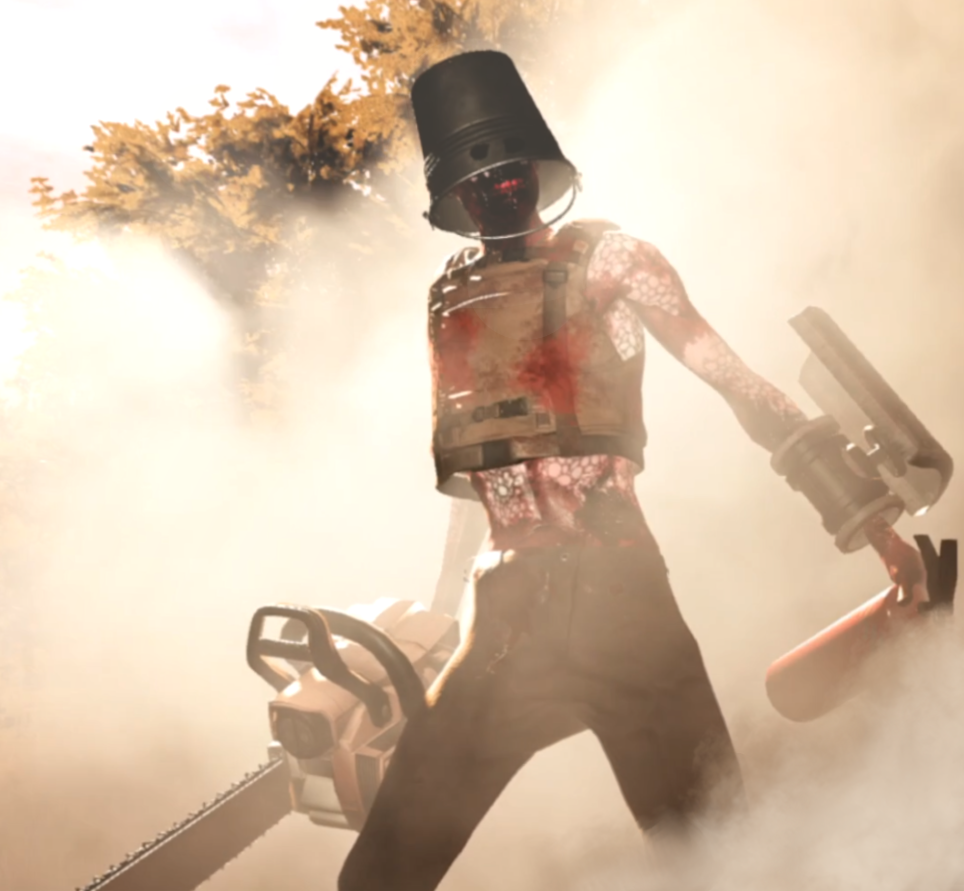 If you want to use the melee weapon again the player will have to tug the weapon to dislodge the blades. Different melee weapons will have different thresholds and weight.

This update was extra time consuming, hopefully be able to get back to reasonably timed updates now.

Raiders Are Coming, They Need Places to Raid!

A quick write up and some pictures showing what's coming soon to Terminal.