2 Hour Day and Night cycle: 1 hour of daylight and 1 hour of night. Skill progression system: For example, a skill like Fighting can be improved through combat with melee weapons like a baseball bat or a crowbar. Play as a community struggling to survive. If your community has more than one person, you will switch to another community member when you die. Recruit Survivors that have unique sets of skills. Some survivors are expert gardeners, firearms experts, or chefs for example. Variety of zombies: Some zombies move slowly, others run fairly fast. There are also unique zombies that have yet to be revealed. Randomly generated missions like rescuing a survivor, scavenger hunts, or killing zombies. Randomly generated contents of containers in buildings you search. Once you take an item from a container that container will never spawn additional items. A wide selection of ground vehicles to drive.
The ability to claim any building with a fence, wall, or similar structure surrounding it as your base for your community and additional buildings as outposts. With your base you can allocate exterior spaces as workshops, barracks, gardens, watchtowers, or some other announced facilities. Interior base spaces can be allocated for use as kitchens or some other unannounced facilities.

Lifeline DLC - What is it?

State of Decay: Lifeline drops you into an infested city with a mission to locate key scientists and other valuable civilians, and airlift them to safety.

Your first assignment brings you to an abandoned strip mall on the edge of town. Its empty parking lot has plenty of room to land a helo. Its position next to the highway gives you access to neighborhoods all over the city. And its eight-foot barbed-wire fence gives you a small measure of security. It’s the perfect place to establish your base of operations.

The soldiers in your unit start calling the place Black Friday, because of the crowds of zombies trying to get inside. If you’re lucky, you should only have to hold out for a few days before your mission is over. If you’re not…well, there are worse places to die. 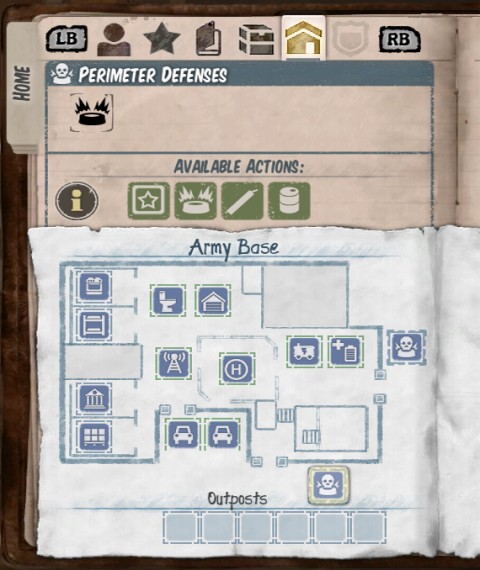 From the map, you can see that this is a brand-new base, built from scratch to protect your unit in Lifeline.It has four custom outdoor sites, an array of brand-new facilities, a layer of zombie-killing defenses, and some new mechanical tweaks.

Field Workshop
Your mission in Lifeline is a race against the clock — you can’t afford to wait around for a day while your weapons sit in the supply chest, waiting to be repaired.So when you build the new military Field Workshop, it unlocks the ability to repair weapons instantly from the supply chest interface, simply by spending a few Materials.

And if you really invest in that Field Workshop, you can eventually upgrade it into an Ammunition Shop. This allows you to take the raw Ammo resource and process it into whatever caliber of ammunition you might want.Found a .50-caliber sniper rifle, but only have three rounds for it? Not anymore — get yourself an Ammunition Shop, and you can fill up that magazine as many times as you want, provided you can get the resources.

Landing Zone
In an overrun city full of panicking civilians, it’s a lot harder to track down supplies over the radio. But as a military unit, you have another option — spending some Influence to order a supply drop from HQ. 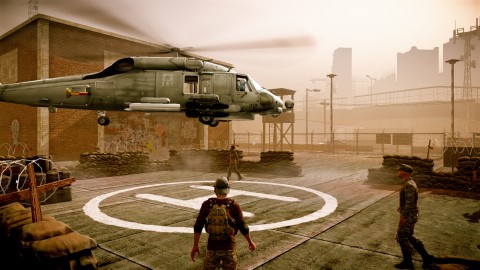 Supply drops take time to deliver to your Landing Zone, but once they arrive, they make an enormous difference. You can order packages that contain any of the five core resources, or even order weapons from among the 40 new firearms that Brant (our resident weapons manufacturer) created just forLifeline.But file your requests quickly — we can’t guarantee that these options will always be around.

Ops Center
Replacing the old Library is the Ops Center, your commanding officer’s base of operations. You can still research new crafting options here, but more importantly, this is where you get to select your Tactics.

Tactics determine what your soldiers will try to accomplish while you’re out pursuing missions. Set up supply lines, search for stranded soldiers to reinforce the unit, organize zombie hunts to thin the horde … what you choose says a lot about your priorities as a leader.Perimeter Defenses
These are what really set Black Friday apart from the other bases in State of Decay. Outside the perimeter, there is an open area where you can install a variety of traps, to make it possible to weather a full-scale zombie attack.

Mines are the simplest perimeter defense. Spend some Ammo to stock them up, and they’ll thin out any horde that tries to run across them with a cannonade of explosions. The first wave of zombies usually bears the brunt of this defense — as the mines thin out, the zeds can cross them safely in greater numbers. 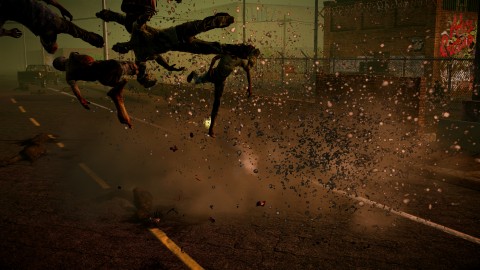 THINGS THAT MAKE YOU GO BOOM.
Propane tanks are a favorite for commanders who love precision and efficiency. Placed around the outer perimeter, they sit and wait for a well-timed gunshot to set them off in a fiery explosion, taking even the most heavily-armored zombies with them.Fireworks traps (bundles of fireworks attached to compressed-air canisters) use a pyrotechnic display to lure zombies in, before going off with a giant bang.Flying a helicopter into your base is like ringing the dinner bell — Lifelinefeatures the largest-scale zombie attacks anywhere in State of Decay. You’re going to want to keep your defenses stocked … or else you’ll be dealing with the horde yourself.

New Outdoor Facilities
Power was one of the first things the city lost, and working generators are hard to come by. You’ll need to build your own Generator facility at the base to keep the juice flowing, and to unlock your most powerful facility actions. 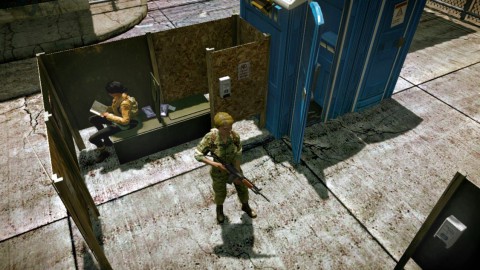 HAWKES GIVES MAYA SOME PRIVACY.
But even more important than electricity is the Latrine. You have limited slots for facilities, so you may be tempted to leave the “useless” Latrine off the list. That’s all well and good … until the E. Coli settles in. Make your people go without a Latrine, and soon you’ll find that they’re getting sicker by the day.Home away from Home

Our goal with Black Friday was to do more than simply add another Home Site to the game. As players, we identify with our base almost as much as we identify with our favorite characters … which means that this new base is probably our single most important means of expressing what State of Decay: Lifeline is about.

It’s about facing the apocalypse as a soldier. It’s about working with capable, confident professionals that you respect. It’s about preparing for everything, and then making fast decisions when things go wrong.It’s also about blowing up zombies. Enjoy!(And don’t forget to tell us what you’re thinking in the comments — just click the green tape!)

Lifeline DLC, as well as tons of bug fixes coming on the 30th of May.

State of Decay lands on steam, although it's a Early Access beta where it's xbox 360 controller only, and still has issues, but if you are interested...

Basically changes your 3 main characters slightly. Choosing from each. Marcus with Armor, and Maya with a mohawk, for example. See the full description...

Upgrades the Savini Household with barricades and fancy things when you move in - oooo ahh!! Adds the same and a few overturned trucks to Snyder Trucking...

This mod aims to recreate the world of the undead as envisioned by the father of zombie movies, George Romero. The Romero zombies are the classic slow...

Like many of you, I absolutely LOVE the game. But at times, especially later in the game, it seems way too easy. I have installed mods like the Hard Mode...

hi, can some one help me how to mod the game's UI ?
change few pics here and there ?
thanks

Can someone help me to install the mod? I unpacked the files like descriped in my State of Decay root folder before playing the first time, but they don't work. For example I unpacked the Slow Zombies folder and replaced the zombietypes.win.mbmd file, but even so there are zombies running after me or my vehicles in the game. I also installed the mod that weapns from the locker don't need influence, but I still loose it when I take a weapon.

Edit: I play the main story.

How do I start the game? I downloaded "State of Decay: Apocalypse", but there's no .exe file or anything..?

Breakdown was disappointing, just a couple new weapons in a infinite mode, when you get the RV (repaired, feuled) after traveling around the same map becomes reset which is just everything becoming unlooted, and becoming 'more difficult' (more zombies, less loot), with you slowly upgrading your character and eventually unlocking heroes when you meet one in game (that have different attributes and stuff), personally never met a hero and wouldn't want to because then I wouldn't be able to use my upgraded character. Lifeline I hope makes up for it for those wanting new content.

Games alright but its extremely buggy for me. The PC port is a bad port unfortunately. Not a fan of the limited resolutions it gives me.

I did however enjoy the DLC they added.

I have no problem with the game after 100hours + playing. Check Stream Update and your Window compatibility, mate

Good game. It's addictive and really makes you feel you are in a zombie world. The main story is short and the quests are repetitive. Usually I just ignore them.
What I really dont like is the way the game keeps simulating even when you are not playing. It makes me feel that I have to pay attention to the game everyday and for that I would rather play a MMORPG or something similar.

It would be great if the mod comunity would have total access to the game.

is there a mod or a way to keep your gun out instead of auto dissapearing it?like leave it in your hands.