As a player, you are able to choose what skills and abilities you will develop as you voyage though the complex and dangerous fantasy world of Forgotten Realms. Be a deadly and dangerous Rogue moving through the shadows using stealth and secrecy, be a scholarly Wizard and wield powerful magic against your enemies, be a hulking Barbarian whose lust for battle is matched only by his terrible rage, be an armor-clad Paladin who protects the innocent and vanquishes his foes, be a crusading Cleric who heals the sick and defends the helpless… be all this and more.

Neverwinter Nights allows you to create your own worlds. This revolutionary game will come with all the tools needed to construct your own unique lands of adventure. The Neverwinter Nights Aurora Toolset allows even novice users to construct everything from a quiet, misty forest or a dripping cavern of foul evil, to a king’s court. All the monsters, items, set pieces and settings are there for world builders to use. But do not stop there; construct traps, encounters, custom monsters and magic items to make your adventure unique.

BETA ON THE WAY


I'm happy to announce that, more than a year and a half after the previous release of JA:P, there will finally be a beta release of July Anarchy Prologue 1.3 this coming Friday!

Version 1.3.1, the beta release of the REMIX edition, may still contain errors, but is still by far the most stable release of July Anarchy Prologue yet. The mod has been almost entirely rebuilt from the ground up, showcasing the revolutionary new spawning system that creates huge procedurally-generated battles over large maps, turning Neverwinter Nights into a fast-paced action-RPG. New units, weapons, and graphics are also in this release, as well as a heavily-revamped backstory and completely rewritten dialogue. 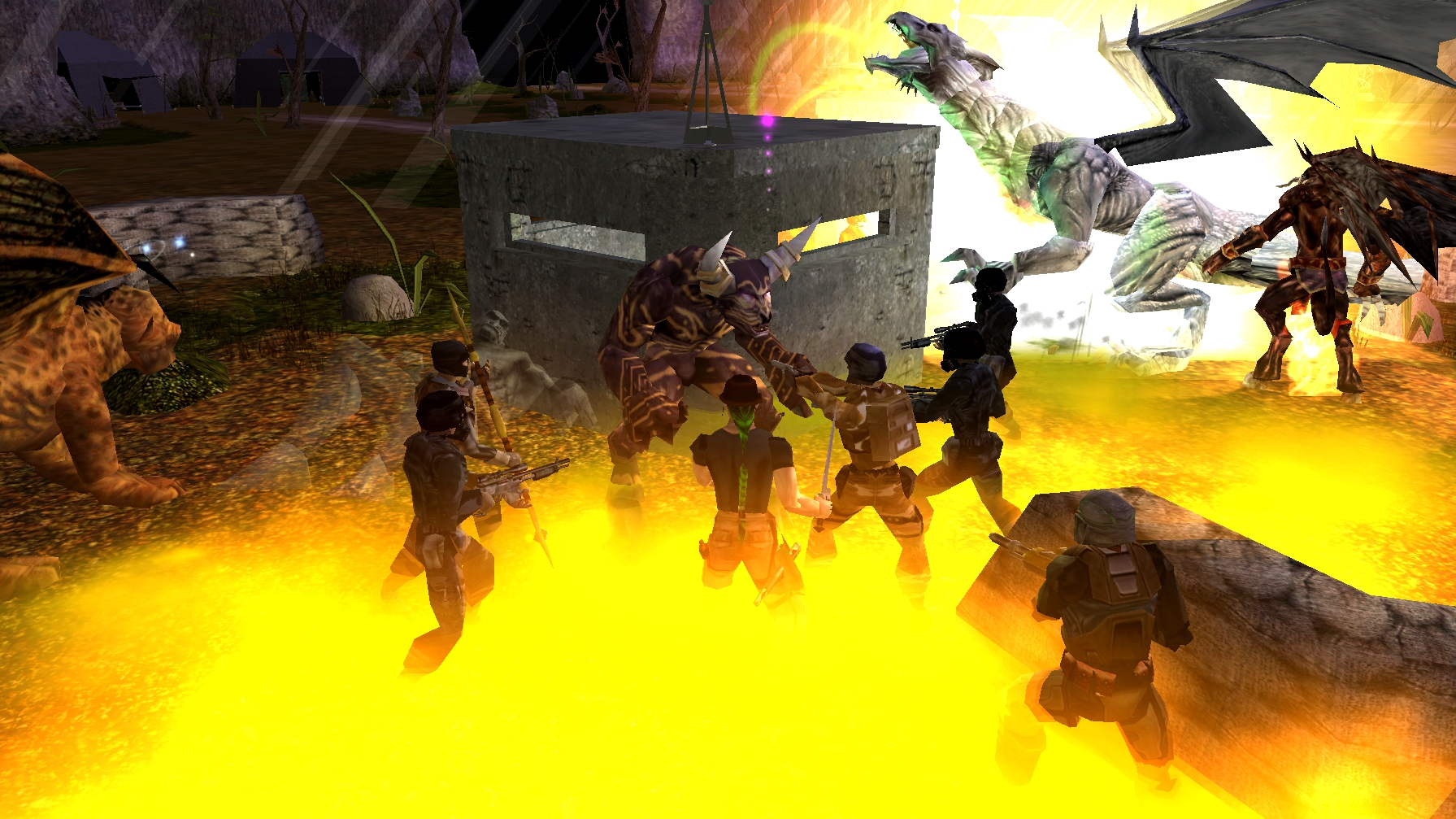 AI allies were mostly useless in previous versions. Here, they're smarter, stronger, and essential to capturing territory throughout the base.

As a beta, there may still be glitches and stability issues, especially with the new code. 1.3.1 also does not yet implement planned media content, such as new voicework and an ending credits movie. This version is still a work in progress and player feedback will be key to making this mod as playable as possible. However the core gameplay is nearly at the level we want it to be, being entirely different from any NWN mod prior.

It's difficult to keep track of all the changes that took place since this is a complete rebuild, but here's an approximate changelog:

And many more.
Be sure to check back here Friday evening for the release!

Manifested Fate - Beyond the Dead Mod released today for download

I present to you, Manifested Fate! A survival horror mod for NWN.

EA have not found any alternative to the dying Gamespy service and a large number of games thus lose multiplayer support.

Manifested Fate - Beyond the Dead Classes

This is the module A Strange Privileged Life. It has been bug tested as much as possible and there shouldn't be any game stopping errors. A walkthrough...

This is a walkthrough of the first quest for the module. It introduces the important things players will need to know about how the module uses the skills...

This is the latest version of the modual. v1.3 There are many grammar fixes and a few bugs and quest that were not triggering correctly. Please be aware...

In preparation for our release of Rise of Relthane, we decided it was time to re-lease one of our more popular older battle scenarios, the Battle for...

UPDATED: HAK File v.3.1 - Fixed This is a required file to play the mod. Please download this file full version of the HAK file. If you have already downloaded...

FIXED File Update Required. Please download this file to fix the issue of the game starting up complaining about a missing file. Please delete the older...

Hello. I'm working on a mod for Never Winter Nights. I hope to be apart of the community soon. How active is it these days?

I see this page was used by Also_Known_As_Peter (Wagner) and that he's been trolling here. I actually remember this guy from college. We went to the same college together a couple of years back, the Holy Américo College (Colegio San Américo) of course despite being a religious college, Wagner was not affiliated with religion as another noted here but his mildly annoying non-religious views weren't problematic, it was his attitude and temper tantrums that were so it's no shock that he's remained this way.

I've actually followed him closely on this site, his mods were quite amusing actually. Now from someone whose only achievement at college was excelling at writing, his mods were pretty badly developed but he was always inept when it came to creativity.

His trolling is pathetic, I suggest you all try your best to ignore it.

What happen to Equilibrium of the Night (Celeritas Eos) mod?

No clue but like most of us expected, It wasn't completed. One of the mod authors was banned a few days before the page went done. It seemed like a sweet project, Won't see the light of day likely.

Does anyone know why he was banned?

To be honest we don't really know what happened to the demo or why the mod page was taken down. There were some creative differences between the mod team, but the CE page vanishing took us all by surprise and we've gotten no real answer from either MODDB staff or the mod's project lead as to why it was removed.
We had planned to put the project on hiatus anyway but still wanted the currently-existing versions to remain available. If there's still demand, we can see about making a new page and re-uploading our existing work.

I for one would like to see a new link for downloading the demo, as I never got a chance to try it. I had the mod bookmarked a long time ago only to see it had disappeared when checking up on it.

I'll see what I can do. We had two demos, one that was official and another that was basically a leaked version of the mod. People seemed to like the latter because it was so much bigger, but members of the team had serious reservations about some content in that version.

I should at least be able to re-upload the "Avue" demo with some tweaks. This would most likely go up on sites more dedicated to NWN until we figure out why the CE page vanished on MODDB.

I played this a long time ago, it's a great RPG. It's too bad there aren't many mods that are developed for it today.

NWN is a wonderful game. What surprised me was the amount of options you get to chose for your character when making him or her. There are 7 races to chose from and you can create your own sub race. There are many classes to chose from and then their is the alignment you chose for your character. The campaign is very long and the story is good - some of the areas are memorable - like Charwood village. I picked up the Deluxe edition for £1 which contains the two expansions - along with the toolset…