In the years following mankind's colonization of Mars, our humble protagonist awakens aboard the massive starship U.S.S. Anvil to find the vessel and crew besieged by an unknown enemy. Now with the threat of danger lurking at every turn, you must confront a dastardly foe from across the galaxy, rescue the crew, and escape with your life! 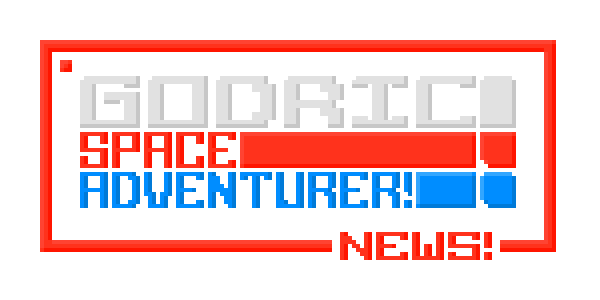 I'm long overdue for posting a news update, thankfully that only means that there's more to talk about! The past couple of weeks have been pretty busy in regards to development, and I'm hoping to have a good deal of new content and info up on the blog over the next week.

Just finished up an interview for the GameMaker Podcast, it was a really great opportunity to talk a little bit about Godric! and game design in general. The podcast should be online this coming Wednesday, May 8th, and I highly recommend giving it a listen if you're interested in game design/GameMaker.

On a similar note the 6th GMC Jam will take place this weekend from Saturday until Monday! The jam is a 72-hour game jam put on by the GameMaker Community, similar to the ever popular Ludum Dare. Participants have 72 hours to create a game; generally one incorporating a predetermined "theme" and "handicap", using GameMaker.

Sadly, prior commitments have had a terrible habit of preventing me from participating in past game jams...but by some miracle I've been granted a weekend free from any major distractions. That said, I'm very excited to be able to take part in the GMC Jam #6! It will be nice to take a brief diversion from working on Godric! ﻿﻿, and I'll be sure to post my progress here throughout the jam.

As far as development on the game is concerned:

As usual, for more information and updates feel free to check out the blog and follow me on twitter!

The first in a series of "features" examining the locations, organizations, and events in the world of Godric! Space Adventurer! Backstory, huzzah!

Here's another weekly update on the development progress for Godric! Space Adventurer! This week we highlight some gameplay improvements, as well as some...

In addition to my daily updates on the Chromacloud blog, I hope to post weekly or bi-weekly news updates here on the IndieDB page. This week I'll give...

Quite possibly, at this point Godric has only been in development for 17 days..obviously not very long. Ideally I'd like to spend another month or two on the game and at the point, depending on the quality of the finished result, I'll decide about pricing. It's likely I may side with the "pay-what-you-want" method. Thanks for your question!