Fragment Planet is set in a post-apocalyptic world, where the earth has been destroyed because of a experiment to gain a new energy source. During the explosion the fragments of the old world have been charged with this energy, which kept them flying and made it possible for the last humans to survive. Years after the accident the newly formed fractions are fighting in a great war to conquest flying islands and to regain lost technology.

Thanks for voting and helping Fragment Planet on it's quest to become the 2021 Indie of the Year. You are now in with a chance to score some free games. Help this game secure more votes by embedding the widget (or link) we have included below on your favorite sites.

This is the first real update and the last before the first release, but please be aware that it is not a final release! It is a alpha release with 4 units... it's only purpose is to show you the concept of the game (I think the best name would be "concept demo").

But let's start with the real update. I won't talk about bugfixes or anything like that because you don't see a difference anyway, but I can tell you that I mainly fixed bugs in the last months and I tried to change only those things that were important for the gameplay. I also made bigger changes to some of the models because they didn't fit the setting of the game. A sci-fi/podracer jet does not fit in a steampunk game so I changed its model to a biplane! It still shoots homing missiles because they are easier to code and look cooler. 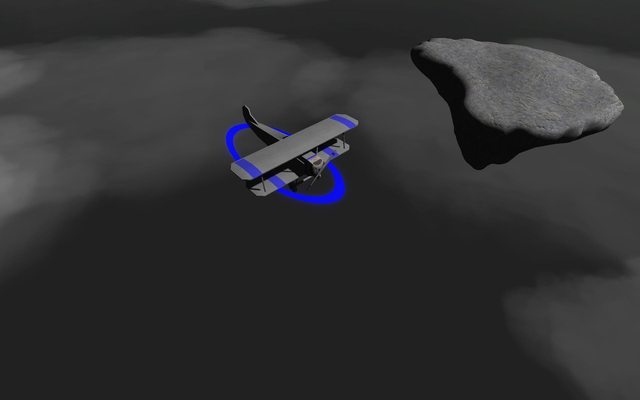 The mainbase was a strange metal sphere that flew with a white glowing energy beam. Now it's a flying oil platform. 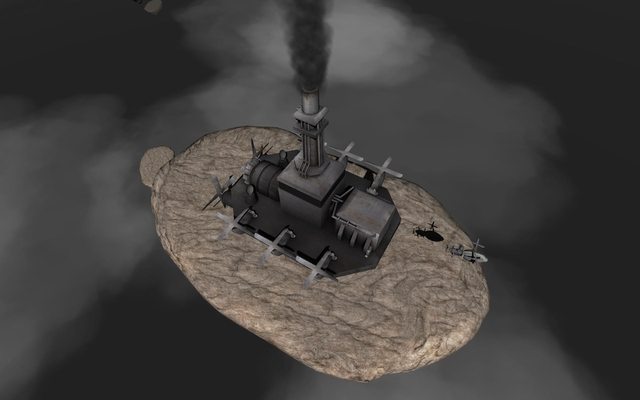 In the background of this picture the builder materializes a building with its energy beam. (I know that isn't very steampunk, but it was the only method I could think of to build those buildings without being really strange for gameplay or extremely work expensive) 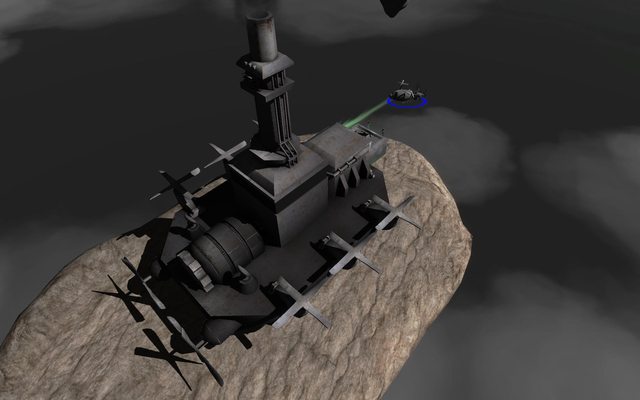 Here is the new resource compressor. The glowing energy ball looked cool, but unfortunately it didn't fit in at all. In the background you can see a new unit! Btw... the textures are as ugly as ever, but I can't concentrate on everything... I am working alone after all... 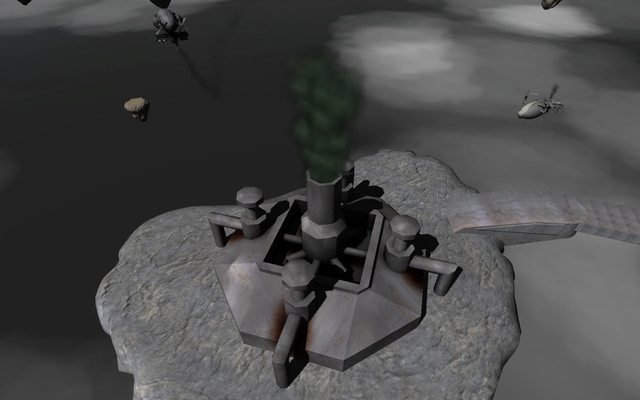 For those who haven't read my first update: Every island has energy, which slowly regenerates. This compressor converts energy in resources (I'm still searching for names...). You need both energy and resource to build units or buildings, so you will have to find a average of energy regeneration and resource gain. The only really new building is really fitting in this topic! It's a silo that increases the energy capacity: 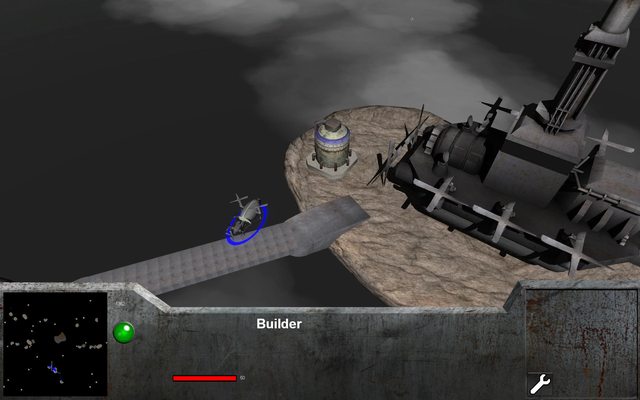 Yes, it's the small thing with the cool texture! In fact it is the only model where I really tried to make a good texture (just to see if I COULD make a good one).
The last thing I will show you is one of the most important units in the game. It is a island transporter, that uses small drones to move islands. In future releases you will be able to upgrade those transporters to collect resource from small resource chunks, that fly freely around (at specific locations), so you will be able to get resource without using energy, but you are going to have to fight for those locations. Some other upgrades I am thinking of are ground unit transport-drones and bombs, which make the island transporter to a real threat for the enemy! 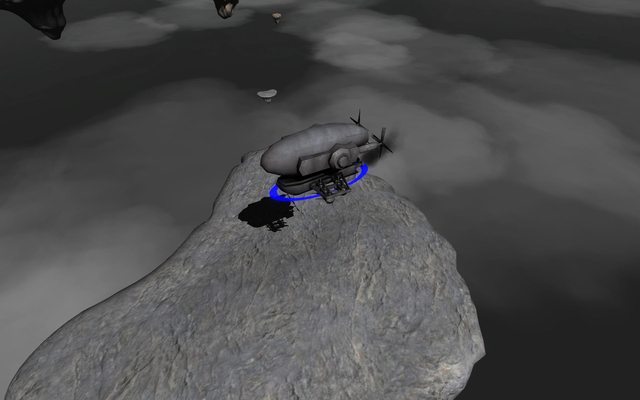 Here it is transporting a island. Unfortunately you can't see it very well on this screen, but you'll be able to see it on Friday anyway! 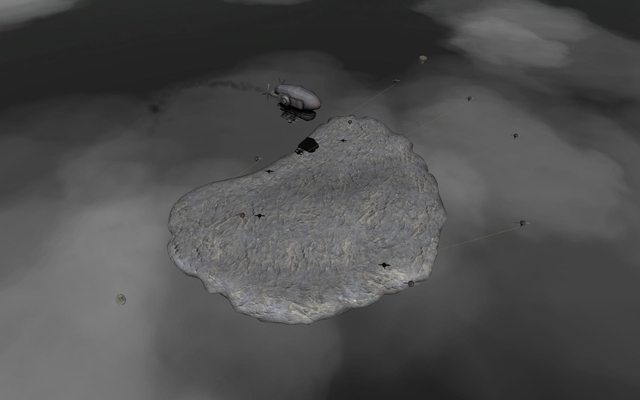 Here is a last screen where the island just has been connected to the main base. This is very important because you can only build on islands that are connected to a main base (you can build more than one, but they are quite expensive). Buildings that get disconnected from the main base become neutral and everybody (even the enemy) can connect them to their main base. 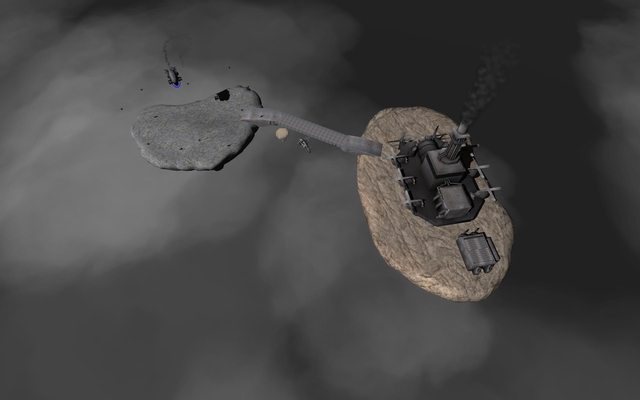 If you want to follow the development of the game you can follow me on twitter @nonakesh1 . I haven't been twittering very much (mainly because I have no real followers...), but I will start as soon as somebody follows me!

If you want to send me feedback, or you ideas for the game you can send me a pm!

In this first article I will introduce the first features of the games and my plans for the future.

Fixes a bug that lets bridges explode, when they are placed on a neutral island. You have to select the folder where the exe is located.

This is the conzept demo of Fragment Planet. Its purpose is to show you the concept of the game. It is NOT bug free. Please keep in mind that it has been...

Hi!
First of all: This game will be great! i love the concept! I kind of dream of a game with flying islands since a few years, but being more of a designer and less of a programmer i never tried to make one.
And now yesterday i found your Game on the Ars Electronica Festival in Linz....

now there is one tip: it would be great of you to add some data output in the game.
something like a ressource and energy counter.
not only for reason of playability, but also it would make it more easy for us testers to find bugs.

so go on and make this what it can be!

btw: if you need some kind oft support creating art for the game ore texting things it would be an honor for me to help ya out.

Thank you for the feedback! There is in fact a debug output (the engine does this automatically), but I don't really know what you mean by resource and energy counter.

Thank you for your offer to help me! I'll send you a pm.

By the way, I'm sorry that I answered so late... I didn't see your comment and IndieDB has no notification function, or at least I couldn't find it.

Gotta say this game is Awsome so far!! lots of potential imo ^^.By the way was this inspired by the old game time of defiance? kinda similar concept in a way

Thanks! I have never played that game, but I think I will try it.

Thank you! If you have any ideas, or found bugs, please write me a pm or a mail!

yes please show us more... the concept is very interesting... Fragment-Planet sounds like a strategy game, but with some action