Here, it is up to you to choose. Will you lead the desperate people of Celenheim and save them from destruction, or will you ally with the dark hordes of the Outlands and overrun the Enclave to get back what you claim to be yours? Make your decision and experience incredibly atmospheric and intense medieval combat action!

More than ten years after the release of Enclave, the engine and level design still shine as some of the best. One can imagine the excitement when Starbreeze first released Ogier, their powerful and easy-to-use tool set, as a gift to the community in early 2004. Sadly, even after all this time, no mods have been released for the game. Here's hoping the fanbase can help change that! 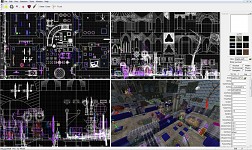 Source files of Enclave's official levels have never been released. In an effort to remedy this, I've put together a set of examples and documentation which cover most major effects from the game. It also contains a collection of recreated level geometry and prefabs. This download is meant as a companion to the already released Ogier documentation and further expands on the engine's systems with a focus on Enclave. (Although much of it can also be applied to games such as Knights of the Temple.)

The files are located on the MOD DB downloads page here.

If you have any questions about the tools, or wish to share your own discoveries for inclusion in a future version of the documentation, feel free to contact me. Until then, happy modding!

A community at www.ogier-editor.com is available for discussion about the game and tools.

Tutorial on how to setup controllers in Enclave for the PC.

Quick reference for the game's level editor. Originally posted on the developer's forum.

The only reason that this tutorial is in any coherent form is probably because Methril did an editing job on it. Sorry if I kept repeating myself even...

This is a release of the map source from the custom Northern Watch level for Enclave. For a compiled version of the map that is playable, look for the...

This is a simple texture pack which adds some basic developer textures for use with Ogier. These can be useful to help block out geometry when planning...

A set of model examples to help with importing custom meshes into the game. These examples were included as part of the Knights of the Temple GDK release...

This fix makes it possible to use Ogier's Sound Browser and in-editor sound features. Included are recompiled versions of Enclave's .XWC files which can...

The most recent Game Development Kit release for Enclave. This effectively adds the entity list, surface (texture) files, and compile programs which Ogier...

This game was never ported to PS2, AFAIK and as far as gamefaqs says Gamefaqs.gamespot.com.
If you have confirmation of its existence, please send an update to gamefaqs.

On the contrary, Enclave: Shadows of Twilight (the same game) was published for Wii in 2012, please update profile info.
Thanks.

Is there anyway to edit the singleplayer levels? decompile the XW files?

I want to add more enemies and make it harder.

Enclave has always been in my top 5 Favorite games ever.

If there was a multiplayer mod released for this game, I would absolutely buy a new copy on steam to play with my friends.

Strange that no one has made anything for this sooner. I've never made a mod before, but I'm going to try my hand at this one. Thanks for the tools!

no mods? At least only paid $5 usd for this in the bundle bundlestars.com/all-bundles/kingdoms-bundle/ -- sadly only as steam keys

hopefully there will be more mod content for multiplayer use

I GREATLY prefer Desura over steam !!

It would be great to see some mods for this game. I've uploaded the most recent GDK release, as well as three versions of Ogier. (The tool used for creating levels, surfaces, animations, etc)

I should have some additional documentation and example maps released soon.

Good work. I too would love to see mods for this game. Sadly I lack the skills myself.

Still working on that documentation, just got slowed down a bit by a long distance move.

The tools are fairly easy to learn and very streamlined. if You ever decide to try your hand at them, I'd be happy to help with any questions!