Battle an army of sycophantic cultists, zombies, gargoyles, hellhounds, and an insatiable host of horrors in your quest to defeat the evil Tchernobog. Squirm through 42 loathesome levels filled with more atmosphere than a Lovecraftian mausoleum. Begin your journey armed with a simple pitchfork and earn more effective implements of destruction like aerosol cans, flare guns, voodoo dolls and more!

◦ Play online in co-operative mode, kill each other in “Bloodbath” or split the difference in classic 4v4 team-based “Capture The Flag” mayhem

◦ Battle it out in local split-screen action

• Roll your own soundtrack with full CD and MIDI music support

• Look fully up and down with a new 3D view, or stick with the classic BUILD-engine style! 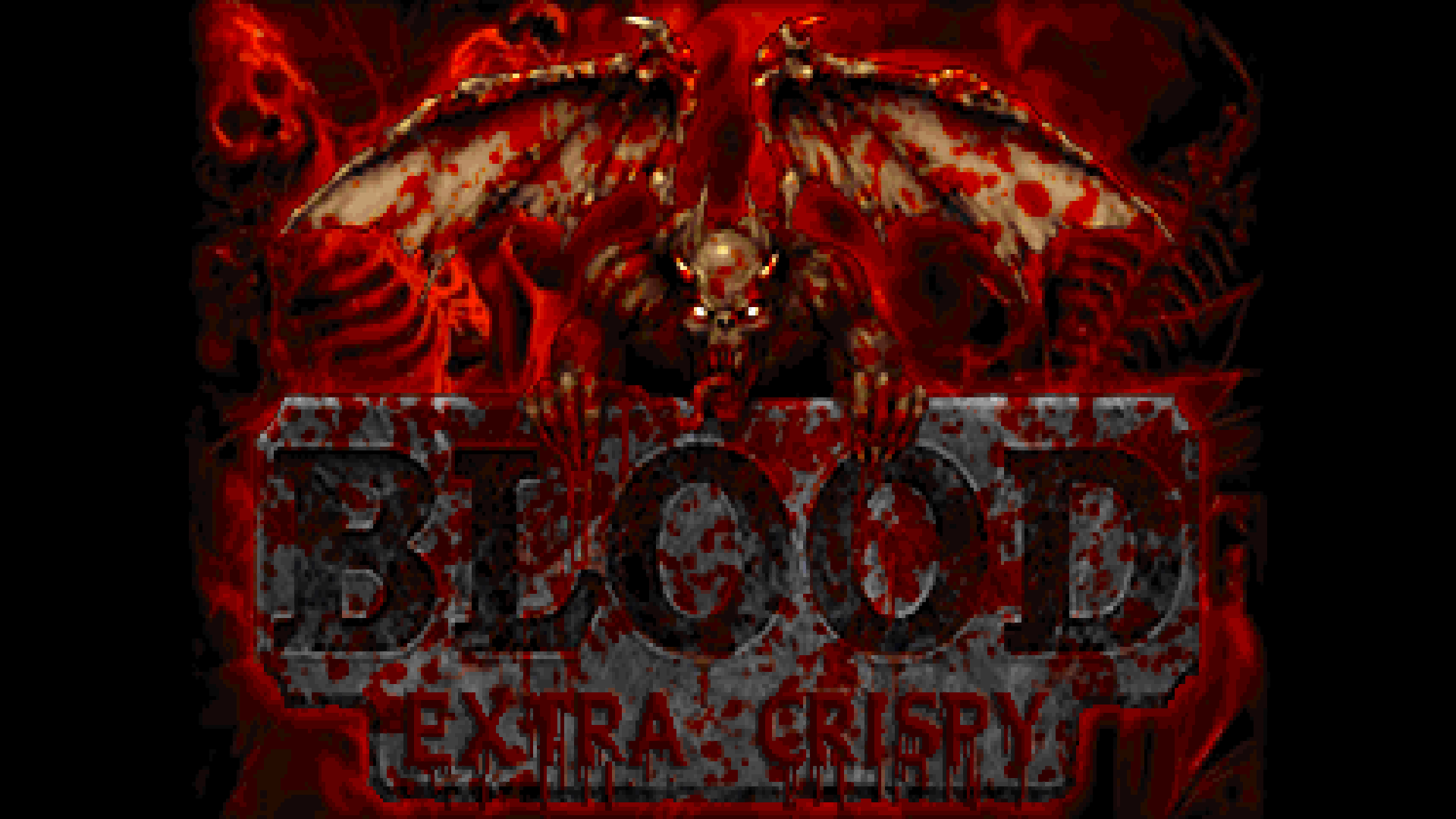 -Weapons-
Reduced the chance the "Here's Caleb" VO line plays when you engage the Zombie Axe.
When in either the Demon modes or Hero/Slasher modes, Invisibilty Powerups are rendered useless.
Meat cleavers caught by the player and thrown back at Fat Zombies now stick in walls, floors, and ceilings.
When dropped Blunderbusses make a sound when hitting the floor.
When dropped Death Mowers make a sound when hitting the floor.
Wrath Demon Mode Possession range increased significantly.
When in Wrath Demon mode and within a certain range of human enemies that can be transformed into a demon, a pentagram symbol will appear over their heads and they are able to be possessed. 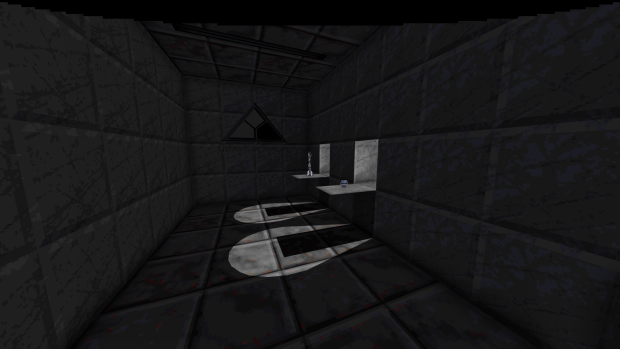 On E3M5 a Terminator Hero/Slasher Powerup was added in the form of a T800 severed arm and CPU that you can obtain by pressing the "USE" button when near them and aiming at them.
The Terminator Hero/Slasher Powerup will last for 1 minute and will render you invulnerable to all attacks and can be refilled by killing enemies.
The Terminator Hero/Slasher Powerup's Fire Mode 1 fires your plasma rifle.
The Terminator Hero/Slasher Powerup's Fire Mode 2 fires your lever action shotgun.
The Terminator Hero/Slasher Powerup's Fire Mode 1 and 2 together fires your plasma rifle and lever action shotgun at the same time.
The Terminator Hero/Slasher Powerup's Fire Mode 3 opens up a rift to the future sucking in nearby enemies.
The Terminator Hero/Slasher Powerup's Fire Mode 4 puts away your plasma rifle and lever action shotgun and pulls out a minigun to use as long as the "AUTOMAPZOOMOUT" button is held down.
As the Terminator your HUD will display when the Future Rift Generator is ready for use.
Maxim Machine Gun turrets are now fired with both the "ATTACK" and "ALTATTACK" buttons and are dismounted with the "RUN" button and made mobile.
Drop the Mobile Maxim MG by swapping weapons.
Pick up the dropped Mobile Maxim MG by pressing the USE button when near them.
The Napalm Cannon no longer emits smoke from it's barrel as it idles.
Added smoke effects to the Blunderbuss's barrel when shooting it.
The Zombie Axe, Phantasm Orb, and Blunderbuss have been rescripted to be a part of the weapon inventory.
(This allows weapon bobbing while walking, real interaction with sector shading, and the ability to perform interactions with enemies, map objects, etc. wgile using the weapons.)
Drop the Blunderbuss by swapping to another weapon.
Crosshairs are removed when using the Lament Box.
Added a new firing sound for Maxim MG.
Press the "RUN + TURNLEFT" buttons to use the Vile Anathema in your inventory to resurrect the following dead enemies to your side:
(Enemies that were killed by special deaths, burning to death, being gibbed, or are in water cannot be brought back.)
Axe zombies
Fat Zombies
Cultists - Shotgun
Fanatics - Tommygun
Zealots - Tesla
Acholytes - TNT
Gargoyles
Hell Hounds
Gill Beasts
Crimson Innocents
Press the "RUN + TURNRIGHT" buttons to use the Bastion Chronometer in your inventory to stop all projectiles fired by enemies in midair over a 15 second period.
During the 15 second period the Bastion Chronometer will force the stopped projectiles to fly back in the direction they came from every second, will cause thrown enemy TNT to explode in their hands, and revert melee damage back at the attacking enemy.
The Diving Suit automatically engaging when in water has been restored, but it will not turn on automatically if you are using a Hero/Slasher Powerup.
Added missile sprites for the Devastator missiles from Duke 3D.
Added the Rocket Launcher from Shadow Warrior to E3M5 in a new secret location. (ALTATTACK Button toggles fire modes)
The Blasphemous Cannister's Purify attack can now kill enemies with head shots, stomach shots, and leg shots.
Added sound effects to signify that the Purify or Purge attack is fully charged and ready for use.
All inventory based weapons (Axe, Orb, Necro Amulet, Stopwatch) now switch back to the previous weapon when they are used or put away.
All special powerups (Demon Modes, Hero/Slashers, Diving Suit) now switch back to the previous weapon when they are used or put away.
Reduced the damage done to bosses by the Tesla Cannon's BFG projectile.
The Rivet Cannon no longer produces smoke effects.
Added new VO lines when using the Maxim Machine Gun.
Added new VO lines when using the Zombie Axe.
Added new VO lines that might play when using Cannons mounted on ships.
Added VO lines for the Life Leech staff when idle, attacking, or when the player is very low on health.
Added animations for the talking Life Leech weapon.
Fireworks Artillery can be exploded with gunfire or other explosives and will fire off multiple fireworks projectiles in different directions. 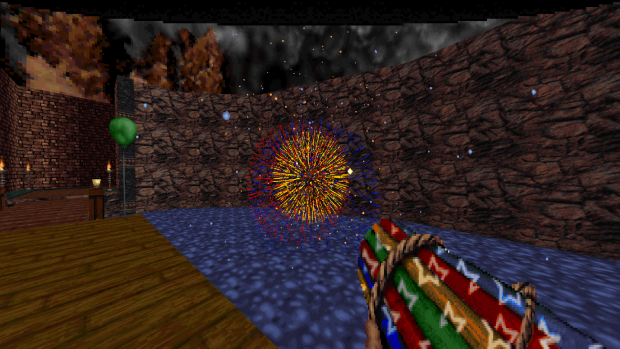 Fireworks Artillery can be picked up using the "USE" button and will fire off a barrage of firework projectiles for around 5 seconds before being discarded.
Removed the smoke emmitted from the Devil's Bore's muzzle while idle.
Added a new sound effect for the Grimoire when casting the Death Vortex spell and pulling the heart out of the book.
If you pick up a Gorge Demon Powerup while using the Death Mower you will properly drop the mower.
Added new sprites for the Death Mower's bloody variants.
Added an overhead "Reload" icon to Cannons that need to be reloaded before use.
Carrying the Death Mower no longer makes you walk slow.
All Hero/Slasher explosives throw strength gauge now transfers correctly when saving and loading.
Picking up a Gorge Demon Powerup while using a Hero/Slasher Powerup will end the currently used powerup no matter what. 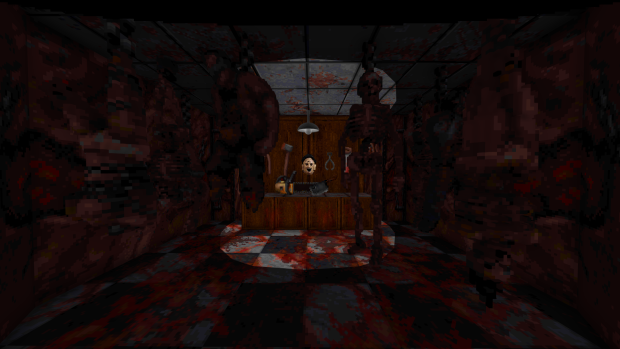 -Player-
Added a lot of VO lines to make Caleb a lot more vocal when killing enemies.
Increased volume for Caleb's "Here's Johnny." VO line.
You can no longer move the camera around while performing a Gory Kill or any other type of interaction that calls for it.
Wiping blood off your screen now clears the screen completely so you can interact with enemies and map objects immediately.
Added a new VO line for Caleb that sometimes plays when blood drips from his hat.
Increased the chance that Caleb's VO line will play when lighting TNT barrels with your lighter.
Added weapon specific VO lines for picking up new weapons.
When using a turret type weapon you will now face the direction that the weapon is facing when you start using it.

-Items-
Added a voxel for the Phantasm Orb pickup.
Jumpboots no longer negate damage from enemy attacks due to their damage types being changed from PUMMEL to HITSCAN.
Updated the VO line for the Devastator weapon pickup.
All non Super Armor pickups can now add armor points up to 200 for their armor type instead of stopping at 100 points. 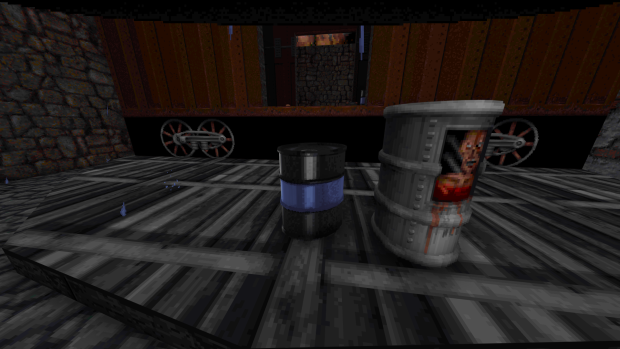 Some metal drums have been replaced by Cryo Drums that emit freezing gases when blown up freezing nearby enemies and you for 10 seconds.
You can eat Rat Burgers found on the grill in E1M4 or other maps to increase your health up to 200 points.
You can drink alcoholic beverages found in maps to fill your health up to 200 points.
Drinking too much alcohol will cause you to be drunk for a short period of time.
Added flies to random corpses used in maps as decorations.
Added overhead "USE" icons to map objects that you have to manually engage with the "USE" button.
Fire used as decorations in maps that are not spawned by HiddenExploder actors now cause fire damage when near them if they are of a certain size.

-Other-
Updated lots of smoke effects with new and improved sprites for explosions, bullet impacts, weapons, fire, etc.
Added a new sprite for artillery shells.
All dead bodies left behind from custom death animations can now be shot and blown up properly by bullets.
Rescripted how decapitated zombie heads spawn Living Zombie Heads to allow them to bounce more before spawning the enemy head.
Added a new sound effect for resurrecting dead bodies.
Cleaned up the scripts by removing redundant defined variables. 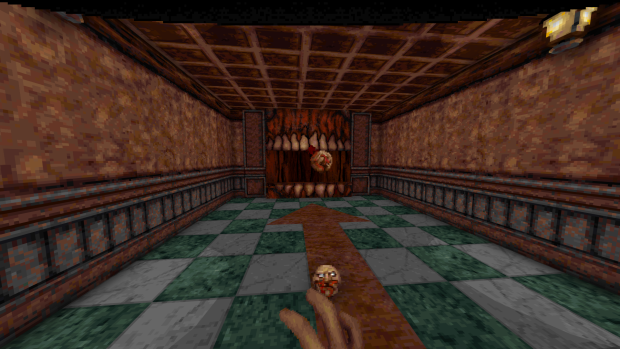 Severed dead zombie heads can be picked up and thrown by getting near them and pressing the "USE" button, causing small amounts of damage when impacting enemies.
Updated lots of sprites' surface type parameters to ensure they are producing the right kind of particle effects when shot.

This is a progress update for Blood's Death Wish v2.0, showing what's new and what's in store for the future.

After a long period of time BEC version 1.0 is finally gone live. Full of fresh features and even more optimized than ever before the first full release...

Arcade Mode aims to bring the fast paced point accumulation action similar to that seen in Doom 2016 to Blood. Paint the town red and kill everything...

Arcade Mode aims to bring the fast paced point accumulation action similar to that seen in Doom 2016 to Blood. Paint the town red and kill everything...

Hello people today I bring to you a long-awaited feature for BEC that I've been saying I would create once 1.0 was out. Well, here I am with that promise...

Ladies and gentlemen! Boys and girls! Children of all ages! Step right up! Don't be shy! BEC version 1.0 is finally here! Don't hold back and let loose...

The Bastard - Episode 1 - Turpid and Urban

IMPORTANT: THIS EPISODE IS ONLY SUPPORTED IN FRESH SUPPLY First episode of the Bastard. The Bastard release V.1.0 Designed by Cartoon Crusader Made in...

Well it's finally here. A highly optimized feature packed rendition of the BEC mod at its finest. 0.9 brings so many new features to the table and highly...

Version 0.8 of BEC is ready for your enjoyment. More polish on existing features and lots of bugs squashed as usual. Please leave comments. All feedback...

i tested this with reshade Reshade.me worth checking out

my bad. this may not be compatable with FS.

is compatible but only in vulkan

Is it just me or are there still pixels, although in options it states OpenGL

HAHAHA I been waiting...a the thing happened. IMO is much better than DukeNukem because the lovecraftian atmosphere. Is a cult game,a must play and now is refreshed ready for modding!

Is there going to be a linux version?