Astridia is set in all alternate universe, a universe in which a device was discovered during Apollo 11. The device, known as Astridia, provided humanity with a vast amount of knowledge, and taught man how to explore the stars. Over a few centuries, humanity had colonized the Solar system, and ventured beyond, all under the guidance of the IGSC, the Inter-Galactic Space Commission, an organisation comprised of the worlds elite. For centuries humanity has lived in peace, exploring the galaxy and researching new technologies, however now, in the year 2090, the peace is coming to and end.

At the core, Astridia is an sandbox RPG, with elements of a strategy game. The game has a main story, however there isn't a requirement for the player to complete it, and instead you may choose to forge your own path. Either join up with the IGSC military, fighting to protect humanity and its colonies.Or you could join one of the smaller pirate factions, plundering ships and raiding planets in search of loot. Or maybe you wish to start your own faction, proclaiming yourself to be the leader of the galaxy.

Inspired by games like Mount & Blade, Astridia places the player in a commanding role in combat, allowing them to send orders to their men in the battlefield while also taking part in the combat yourself. Astridia offers different ways of fighting your enemy, either by assaulting their fleet in space combat, or landing on an enemy planet with infantry.

Astridia is a single/multiplayer open world RPG strategy game being developed for Windows. Astridia offers a main quest line, however doesn't force the player to follow it, and instead offers many options for the player to forge their own path, be that either by joining one of the smaller factions, or creating your own. As well as offering RPG gameplay, it also has a layer of strategy to it. Combat is carried out between the player and a few NPC's, but it instead carried out by entire fleets. The player controls their own fleet, issuing orders and commands. Combat can take place in multiple ways, either in space battles or on the ground, with each having some of its own unique mechanics.

Astridia is being developed in JMonkey, an engine that handles the more complicated parts of the LWJGL and OpengGL, while still offering the ability to have lots of control on how the game works. Because of this, the project takes a lot longer to develop then it would if it was being made in Unity or Unreal. However, despite the extra challenge of JMonkey, we have made good progress in the two weeks we have been working on the project. The speed of development has been going so well, we are already at version 0.1.0, and we would like to show you some of the features. We have made a system that allows Solar systems and therefore entire galaxies to be programmed into the game very easily, as can be seen here with a recreation of some of our solar system. The downside of the system is that everything is loaded all at once, causing long load times when starting the game, and a large lag spike when looking at a planet for the first time. This will be worked on for future updates, so gameplay can be smoother.

The system generator scripts generate all the systems planets, as well as a station for each planet. These stations will be the way for the player to interact with the planet. 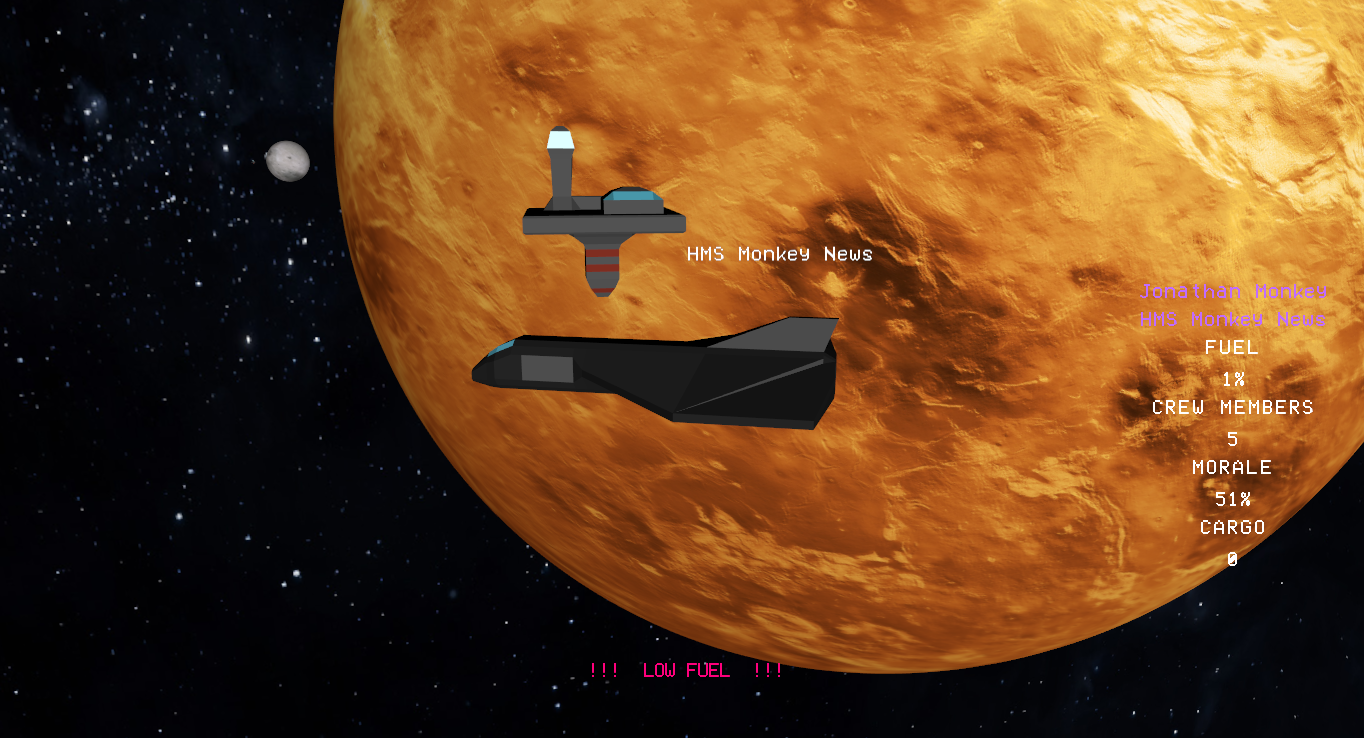 Classes have also been created that allow for the easy creation of new ships, as well as adding those ships into the galaxy. Currently we have two ships in the game, the civilian transport ship known as the sloop, and a destroyer. As you may have seen in some of the screenshots, we have some nice UI in the game. This was done using the Nifty library in JMonkey, and sped up development time massively. However, Nifty can't do everything, so we also created a way of displaying 2D text in 3D space, allowing us to place name tags over objects. This can be seen over the players ships, displaying the ships name.