"AI War breaks most of the genre’s rules. Which is precisely why it’s incredible... This out-of-the-blue one-man passion project is one of this year’s finest strategy games." - PC Gamer UK Review, November 2009

AI War is an entirely unique large-scale RTS with aspects of TBS, tower defense, and grand strategy. It features single or cooperative play with as many as 8 humans against a pair of powerful, intelligent AIs. These AIs are driven by an AI Progress stat that players contribute to through aggressive actions such as taking control of planets and destroying key units, forcing tough decisions regarding which targets are worth capturing or destroying. Human fleets are usually several thousand ships in size or larger, with games often featuring 30,000 units at any given time across galaxies of anywhere from 10 to 120 planets. Some games have reached as many as 90,000 units!

Despite this, players retain powerful control over their fleets in a macro-sense, ignoring painful micromanagement present in other games in favor of actual tactics like flanking. Meanwhile, ships themselves attempt to target enemies as intelligently as possible so the player can focus on the tasks that really matter. Scouting also plays a major role in the game, supplying an intel 'snapshot' about important capturable units, enemy fleet sizes, and planet ownership. Designed by RTS veterans and backed by strong, responsive support on the official forums and elsewhere, AI War is an exciting and refreshing experience.

This one is mostly a maintenance release, but there's some important iteration on Salvage and other features.

The salvage-reprisal waves were working pretty well but feedback showed they ultimately needed to be separated from normal waves into their own thing. Now they probably won't happen nearly as often (unless your fleet is an accident-waiting-to-happen permanently on the offensive... though I guess that's actually pretty accurate in some cases) and won't displace the normal wave mechanic. They'll also be much less of a threat in the early minutes of the game, to avoid the need for building serious defenses before you even start to attack.

The Neinzul Enclave Starship is hilariously powerful. In fact, hilariously over-powerful. And the hilarity is great particularly given the unit's past where relatively few players really wanted to use them. So we're not nerf-hammering it into the ground (indeed, the first two marks are getting a bit better), but ultimately it's not good for a single line of units to allow you to take heavily-defended systems without significant casualties. Further balance feedback (up or down) is quite welcome. 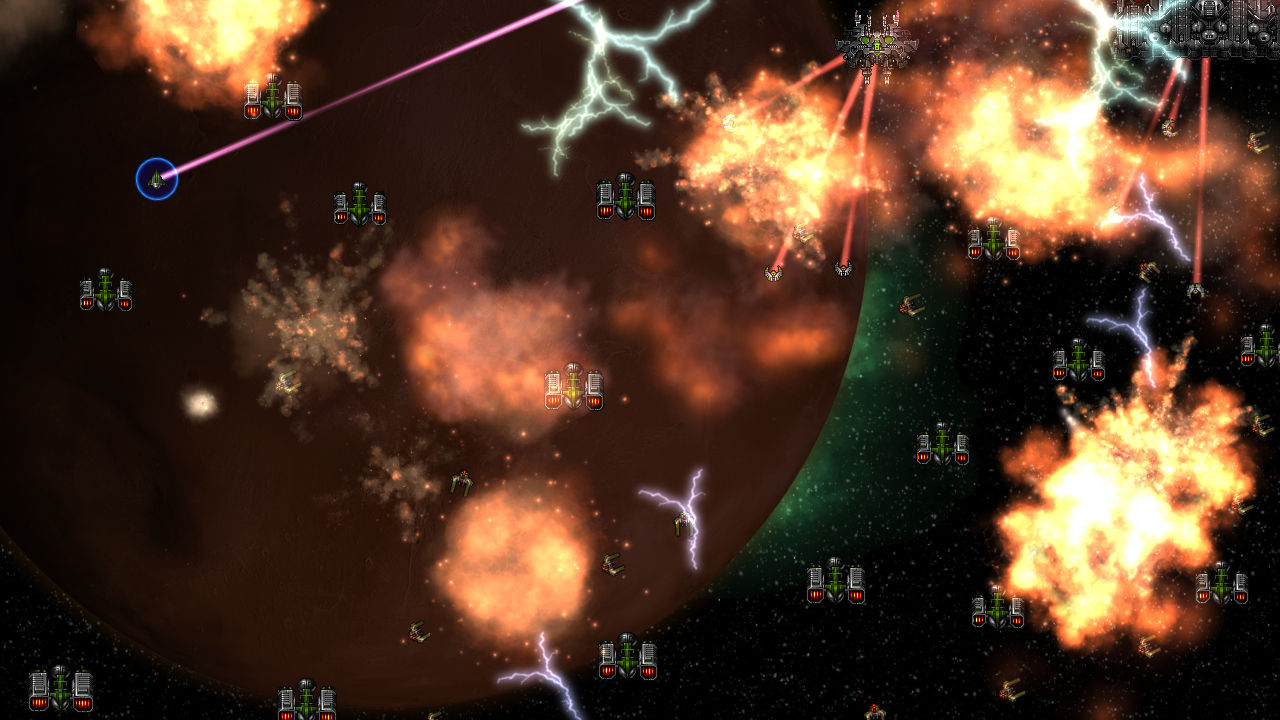 Hacking costs have seen another pass, with the ARS-redirection and design-corruption actions getting cheaper and the fab-hacking and sabotage actions getting more expensive.

And there's some important bugfixes, including one for the issue where the first two Showdown CPAs would imitate the third (and launch everything).

A new beta patch for AI War is out -- adding improvements to the recently added Salvage mechanic, along with other fixes and tweaks. Thanks for the feedback...

The latest beta patch for AI War is out now! This one addresses refleeting issues, combines metal and crystal (related to hacking, and more.

AI War: Children of Neinzul donations have wrapped up at over $44.5k for Child's Play!

I really really really would love to get in to this game but no matter how hard I tried, its just so darn hard. I felt like its the "dark souls" of Space RTS.

I was wondering if the 4x setting (slower one) would make a difference in this game?

Yeah, don't be afraid to find your comfort zone. Setting the game on it's lowest difficulty setting basically turns the game into a sandbox. I consider diff 1 through 5 to be Easy. They say 7 difficulty is "normal" but that can probably translate to "normal for them." You can also select easier AI to go up against at the start. Pretty much any aspect of the games difficulty can be tweaked. Just don't make the common mistake that a lot of players make with their first campaigns. A low planet setting doesn't make the game easier at all. You just turn the game into a cage match with a couple of 800 lb gorillas.

And yeah, Dark Souls of RTS isn't a bad analogy. I usually say that AI War is to RTS as Dwarf Fortress is to Sims.

I am suprised that noone mentioned "Supreme Commander" here.
I checked the demo just now and I was expecting something more original but I can see the rip offs of Supreme Commander in every corner of this game.
The economy system of the game is almost copied entirely as it is from Supreme Commander.

Even the "Reclaim of wreckage" feature from Supreme Commander is used in this game.

The creator of AI War has never tried to hide or deny the influence of Total Annihlation on AI War. Using the term "rip off" is harsh and juvenile. Practically every game developed borrows the best ideas of other games. Nothing is ever created in a vacuum.

Further, AI War has a depth to its design and gameplay that is unmatched by any other RTS I know of. That certainly includes SupCom.

Command Centers are more like StarCraft CCs, no? And the knowledge comparison is really stretching it. Wreckage reclamation is not the same either, wreckage is used for rebuilding lost structures, not taking resources from killed enemies. Only similarity is that metal and crystal are consumed over time instead of when a unit is queued but that has been in use since the days of Command & Conquer (dunno about Dune 2 since I only played the Dune 2000 remake).

The core concept of AI War is the asymmetry between you and the AI, SupCom has nothing like that. Some people improvise by playing coop against top difficulty AIs in SupCom but AI War is completely designed around that kind of setup.

Ofcourse there are and has to be areas where AI Wars differs from Supreme Commander. Otherwise why bother making a game if it's going to be completely same with a previous title.
Don't get me wrong I am not saying that AI Wars is a bad game. It just reminds me so much of Supreme Commander to a degree that I feel like I am playing a reduced version of SupCom. Cheers.

Balls, and when i though i'd seen everything. Looking forward to it.

I enjoy this game a lot, this game has enough content and replay ability if i was forced to live very long time with only 1 game to choose i would pick this game.

This game is very well done for indie game. And still very active development and community

Well, before you ask for a free ride, write one yourself to the complexity and general timbre of this game and do so yourself. Remember that games like these take time to make, effort to balance out, and a lot of patience to get just right. I purchased this game because it forces me to adjust, think differently, and approach from many different angles.

This is a good game. Remember that information is vital in this game, and that you need to think out each step very carefully, as the AI progress keeps climbing... and you don't want them to get high up there. As the game says, you are outgunned, outclassed, outplanned, and outmanuvered... that is until you get a decent foothold and litter every system you take with AI ship parts.

This game is a blast with friends, btw.

This game is really awesome in my opinion. Very few games would have this complexity where the focus of the game isn't outpowering your opponents, it is rather to utilize strategics and the game mechanics to your advantage to win. Rather then encourage you to the direct route of amassing a large fleet and blasting everything away (believe me, that wont work) it encourages you to gather information, plan things out, and do things with more thought than a person would normally do. This is a great…