Grand strategy with turn-based tactical combat, set in a deep simulation of an entire solar system and its billions of inhabitants. You are the last of a murdered race, determined to unify or destroy the 8 others. But you must work from the shadows, using superior technology -- bring your cape and cowl.

Mission Briefing
Greetings, Hydral. I will be your computer for this "grand strategy campaign with turn-based tactical combat." I think that's code for "we're going to die."

Our solar system is vast and complicated, and I sense you are a little dimwitted -- so I tell you what, let's start with the simple stuff. Like escaping with this flagship you just hijacked from a bunch of angry robots. That seems important. I also think we can ingratiate ourselves to other races by bringing them the spacefaring technology they are struggling to develop. Then we'll see from there.

Please excuse my impertinence, but I believe you are the last of a murdered race, yes? My records note you Hydrals were the dictators of the solar system, so basically you had it coming. And by "it," I mean the moon that smacked into your homeworld. Hmm. So people really aren't going to like you until they get to know you. Well, your one advantage is only you can use the scattered remnants of advanced Hydral technology. Now all you need is a cape and cowl, and you're a superhero. Still, they outnumber us tens of trillions to one.

Look, I'm not going to tell you what to do. My understanding is that you're trying to form the solar system's first-and-last unified federation, and that's a noble enough cause. But right now nobody wants that except you, and you've got 8 very diverse, very angry races to either unify or exterminate. So... good luck with that. I'll help how I can.

Betrayal Mode reverses the usual game flow, making you a full planetary power trying to achieve solar domination -- adding a new layer of 4X onto the existing game. You gain the ability to command armadas and ground troops, and the meaning behind political deals is very much shifted. Rather than working toward unity, you attempt to destroy all your foes through subterfuge, war, and temporary alliances.

Invasion Mode sees you working with the other races to survive slaughter by a grave new threat, putting yet another major spin on things. Forming the federation isn't a priority when you are trying to keep a terror from consuming the entire system. 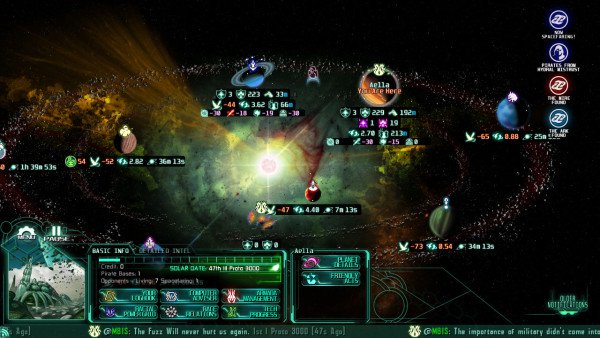 The Last Federation 2.0 arrives alongside the Betrayed Hope expansion this week as well. Here's what's been added or improved upon between 1.0 and this new release:

- Tons of improvements to GUI clarity, explanatory tooltips, etc.
- Auto-resolve option for battles.
- Permadeath made optional (and off by default).
- Awesome new ship graphics for during battles.
- New Burlust "Turmoil" mechanic.
- New ways to persuade races to join the federation.
- New actions that NPC-races take when it seems appropriate to them.
- Six new quests.
- Added player actions to support a ground invasions, oppose them, or simply start bombing stuff independently.
- Added the Ark and the Mire, two randomly seeded unique buildings that help make each game different.
- Major improvements to how RCI, Attitude, and Influence numbers work so that they make more sense to the player.
- Major revisions to widely-disliked missions like "Clean up AFA", "Deliver Spacefaring Technology", etc.
- Radical shifts to solar map pacing and many revisions to how actions work to increase player agency.
- New moddable "Bullet Pattern" engine that allows some really crazy new behaviors for enemy shots. Tons of new and revised bullet patterns.
- You can now do practice combats at the black market to try out tactics or just enjoy blowing up tons of ships.
- Substantial CPU/GPU performance improvements.
- Rebalancing both in combat and on the solar map.
- Multitudinous bugfixes.

For those interested in delving deeper, the full release notes from version 1.0 to 2.0 total more than 61,000 words.

A new chapter in The Last Federation saga -- coming this summer.

The Last Federation -- Out Today With 25% Off Launch Discount

At long last The Last Federation launches today! It's available on Steam, GOG, Humble Store, GamersGate, and Green Man Gaming for 25% off the standard...

Looks great! Any chance of seeing a tablet version of this?

I love how this looks- BUUUT is there any chance we can see some gameplay?

Cannot wait for this! You guys make awesome games!

I wonder if its turn based or real time...

I really hope you guys aren't taking on too many projects at once, but it's good to see new things.

At the moment, this is the only thing we are working on, and has been for a while now.

Twitter
Tags
Embed Buttons
Link to The Last Federation by selecting a button and using the embed code provided more...