The Perfect Dark engine is a modified version of that of GoldenEye 007, and many of the gameplay features are unchanged. For instance, the manual aiming system, originally inspired by Sega's Virtua Cop, is graphically enhanced but essentially the same. Players can crouch, duck and lean but notably there is still no ability to jump. Despite this, it is possible to drop from most ledges, a feature rarely used in GoldenEye 007. Most weapons have a finite magazine and must be reloaded after a certain number of shots. Interaction with the environment is via a single "Use" command, which opens doors, activates computers and so on. The engine never had an official name, its always been a upgrade from past game engines.

Perfect Dark is a subversive FPS.

::Perfect Dark::
Who remembers Perfect Dark? Rareware's swan song FPS? The game which broke the Nintendo 64's hardware like Bane broke Batman in Dark Knight Rises? The game which some people stopped playing when they discovered it had aliens in it? The game some people hate, some like, and others love with a religious passion? (Guilty as charged?) 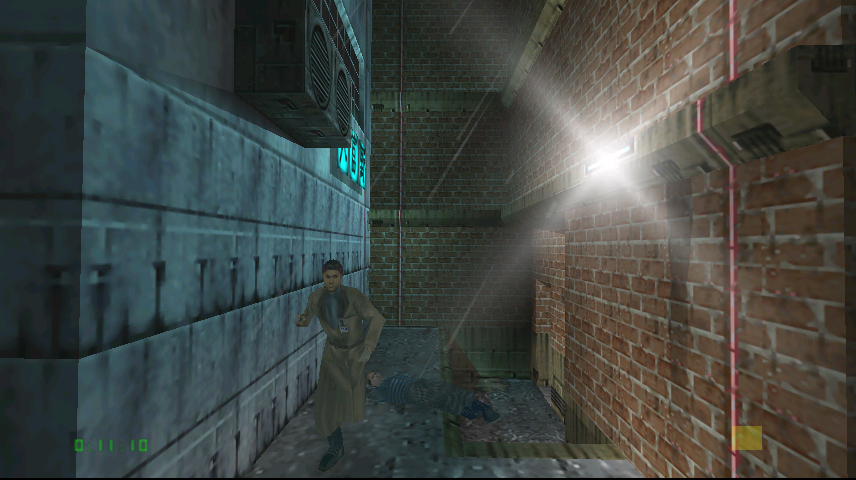 While Perfect Dark is frequently praised for things like dynamic lighting effects, comprehensive multiplayer and a vast array of weapons, the singleplayer is in fact a deeply subversive experience which deserves to be examined as an example of how to subvert the FPS genre via mechanics, not story. 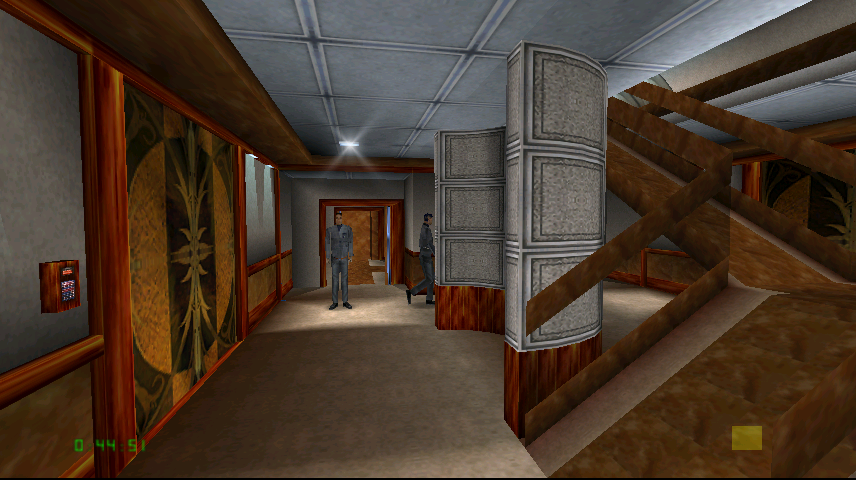 ::Perfect Dark vs Goldeneye::
In order to explain the basic nature of Perfect Dark's subversion, it is necessary to compare it to its predecessor. Goldeneye took the stylings of a Bond film and translated them into an FPS. Weapons fire big and loud, bullets spark when they hit wood, and enemies are plentiful, generally poor shots, and die for the satisfaction of the player. The only time they speak is to grunt when taking bullets to the chest. Killing people in Goldeneye FEELS GOOD. Killing forms the backbone of gameplay, and is euphoric. Just about anything which can be shot explodes in a classical fireball which was exaggerated in scale so Rareware could mask the switch between the 'live' model and the 'dead' husk. You are James Bond, mowing down waves of mooks as bullets spark off wooden surfaces just like the movie, and generally feeling good about yourself the entire time. In my opinion, no game since has recaptured the sheer impact of Goldeneye's combat. 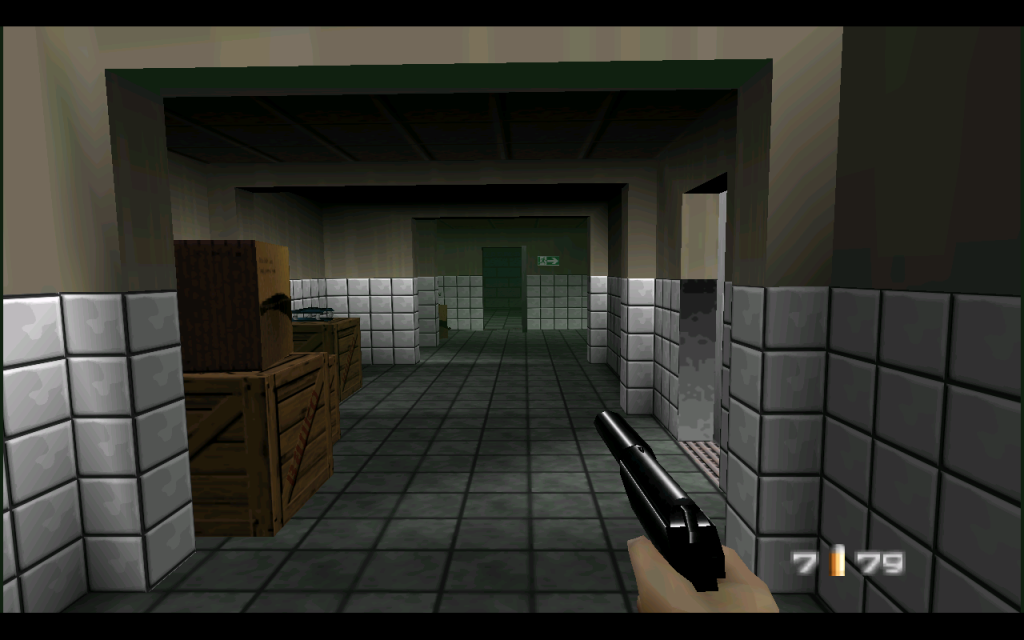 However, Perfect Dark is a very different creature. Weapons are more subtle, explosions are smaller, and your enemies are no longer silent. They get angry with you, they talk among themselves, and most importantly, they surrender. 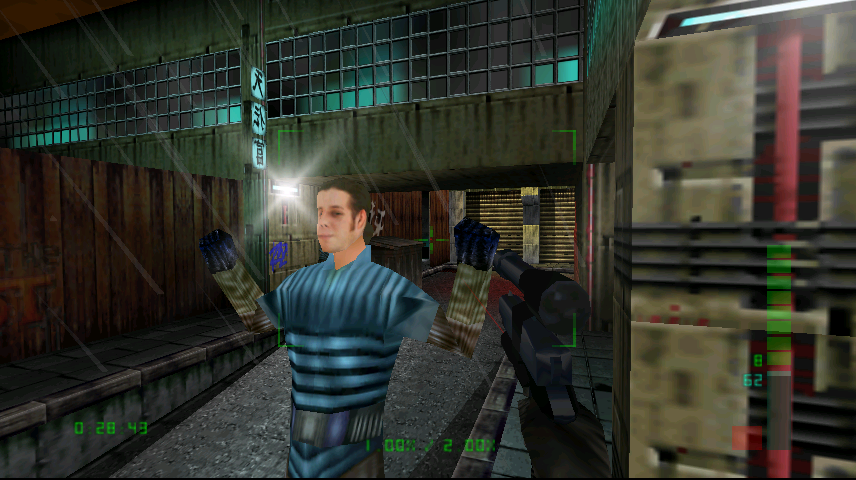 ::Non-Lethal Combat::
Perfect Dark has simple, but servicable non-lethal combat mechanics. Besides several missions when the player is provided with tranquilizing weapons, players can at all times perform standard punches, pistol whip NPC's, or alternatively disarm them. Disarming can be done via punching enemies or shooting the weapon from their hands, the latter requiring significant skill. Disarmed enemies will either pull a handgun, pull a second, or even third handgun, pick up a discarded weapon, attempt to attack the player with martial arts, or, quite commonly, they will simply surrender.

In almost every situation, killing is a choice. You kill in Perfect Dark because punching a squad of trained soldiers with assault rifles into unconsciousness is really, really difficult. (But still possible.) Action movies make taking on 5 armed guards with your bare hands look really easy. It isn't and Perfect Dark makes no attempt to cheat this basic reality.

However, it also is quite possible to rush enemies and snatch their weapons in rapid succession, and\or sneak up behind them and delivery an instant knockout punch.

Standard surrender behavior - Upon throwing their hands up, NPCs will plead, "Please, don't kill me," and "I'm just doing my job!"

Throwing down weapons - occasionally, enemies will simply throw their weapon, usually a handgun, down on the ground, then announce, "I don't like this anymore!"

::The Half Life of a Perfect Dark::
Fallout 3, New Vegas, and Skyrim are examples of popular FPS games (if we're willing to class Skyrim as an FPS) with enemies who beg for mercy, but their words always contradict their subsequent actions - which always involved attempting to kill you. In most combat oriented games, including the much praised Far Cry 3 and Spec Ops: The Line, anyone who is opposed to you must die.

Granted, Fallout 3 is hardly a subversive FPS. But it stands as an example of a half-implimented surrendering mechanic which could have profoundly influenced the gravity of the player's attempts to follow some sort of moral code.

Spec Ops - The Line is a simplistic cover-based third person shooter where you murder hundreds of nameless enemies in kill or be killed situations. The attempts to be deep and meaningful and criticize war are shoehorned into pretentious cutscenes.

You spend almost the entirety of The Line shooting people or inanimate objects.

Jason Brody from Far Cry 3 makes sacrifices to save the ones he loves - by shooting hundreds of basically identical pirates and running around the jungle turning native animals into wallets. The Jason Brody outside cutscenes wouldn't know anything about humanity, since the game mechanics never allow him to demonstrate basic human qualities like mercy and compassion.

Half Life 2 has a storyline which is supposedly about humanity and free will and how Gordon Freeman might be doing the world a disservice via his actions. But the gameplay consists entirely of shooting identical enemies and pressing colour-coded buttons. Your only choices consist of shooting enemies, blowing them up, throwing things at them, tricking them into fighting another AI faction, or killing by some other means.

It takes more than words to subvert or break new ground within a videogame genre. You can dress your murder simulation up in as many subversive colours as you like. Unless the gameplay mechanics speak differently, you're blowing hot air. And the opposite is true - if you design your game as some sort of anti-gun\anti-violence statement where using guns or violence invariably leads to bad things, you're just preaching - and presenting a warped view of reality in an attempt to push a point.

::Perfect Dark vs Goldeneye vs the FPS genre::
Which brings us back to Goldeneye. Killing in Goldeneye feels great. It feels, dare I say, empowering. It feels better than most other FPS games simply because its mechanics are so elegant. Killing in Perfect Dark is a deeply conflicted game mechanic. Enemies are real human beings with a very real fear of death. Some of them will fight you to the death no matter how many opportunities you give them to surrender. Many of them cry out in desperation when killed. But most importantly, a significant portion of them will surrender, throwing themselves upon your mercy. There is no scripted cutscene, or QTE prompt. The NPC merely surrenders in real time, and the choice of whether to shoot them or move along is entirely up to the player.

Playing Perfect Dark, I feel a pang of regret when I rarely, and accidently, shoot someone who has surrendered. Perfect Dark makes no attempt to comment upon your actions as a killer. It gives no speeches. It has no moralising. The only anti-gun sentiments come from members of Rareware who have occasionally expressed less than approving attitudes towards gun ownership. (This can reasonably be attributed to them being British, and the attitudes towards firearms in the UK.) Despite having no pretense of subverting anything, Perfect Dark subverts the first person shooter genre more powerfully than any other videogame I can name. For that, it deserves recognition, and it deserves praise. It gets plenty of praise from people like me for being a bloody amazing videogame. But it has been criminally ignored in the lively debate over subversive shooters.

Anyway, thanks for reading my fanboi rambling. I encourage you to break out the N64, buy the HD re-release ON XBLA, or use an emulator to play this classic, if you haven't already. Perfect Dark is a must-play FPS which deserves to be cherished for its achievements.

TimeSplitters is a first-person shooter developed by Free Radical Design (now known as Crytek UK) and published by Eidos, and the first game in the TimeSplitters...

TimeSplitters: Future Perfect is a 2005 first-person shooter video game developed by Free Radical Design and published by Electronic Arts for the GameCube...

TimeSplitters 2 is a first-person shooter video game developed by Free Radical Design and published by Eidos Interactive. It was released for the PlayStation...

Mod SDK & Community
Built a game for Perfect Dark Engine and want to support mods? Try mod.io, a cross-platform mod SDK created by Mod DB which makes it easy to get a mod community up and running in-game. Currently seeking games to integrate and promote