Ensemble Studios began work on their first fully 3D engine at the same time as their development of Age of Empires II: The Age of Kings. Named the BANG! Engine, this was announced in January 2001, for use in a new game codenamed RTSIII that eventually was revealed as Age of Mythology.

Age of Empires III uses a modified version of the BANG! engine.

Ladies and gents, it's time for the second in our series of five Friday Updates. This time we're going crusading.

1. Italians: Hire them
2. Crusaders: Convince them
3. Byzantines: Pretend you like them
4. Turks: Invest time in them
5. Saracens: Show them your power

Crusaders: Convince them
but don't expect them to last.

Imagine the 11th century. Think of the Castillians busy expelling the Moors from Iberia, think of the Normans clearing up the last remnants of Anglosaxon Britannia, or think about the papacy. The Pope had to see the Orthodox church split from the Catholic one in 1054, the constant insults by the Holy Roman Emperor, who surely wasn't as holy as he named himself to be, and adding to that the constant infighting among Catholic lords in Europe. While Catholicism was having trouble, Islam was skyrocketing. The Moors held on tight to their possessions in Iberia, and while the Seljuks and Fatimids were at war with one another in the Middle East, that didn't stop both of them from expanding their territory. The papacy then was in rather a tight spot, a situation where one Pope in particular had a solution for. Pope Urban II, having succesfully called on Chistendom before to aid in the Reconquista, saw his chances. Using the influence of the Church he would solve a number of his problems, but most of all initiate one of the most iconic historical events, the First Crusade.

This was but the first. The Crusade of 1096 was an astounding success. Not only did the Crusaders manage to capture the Holy Land, part of Syria and Armenia, they also greatly aided the Byzantines in pushing the Seljuks back further into Anatolia. The Second Crusade recaptured Edessa after the Seljuks conquered it, the Third Crusade, famously led by Richard I Lionheart of England was a succes in only limited ways, with Richard succesfully capturing Acre, but failing to take Jerusalem from Salah-al-Din. The Fourth Crusade was arguably even more of a failure, although the dissolution of the Byzantine Empire and formation of the Latin Empire that it resulted in was not inconvenient for the Italian city states. All these crusades though were united by one thing: the immense response that the people of Europe gave to the call of the papacy. Just a single word from the Pope could move thousands of Europeans away from their homes and to the other end of the well known world, from safety to hostility, from a calm and certain life to a daring adventure. This rhetoric was copied by the Kings of Jerusalem, even if they far less often acted on these words, for the sake of peace and stability in the Holy Land. 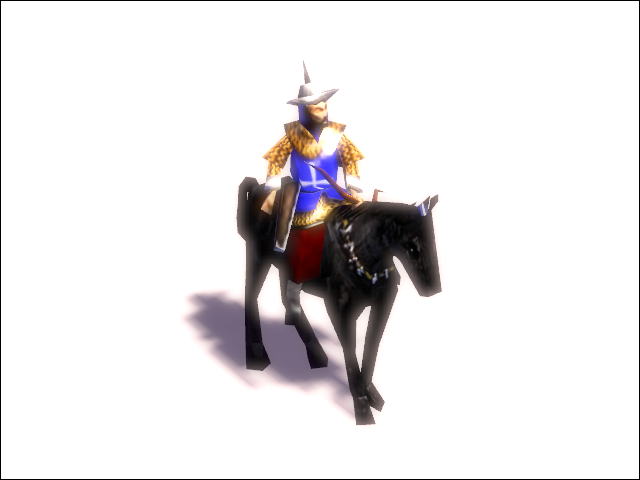 A natural consequence of the Crusades was the voluntary recruitment of thousands of Christians native to the Holy Land, as well as from other crusader states. In Knights and Barbarians there will be three of these units, called Auxilliaries. There's the Edessan Auxilliary, serving under the Count of Edessa before the fall of the city, now in service of the King of Jerusalem. The Edessan Auxilliary is an armoured swordsman, much like a regular Man-at-Arms, but like all Auxilliaries he is much stronger than his mainstream counterpart, though the lack of updates makes him and other Auxilliaries lose their advantage as the game progresses. The second on the list is the Lebanese Auxilliary. Once again stronger than it's counterpart, the Archer, early in the game but of less use in later ages, the Lebanese Auxilliary is drawn from Christianised Muslims in the Holy Land itself. The final Auxilliary unit available to the Crusaders is the Armenian Auxilliary. This swift mounted archer comes from the largely Christian region of Armenian Cilicia. 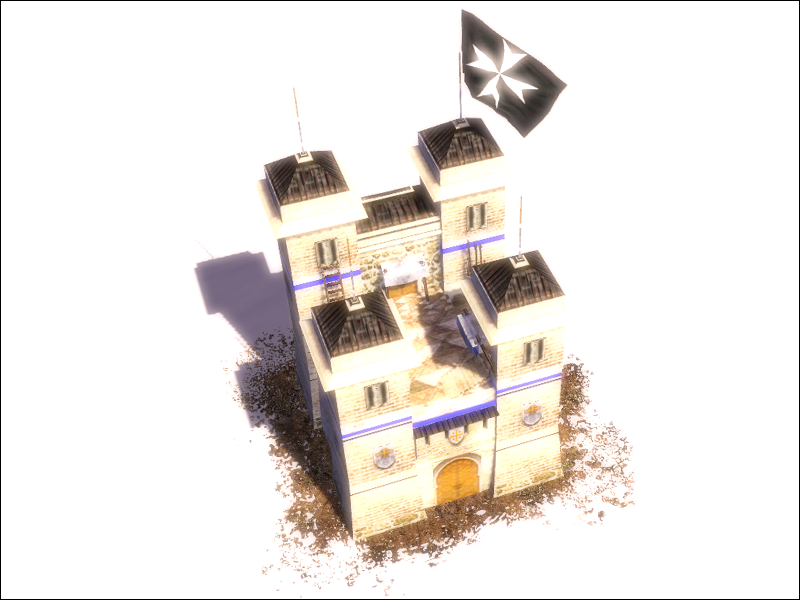 The Chapter House for the Crusaders. The Hospitalliers have been selected, as visible by the flag.

Jerusalem's military was solely dependant on European Knights. As would seem obvious, European and Middle Eastern styles of fighting were different entirely, but the concept of the armoured Knight wielding lances and swords, a very common idea in Europe, proved hugely effective in the Middle East. Where infantry and lighter cavalry fell pray to the skill the Saracens and Turks had in mounted archery, Knights remained largely unharmed, and as such they were hugely prized by the King. As the number of Knights Jerusalem could field through crusading nobles was nigh always too small to be effective, the Holy Land became a Mecca (if you'll excuse the pun) for Chivalric Orders such as the Templars and Hospitalliers. Even the Teutonic Knights, later rising to notoriety in the Baltic, were created to serve the King of Jerusalem and the pilgrims they were meant to protect, theoretically at least in equal measure. Of all the Crusading civs in Knights and Barbarians, the Crusaders will be most focused on the Chapter House feature. 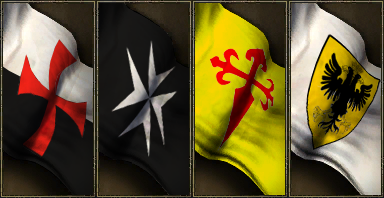 The available Knightly Orders for the Crusaders. From left to right: Templars, Hospitalliers, Santiago and Teutons

This is the first in a series of very lengthy and detailed Friday updates. In other words, they're pretty long and awesome! So sit back an relax while...

The Roman Legionarius released on ModDB!

The famous modification that swept Age of Mythology fans of the HeavenGames community has reached the doorstep of ModDB! The mod was originally released...

Guiding you to export your lovely model to Age of Empires III.

Brings the triumph and turmoil of some of history's greatest Asian civilizations to stunning life. Wielding the symbolic power of immense Wonders of the...

Adds a fourth mythology, the Atlanteans, to the existing Greek, Egyptian and Norse mythologies in Age of Mythology. A new single-player campaign will...

Age of Mythology is the third game from the Age of Empires Series, taking place in Mythical Times far before the rise of modern civilization. Players...

Age of Empires III: The WarChiefs

Experience the power of the War Chief in the new expansion for Age of Empires III! Play as one of three new civilizations - Aztec, Iroquois, or Sioux...

In this action adventure tale of historical fiction, players take on the role of Morgan Black and his family, struggling against the hostile wilderness...

Mod SDK & Community
Built a game for BANG! Engine and want to support mods? Try mod.io, a cross-platform mod SDK created by Mod DB which makes it easy to get a mod community up and running in-game. Currently seeking games to integrate and promote