The US Navy had difficulties in giving naval support in The War Against Global Terrorism, thus they cannot fully get in the combat as depicted in the original game, but the mysterious defense contractor and independent weapon developer Evans Corporation had offered a groundbreaking solution they need.

In one of the conference rooms in the White House sat in one of the white sofas quietly one person. His white uniform of admiral bore many medals for his service in the United States Navy, and his graying hair was proof he was serving for three decades at least. He was waiting already half an hour, but he was patient and quietly read in one of the papers he brought on this meeting with president. The rest was lying on the conference table before him.

Finally, the doors opened and the man in black suit and red tie came into the room. President was a man in his 50's, with the signs of white hair but still he had his original hair color. The bodyguards shut the doors behind, leaving the admiral and president alone in the room, and admiral stood up to shook hands with his supreme commander. Then they both sat on different sofas and looked on each other.
"Admiral Fox." Said the president and admiral put down the papers in his hands to others on the table.

"Mr. President, I am glad you accepted me so swiftly. There is an urgent matter we need to discuss." Fox took one report from the table and handed it to president, who grabbed it and opened it.
"Yes. You send a word it was about the GLA." Admiral nodded.

"Precisely. The situation in Africa, Middle East and Central Asia is going well. General Ironside and Chinese PLA is destroying dozen of GLA bases in month, but it is still harder to find the remaining GLA strongholds. It seems that they are starting changing positions to prevent detection. But the situation is more stable so we are sending in a transports with supplies for the citizens, and there is the part I wanted to discuss with you, sir." President nodded, but was silent so Fox continued.

"It seems that GLA gained a support in Somalia, and established there several hidden naval bases, which are used by pirates to raid our convoys with civilian supplies. While the fleet under my command is strong enough to protect them, we have problems with the allied shipyards in the area of Indian Ocean where can be maintained ships damaged in the struggles with GLA ships. Our enemy is targeting these naval yards, and using suicide bomber tactics they have damaged six ports, making them unsuitable for docking of our ships for seven months till they will be repaired. Our ships have to sail farer to be repaired, which will make the escorts of the convoys more thin." President frowned from thinking about this new unpleasant developments, and for a short time was silent, considering the options.

"Do you have any ideas how to resolve this problem, admiral?" Fox briefly didn't moved, but then he nodded, keeping his serious expression.
"Yes, Mr. President. I have two solutions. First is adopting a new kind of auxiliary vessel with the task of repairing the ships right on the seas, using the same repair cranes in shipyards and field factories, and accompanied with several repair drones to fasten the process."

"The second solution is more daring, but can prove more beneficial for our naval forces." he continues. "The solution is that we will develop a shipyards build on the seas, where they can be more better protected then on shores. By cutting the connections from the land, the suicide bombers and infiltrators will not be able to get to the docks, and ships and aircraft will be engaged before they will get too close. However, the problem lies in the method of how to build these floating shipyards. I have contacted Evans Corporation, the defense contractor, and discussed with them about this. They have the solution we need, the details are in the papers that I will explain later. I was told they would be willing to supervise this project and give us the design if they will be given an official contract. This solution can give our ships option to be resupplied right at the area of their operation, similar to our bases on surface. With our great naval support it can give us the advantage against GLA we need to defeat in almost all operation theater." Admiral ended his speech, and led the president think about the possibilities he have gave to him. The black-suited man was thinking for few minutes, and Fox was all the time silent and patient. It was one of his characteristic traits.

Then finally president moved and looked into Fox's eyes.
"Fine, Admiral. i like them both, but we will have to inform the General Staff to discuss it further, but you have my support, admiral." Admiral nodded and opened another of the papers.
"Thank you, Mr. President. If you will allow, there are several recommendations about this which I can present to you now before we will inform the General Staff, so you will be more in the picture of the situation." President nodded and Admiral Fox started speaking.

Today we will show you some US auxiliaries, which are still very important for your sea operations. With these, all basic naval units of USA have been shown to you. So the next are Chinese and GLA ships? Well, stay tuned.

As you can see we're changing our update format to also include more lore and fluff bits to explain what's going on behind the new arising conflict which is the focus of this mod. The US Navy had difficulties in giving naval support in The War Against Global Terrorism, thus they cannot fully get in the combat as depicted in the original game, but the mysterious defense contractor and independent weapon developer Evans Corporation had offered a groundbreaking solution they need. Who is actually the Evans Corp? Are they taking a major part in this conflict? Stay tuned for the future updates. 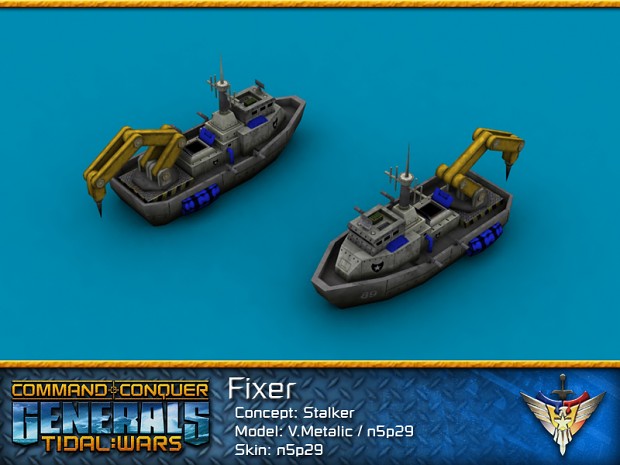 Beside the warships, which are at the forefront of the naval engagements and shore operations, also exists non-combat vessels with just as important role as destroyers and capital ships. One of these ships is Fixer trawler. Initially a small ship mostly used for transporting cargo and supplies, US Navy took the design and re-designed it to fill the role of mobile repair station, as the causalities sustained by GLA increased rapidly, especially the sinking of USS Reagan by GLA-captured Particle Cannon. Fixer received armor protection to sustain minor damage, but still it is the weakest ship in US arsenal, and to fulfill it's duty the ship was outfitted with repair crane, which can extend to considerable distances to repair nearby damaged ships. Fixer also houses a small supply of Repair Drones, which are designed to fasten the repairing of not only the ships, but also aircraft and helicopters. 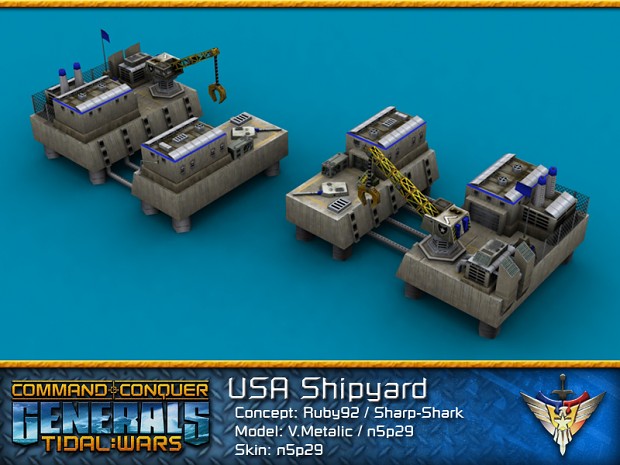 With the start of the construction of large warships in 19th century, all countries were building large shipyards to produce these massive ships of war. USA, who is in present producing and maintaining the largest vessels in the world, the battleships and aircraft carriers, has under control many shipyards capable of keeping these giants operational, or when required creating them. Thanks to Evans Corporation, by using both the high technology in fabricated building and easy-to-assemble construction methods, United States Navy is capable of quickly establishing the small "artificial islands" shipyards near the shores of their controlled lands, where their ships are repaired, or even produced when required, to keep their dominance over the region. However it's still a mystery how these sites can be constructed with such speed.

Also check the cousin mod NProject Mod. The new Version 2.8 have been released some time ago.

He was serving for thirty decades at LEAST?

sorry it was a small error. it have been fixed now.
I0.kym-cdn.com