A quick briefing of the changes to Star Wars Interregnum and the Enhanced 4X Mod this month. Warning: Includes Starbases and Mandalorians!

Hello players of Sins of a Solar Empire,

It is my pleasure to announce the release of another pair of updates to Star Wars: Interregnum and the Enhanced 4X Mod. Both mods received a nice common sense rework to how Starbases work. Interregnum meanwhile has unleashed the highly anticipated Mandalorian Raiders as a replacement to the pirates, providing players with new enemies and ships to acquire. 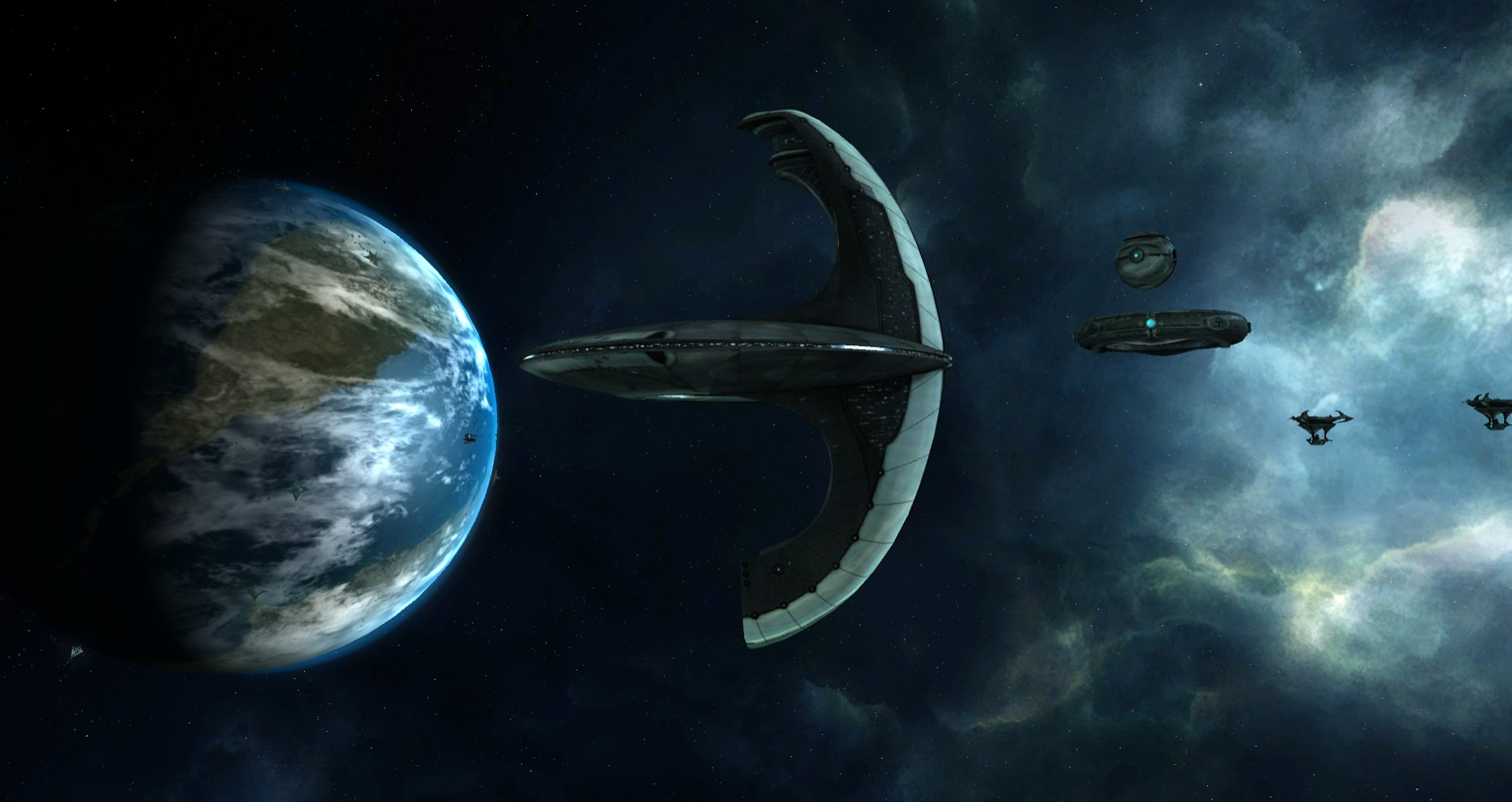 While the main purpose of the Enhanced 4X mod is to improve the non-combat aspects of the game, Starbases was one area that needed just a bit of polishing up. The main problem was that some upgrades were so marginal or situational, it was hard to use one of your 8 upgrade slots on them. The vast majority of players seemed to just unlock the combat upgrades and leave the rest alone.

This update will make some of the secondary Starbase upgrades more accessible. This was done via a few methods. The largest is that some starbase abilities that used to require an upgrade slot now only require research. This means all Starbases will have the ability unlocked after it is researched without any resources or upgrade points required.

Second, some upgrades were combined into one, freeing up more slots and making that upgrade much more cost effective. The Advent Starbase for example can now spread culture and increase allegiance with just one upgrade, while the Vasari colony pod ability was combined with bombardment immunity.

Third, some upgrades, like the TEC Starbase's Ship Production, was reduced in price, so it is more competitive with other upgrades. A full list of changes can be seen in the mod's readme, and a minimod to allow Starbases to get all their upgrades will be released shortly as well. 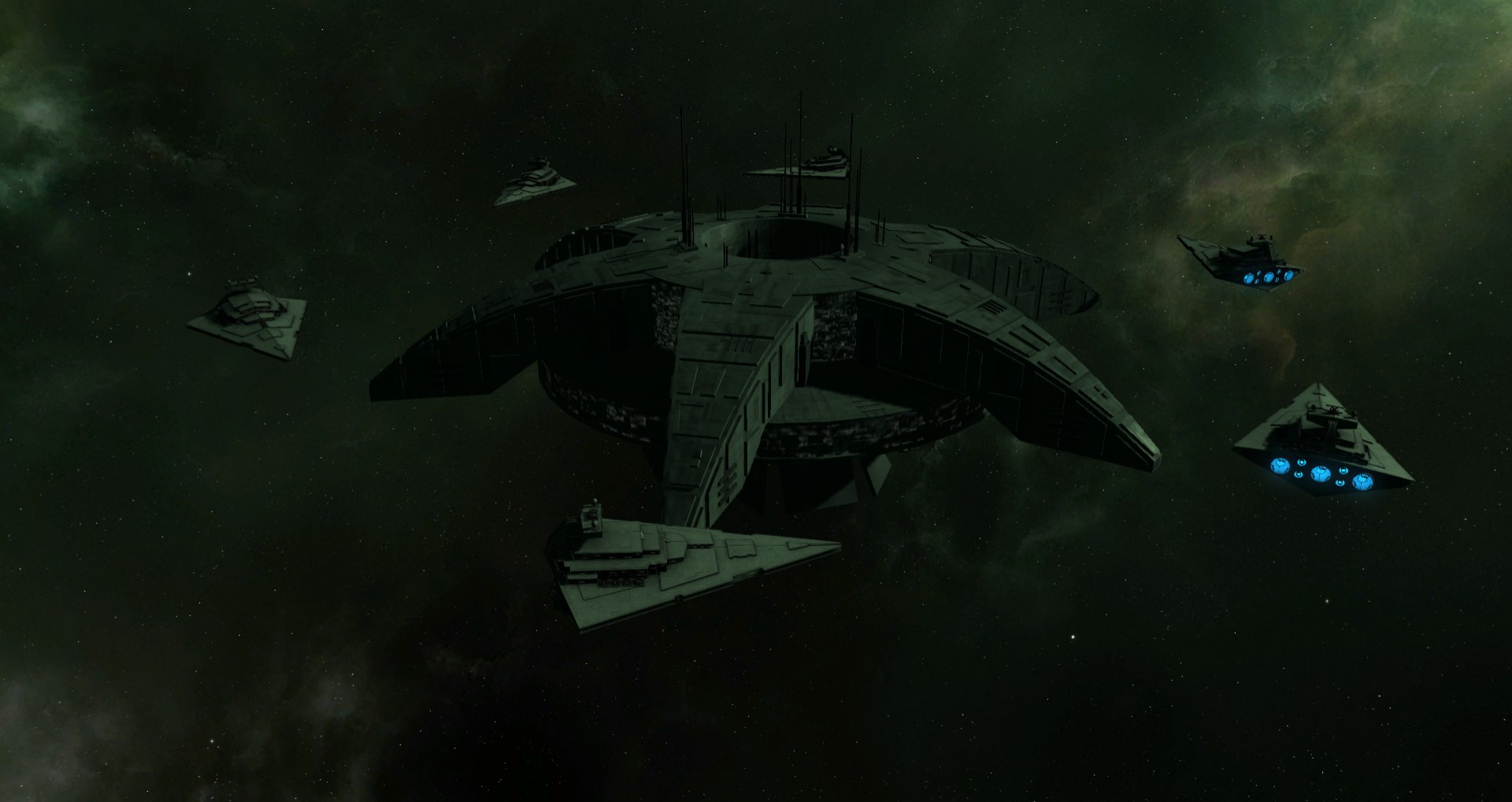 Similar changes were made in Star Wars: Interregnum, with the Rebel's Listening Post and the Empire's Resupply Fleet abilities becoming research only, and the Rebel's "Starfighter Swarm" starbase ability now getting unlocked with the standard hangar upgrades. 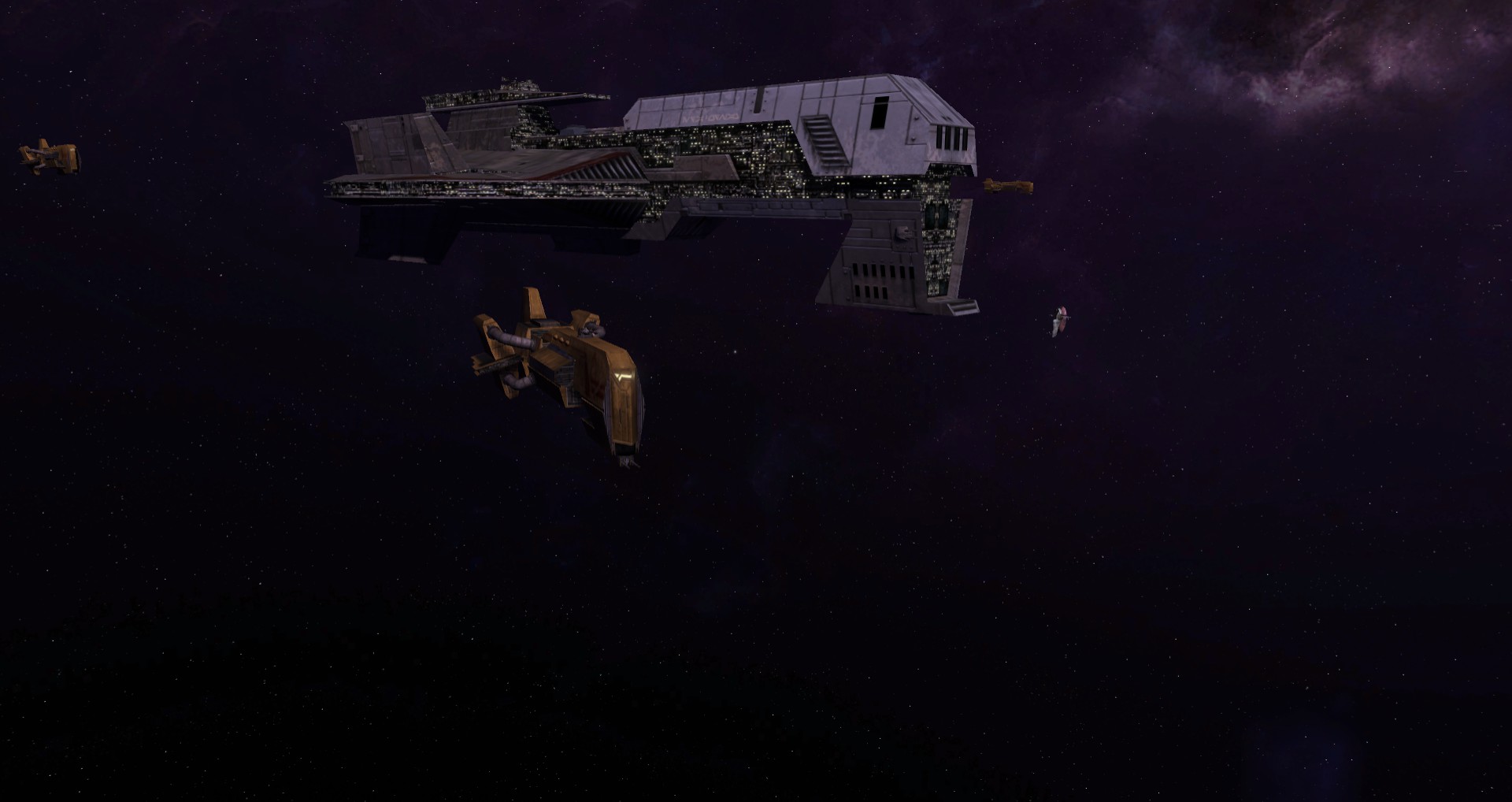 The main draw of this update however is the Mandalorian Raiders for Interregnum. These powerful mercenaries are basically the most powerful "minor faction" in the mod, acting as an extremely unique version of the Pirates in Sins of a Solar Empire. While they will periodically attack players in the game, any Empire that can conquer their bases or even their homeworld (Mandalore) will be able to use their unique ships in battle.

Doing so will not be easy however. The Mandalorians use a mix of their own designs, including the Crusader Corvette, Scyk Fighter and powerful Keldabe battleships, as well as older Clone Wars vessels that have been acquired, including Acclamator Assault Ships, Dreadnaught Heavy Cruisers and Venator Star Destroyers. 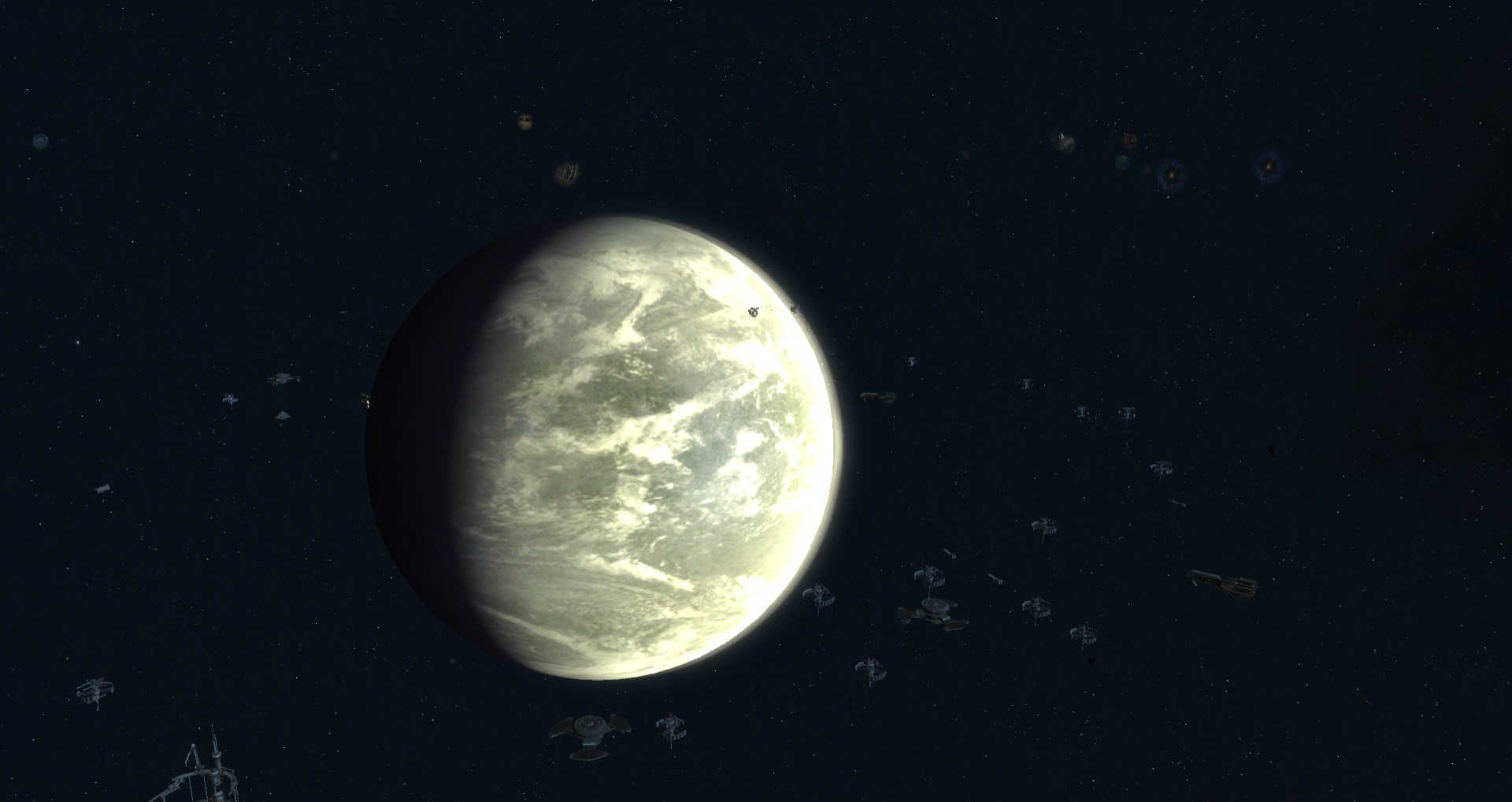 You can find Mandalorians on almost all maps, either from their colony bases or from Mandalore herself (pictured above). The colony bases are now proper planets, and while less defended only allow a few Mandalorian ships to be acquired. They will also provide a single Keldabe battleship as a special "Captain" hero like unit. The planet itself will always have a bonus to ship production and planet defense due to the presence of Mandalorian warriors you can recruit.

Mandalore itself has a chance to appear instead of a base on most maps. It is much more heavily defended, with many capitalships as well as a powerful frigate fleet and a multitude of defense platforms. Conquering it however will let you produce as many Mandalorian ships as you desire. It also contains a very rare resource, Beskar, one of the best Metals in the Star Wars Universe, which greatly enhances your ship construction as well as Metal and Trade income.

As most of you are probably aware, December always brings a multitude of major events related to the mod. Christmas and other winter holidays are in full swing, Rogue One has just hit theaters, and Moddb's own Mod of the Year contest is in full swing. Thanks to your tremendous support, Interregnum has made the Top 100 list for the third year in a row. We are incredibly thankful for your support, and if you enjoy this update and want to see more from us, please consider voting for us in these last days of the final round!

I hope everyone has a wonderful holiday and enjoys these updates! 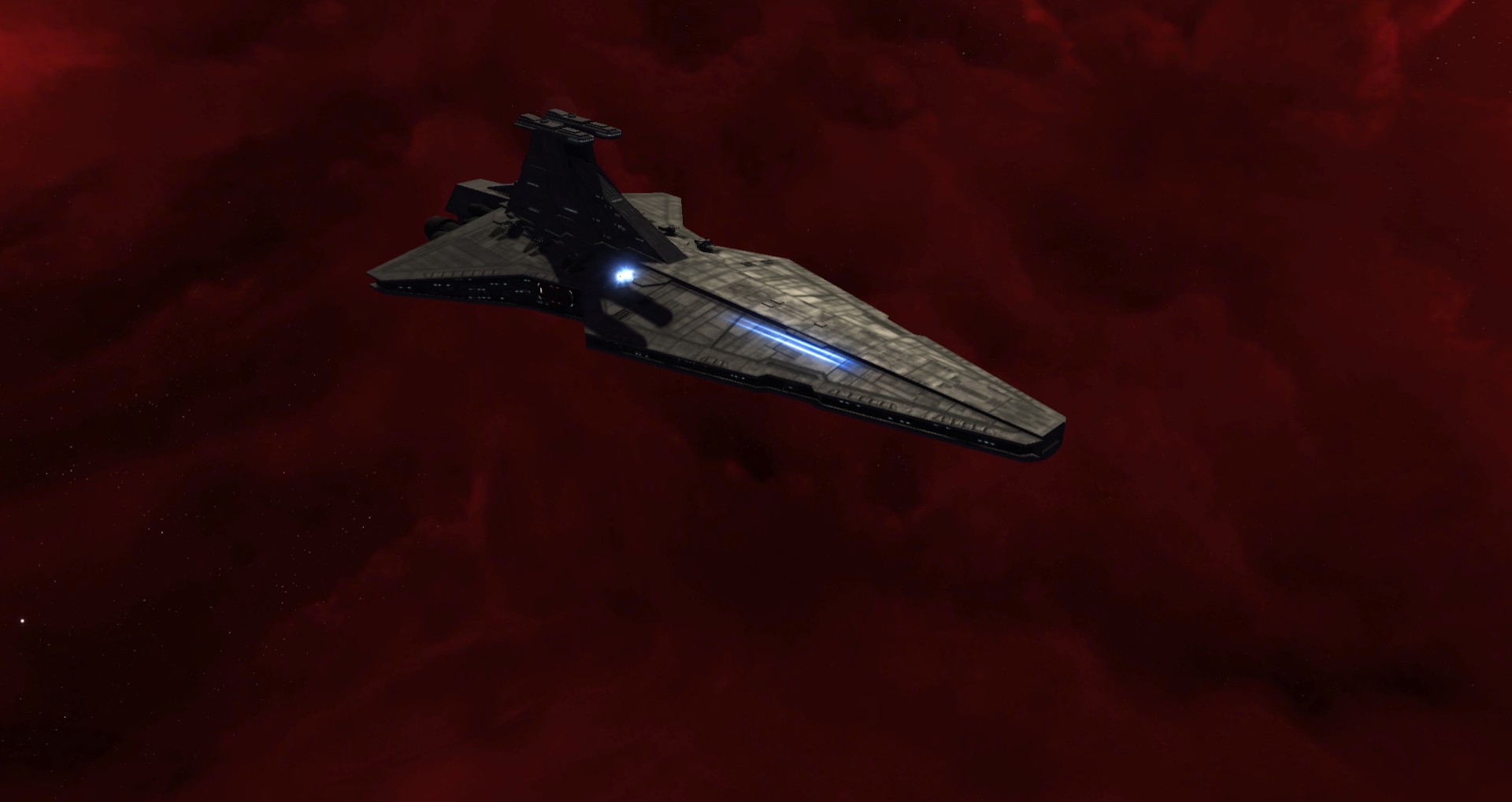 You can download E4X 1.82 here (not needed if you get Interregnum):

Nice, keep up the good work!
A wonderful holiday to you all as well

Mandalore is one of the starting planets in the galaxy far, far away map. I can only guess that you have changed it in this update?

Yes. Ord Mantell was made a new starting planet to replace it.

You have already earned the vote. But now you have my loyalty for allowing me to use the mandalorians <3

Yay! Can't wait to see more of this develop.

I love this mod and I love you for continuing to update it and make it more awesome!

Hey goa im having a glitch and crash but only with interregnum some of the panels will white out after i click them, and the game crashes after only a minute or too. Any ideas?

Hi Goa just to confirm I downloaded Interregnum 3.3 on Dec 16. It should be the same that the article is talking about, right? I played a game and saw the Mandalorians but did not notice any changes for the starbases. I played as the Rebel Alliance.

It's not an immediately obvious change, but you should no longer have the "Scramble Fighter" and "Listening Post" upgrades on the starbase itself. These are now tied to research and for Scramble Fighter the hangar upgrades.

The end result is abilities most people probably skipped over are more likely to be used now.

Thank you for the continued updates, this is still my favorite Star Wars mod of the big three (Interregnum, Ascendancy, SoGE) so it's good to see it regularly updated with Sins. +1 for first Keldabe in Sins.

Hello there,
Fantastic work with this mod and thank you for continuing to improve it. This is one of the reasons i decided to come back to Sins after so many years.

I am curious if this mod is compatible with some of the graphics mini mods available i.e. volumetric or the unofficial GFX mod?

Thanks for the kind words. :-)

You can try using those mods, so long as they are below E4X/Interregnum on the mod order. However, they may not work very well, depending on how well they were coded. If the changes required adjusting the individual ship files instead of replacing existing art content, you may not notice as much of a difference.

Thanks for the quick reply! I'll give it a whirl but it was mainly out of curiosity I asked. the mod itself is is beautiful alone. Again, thank you for the hard work :)

Hiya. Quick question, can you use the Mandalorians in this mod or are they just pirates which you can't use? I'm trying to find a mod that you can use Mandos in but I can't find any. Do you know any good ones if this doesn't let you use them?

The Mandalorians are not a full playable faction at this time, but if you capture their planets as any other faction, you can get the ability to build some or all of their ships.

Currently there is no mod for Sins that has a playable Mandalorian faction. This one has the most Mandalorian units of any of them.

Mod of the Year, New, Release