In which level eight is worked on; a pebble-bed is textured; a "distance-splatting" shader is made; broken stones are added at cliff-side bases; cliff-faces are detailed; a tomb interior is begun; some footstep-sounds are made; a shader-change incurs tweaks to an extant level; and saving within a specific feature is handled.

This week's screenshot shows a start on an interior portion of the new level: 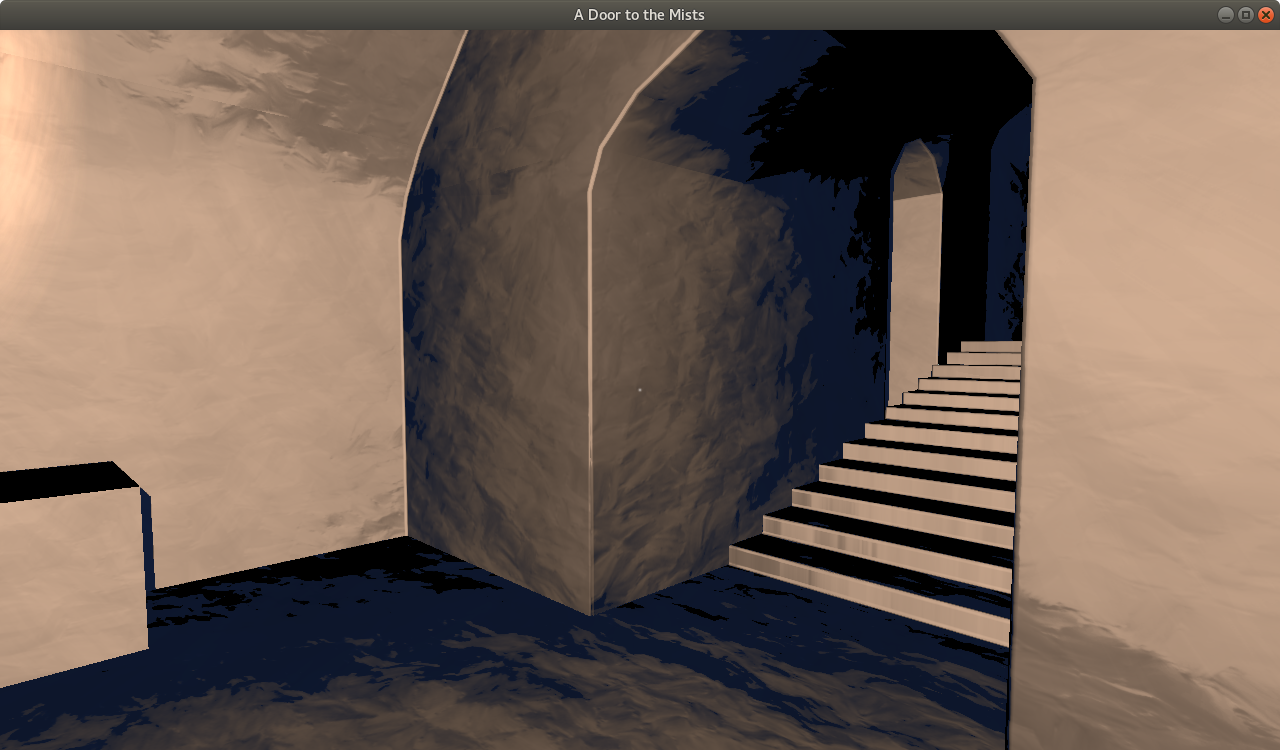 For the most part, the work of the week just past was given to such level-construction, with just one or two things done outside of that:

In last week's blog post I showed, I believe, an image of the gorge in which level eight is set. In that image the ground was still rather unfinished--it had only stand-in texturing. In the week just past, then, I set about texturing it properly.

To start with, the main of this chasm-floor is covered in small, lightly-coloured pebbles.

As these pebbles are quite small, many, fiddly, and overlay each other, I didn't make the relevant textures entirely by hand. Instead, what I did was to build a small program that randomly placed pebble-images within my textures, drawn from a set that I made for the purpose. This (aided by some manual placement to cover gaps that random placement wasn't quickly hitting) produced a fairly good pebble-surface, I feel!

However, I wasn't happy with the effect produced by simply applying these textures in-level: as I recall it became somewhat busy in the distance, and furthermore, didn't fit that "somewhat painted" aesthetic that I'm aiming for.

So, I created a new variant-shader that "splats" textures based on distance from the player. This allows me to shade between the detailed pebbles at close range and something more abstract and less busy further out--a little as one might paint such a surface, I feel.

And overall, I'm fairly happy with the result! ^_^ 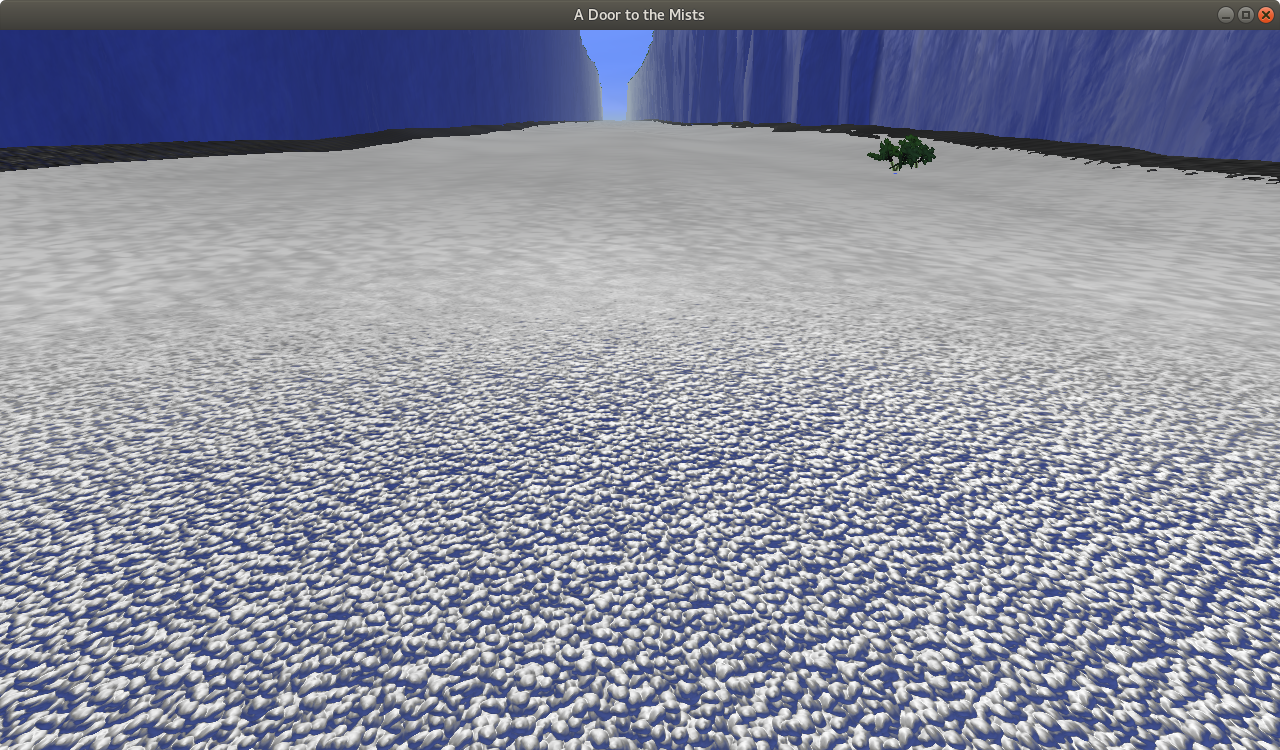 At the bases of the cliff-sides can be found a band of broken stone. This I've started, but not yet finished.

In particular, I struggled in the week just past to get the edging of it to look good, to not reveal the underlying geometry by cutting off abruptly; none of my shaders quite did what I wanted, I fear. I could have manually edged it, creating a geometric outline of the outermost stones--but there are a lot of stones, and my heart rebelled at the thought.

However, I think that I may have an idea that could work... 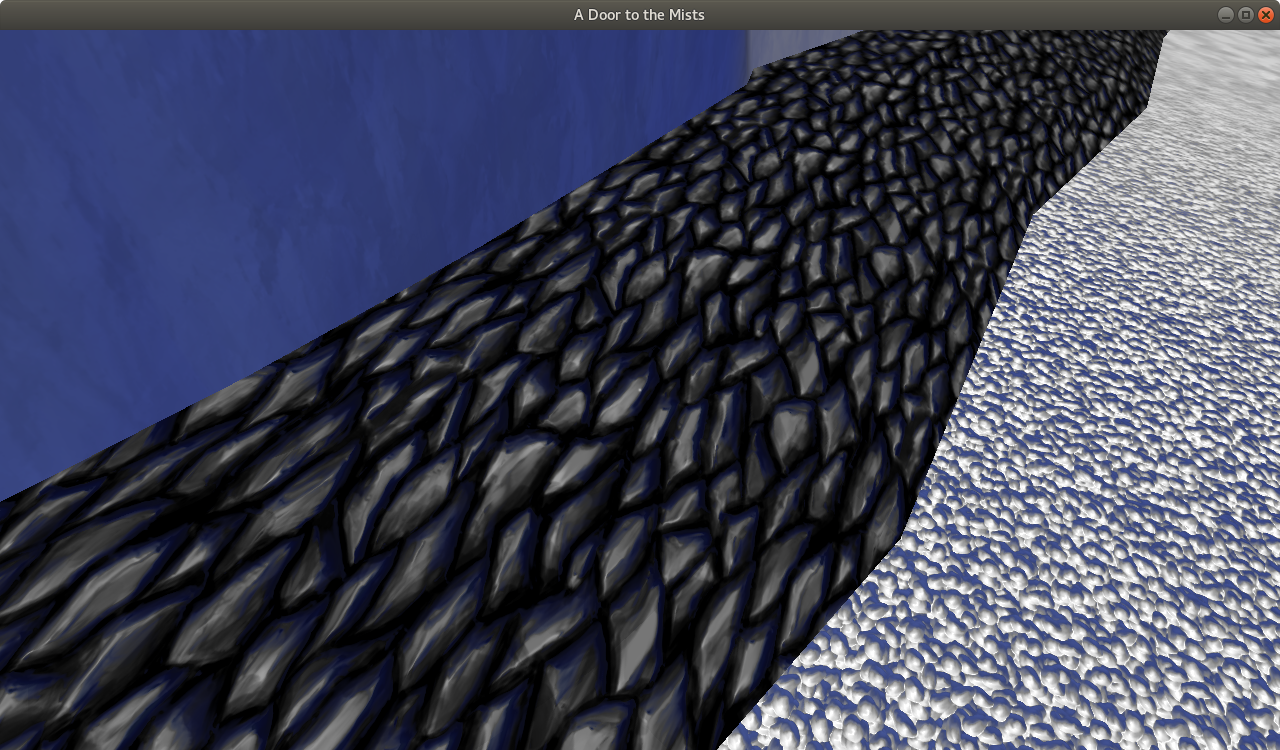 The cliff-side itself also saw a bit of work in the week just past. Specifically, I added some detail to it within the region accessible by the player. It's subtle, but I think that it makes the surface a little less uniform, and thus a little more convincing. 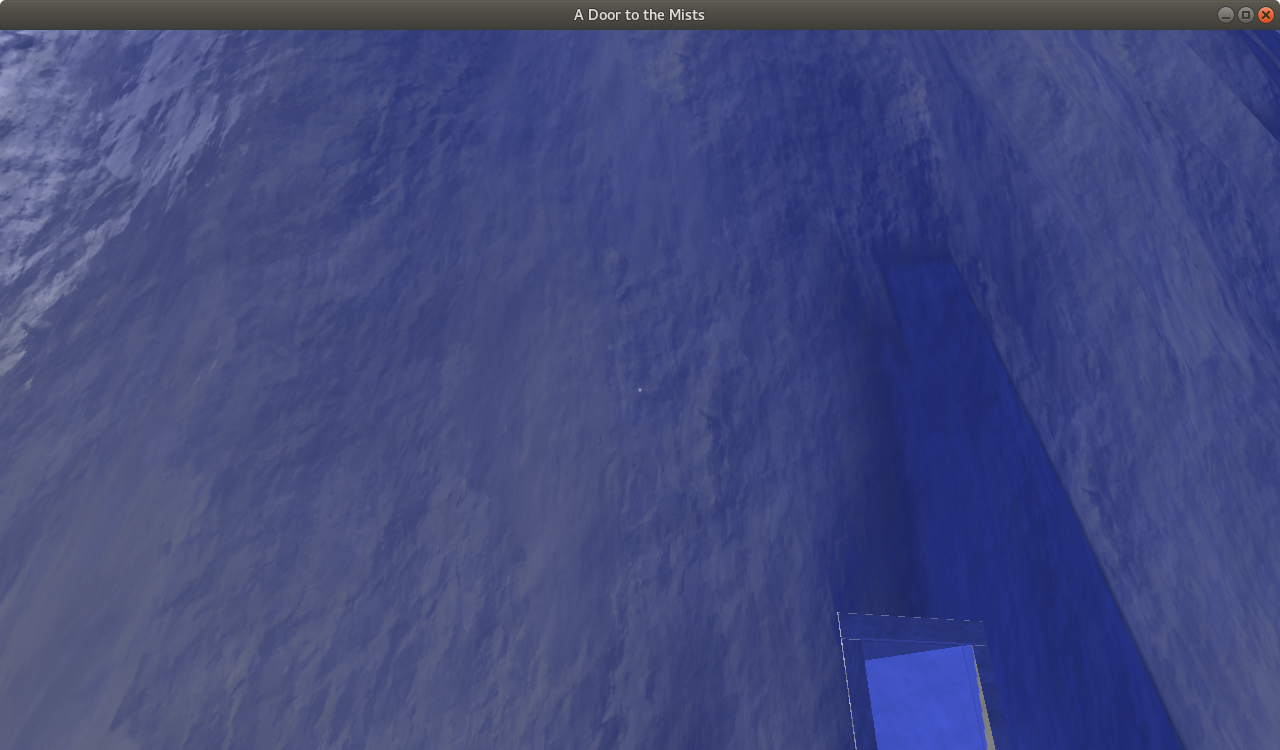 As shown in the main screenshot above, I also began working on the interior that's accessed from the cliff-side doorway: a king's tomb, shaped from pre-existing hollows in the stone.

For now, only the basic form of this is in place: there's a fair bit of detail and texturing as-yet to be done. Not to mention the various contents of its rooms! 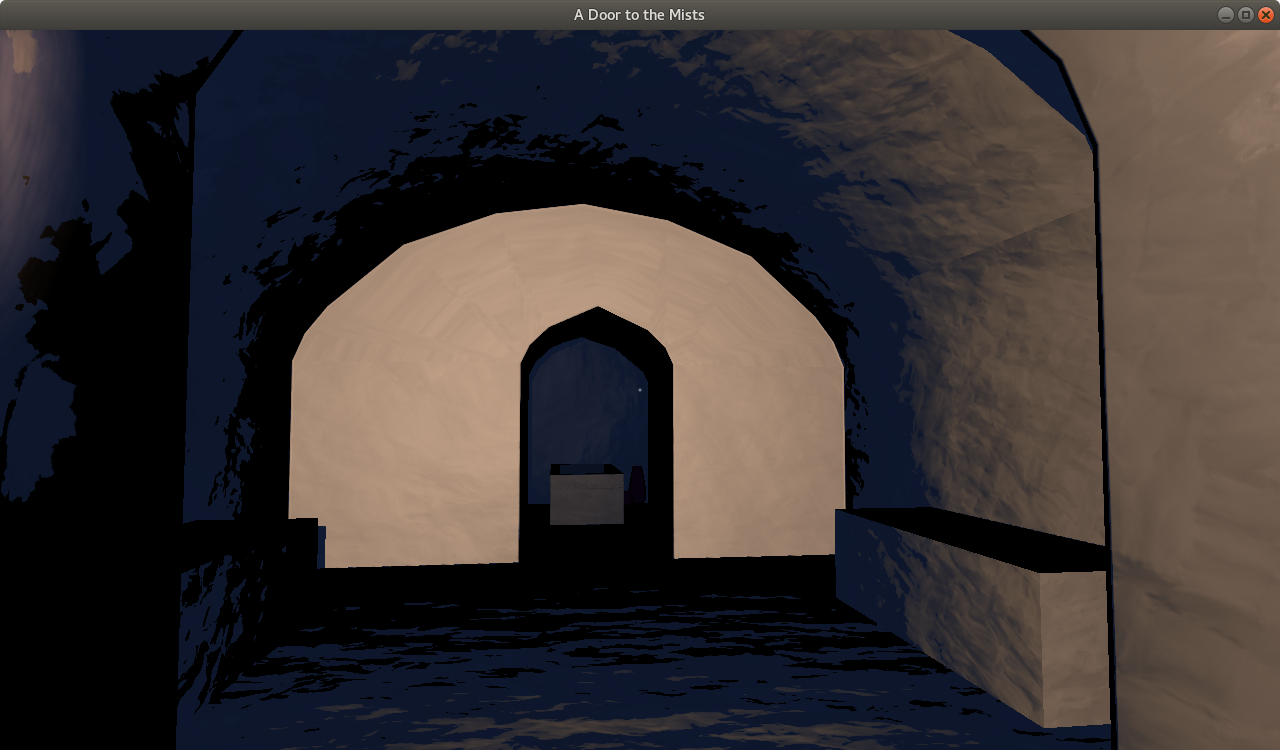 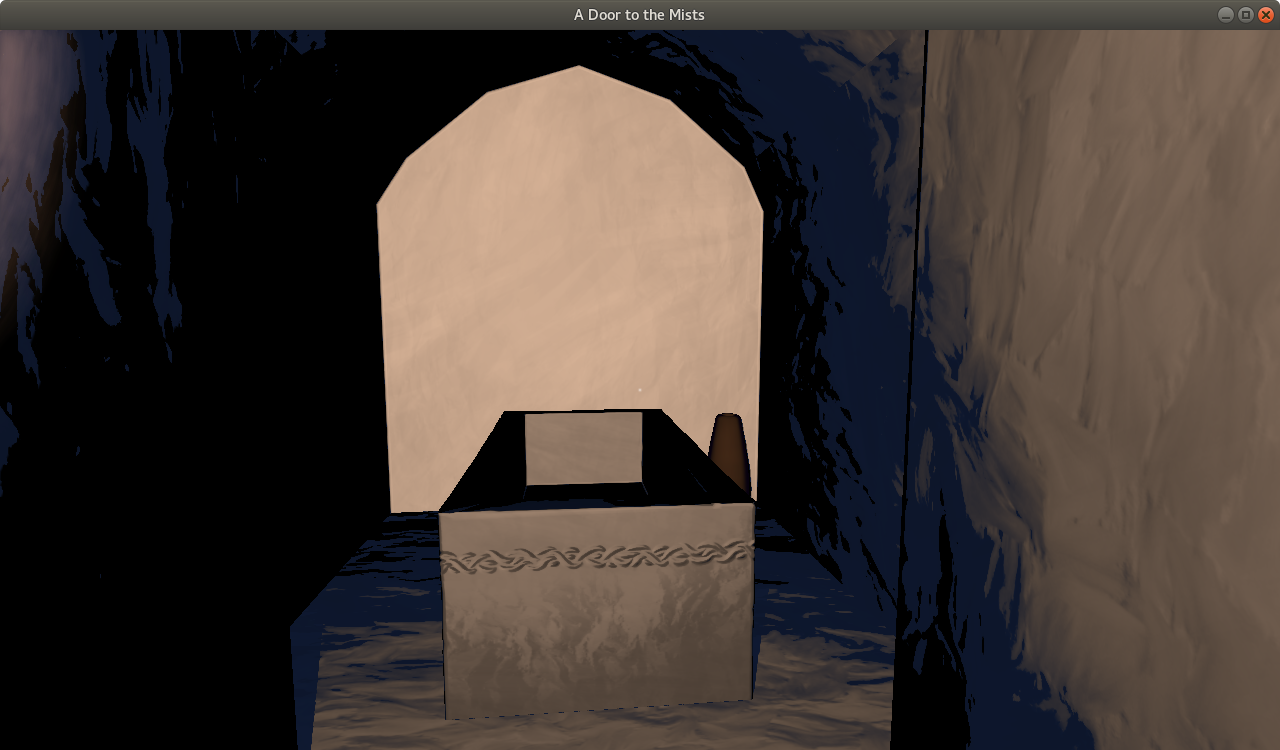 Moving to audio, I made a set of footstep-sounds for the player's movement over the pebbles of the chasm. I'm not sure that I'm happy with these, but at the least they'll do for now, I think.

And finally, two sets of changes were made in places other than level eight:

First, part of the work on the cliff-face involved changes being made to the sunlight-version of the "mural" shader. This, however, incurred some changes to the carpets in level six, which also used that shader. Thankfully these changes were fairly quick and easy to do, I believe!

And second, I attended to the matter of saving the game while standing within level-six's "mist feature"--something that I hadn't properly dealt with previously. Thankfully, this likewise proved fairly quick and easy to do, I believe!