"Adventure is my path"

(THIS GAME IS CANCELLED, ALAS.)

"The Arcaniary. The Blue Mists. The World Apart. And many other names besides. It's the place magic comes from, the place spell-crafters move in and out of. It's always described as blue mist, and impossible rock formations, and blazing-starred skies.

"What greater call to an adventurer? What an adventure it would be to visit such a place! What would I discover there, and see? For almost as long as I've adventured--maybe longer--I've wanted to explore its depths. 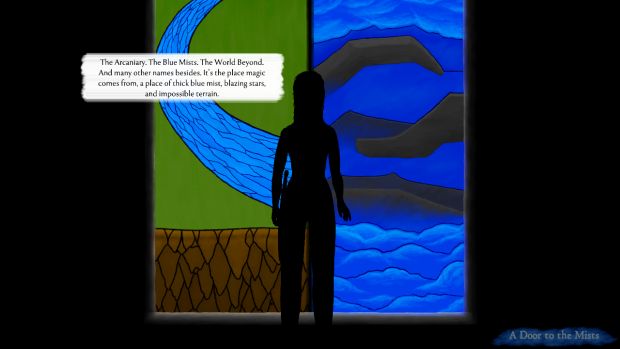 "But only spell-weavers can enter it, and to take up magic requires a sacrifice. When one is young, this could be one's memories, or ties to family, even physical life, or something else besides. But once one has found a path in life, only the sacrifice of that path will do. To go back on the sacrifice would bring death.

My path is adventuring. It always has been; it burned in my blood the day I was born. To learn magic, I would have to give up adventuring, my life--the very reason that I want to enter the other world.

"But in a tavern recently I heard a story, of a lost city and a door that led directly into the Mists. No magic training. No sacrifice. It could be just a story, or its meaning lost over the centuries. Even if it is, chasing it sounds like an adventure in itself.

A Door to the Mists is a first-person video game in a fantasy setting, featuring exploration, traversal, puzzle-solving, and sparse combat.

This week, in place of a screenshot, I will simply post the logo for A Door to the Mists:

Let it be a book-end to the project.

Because, with a heavy heart, I hereby announce that A Door to the Mists... is cancelled.

In short, with no publishers expressing interest in taking on and thus supporting the project, I fear that it's no longer viable for me.

Should that someday change, perhaps I will take it up again, and indeed I've thrown almost nothing away, I believe. But as things stand I've boxed it up, and shelved it.

A Door to the Mists has been my primary project for... well, for a long time now. It has been, and remains, something special to me.

And I've learned, I believe, over the course of my work on it. I have (I hope) a better appreciation for scope. I've improved (I think, at least) in various skills. And I've developed code-modules that remain useful to me--in some cases very much so.

In closing the project, let me leave you with one more thing:

Before I began A Door to the Mists, before indeed I found the concept for it, I wrote a short story in its setting. Indeed, it was in this story that I originally found the setting.

As the story was written for a small writing competition on a forum that I frequent, I made it freely available, and so first publication was out of the window.

But with A Door to the Mists I've long had it in mind to include this story as a freebie, and to that end put together a PDF e-book version. After all, it may not be directly part of the story, but it does take place in the same setting, and involves the mist-world.

And so, with A Door to the Mists cancelled, let me at least release that story today. I will likely post tweet it out too, but here is a link at which the story should be available:
Thaumaturge-art.itch.io

So, I've mentioned before, I believe, that I've been working on a pivot-project. I'm still not yet ready to reveal it, and in any case I don't want to distract too much from A Door to the Mists in this post. Let me for now only say, then, that I feel that it's progressing, and that I want to start up a dev-log for it sometime soon.

And finally, let me say thank you, to all of you who have read any of these devlog posts. Know that it has been appreciated.

So, that, then, is all--for this week, and for these devlog posts, it would seem. Stay well, and thank you for reading! ^_^

A Period of Quiet

In which mist is touched-up; a sarcophagus is labelled and described; a king is named; changes are made to project-activity; and a hiatus is announced.

In which natural cavities and their blockage are depicted; a logogram is made; labels and descriptions are written for logograms; a mist-effect is added...

In which a texturing error is fixed; a line of graffiti is added; broken statuary is made and placed; identifying signs are set above tomb entrances...

In which murals are made or polished; examination objects and logic are put in place for said murals, and for a piece of graffiti; text is written for...

Sorry for the late reply, but thank you! I appreciate that. ^_^

wow very awesome when will full game be out?

I'm so sorry that I took this long to respond--I only just noticed this comment! ^^;

As to when the full game will be out, I don't know--right now it's a matter of "it's done when it's done"!

Indie
Twitter
Tags
Embed Buttons
Link to A Door to the Mists by selecting a button and using the embed code provided more...