In which the pitch deck continues to see work; the pitch email is begun; bug-fixes are made; the level-five upper-puzzle gains some "nudges"; and mouse-wheel scrolling is better-supported.

This week's screenshot shows another look at the pitch-deck that I've been working on: 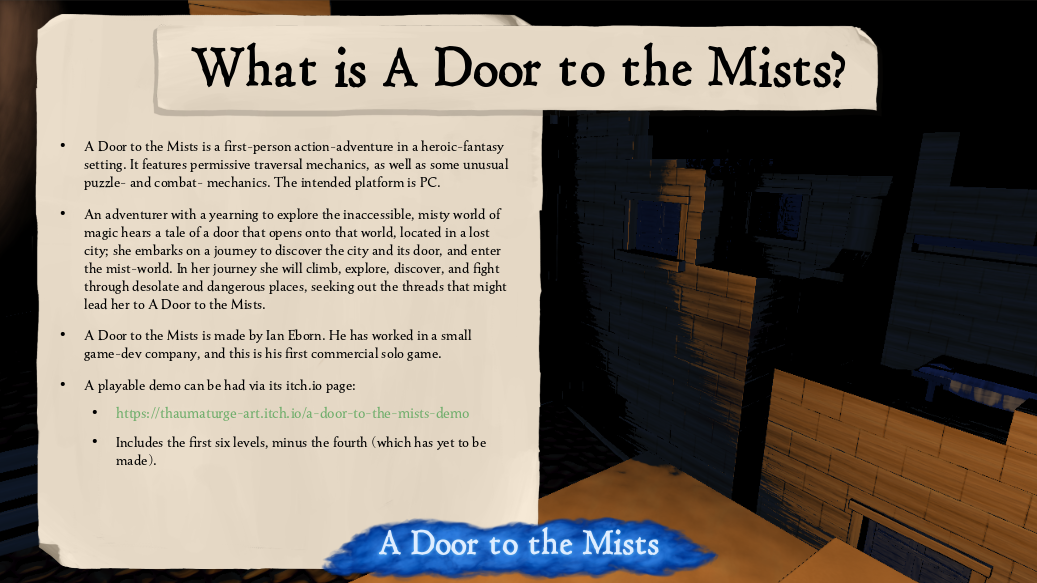 As you may imagine, much of the work of the week just past was given to preparations for making a publisher pitch, I believe. Still, a few other things were done too!

To start with, the pitch.

As shown above, I continued work on the pitch-deck in the week just past. Part of this was simply continuing to fill out its content--a process that I think that I have all but done; I have just a few small changes remaining in mind. But another part was reworking the look and feel of the thing: having encountered further examples of pitch decks, I came to feel that what I had was a little insipid. I thus reworked it, and I think that it's improved for it!

In addition to that, I began work on the pitch email, the message intended to carry and accompany the pitch deck. It essentially provides a brief introduction to the game, a link to the demo, and mention of what aid I'm asking for.

This isn't yet quite done, but I think that I've made good progress!

(One tricky thing that I discovered only last night is that my email provider may stop messages that are too large. As a result of this, I intend to rework the message to use externally-linked images, rather than included in the message, and to link to the pitch deck rather than attach it. This is perhaps not ideal--it's two more steps during which a publisher could decide to not bother--but it seems like the best approach under the circumstances.)

But not all work of the week just past was given to the pitch. The game itself saw some progress, too!

Some of the things done were fairly minor bug-fixes: The key-mapper wasn't binding the minus-key or the mouse scroll-wheel; and in level one the shelf from which the goal-book is taken retained its action-icon after that taking. These, I believe, are fixed!

A piece of feedback indicated that this puzzle was still a little obtuse in its immediate goal, and that perhaps worse, it wasn't clear enough that there was another way of solving it than brute-forcing.

For the first point there, I've extended a character-thought to explicitly mention what the player is searching for.

And for the second, I've implemented a bit of logic that should hopefully detect the player searching close by their most recent successful search, and suggest looking for some other method.

And finally, I finally discovered a solution to a UI issue that's been plaguing the game.

A few people have mentioned that it would be convenient to be able to scroll menus via the mouse-wheel. And I've agreed--that would be a very useful feature!

Unfortunately, Panda3D's GUI system--DirectGUI--makes that somewhat awkward, at least with menus of some complexity.

For a while now I've been uncertain of how I might approach the matter, and slightly worried that the only solution was to manually bind events on every element of the relevant menus.

But in the week just past a solution came to me. In short, I circumvent the GUI system somewhat: I collect mouse-wheel events, then manually check which scrollable-area--if any--the mouse is over. (These areas being manually nominated in my menus.) If one is found, it's scrolled in code.

Having implemented this--with aid from the Panda forum--it seems to work! ^_^

As I believe that I mentioned previously, I'm hoping to update the demo soon, carrying these various post-release changes that I've made. Indeed, I want to do so before sending out my pitch, and perhaps even this week!