Lots of work has been done this month in the graphical and mapping departments of Twisted Insurrection, check out the update for what has been happening the past couple of weeks!

Hello everybody. There has been quite a lot of progress on Twisted Insurrection 0.6 this week so instead of posting individual images per day, I thought I'd round them up into one big update here. Our release date is November 19th 2016, possibly sooner if we finish our to-do-list before then, but it's better to have the extra days for ironing out whatever bugs there may be too. Anyway, without further ado, here's what's been happening lately.

First of all, out of ErastusMercy's, our lead voxel artist, workshop, we have new and complete images for the GloboTech air-force. The new Gunship and Sonic Fighter voxels are complete and scheduled for release. These units were a low priority on the to-do list but now that we have a GloboTech campaign coming up, they moved higher up the ladder! 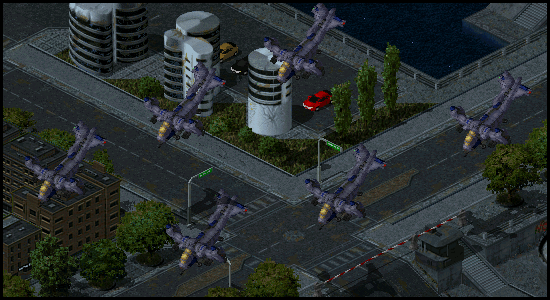 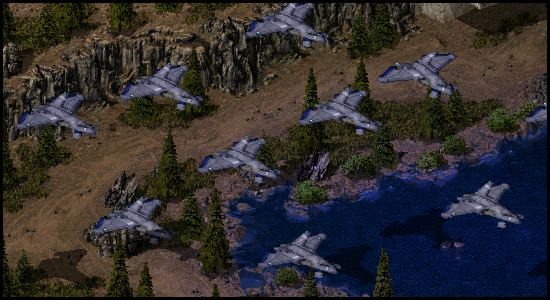 Next up is something I am extremely pleased to be able to put into a post, and that's more Nod Structure artwork reaching completion. TI's Nod Structure artist, Lin Kuei Ominae, has had a surge of motivation and has dished out a new Tiberium Reactor, Laser Turret and Stealth Generator. We have also worked together to improve the Web Spider Fence imagery as the all-remap lasers didn't look all that good, it's also burrowed further into the ground so the illusion of a gap below the fence is no longer there. 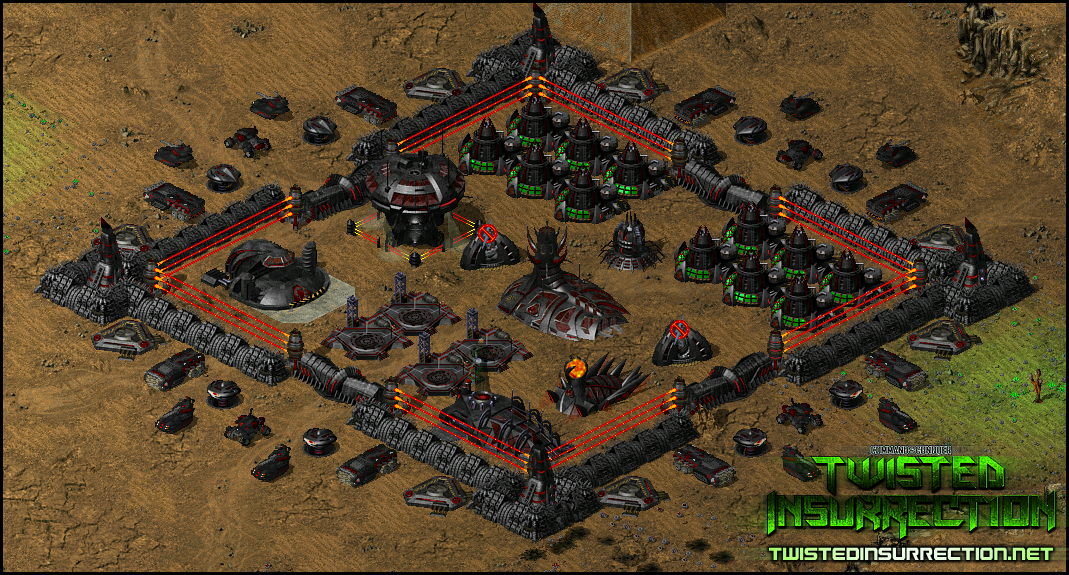 The Stealth Generator view is being obstructed in the image due-to it being powered off, so here is a better look at the structure's animations. You can also get another look at the individual structures, their stats and additional information on the Nod Buildings section of our website.

Next up are some terrain additions and improvements that I have been working on recently. As time goes on, the quality of somebodies work tends to improve, which unfortunately means that work becomes out-dated, primarily in TI's terrain department, so I took the time to improve upon some older pieces. 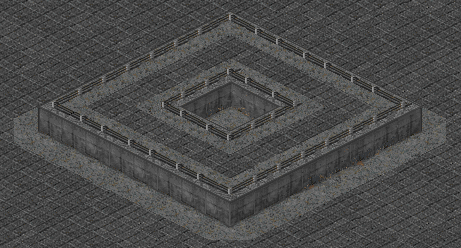 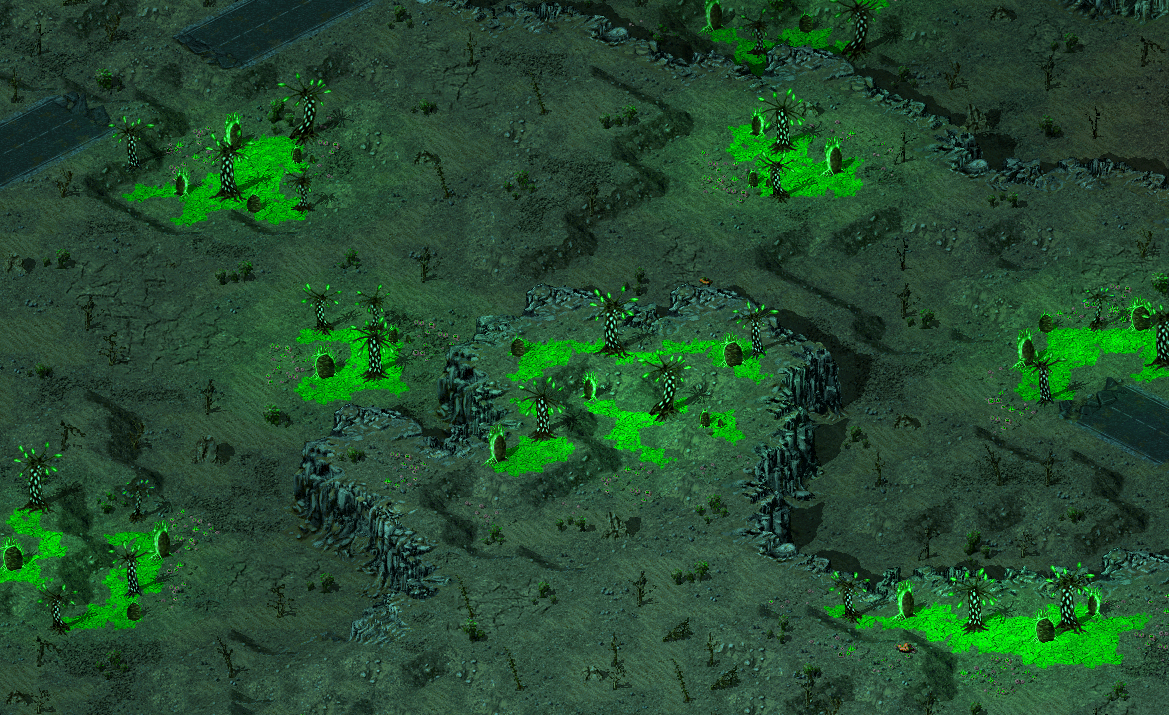 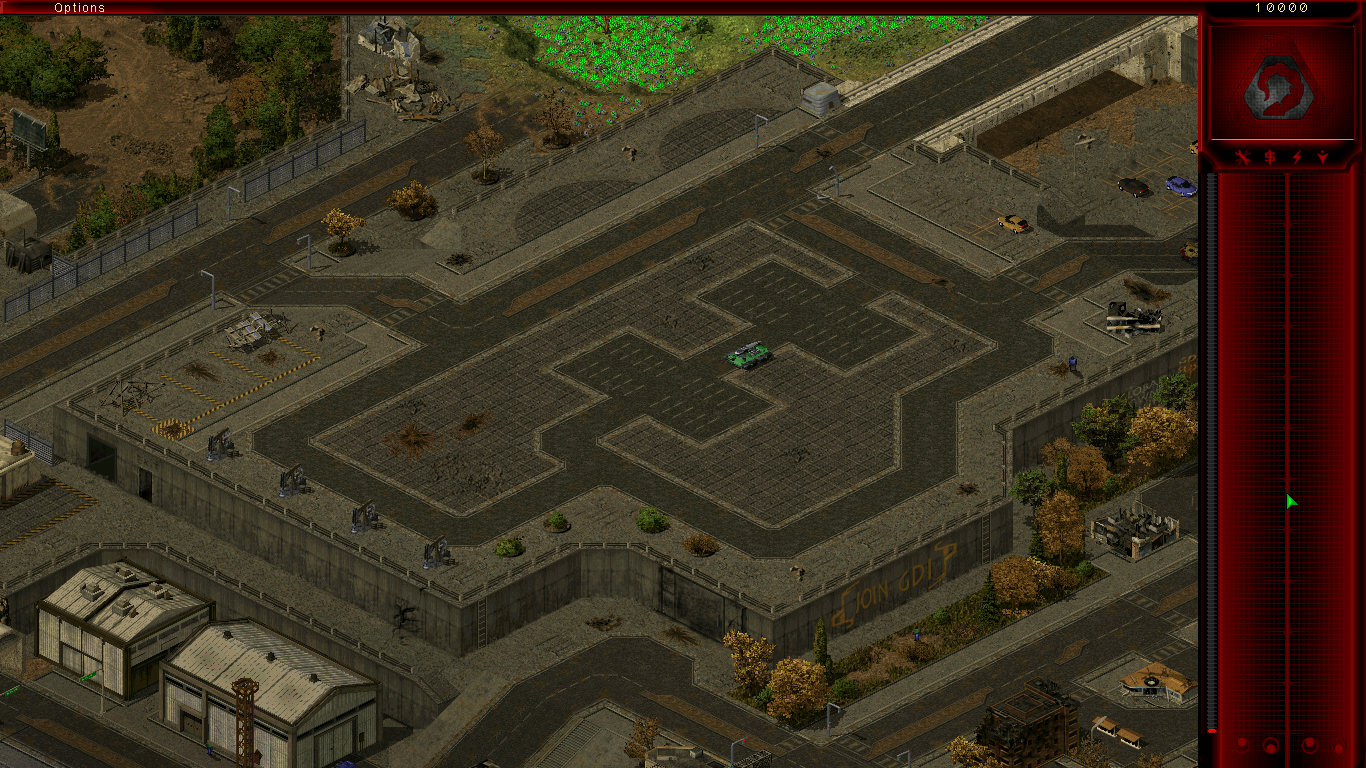 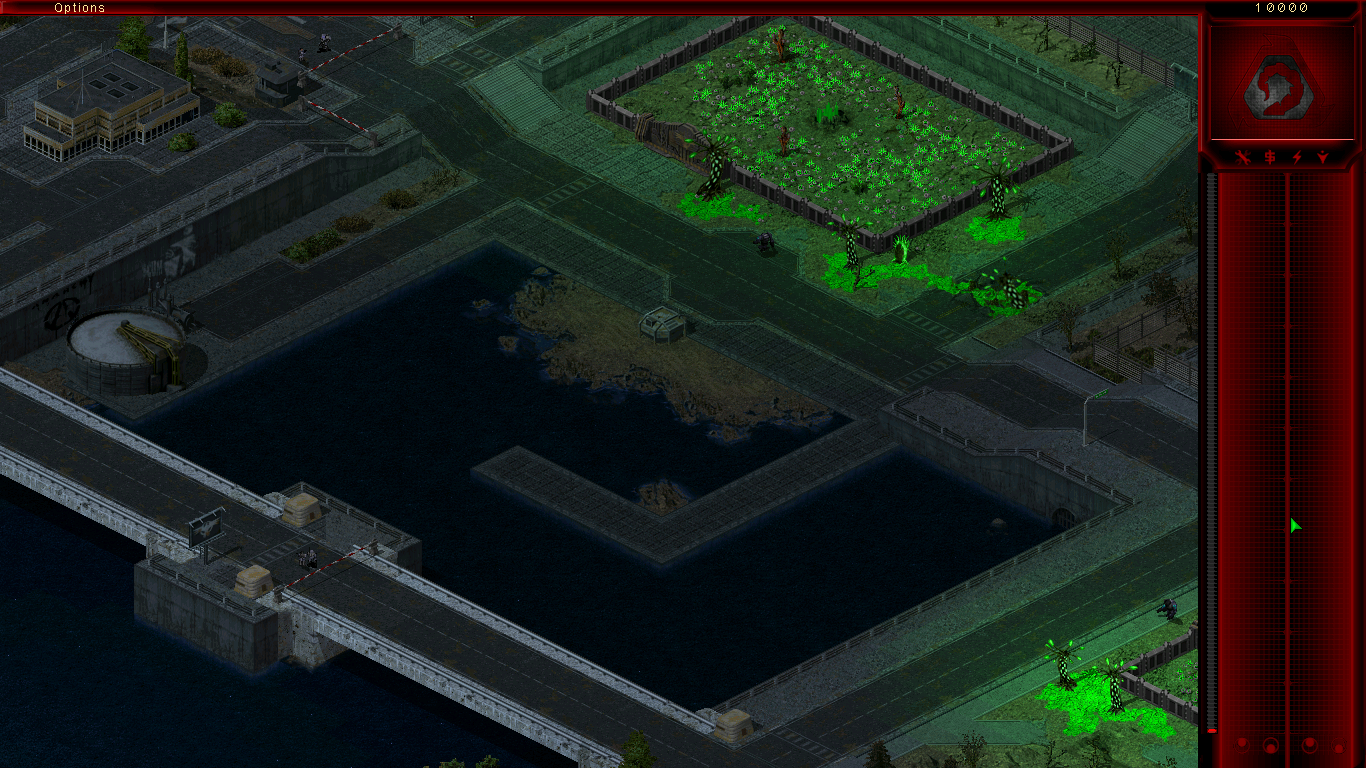 (Click the images to view them in actual size)

We've been working on a few new multiplayer maps too along with improving some of our older ones, some maps have been updated to add the GloboTech Airstrip to them as a capturable structure as there didn't seem to be any outside of the campaign, Pig of Bays and Sunset Vista namely make use of the Airstrip in the next update and there will likely be more to come. Here's a new map by Crimsonum making use of the new grass-land theater we created for the Twisted Dawn timeline.

(Click here to view the map in actual size)

There are a couple of extra things left out of the news post to conserve length such as progress on some GloboTech missions and a new Nod Vulcan Cyborg image (check out the Nod Infantry section of our website), we will showcase more of these as time goes on! So last but not least for this update are some more additions to our Original Soundtrack, check out Eidilon by Mental Omega's Speeder and Prodigal Son by OmegaBolt!

And for those of you that may have missed it before, check out the gameplay trailer we put together for the upcoming release of Version 0.6, even though now some of the graphics are outdated already due-to the surge of progression we've had on the staff forums!

Thank you for taking the time to check out the update and we hoped you enjoyed it. We'll have more to come soon. Nod faction artwork is nearly finished and we'll hopefully manage to get more GDI artwork out of the way soon too! ErastusMercy is working on some improved units too including a new GloboTech Armadillo and a new Nod Hornet, discussing a new image for a new GDI MLRS Tank too as opposed to the walker currently being used.

It's great to see so much progress in art department, and I hope LKO's motivation won't burn out quickly, so the full set will be completed if not for 0.6, then for 0.7 or whatever will come next, except maybe CY because I beleive it will take time to make both the concept and the model for a good looking heart of the base.

The Armadillo and the Walker do indeed look somewhat outdated by current TI quality standards, but I also hope something will be done with Kazuar as well, since it looks way too simple and lacks details. Not sure why you're going to change the Hornet though, it is already good, only the cameo could use some minor changes to fit the ingame look of the unit better.

Thank you for making this great game, it is truly one of the best C&C mods!

I don't think the Mammoth needs anything, it is pretty much detailed and accurate as it is. Scatterpack has plenty of details as well.

I don't think the new power plant quite fits the Nod TI style, as there is not enough specularity. The lasers on the laser fencing needs some transparency on the edges to make them look more, well, laser-y, like with the glass panels that you can see the terrain through on the Hand of Nod. The other structures, however, are god-damn sexy.

I love you new sonic fighter, but, I don't like the new gunship, not to my taste, there's nothing wrong with the workmanship, could you maybe find a place as a transport for the old gunship?

The gunship's shape suggests its main role as a transport, not a flying MG, would be nice if it could carry troops (not sure if possible on this engine though). And while I don't know why the fake rotors have been removed from all the aircraft voxels, I'm starting to think it'd be better with them than without, especially in Gunship's case.

Yh transport capability and weapons on a aircraft equal paradrop ability, but it doesn't look right, I think the new gunship looks more of a gunship, so in that capacity its better, I didn't notice that it is rotor engines, I always wanted the old gunship to be a transport *Looks like a pelican!* function as a Orca Transport, its a shame about rotors in general, it has to be static, I don't think they can even use blinking lights to simulate movement

The gunship was supposed to have rotors actually

During the concepts creation the artist intended for the Gunship to act like an RA2 Nighthawk but didn't know the limitations of the TS engine, meaning GloboTech will require a separate dedicated air transport.

As for the fake rotors, they were removed after Aro received complaints that "they weren't fooling anybody", so I never bothered adding them to this one.
That said, as inelegant a solution the fake rotors were, they at least allowed players to differentiate a helicopter at a glance from some other form of propulsion.

Quite interesting, its quite amazing what you achieve inside the restrictions of this game, maybe the old gunship could have function inside the globotec campaign, as a dedicated transport?

"Our release date is November 19th 2016"
Oh, thank you for a birthday present

I'm getting the most intense feelings of nostalgia here.

Can't wait for the next version, this is one of the best Tiberian Sun mods out there, if not the best.

Fans continuing to work on Mods like this is why C&C will never die. We will keep its legacy alive!